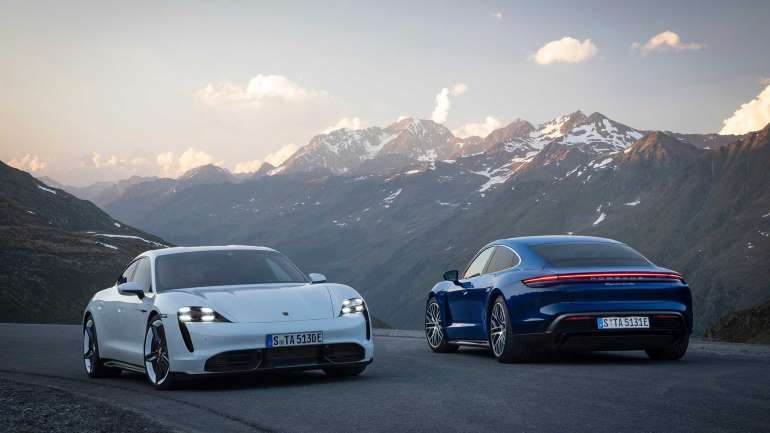 The 2020 Porsche Taycan is Porsche's first-ever electric vehicle. This new Porsche sports sedan has its sights set on Tesla and made its official debut in September.

The new 2020 Porsche Taycan is pivotal step into the high-perform­ance and high-price end of the EV landscape. He is quick, comfortable, and likely to be a serious Tesla contender. The 2020 Taycan (pronounced TIE-kahn) is at least as important to Porsche as the first-generation Cayenne, not in terms of profit, but for reshaping the arc of the company's future vehicles.

The 2020 Porsche Taycan is very nearly the same length as a Tesla Model S. He is 3.4 inches shorter than Porsche Panamera, but it has a substantially lower roofline than either.

For sure, the Tesla certainly deserves credit for doing the very expensive, money-losing research that's proved there's a market for luxury EVs. Newer the less, Porsche had 30,000 orders in hand globally even before the new model of Taycan's public debut.

Electric-vehicle breakthroughs include a much higher operating voltage that enables faster charging as well as the first multispeed EV transaxle. Both of these help facilitate uncharacteristically consistent acceleration performance for an EV.

Porsche will keep traditional naming convention. The names for new models will be:

The interesting fact is that neither of them has a turbocharger.

The Turbo S's numbers are big: 750 horsepower and 774 lb-ft of torque, and a price starting at $186,350. The less expensive, $152,250 Turbo will have 670 horses and 626 lb-ft of torque. The difference between the two is primarily at the front axle, where the S's larger inverter enables more front-motor thrust. You get those outputs for only 2.5 seconds at a time; after that, both models drop to 616 horsepower, which can be maintained for 10 seconds. The Taycan's 162-mph top speed is achieved in top gear at the motors' 16,000-rpm redline. Loaded Porsche Taycan EV Comes to $226,010.

The new Taycan will have rectangular battery pack in the floor, Porsche strategically relocated two of the 33 modules that make up its 93.4-kWh pack to leave space for rear passengers' feet. Other interior tricks include a curved 16.8-inch configurable digital gauge cluster and a 10.9-inch center screen that runs a new infotainment layout, moving to tablet-like squares of selectable functions rather than Porsche's current setup of scrolling menus that we've found frustrating. There's also an optional second screen in front of the passenger, with duplicate functionality for infotainment and navigation. In addition to the typical leather, there's a leather-free option that Porsche calls Race-Tex.

There are two areas where Tesla have advantage comparing with Taycan. Firs to them its lack of sophisticated semi-autonomous driver-assistance technology. There's no official EPA range estimate yet, but the European cycle puts the longest-range Taycan at 280 miles.

Using the Model S's Euro-versus-U.S. fuel-economy figures as our yardstick, we predict the Taycan's highest EPA rating will be somewhere between 260 and 270 miles. It is less if we compare with top Tesla which reach 370 miles.

Turbo S models should fall somewhere between 225 and 250 miles. But the Taycan has a trick up its rear subframe: a two-speed transmission, which, combined with the Taycan's very low 0.22 coefficient of drag, may give it the edge in extended high-speed cruising that's generally a range killer.

At the end, general conclusion is that the new 2020 Porsche  Taycan is a true sports sedan.