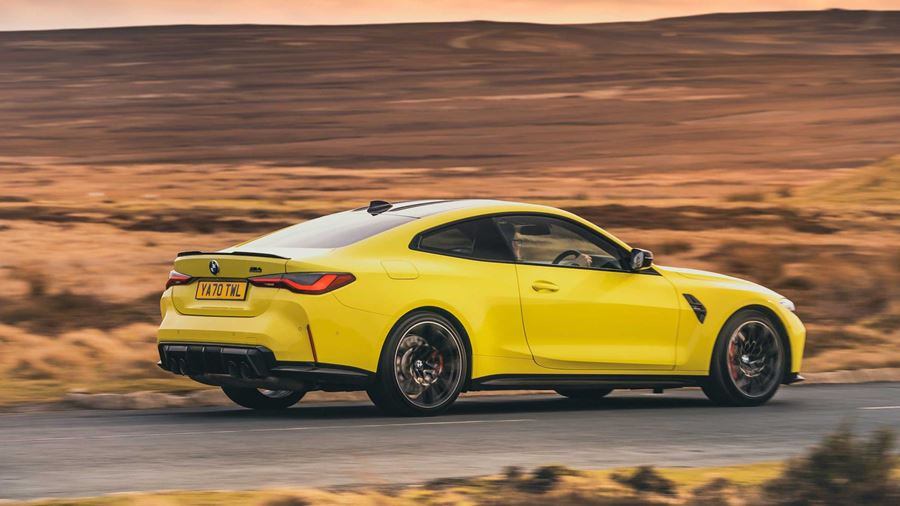 If someone had have told you twenty years ago that the latest BMW M4 (or M3, as it was universally called back then) would have over 500bhp, a choice of all-wheel drive – but no manual gearbox – and styling loud enough to send seasoned M enthusiasts off into the arms of AMG, you’d no doubt wonder what potent blend of super glue they’d been inhaling before bed.

Yet, here we are in 2021 where the crazy proclamations of yesteryear have indeed come true. The G82 version of one of BMW’s most famous names is all of the above. Granted, a six-speed three-pedal version is available elsewhere, but on these shores it’s eight-speed ZF only. And yes, the debate over the styling still rages on. I’ve grown to like it, chiefly because it dares to be different from every copy and paste vanilla car on sale today. But let’s not go down that rabbit hole… 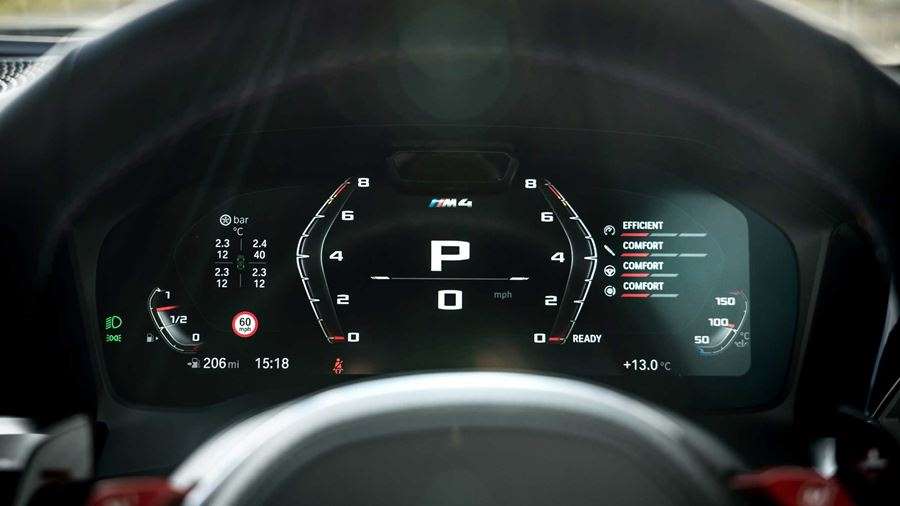 What are the headline figures?
As well as the manual gearbox, UK buyers have also been denied the ‘standard’ car, so it’s Competition only for the G82 and its M3 sibling. That means pre-pumped outputs of 503bhp and 479lb ft of torque – up 59bhp and 73lb ft on the outgoing F82 Competition. Big gains? Quite. But also big dollar, with this latest M4 coming in with a £76,000 asking price (our test car was knocking on for £90k).

0-62mph is done in 3.9 seconds while top speed hits the heady heights of 180mph if you pay the nice people in Munich a little extra for the M Sport Pro Package. It’s a seriously juicy set of stats for a game of Top Trumps, yet the truth is that we’ve come to expect nothing less when one of Germany’s big three releases a flagship performance car. 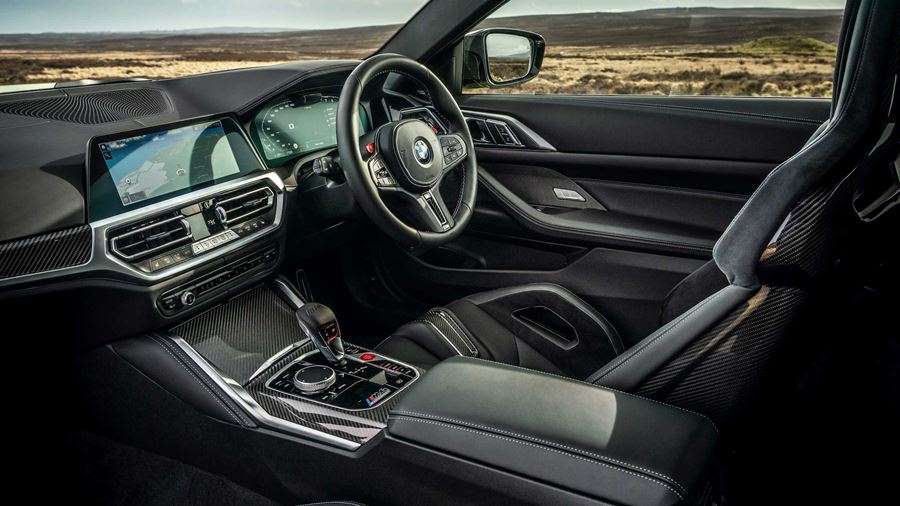 What’s of more importance, is how this M4 serves its power up compared with its predecessor. There’s plenty of tales from drivers who got behind the wheel of early F82s, likening the experience to driving a 400bhp supermarket trolly. You were never quite sure what it was going to do next and as a result, it felt like it was trying to spit you off into the nearest hedge.

Happily, things have since moved forward and BMW’s engineers have smoothed out the torque delivery in the S58 engine. It comes in from almost 1,000 revs later, and there’s a far more linear curve as it hauls through the mid-range leaving Porsche 911 Carreras in its wake. Catch it below 2,500rpm and you’ll detect tangible lag, yet it’s fleeting and insignificant compared with the sheer breadth of pulling power on offer. 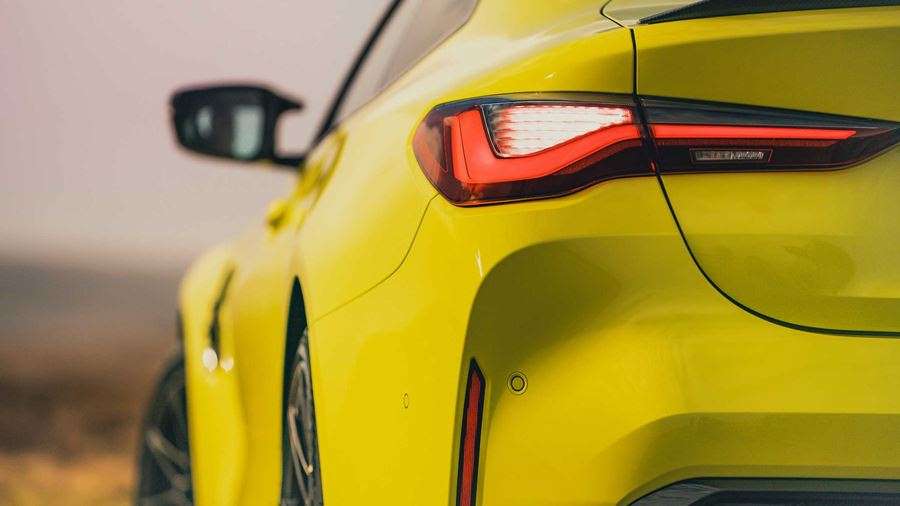 It’s a level of flexibility that would scarcely have been believable not so long ago, yet the M4’s engine delivers at both ends of the scale. Almost as soon as the torque dies down, the endearingly frantic top end takes over and gives you just enough encouragement to ring out those final few revs before pulling the upshift paddle at 7,600rpm. If it wasn’t already clear, this is a blisteringly quick car.

BMW’s done a decent job with the sound, too. No doubt it’s synthesised, yet there’s enough going on, not just from the electronically controlled exhaust flaps, but the engine itself, to mean it should be slightly less controversial than the tones of its S55 predecessor. 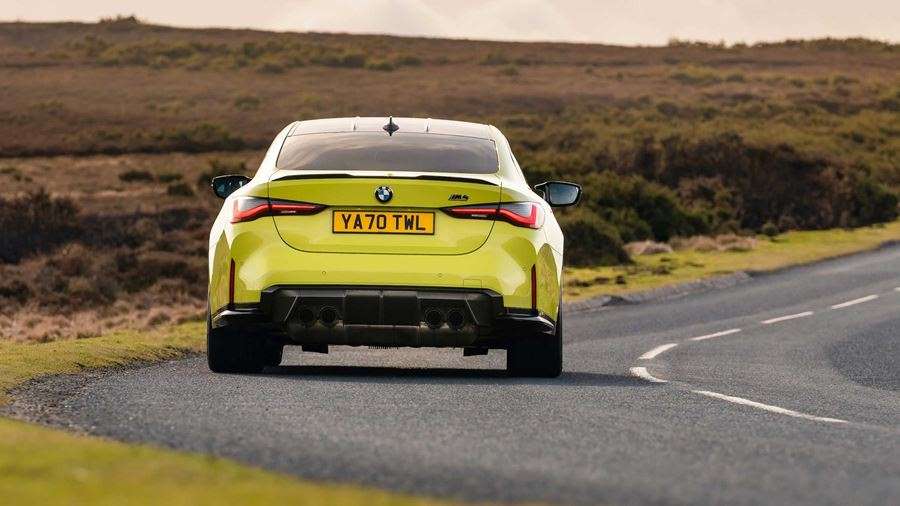 It’s a real shame, then, that the eight-speed gearbox can’t doesn’t feel as confident as the rest of the powertrain. Everyday driving shows off its greatest strength of smooth, slick, well-timed changes, yet start to drive enthusiastically and the downshifts are underwhelming. There’s not the same level of decisiveness or aggression as Porsche’s PDK, for example, and despite the number of ratios being the same, each gear feels less distinctive.

What about the handling?
Before I get into that, it’s worth highlighting that most of my time in the M4 was spent on track with the optional Michelin Pilot Sport Cup 2 tyres, rather than the standard Pilot Sport 4S. I did have an on-road drive with the latter, but the following impressions will – largely – be based on my experience with the super sticky track tyres.

Although, a quick glance through the spec sheet and you might question whether the M4 Competition should be going anywhere near a track. Because, under the colossal power and torque figures you’ll see a kerb weight in excess of 1.7-tonnes, that, by the way, is almost 200kg more than a similarly specced F82 M4 Competition 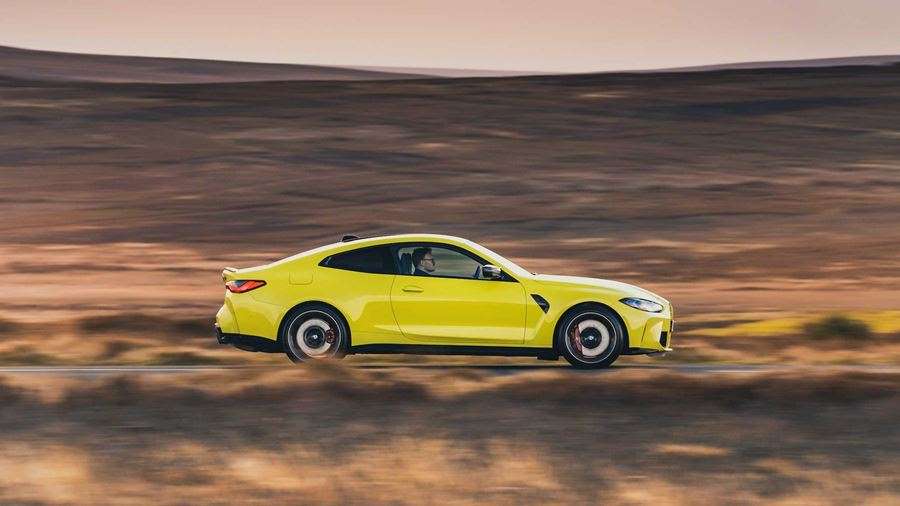 Why so hefty? Partly, it’s down to the increased reinforcement on the part-steel, part-aluminium CLAR platform. Braces to lock the front shock towers firmly to each other and the front bulkhead, elements to tie the stiffer subframe to the reinforced engine bay, underfloor shear panels – all of this in an effort to remove variables from the M4’s chassis.

And yet in truth, such weight gains feel like they’re there mostly because BMW knows it’s not the stigma it once was and that the average M4 customer still wants, no – scratch that, demands the creature comforts of a regular 4 regardless of the car’s sporting intentions. As a consequence, BMW has become the master of making its cars not necessarily hide weight (there’s only so far you can take that), but instead, work with the weight.

Like the F90 M5, the M4 Competition moves around tight corners on track (and on road), with a degree of agility that, not so long ago, wouldn’t have been out of place on the grid for the Nürburgring 24H. Wider, longer and tauter than its predecessor, it can take even greater speed into corners with the front-end that actively hunting down apexes given a little trail-braking encouragement. BMW’s engineers benchmarked the car against the previous M4 CS – and it shows.

It’s especially effective in tight and medium-speed corners where there’s enough attitude from the rear to punch you away from the throes of understeer, keeping the line tight and the speed high. Sure, the front will still push wide if you’re not decisive enough on the throttle, but it doesn’t take long to get used to its pleasingly direct way of doing things.

And yet, that doesn’t mean that the M4 always plays nice. As mentioned, the engine is a much more tractable unit than before, but there’s still a sharpness, borderline nervouness to the car at the limit, that hints at the barely concealed aggression underneath. Big slides are possible – even encouraged – with the gimmicky but fun M Drift Analyser, yet it’s the transition from traction to no traction that leaves you a little unsure of where you stand. Although, as explained, much of this could have been down to the less forgiving Cup 2 tyres.

Either way, there’s no doubt more precise tools available for similar money. And while I don’t want to get too fixated on the 911, it certainly is one of them. The steering in the BMW, for example, is light and fast. Handy for the slower corners, but less helpful for delivering feel and stability in the faster stuff. Plus, the standard brakes, as powerful as they are still have their work cut out to bring 1.7 tonnes to a halt in a brisk and controlled manner. As a result, the M4 Competition is a car that’ll make you sweat, swear and question your own sense of self-preservation on a committed drive.

Which makes it all the more impressive that its capable of settling down into an exemplary everyday car with almost GT levels of refinement. The adaptive M suspension with electronically controlled dampers does a fine job of keeping the car level in sport plus settings, but the well-rounded ride in comfort mode is equally impressive.

As is the cabin layout, infotainment and optional Clubsport carbon bucket seats. A £3,000 option, they save a mere 9.6kg, yet sit you lower and more comfortably in the car. Admittedly, I still wanted to go down a few mms further, and if I’m being picky, the steering wheel rim is too thick. Yet there’s no doubt it’s an exceptionally nice cabin to spend time in.

The BMW M4 Compeition manages to be both an accomplished all-rounder and a flawed, yet brilliantly exciting sports coupe all at the same time. It’s everyday on-road manners and luxuriously appointed cabin are almost beyond reproach. Yet start to press on the and the wave of seemingly limitless power and torque, combined with a veracious appetite for on-the-limit brinkmanship makes it a heart-stopping streetfighter of a sports coupe. And while it may not have the dynamic finesse of the 911 that its now priced so closely with, there’s more than enough reason to drop £80k on one of Munich’s most radical and controversial M cars yet.