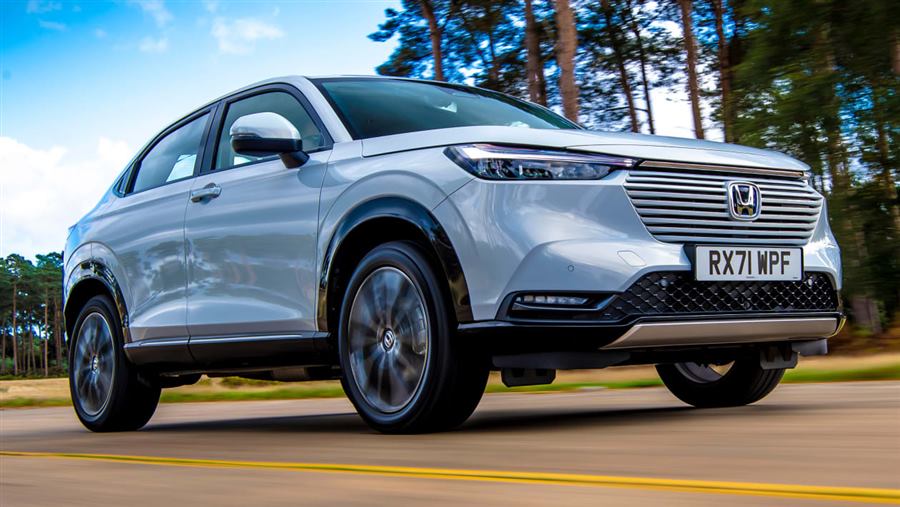 Ingeniously practical, well-built and impressively frugal, the HR-V ticks many of the compact SUV boxes. Our time driving in the UK has put to bed question marks over fuel efficiency - few cars in this class can offer the HR-V’s potential. It even drives smartly too, although it isn’t quite class-leading in any one area. Unfortunately, it doesn’t deliver enough to justify its relatively high retail price compared with some key rivals. Still, it’s the most convincing family car Honda has produced in years.

Back in the late nineties Honda dubbed its first-generation HR-V “The Joy Machine”, and now into its third iteration, this new compact family SUV will need to leave us grinning from ear to ear if it’s to topple rivals like the Toyota Yaris Cross, Renault Captur and Ford Puma from the top of a fiercely competitive crossover class.

Our first encounter on German roads in left-hand drive form showed that there’s plenty to like, but the HR-V didn’t live up to Honda’s promise of class-leading fuel efficiency from its hybrid powertrain.

Step inside and the driver is presented with a neat, uncluttered environment. Build quality is excellent and feels as plush as anything else in the class. It’s backed up by Honda’s latest infotainment system, which is lightyears ahead of what the previous HR-V was lumbered with. 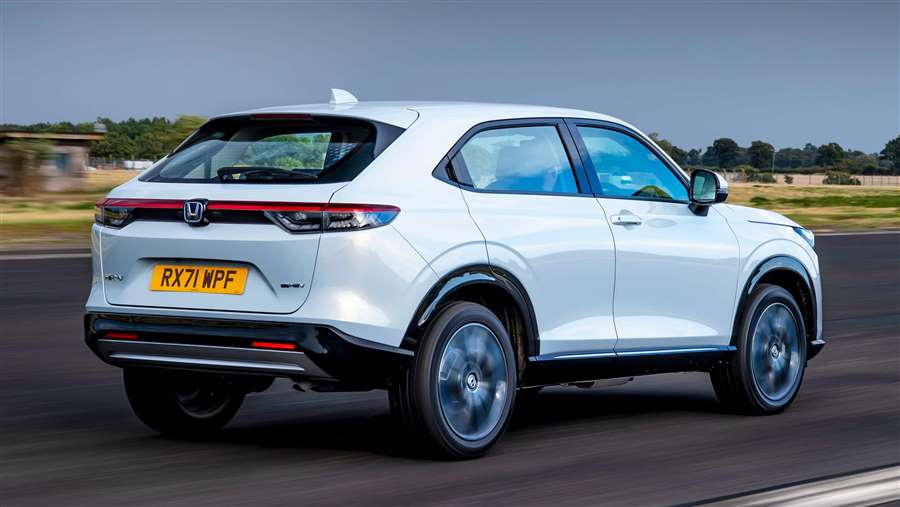 It’s towards the back where the really smart stuff starts, though. Overall knee room is up by 35mm, and in this area the HR-V measures up very strongly against its rivals. It’s just a shame that the boot is relatively pokey - the 319 litres on offer is disappointing. It does make up for this slightly with Honda’s ‘Magic Seats’ though. These not only fold forward, but the seat bases can also flip upward, which is ideal for carrying taller items.

This is made possible by the way that Honda’s engineers have packaged the fuel tank; it’s slotted beneath the front seats, as opposed to beneath the rear bench as in most cars. It’s partly because the HR-V uses a full hybrid, too.

On paper, the HR-V’s petrol/electric set-up is clever. Under the bonnet sits a 1.5-litre petrol engine, but for the most part this only serves to act as a generator for the battery and motor. In fully electric this motor/generator can be decoupled altogether, while under hard acceleration its energy isn’t transferred through a gearbox, but as a direct drive - again, in the name of efficiency.

If this sounds familiar, then it is; this set-up is very similar to that used by the Jazz supermini. It offers more here, though; the petrol engine gets a power boost (up 9bhp to 106bhp) while the battery is more compact but also 25 per cent more energy dense; the the overall output stands at129bhp. 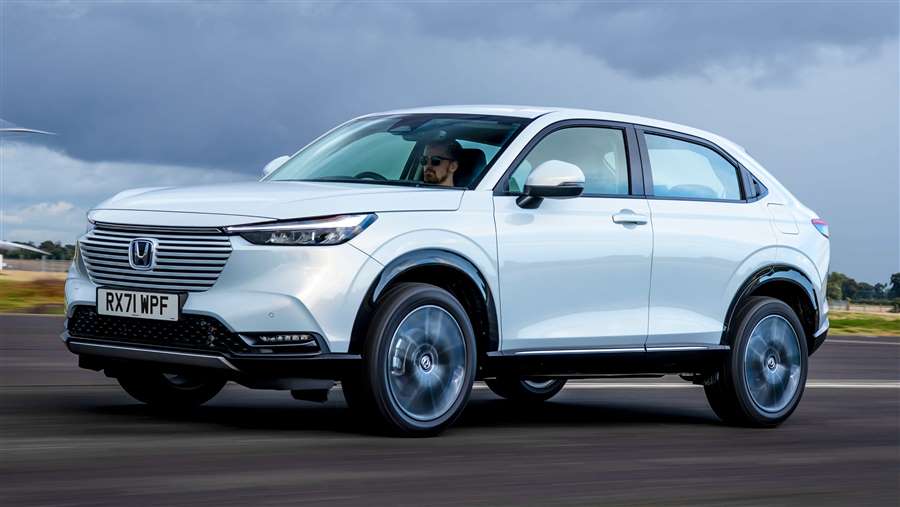 In some ways, it feels like a fully electric vehicle. Moving off from a standstill is silky smooth, but increase the speed further and we were left wishing for more pep from the electric motors. Accelerate onto a motorway slip road, for example, and that initial electric boost has little influence - instead, you’re left waiting for the engine to wake up, and the drive systems figure out how to most effectively deploy its power to the road. The delay here is similar to that of a standard automatic transmission kicking down - only it’s accompanied by a flare of droning revs from the 1.5-litre unit. This only happens under hard acceleration though; for the most part it’s fairly peaceful.

The rest of the drive is impressive, if not game-changing. It’s stable and secure through the corners rather than fun like a Ford Puma. The steering is precise and well weighted, but the extra assistance some rivals offer around town make them easier to manoeuvre. Some low-speed fidget aside, the ride is comfortable, though there is slightly more road noise than we’d have liked. 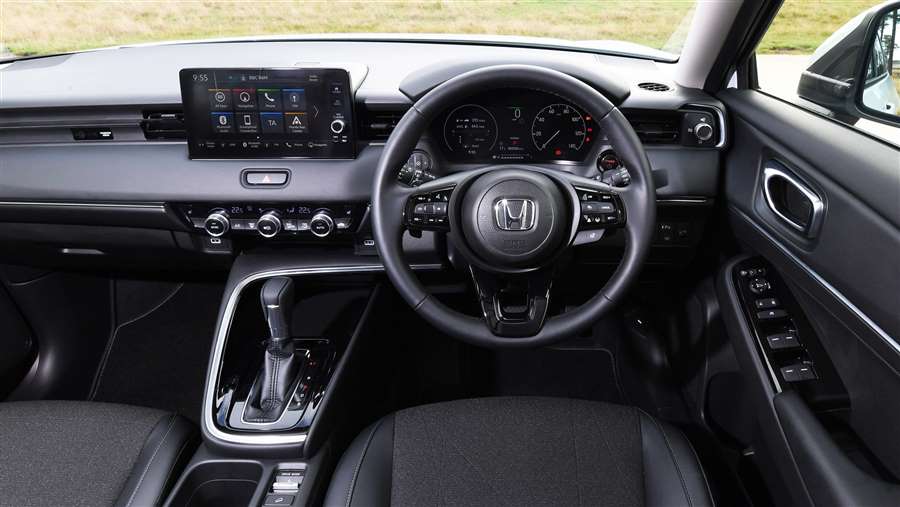 But for all the engine's slightly unnatural noises and slightly dull throttle response, on our first encounter we were left somewhat baffled by a car which struggled to hit 45mpg. On this occasion, the HR-V managed to match its claims - and then some. We regularly saw in excess of the official 52.3mpg figure, reaching over 60mpg in mixed use, which is impressive and towards the top of the class.

Unfortunately, it’s also at the pricey end of that sector too, starting from £26,960. To counter this, the HR-V is well equipped across all three trim levels. The base model Elegance gets 18-inch alloy wheels as standard, plus LED headlights, digital dials, heated front seats, and a nine-inch touchscreen with a reversing camera.

Above that sits this Advance trim, which is predicted to make up 60 per cent of HR-V sales. Among its extras are a hands free tailgate and dual-zone air-conditioning, but the price climbs to £29,210. The range tops out with the Advance Style, which for £31,660 introduces a contrasting roof finish, wireless smartphone charging and a premium hi-fi.