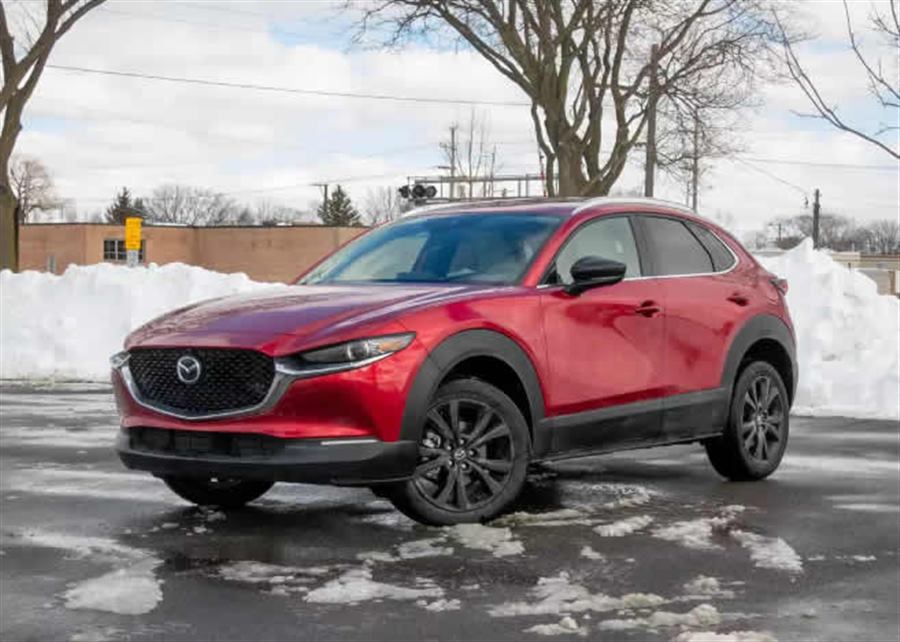 The verdict: The 2021 Mazda CX-30 is refined in many ways, and a new turbocharged engine option elevates it as a value alternative to many entry-level luxury SUVs. Beyond that, it lacks too many commonsense attributes for mass-market appeal.

Versus the competition: Upscale and fun to drive even if you don’t get the new turbo engine — and legitimately quick if you do — the CX-30 will deservedly find its loyalists. But many mass-market competitors have simpler controls, softer rides and roomier cabins. 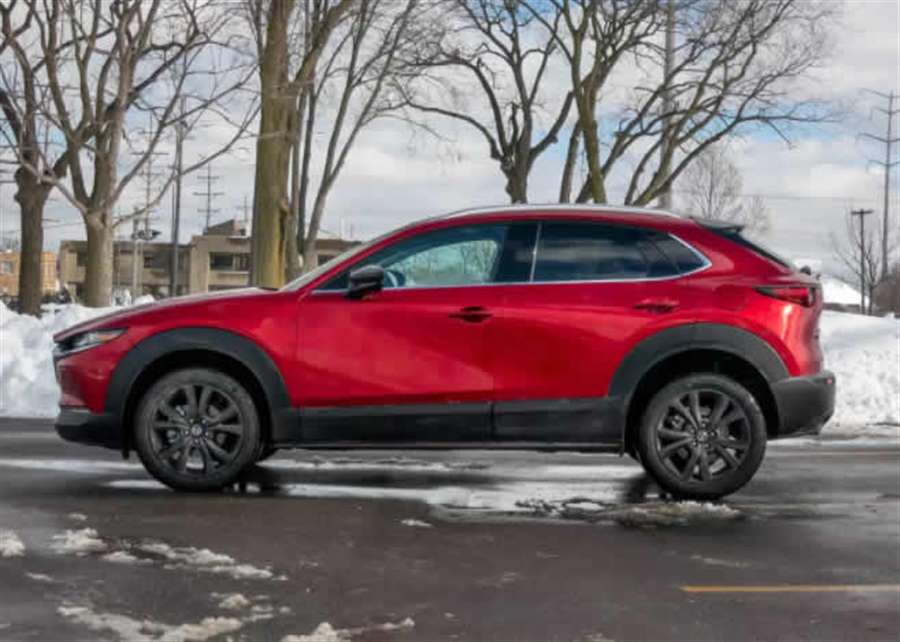 Based on the current-generation Mazda3 sedan and hatchback, the CX-30 enters its second model year for 2021 as a more viable alternative to the too-small Mazda CX-3 SUV. It comes in seven trim levels with front- or all-wheel drive and two available engines; stack them up or compare the 2020 and 2021 models. We evaluated a well-optioned turbo model for 2021, but I’ll mix in some impressions from the base-engine 2020 CX-30 that we tested in Cars.com’s recent Affordable Small SUV Challenge, where I served as a judge.

The CX-30’s third-place finish out of four SUVs in the comparison test tells much of the tale: Mazda’s small SUV drew top scores in some areas but bottom marks in others, with very little about it evoking neutral reactions. One model year later, Mazda plopped in a newly optional turbocharged four-cylinder, which matches the character of its carryover base engine: refined, steady power — just more of it. The fun’s been turned up, but the flaws live on. 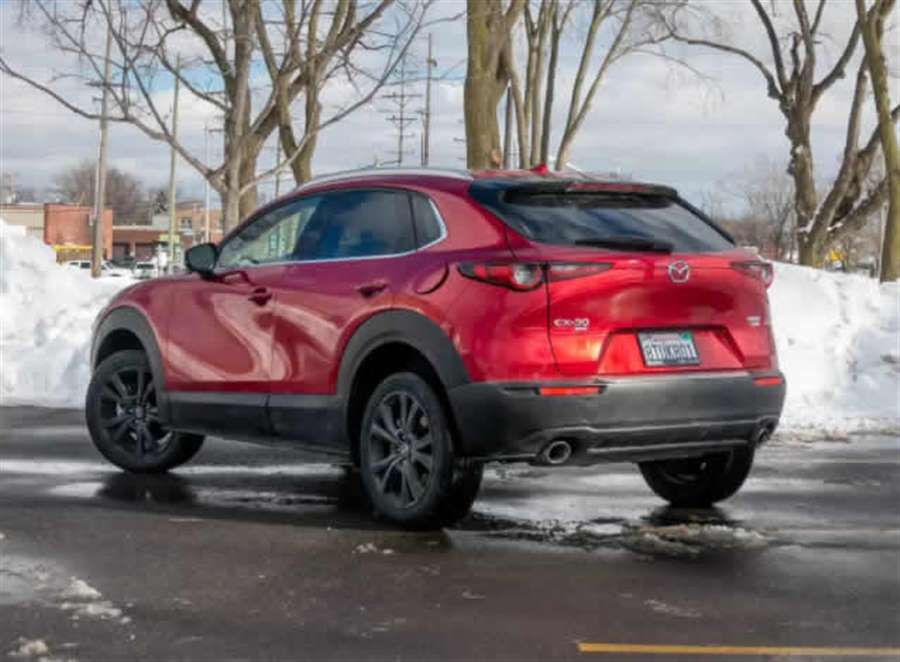 Refined Engines
In a field where pint-sized engines, many of them turbocharged, can lend tentative acceleration, the CX-30 is an old-school breath of fresh air. Its base engine, Mazda’s refined 2.5-liter four-cylinder (186 horsepower, 186 pounds-feet of torque) provides smooth if unspectacular power: sufficient from a start, with linear revving through any sustained on-ramp charge. It pairs with a six-speed automatic transmission whose tall gearing works against such drawn-out spurts — a disadvantage on paper, where rivals’ eight- or nine-speed units can make for shorter passing gears without diminishing fuel economy. But the six-speed earns its keep if you need more power while already in motion because downshifts are both decisive and immediate when you press the gas, an exercise many eight- and nine-speed automatics butcher.

Our comparison test exemplified how this plays out. We clocked a 2020 CX-30 with the 2.5-liter engine and AWD at a pedestrian 8.92 seconds to 60 mph, third slowest among four models (the others being a Chevrolet Trailblazer, Kia Seltos and Subaru Crosstrek, all with top available engines). Despite that, the CX-30 earned the group’s highest scores from our judges for overall powertrain impressions. Credit its consistent power delivery, which belies any absolute performance metric. 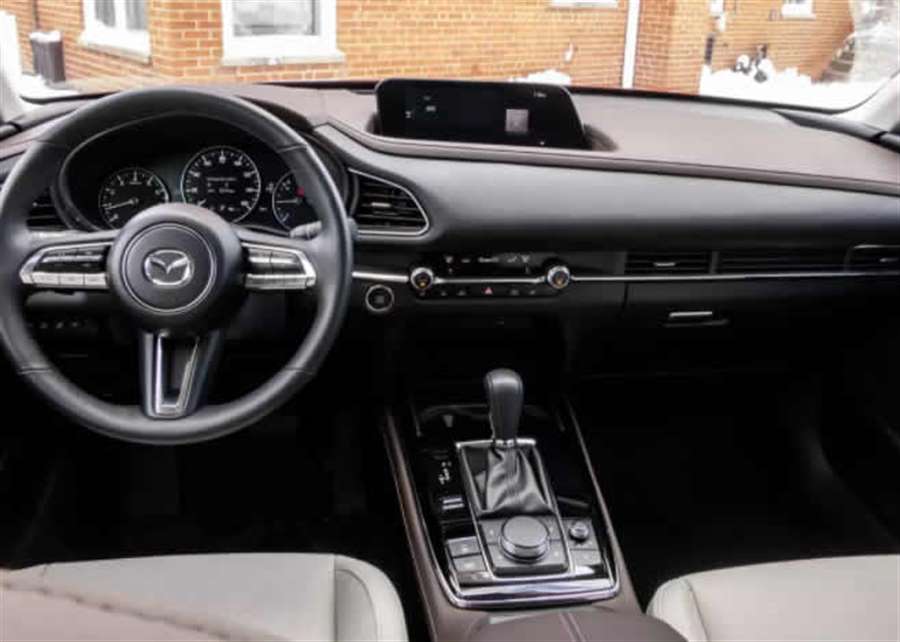 New for 2021 is Mazda’s turbocharged 2.5-liter engine, available only with AWD. It can run on regular gas but makes 250 hp and 320 pounds-feet of torque on 93-octane premium fuel, which our test car employed. (On 87-octane regular fuel, ratings for the turbo 2.5-liter drop to 227 hp and 310 pounds-feet of torque; the non-turbo 2.5-liter makes its output with either fuel.) Though significantly quicker past 2,500 rpm or so, the turbocharged four-cylinder’s power profile is similar to its non-turbo sibling — which is to say linear, building power over the full breadth of available engine rpm. Gearing remains tall, but the extra power makes the late upshifts less noticeable. And all the while, it’s gratifyingly quick.

The CX-30’s EPA-estimated fuel economy ranges from 25 to 28 mpg combined, depending on drivetrain. Versus a selection of mass-market rivals, the 2.5-liter falls a little short. Versus some entry-luxury models, whose interiors the CX-30’s top trims rival, the turbocharged CX-30 compares better.

Handling and Ride Comfort
Turbocharged or not, the CX-30’s reflexes are similar to the Mazda3 on which it’s based. Limited body roll, excellent steering feedback and surefooted brakes make the CX-30 a deft ally on winding roads. Wet conditions and temperatures in the 30s stymied our test car’s Bridgestone Turanza P215/55R18 all-season tires, which struggled on cloverleaf interchanges to hold course. Our CX-30 in the 2020 comparison had the same tires in better testing conditions, and we observed notable slippage there, as well. Wider or stickier tires might help — but if the CX-30’s rubber is the weak link on handling, it’s a mild one.

All that fun sacrifices ride comfort. Like the Mazda3, the CX-30 exhibits good overall straight-line composure, free of excess body movement on uneven surfaces; in this regard, it emulates a few entry-level luxury SUVs. But suspension tuning is unabashedly firm. The CX-30 exhibits a degree of impact harshness absent in many competitors, especially mass-market rivals like the Crosstrek and Nissan Rogue Sport — enough to turn off many shoppers who just want a smoother rider. 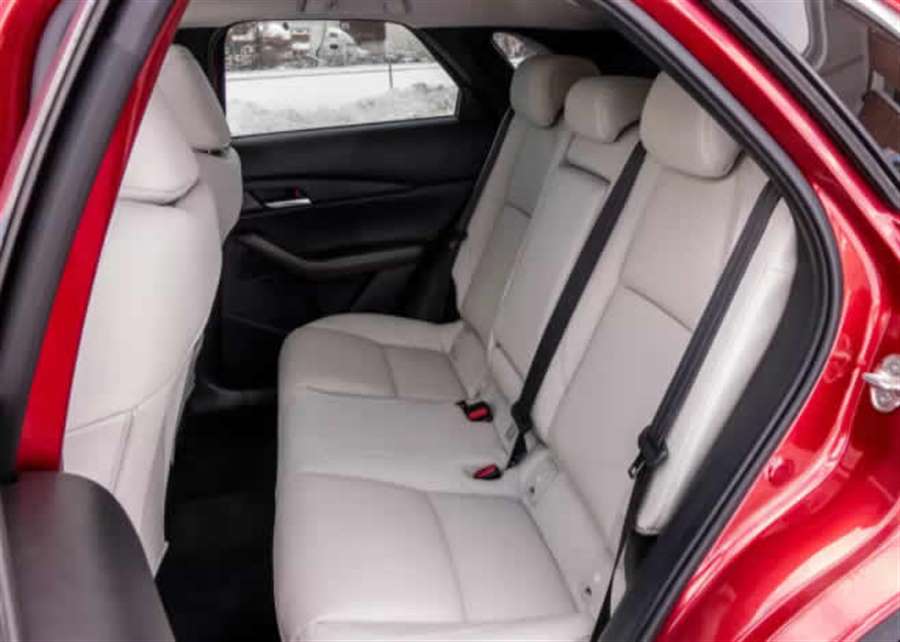 The Interior: Quality Over Quantity
For the most part, interior quality is strong. Controls boast meticulous detailing and operation, and most surfaces above knee level have consistent, low-gloss finishes. The CX-30’s optional leather seating surfaces are free of any obvious stretches of vinyl, and premium touches like universal one-touch windows hint at luxury territory. It’s not all excellent: A cheap headliner and some obvious cost-cutting in the backseat bring the CX-30 back to earth. By and large, though, this is a clear step above the SUV’s mass-market rivals. In our 2020 comparison, Mazda earned the highest interior quality scores by a clear margin, and in that regard may have fared well against SUVs priced far higher.

Despite that, interior quantity is marginal even if this is a larger alternative to the CX-3. The smallish backseat is ill-equipped to handle taller adults or even children in rear-facing car seats. Not only did it rank last in our comparison’s rear seats category, but it couldn’t fit Cars.com’s rear-facing child-safety seats without needing to move the front passenger seat so far forward that it may pose a safety risk for some adults seated there.

Even those who don’t plan to carry anyone in back often — children or otherwise — might find the CX-30’s confines, well, confining. The front seats have good sliding range but a narrow berth that could leave long-legged drivers feeling pinched. And as the CX-30’s relatively low-slung profile suggests, the driving position isn’t as high as you might expect of a conventional SUV. By our measuring tape, the CX-30’s driving position towers nearly half a foot above that of the low-riding Mazda3, but it trails the Seltos by roughly as much.

What’s more, the CX-30’s limited in-cabin storage and poor sight lines — especially out the rear window — are liabilities versus more utilitarian rivals; Mazda placed last in both categories (tied with the Crosstrek for storage) in our comparison. Cargo space, at 13.7 cubic feet by Cars.com’s independent testing, is a smidge above the Mazda3 hatchback (13.1 cubic feet, also by our accounting) and in the same neighborhood as the Trailblazer and Crosstrek, though the whole group falls well short of the Seltos’ as-tested 16.2 cubic feet.

Multimedia and Safety Technology
With the current-generation Mazda3 and now the CX-30, Mazda took a wayward turn on multimedia. No longer does the dashboard screen function as a touchscreen — even when the vehicle is stopped, as earlier iterations once did. It’s now a touch-free 8.8-inch display perched high atop the dashboard, controlled exclusively by a control knob and a few shortcut buttons on the center console. The setup especially stumps the CX-30’s standard Apple CarPlay and Android Auto integration, as both work best through a straightforward touchscreen.

Standard safety features include automatic emergency braking with pedestrian detection, lane departure warning with steering intervention and (impressively) adaptive cruise control down to a stop. The automatic braking passed third-party testing by the Insurance Information for Highway Safety, cementing the CX-30’s top scores across a battery of IIHS tests to earn the SUV a 2020 Top Safety Pick Plus award. (The award is likely to carry over for 2021, as the agency told us it has no plans to change criteria for the new calendar year.)

New for 2021, the CX-30 offers rear automatic braking, and top trim levels have new hands-on lane-centering steering by way of a feature called Traffic Jam Assist. Alas, TJA works only at speeds of 0-40 mph — a ceiling no longer imposed by most lane-centering systems available these days, regardless of price.

Should You Buy a CX-30?
Including destination, the CX-30 runs from just over $23,000 to about $36,000, a spread that overlaps a host of subcompact and compact SUVs to top out at the shores of the entry-luxury crowd. As a value alternative to the latter group, a CX-30 Turbo might justify itself; as a choice for driving fun among the mass-market models, a 2.5-liter example could also make sense. Given that the SUV ranks as Mazda’s second-best-selling model overall, it’s made the case to enough shoppers so far.

But larger market acceptance (the Crosstrek, for example, is three times more popular) will require a mainstream overhaul — a softer ride, bigger backseat, better visibility, simpler multimedia controls. As it stands, the normally aspirated CX-30 ranked in the bottom half of our 2020 comparison, and not for lack of quality or driving fun. With an infusion of high-end turbocharged trim levels, Mazda doubled down on everything we like, and it’s sure to get the CX-30 a cult following. But for all its remaining thorns, many mainstream shoppers may yet tune this Mazda out.