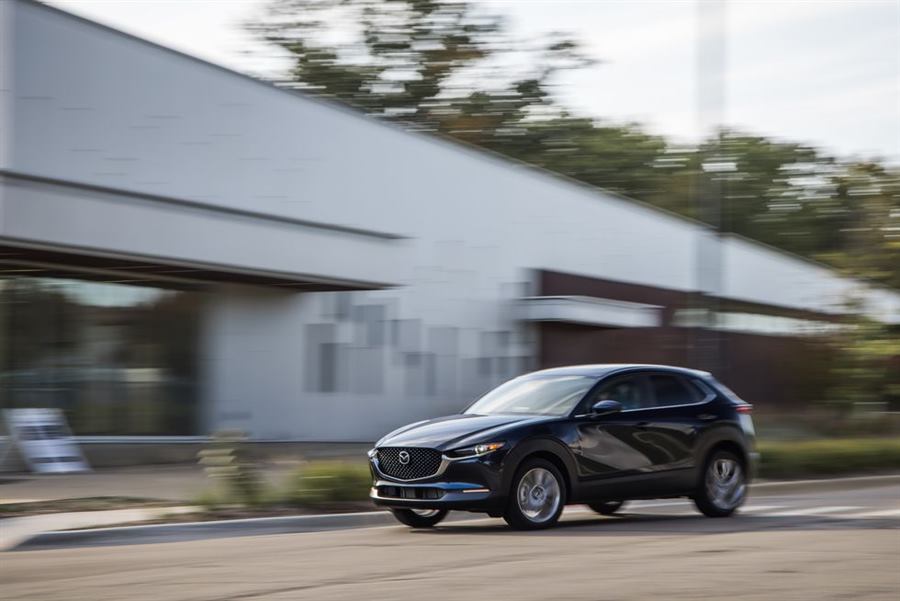 Our 2021 Mazda CX-30 Impresses at a Leisurely Pace

Save for a misplaced plastic bucket in the middle of a highway, the first 10,000 miles with our Mazda CX-30 have been uneventful and about what we expected. We'll get to the bucket in a minute, but first let's talk about our initial thoughts on the CX-30—one specific to its segment, the other to the car itself.

As we see it, most small crossovers would work better as cars. In the case of the CX-30, the car it could be already exists: the Mazda 3 hatchback. But subcompact SUVs are popular, so Mazda created the CX-30, debuted it for the 2020 model year, and watched it sell more units than every other vehicle in its lineup except for the one-size-up CX-5. That pace hasn't changed this year. Through April, the CX-30 outsold both the Mazda 3 and the slightly smaller CX-3 crossover combined. 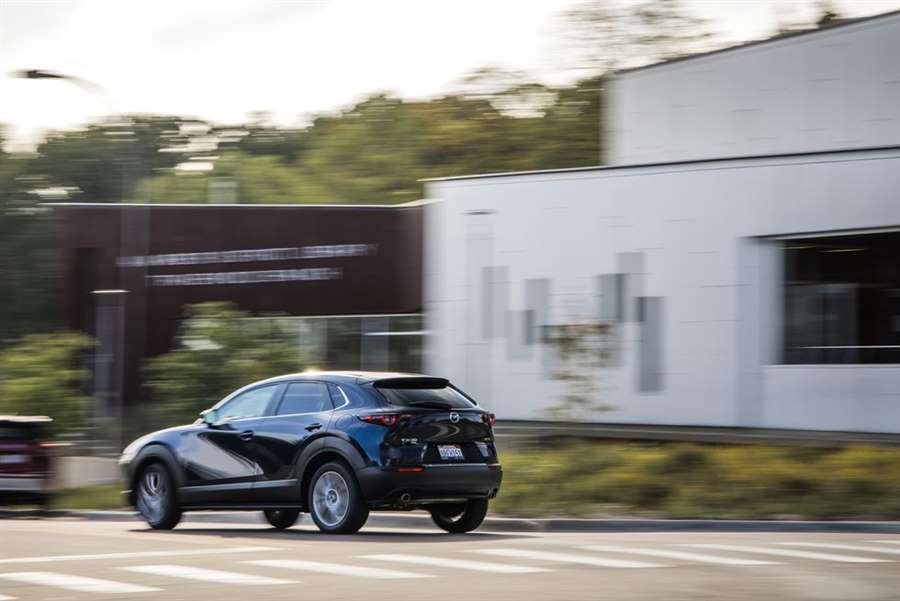 The only real change to the CX-30 for 2021 is the addition of an optional turbocharged 2.5-liter inline-four that produces 250 horsepower. Our long-term test car doesn't have that engine and, as we could have predicted, the Turbo model changes the SUV's math. In our testing, the boosted engine gets the CX-30 to 60 mph in 5.8 seconds versus 7.6 for our example with the standard 186-hp four. Just as noteworthy is the 1.1 seconds that the turbo engine lops off the regular CX-30's 50-to-70-mph time, which makes it far wieldier during passing maneuvers.

"Having spent a lot of time in the turbo version, not having the extra power really sucks the upscale vibe out of this thing," senior online editor Mike Sutton wrote in our CX-30's logbook. "It's quick and responsive enough, though. Good, linear steering and nice general body control. A good driver, but the same goes for the 3 hatch." 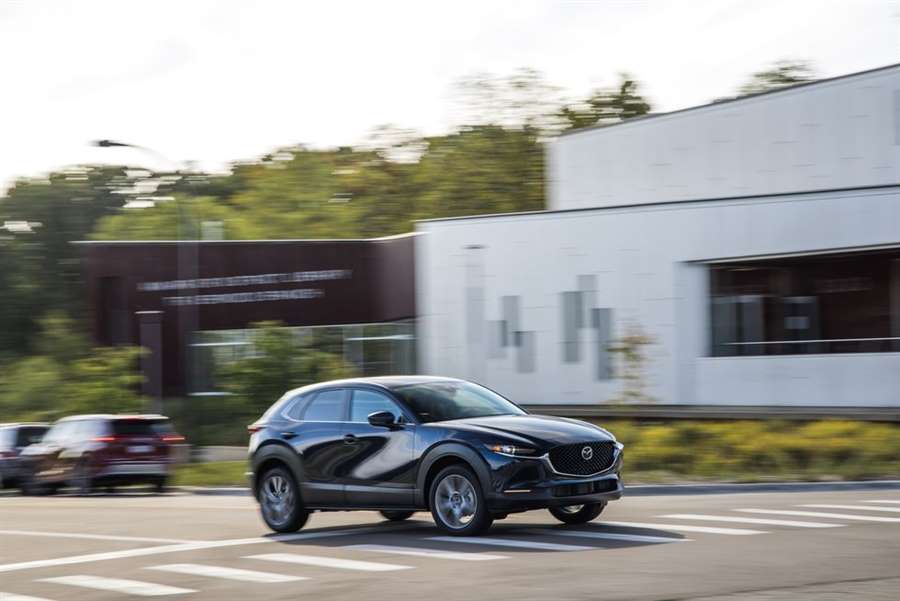 For C/D staffers less encumbered by seat time in the turbo, however, our regular CX-30 has quietly impressed as it's trekked up, down, and across Michigan. It hasn't left the state yet, but it's averaging a decent 27 mpg—1 mpg more than its EPA combined estimate—and summer road-trip season is nearly upon us.

Staff editor Eric Stafford took the CX-30 and his skepticism—"I haven't been a fan," he prefaced—on a nearly 2000-mile jaunt through Michigan's Upper Peninsula. He came away calling the vehicle "classy, sporty, and well equipped." The CX-30's 20 cubic feet of cargo space was sufficient for his needs, and he found enough back-seat room for adults. "While the 2.5-liter is gruff when pressed, it's plenty potent and operates quietly enough in normal driving," he wrote. Indeed, our Mazda's 68-decibel sound measurement at 70 mph is the same as the Turbo model's, and it puts the CX-30 in the company of the Mercedes GLA250. "Too bad its driving range is short. I averaged right around 300 miles per tank, which required extra stops on my long trip." 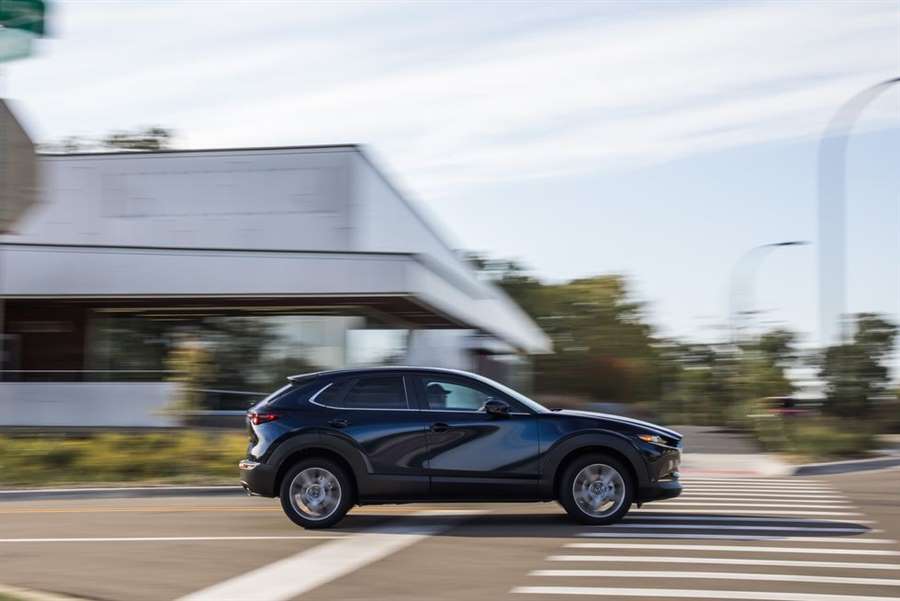 A few other criticisms have creeped into the logbook. The sometimes wonky activation of the car's automatic high beams can make for a challenging drive on foggy nights. The CX-30's adaptive cruise control sometimes will brake harder and more suddenly than we expect when approaching slower vehicles. "You should never design a heated seat control near a cupholder," noted creative director Darin Johnson. He didn't elaborate, but we assume he cleaned up whatever he spilled reaching for the seat heaters.

But our first 10,000 miles have largely been spent pondering how the CX-30 fits in Mazda's lineup, as well as how it stacks up with competitors such as Kia's Soul and Seltos and Hyundai's Kona and Venue. "I don't see why some people are confused about the CX-30's mission," buyer's guide deputy editor Rich Ceppos wrote. "It's the right-sized subcompact SUV that the CX-3 should have been in the first place—the cargo-friendly analog to the Mazda 3 sedan." 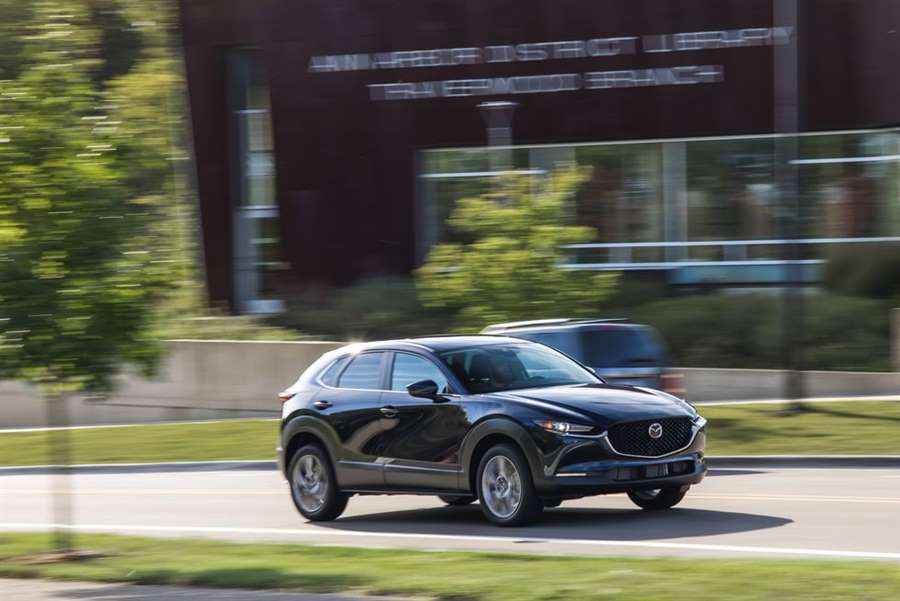 As for that bucket, it was blue, plastic, and it appeared out of nowhere on our local stretch of M-14. Ceppos, stuck in the center lane, didn't have any choice but to hit it. The result was a baseball-sized hole in the plastic panel under the CX-30's nose. We had the dealer inspect the damage when we dropped the vehicle off for its scheduled 10,000-mile service, which included an oil and filter change and a tire rotation at a cost of $107. Replacing the panel relieved us of another $93 and entailed an overnight stay while the replacement part was ordered.

Aside from that mishap, it's been a solid start to the CX-30's 40,000-mile test. "Sweet steering, sharp throttle response, fun handling—yep, this is a Mazda alright," Ceppos wrote. His only suggestion? It could benefit from the turbocharged engine. 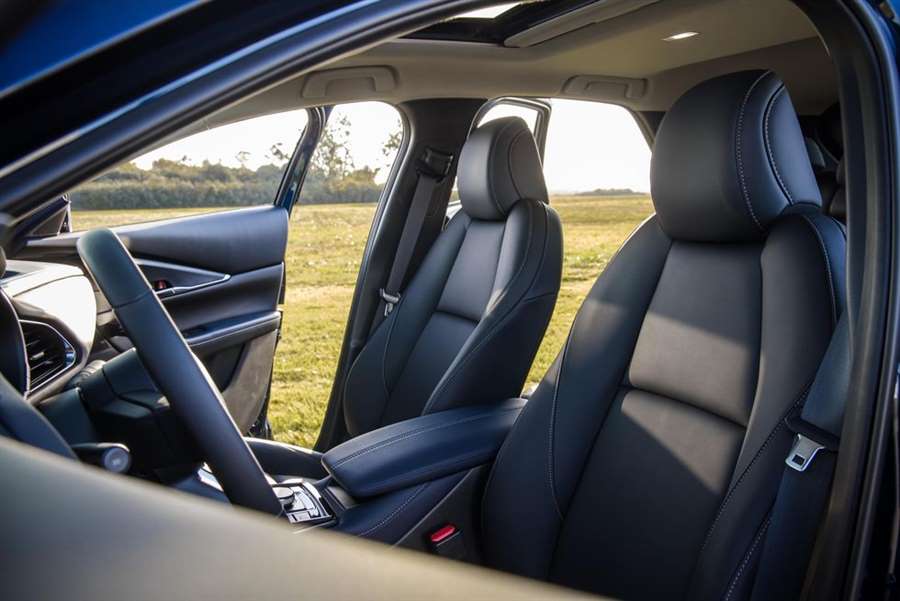 In 2019, when we took the keys to a CX-5 for a 40,000-mile long-term test, we wrote that "Mazda has few obvious problems." The CX-5 supported that conclusion, proving "easy to love," earning 10Best honors in 2020 and 2021, and exhibiting uncommon excellence despite belonging to a segment we generally greet with a resigned sigh.

We tolerate compact SUVs because they're popular, but we celebrate Mazdas because they're good. The tension between those ideas, plus the rising popularity of small SUVs, makes for interesting work. The CX-5 won us over. So, let's up the degree of difficulty. 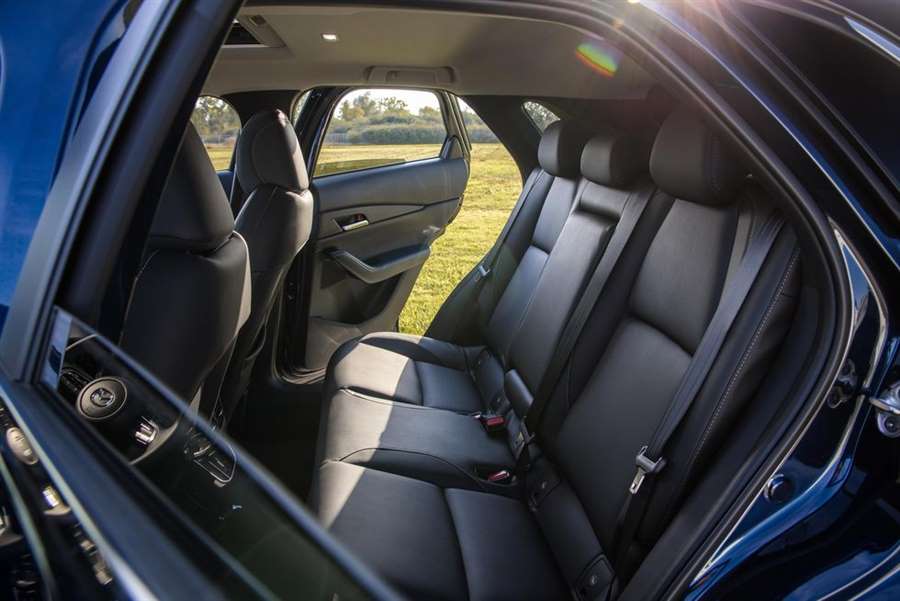 The CX-30 is a subcompact SUV, a segment that typically prompts a single frustrated question: Why aren't you a car? Recall, if you will, our review of the 2020 CX-30, which began, "Have you considered the Mazda 3?"

The 3 is roughly the same size as the CX-30, give or take a tuck or tweak here and there, and it's available as a hatchback. We like the 3 a lot. Despite already building the 3 and a similarly sized crossover, the CX-3, Mazda introduced the CX-30 for 2020. Why? Because people like to sit a little higher these days, and higher sells.

Any other reasons? We're about to find out over 40,000 miles with a 2021 CX-30. Now in its second production year, Mazda didn't change much from the CX-30's debut run except to add an optional turbocharged 2.5-liter engine that's good for 250 horsepower. 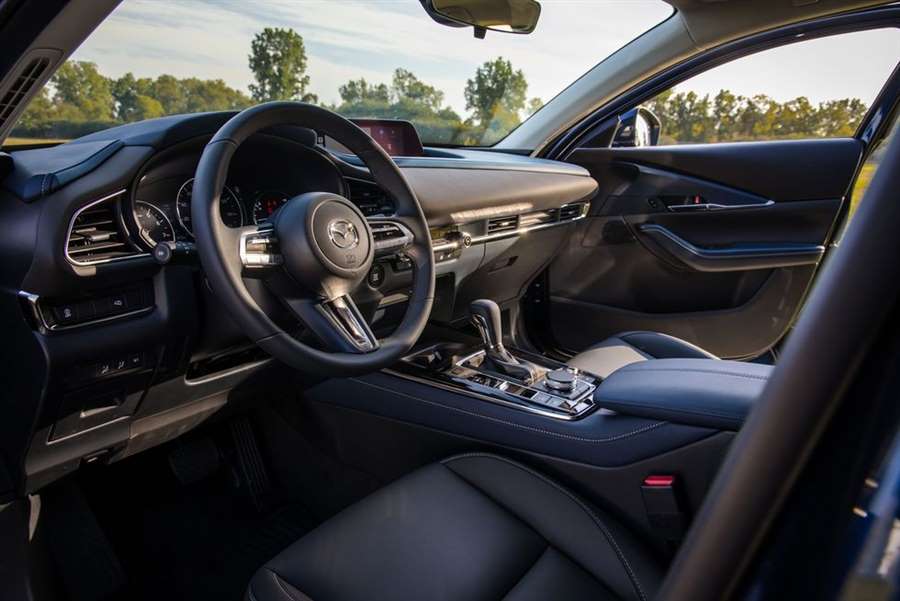 "I heard we got the non-turbo," staff editor Austin Irwin messaged shortly after the CX-30 arrived. To ensure his feelings were clear, he punctuated the sentence with a sad-face emoji.

We did not get the turbo. Sad-face emoji.

Our all-wheel-drive CX-30 came with the standard 2.5-liter inline-four and six-speed automatic transmission. It makes 186 horsepower and ran to 60 mph in 7.6 seconds in our initial testing. It hit the quarter mile in 15.9 seconds at 89 mph and pulled 0.85 g on the skidpad. Those are decent numbers. The Mazda 3 2.5 Turbo we recently tested did zero to 60 mph in 5.6 seconds. Just pointing that out.

We got the Preferred Package, which includes a power driver's seat, memory positioning for the exterior mirrors, heated front seats, a power sliding-glass moonroof, and driver's seat memory. But we stayed light on options for this one. We picked up all-weather floor mats ($150) and a rear bumper guard ($125). That's it. The as-tested price totaled $29,075. We took delivery and promptly set about running SUV-like errands in our SUV-like car (or our carlike SUV). 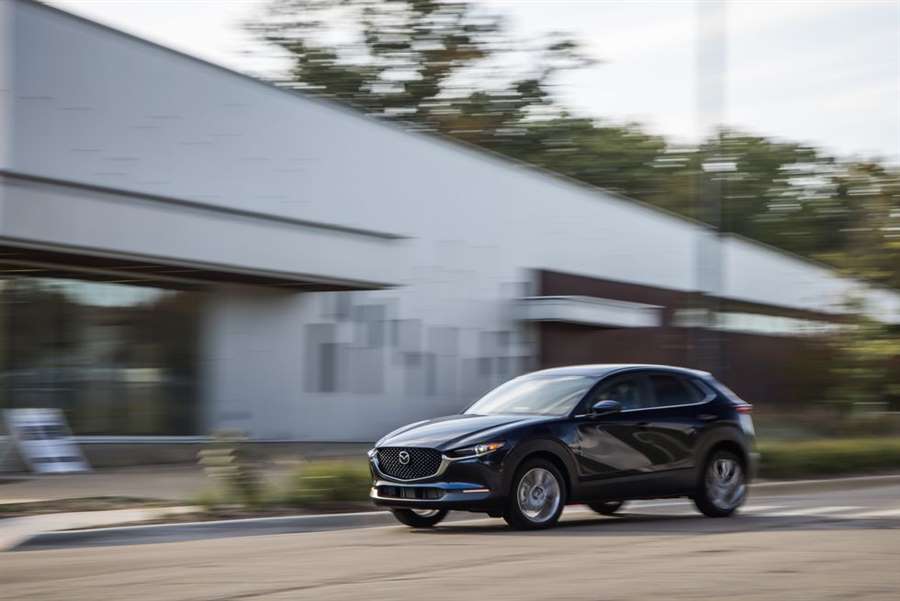 The first coffee spill came on a run to City Hall to drop off a ballot. The first grownup shunted to the back seat (kids are quick to grab the heated front passenger seat) surveyed her surroundings and said, "They make the most of the space they've got back here." A quick run to the driving range revealed that golf clubs fit in the aft cargo area without folding the rear seats. Barely.

Since we're still working from home, we ran some simulated commutes through town, out on country roads and on the highway. We recommend the country drive, especially in autumn. It's lovely, and there are just enough twists and turns to prove the CX-30 moves like a Mazda. It's playful enough to be fun.

The black on navy interior with leatherette seats and a leather-wrapped steering wheel makes for high-quality company. The 8.8-inch infotainment screen is fine, and Android Auto and Apple CarPlay come standard at the Select Package level. (That's one down from our Preferred.) The Deep Crystal Blue Mica paint job has already earned compliments. If there are quirks to be found, our planned lap and a half or so around the Earth should shake them out.

"Such a comfortable little medium SUV" begins the first entry in the logbook, which brings us back to our 40,000-mile challenge: What exactly is the CX-30, and why does it exist?

We had a different CX-30 at this year's 10Best testing and comments ranged from "true to the Mazda ethos" and "much more in the realm of Audi and BMW than Chevy and Toyota" to "just get the Mazda 3."

Have you considered one of those?

Of course, you have. Through October, Mazda sold nearly 28,000 3s in North America in 2020, but that's down almost 37 percent from the same point a year ago. The CX-3's sales numbers this year are also down, by 27.5 percent (7485 sold). The upshot for Mazda is that those declines could be ascribed to the appeal of the CX-30, which moved 31,007 units through October. In the Thunderdome of Mazda dealerships, the CX-30 is thriving, and Mazda buyers appear to (narrowly) prefer it to the 3. We'll let you know if there needs to be a recount.