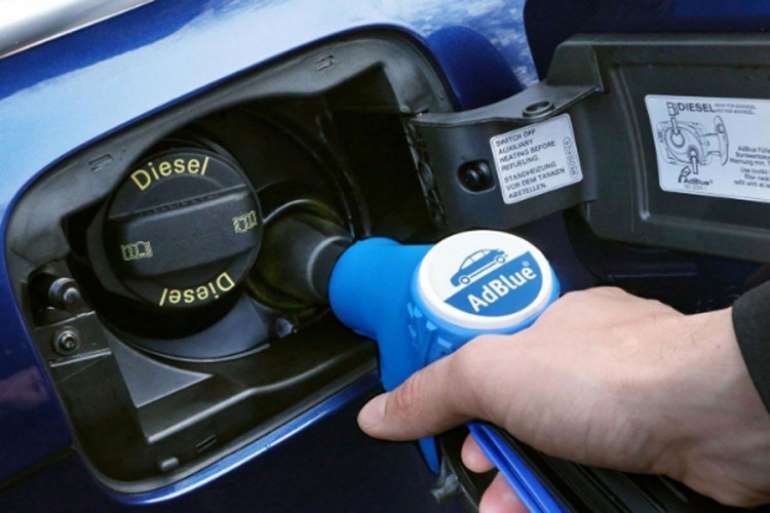 AdBlue is a 32.5 percent aqueous solution of urea that is neither toxic nor flammable, but is highly corrosive.

This product is also known as AUS 32, which is an abbreviation of the English name for aqueous urea solution. It was developed especially for diesel engines, whose exhaust systems are equipped with selective catalytic reduction (SCR system).

AdBlue is injected into the exhaust gases in the catalytic converter of the diesel engine to reduce harmful emissions of nitrogen oxides (NOx). In this way, the emission standards for Euro 4, Euro 5 and Euro 6 can be met. By injecting the AdBlue solution into the exhaust gases, the urea contained in the ammonia (NH3) and carbon dioxide (CO2) solution is obtained.

The whole process takes place at high temperatures, at which ammonia reacts with nitrogen oxides, which are formed during the combustion of diesel. The product of this reaction is harmless nitrogen (N2) and water vapor (H2O), which come out of the exhaust. This process is called selective catalytic reduction (SCR). AdBlue is liquid up to a temperature of -11.5 degrees and can be reused without restriction if it is dissolved continuously. It is very corrosive, and must not come into contact with non-ferrous metals, various types of plastic and similar materials.

The dosing of AdBlue additive, which is stored in a separate tank, is done completely automatically in the vehicle, in accordance with the control unit. In the case of Euro 4, the amount of added AdBlue additive corresponds to about 3-4 percent of the amount of fuel consumed, while in Euro 5 it is between 5 and 7 percent.

In certain cases, AdBlue can reduce diesel consumption by up to 7 percent, which partially justifies the initial costs of mounting on a vehicle in accordance with the Euro 4 and Euro 5 norm. By comparison, about 35 new vehicles with AdBlue emit the same amount of particles as a ten-year-old vehicle without a SCR system.

Many modern diesels use AdBlue solution, which is poured into a special tank and must not be mixed with fuel. When it is used up, a new amount should be added. Although it will work without AdBlue, the engine will emit larger amounts of harmful gases, and the built-in diagnostic system (OBD)

Tagged under
More in this category: « Manhart BMW X5 M with 823HP The hatch and convertible Mini have been restyled again »