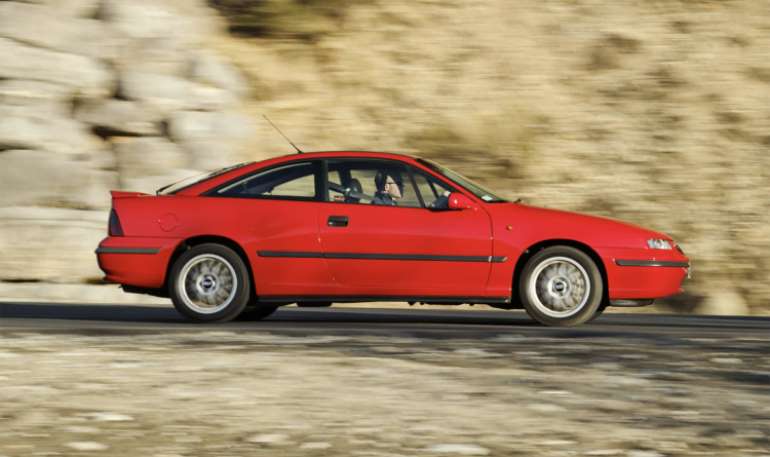 There is a reason why a 1993 Opel Calibra cost 300,000 German marks. It is a special specimen that came out of the workshop of the famous Günter Artz, a German car dealer, also known for, to put it mildly, the extravagant projects he made.

The Opel Calibra was produced from 1989 to 1997, and was an example of a car that, combining aerodynamics with a striking design (it had a record drag coefficient and then an outstanding appearance), gained a reputation as a cult coupe among enthusiasts.

But one of them, very special, under the sheet metal was actually the famous Opel Lotus Omega, which we recently wrote about.

The unique car was created by Günter Artz, a German car dealer who initially used Volkswagen models as a basis, after which he started using Opel. The goal, Artz says, was to pack performance and speed against all rules and amplify the impression of surprise.

Probably Artz's most famous car is the Golf 928. On the chassis of the damaged Porsche 928, he built a huge 240 hp Golf, which was 21 centimeters wider and 30 centimeters longer than VW's standard model.

However, enthusiasts believe that Artz's "Magnum Opus" was a yellow Lotus Calibra. With an output of 377 hp and a top speed of over 280 km / h, it was a perfect "camouflage", writes Auto Klub.

In addition to under the hood, Lotus' "ingredients" were also used inside the cab. The dashboard, steering wheel and leather seats come from Omega A, and the Lotus signature adorned the dials.

At the time Lotus was part of General Motors, powerful engines such as the 3.6-liter twin-turbo six-cylinder in the Omega or the 5.7-liter V8 in the Corvette C4 ZR-1 were being developed.

Artz initially focused on increasing performance. For the project, he assembled a Lotec version of the six-cylinder with 470 hp, but after bad experiences, a standard engine of 377 hp was installed.

The project was finally named Lotus Calibra - weighing 1.7 tons, shockingly powerful and surprisingly comfortable. Like the Golf 928, the Lotus Calibra was larger than the production version - about 16 centimeters longer and even 12 centimeters wider. In addition, larger alloy wheels wrapped in wider tires were used.

Production cost a real small fortune. The standard Opel Calibra was worth 45,000 marks at the time, and the windows alone, specially made in Italy, cost 13,000, and 17,000 marks had to be paid to Kamei for custom-made bumpers.

The final price of the Lotus Caliber was 300,000 marks, and only a few copies were produced.

The car was approved for use on a public road only in 1993, and the project fell silent after Opel terminated the dealership agreement, so it was shut down in 1995. A year later, Artz gave up the car business.

Tagged under
More in this category: « The unique Tesla Model S station wagon is still looking for its customer The first BMW hydrogen models will arrive next year »