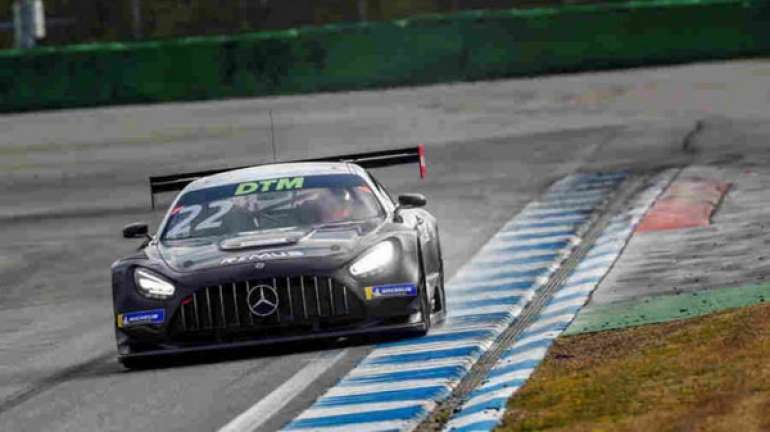 According to Serbiaring, Auer started the race from the first starting position in the "Mercedes AMG", ahead of Whitman and the two Ferraris, Liam Lawson and Alex Albon. Audi runner Kelvin van der Linde entered the race from fifth place. The visiting driver, Italian Mirko Bortoloti, was the best placed Lamborghini driver at the start, in sixth place.

Auer held the lead, ahead of Whitman, while Albon overtook his teammate for third place. Kelvin van der Linde dropped eighth place after being overtaken by Bortoloti and two "Mercedes" by Maximilian Goetz and Daniel Huncadella during the first lap.

Due to a flat tire, Ezme Hoki gave up in the first lap, because parts of the tire damaged his "Lamborghini". Auer, Lawson and Goetz did their tire change at the end of the fifth lap. Whitman and Albon did the same lap later, but Lawson managed to overtake Whitman immediately due to better heated tires, while Albon remained stuck behind the BMW. After his stop, Hunkadelja returned to the track in the fight between BMW and Ferrari, where he found himself in front of Whitman.

Albon put pressure on Whitman during almost the entire race, and in the 19th lap, Getz and Bortoloti approached them, which turned two duels into a four-pointer. Lower in the standings, Esteban Mut, behind the wheel of the "Lamborghini" T3 motorsport, reached 15th place, overtaking Christian Klin. Kelvin van der Linde completed his stand at the end of the 20th lap, and managed to get back on the track between Whitman and Albon, which helped the two-time DTM champion separate himself from the competition behind him. The Mercedes driver, Philip Ellis, performed a pirouette on the track and lost four positions.

Van der Linde began to put serious pressure on Whitman, with one slight contact in an attempt to attack. After that, Whitman separated from "Audi" again. In the 29th round, the current runner-up Nico Miller reached the 10th place, overtaking Vincent Abril. In the same round, Sheldon van der Linde's "BMW" withdraws from the race. In an attempt to overtake Kelvin van der Linde at the beginning of the 31st lap, Albon hit the back end of the "Audi R8 LMS". Both drivers continued the race unhindered, but their incident was under investigation. Mike Rockenfeller was the last to change the tires, in the 33rd lap, and the technical problem left Hunkadelin's "Mercedes AMG" by the track.

Lucas Auer was the first to cross the finish line, ahead of Lawson and Whitman. The fourth to see the checkered flag was Kelvin van der Linde, who finished the race ahead of Albon, Goetz and Bortoloti. Nico Miller, Vincent Abril and Esteban Mut completed the top ten.

In the general classification, Lawson leads with 175 points, ahead of Whitman who has collected 165 so far, and Kelvin van der Linde has 160 points. Goetz is fourth with 155 points.

The DTM season continues on October 2 and 3, when the program will feature two races at the Hockenheimring, before the season finale, which takes place a week later at the Norrisring.

Tagged under
More in this category: « Ford Bronco may even arrive in Europe! Lotus Emira V6 First Edition »