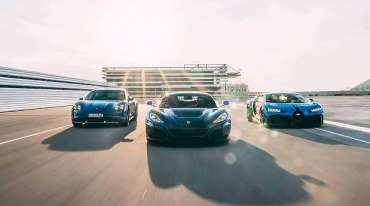 After numerous announcements and speculations, it was officially announced today that the company Rimac Automobili becomes the majority owner of the Bugatti brand, while the company itself becomes the Rimac Group divided into two companies - Bugatti Rimac and Rimac Technology.

This afternoon, this was confirmed by the company Rimac Automobili, which confirmed the speculations that Rimac will take over Bugatti, a famous company known for hypersport cars.

Rimac, backed by Porsche and Hyundai, will own 55 percent of the new company, while the rest will be owned by VW’s Porsche brand.

This means that Porsche will control 58.2 percent of the new company through its existing stakes in Rimac Automobiles, although the companies have said that Porsche will not have the right to vote on how this group is managed. "No amount of money has changed hands," said Porsche boss Oliver Blume.

This, too, brings Rimca further under the auspices of VW, as the German company embarked on an electric offensive in the amount of 35 billion euros. Both Bugatti and Rimac will continue to develop their brands, and while Bugatti's production will remain in France, all his research will move to Rimac's new headquarters in Croatia.

UPDATED: Rimac became the majority owner of the famous "Bugati"

The company "Rimac automobili" of the Croatian entrepreneur and innovator Mate Rimac, has become the majority owner of "Bugatija", a famous French manufacturer of luxury sports cars, the company announced. The new home of "Bugatija" will be the Rimac campus in Croatia, RTS writes.

In just 12 years of existence, the company "Rimac automobili" of the Croatian innovator and entrepreneur Mate Rimac has gone from a startup company with one man in a garage to majority ownership over the famous "Bugati". Mate Rimac says that this is an exciting moment in the short but turbulent history of "Rimac cars", Index.hr reports.

"Rimac and Bugatti complement each other perfectly. As a young, agile and fast automotive and technology company, we have won the trust of our partners and a strong position in the high-performance electrical technology industry," Rimac points out.

The company "Rimac Automobiles" will be reorganized into the "Rimac Group", divided into two companies - "Bugati Rimac" and "Rimac Technology".

"Bugati" and "Rimac automobili" continue as separate brands, retaining the existing production facilities and distribution channels, while the headquarters and all development for both brands will be in Croatia. Both brands will continue to develop their car models. "Rimac Group" will continue to innovate, create its own supercars and develop innovative technologies for many world car manufacturers. Now, such technology, developed in Croatia, will be able to be applied in future "Bugati" models.

Global headquarters on the Rimac campus

In the future, the global headquarters of the company "Bugati Rimac" will be located in the new Rimac campus, which will also be the headquarters of the company "Rimac Technology". Components for models of both brands will be produced there, but "Bugati's" cars will still be assembled in the famous factory in Molheim, France - an Istrian place that is inseparable from the "Bugati" brand.

"Bugati" operated within the "Volkswagen Group", which sells cars around the world under the brands "Bentley", "Lamborghini", "Audi", "Porsche", "Seat", "Skoda" and "Volkswagen".

From one man in the garage to a supercar and "Bugatija"

Mate Rimac started his path to success as a hobby, when at the age of 20 he converted his "be-em-ve" produced in 1984 in a garage into a battery drive. He founded the company "Rimac automobili" in 2009, and only 11 years later, the company celebrated the employment of its 1,000. workers. The company's headquarters are in the town of Sveta Nedelja in Zagreb County.

Today, the company is developing high-performance electric powertrains and batteries for some of the world's largest car manufacturers.

Rimac also launched two generations of its supercars. This year, the latest "rimac nevera" was presented - an electric supercar that accelerates to 100 kilometers per hour in less than two seconds. A total of 150 copies will be produced in Croatia. "Nevera" is a production variant of the concept car, first shown at the International Motor Show in Geneva in 2018. 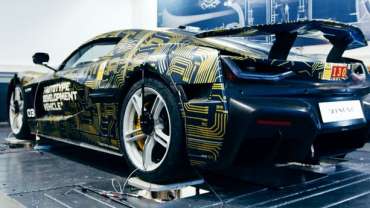 The new Rimac C_Two, which is getting closer to series production, proves that a top sports car does not have to be reserved only for the tracks. Proof of this is the final fine-tuning of the suspension, which must behave equally well on the road and on the race track.

According to Vidiauto.com, in cooperation with KW Suspension, the dynamic behavior of the C_Two model is calibrated countless times. It must satisfy many types of surfaces - a perfect race track, open road and highway, and all use special equipment to develop support. This equipment enables computer preparation of virtual surfaces on which the car is driven. Entire paths or certain sections of roads with all the unevenness and other imperfections of the road can be created. Thanks to this KW device and polished by Rimac, the new C_Two is equipped with electronically adjustable shock absorbers and the ability to actively adjust the height of the vehicle, all so that drivers can get the best performance from their future car.

After completing the computer testing and tuning, the C_Two model embarks on a new round of track testing, all to check if the tuning was good enough or not. It will also be the final testing, as the serial version of the C_Two will be introduced in a few months. And Rimac allowed everyone to see how it is done, and you can see the details in the attached video:

Published in Blog/News
Tagged under