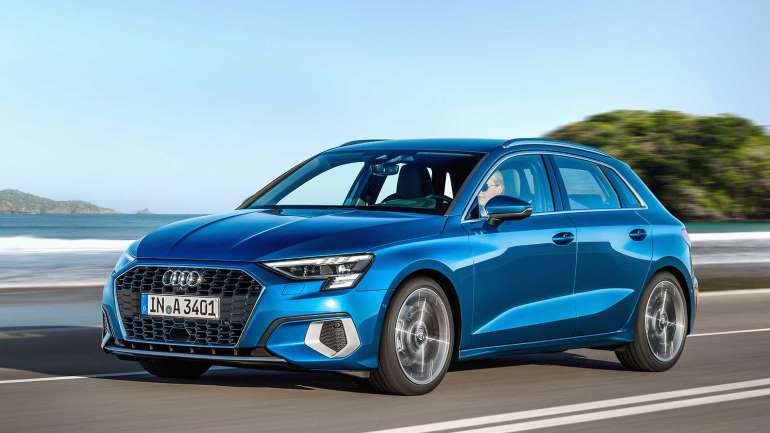 The Audi A3 has been a desirable premium hatchback from the moment it was launched back in 1996. It stole a march on posh German rivals BMW and Mercedes-Benz in being a sensible, conventional but oh-so-upmarket hatchback that Ford Focus and Volkswagen Golf owners could see themselves trading up to. Sales were strong from the off and haven’t looked back.

There have been several versions over the years, and we’re looking at the 2012-2020 third-generation car here. Boasting plentiful Audi sophistication in appearance and interior, it was offered in both three-door and Sportback five-door guise, with a range of diesel and petrol engines, plus S3 and RS3 high-performance range-toppers. Audi also sold it as a saloon and cabriolet, although the core hatchbacks sold best. These are the cars that you’ll find in the greatest numbers on the used car market.

This generation of A3 was facelifted in 2016, gaining new headlights and tail lamps, smoother bumpers and, most significantly of all, a revised and enlarged Audi singleframe grille. There were tech boosts inside, too, plus new engine choices. With prices for this generation of A3 now temptingly starting from under £6,000, if you’re interested in buying one, here are 10 tips to help you get a good one.

Leaking water pumps are a surprisingly common occurrence on Mk3 Audi A3. There are two giveaways: one, pools of water under the engine bay when the car’s been left for a while, and two, a ‘check coolant level’ warning in the instrument display. The issue surrounds the water pump and thermostat being mounted in a large plastic housing – the material can crack over time, leading to leaks. If left unattended, the water pump itself can fail, meaning you’ll have to buy a new water pump as well as a thermostat and housing: check carefully.

This generation of Audi A3 was fitted with a diesel particulate filter (DPF) to help the car pass ever-stricter emissions regulations. They can be problematic if a diesel has regularly been driven for short-hop trips: it doesn’t give the filter a chance to ‘regenerate’ and clean itself, so it can become blocked – which a yellow warning light on the dashboard will signify. A long motorway blast can clean a blocked DPF, while specialists can use special procedures to clean it out. If it’s too far gone though, you’ll have to buy a new DPF – the car won’t pass its MOT otherwise.

The A3 boasts electronically-controlled variable servicing. The intervals are two years or up to 19,000 miles – cars that are used more intensively will flash up the need for servicing sooner than models that have a gentle life gliding along the UK’s motorways. Because of this, it’s worth scouring the service history to make sure all the dealer or specialist stamps add up, and there hasn’t been an over-extended period between services.

Alongside the standard manual, Audi offered the DSG dual-clutch automatic gearbox to A3 buyers. It was a popular choice, as gearshifts were smoother and snappier than ever, with an almost other-worldly ability to be in the right gear at the right time. DSG gearboxes helped save fuel, too. They do require maintenance though: they have their own fluid and filter change requirements every 40,000 miles. Premature wear may result if this hasn’t been carried out – feel for jerky, hesitant gearchanges and a reluctance to pull away smoothly.

A premium appeal of the Audi A3 is the opportunity to buy quattro four-wheel drive models. They have great all-weather grip so wintery conditions will hold no fear, while acceleration away from the line is more efficient, which is great fun in high-power models. There are a few things to note, though: the quattro system does need servicing, which can be overlooked by those maintaining their A3 on a budget. And quattro models have smaller boots than regular A3, due to the extra space taken up by the rear-wheel drive system.

The A3 has a very high-quality interior with a premium finish. This is the reason many people are drawn to the Audi over mainstream alternatives. But it’s not immune from faults – early cars can suffer from a few trim rattles, while the mechanism for the clever pop-up infotainment screen can get gritty with age; make sure it works smoothly. Make sure all the interior electronics work as they should, and also check the functionality of the electronic parking brake.

Diesel-engined Audi A3s, and the high-performance S3, require timing belt changes every five years or 75,000 miles. Flick through the service history to make sure this has been done – or budget for it if it’s due, because replacing an engine is much more expensive than replacing the timing belt. Audi advises the water pump is changed at the same time.

Audi was early to follow the plug-in hybrid trend with the launch of the A3 Sportback e-tron in 2014. It combined a 1.4-litre TFSI petrol engine with an electric motor, delivering a sprightly 0-62mph in 7.9 seconds. So long as the battery has enough charge, it is able to drive in pure electric mode: Audi claims a total range of 31 miles.

A 113bhp 1.0-litre three-cylinder arrived when the A3 was facelifted, replacing the 1.2-litre, while the 1.4-litre CoD grew to 1.5 litres. Higher-powered engines are available with quattro four-wheel drive; there’s a fuel economy penalty of a few mpg.

Core model grades comprise SE, Sport and S line. For many, S line is the most desirable: it has the largest wheels, the lowest suspension, the beefed up bodykit and the most hip-hugging S line-branded seats inside. Take note though: the stiffer suspension gives a firmer ride, which can be too firm for some. Audi did allow new car buyers to choose a ‘comfort’ suspension for S line models though, which is a bit more compliant. It’s worth looking out for this on the spec sheet – and taking a test drive if ride quality is important to you.

So… Should you buy one?

The Mk3 Audi A3 is a very appealing car. Its sophisticated interior, complete with that snazzy pop-up infotainment screen, still looks good even today – particularly on 2016-2020 facelift cars fitted with the Virtual Cockpit digital instrument display. Equipment levels are decent, with even entry-grade SE featuring xenon headlights and 16-inch alloys, while Sport has larger alloys and dual-zone climate control, while S line features everything you could wish for. Choose one of the more fuel-efficient engines and the A3 will prove surprisingly easy on fuel, too.

Typically Audi build quality means even a 2012 car should still look fresh, with deep paint, precise-fit panelwork and a robust feel to the quality interior. Of course, if it doesn’t, that’s a sure-fire sign something’s not quite right, so best steer clear.

The A3 is not without its problems, but specialists are now well versed in fixing them on a budget. If you know the right things to check and watch out for, the A3 should prove to be a very dependable, reliable machine – and as it’s one that will always remain in demand, you’ll always be able to sell it on for a good price. It’s easy to see why the Audi A3 remains so popular.

Audi has kept the A3 virtually identical to the previous generation in terms of length but it has a longer wheelbase (increase of 23mm) giving passengers more legroom in the rear of the car.

There are plenty of cubbies to hide loose change from view while the door pockets are of a good size as is the glove box. All-round visibility is good but it may be an idea to opt for parking sensors for added peace of mind when reversing. The handbrake has been replaced by a parking brake freeing up space in the central console.

Will my luggage fit?

Boot space has increased by 15 litres over the previous generation to 365 litres when you have the seats in place. Fold the split-folding rear seats flat and the load space increases to 1,100 litres which is 5 litres more than its main rival, the BMW 1 Series. The BMW’s loadspace is 100 litres larger when the rear seats are folded down, however.

Expect the Audi A3 to receive five stars when tested by Euro NCAP even though the previous generation only received four stars. Standard Audi A3 safety kit on the Audi A3 includes front seatbelt pretensioners, as well as driver, passenger, side body, head and knee airbags while all models also have an alarm/immobiliser and remote central locking with deadlocks.