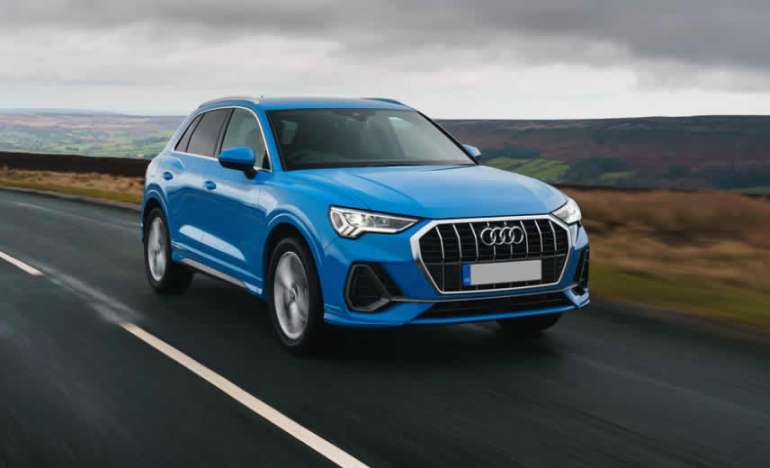 The Audi Q3 is an upmarket compact SUV that delivers owners loads of high-tech features and lots of cabin space. It’s not that enjoyable to drive, however

The Audi Q3 is a spacious and stylish family SUV with a great interior and lots of hi-tech features. It’s an alternative to the BMW X1 and Volvo XC40 and sits between the Q2 and Q5 in the enormous range of SUVs available in Audi’s line-up. 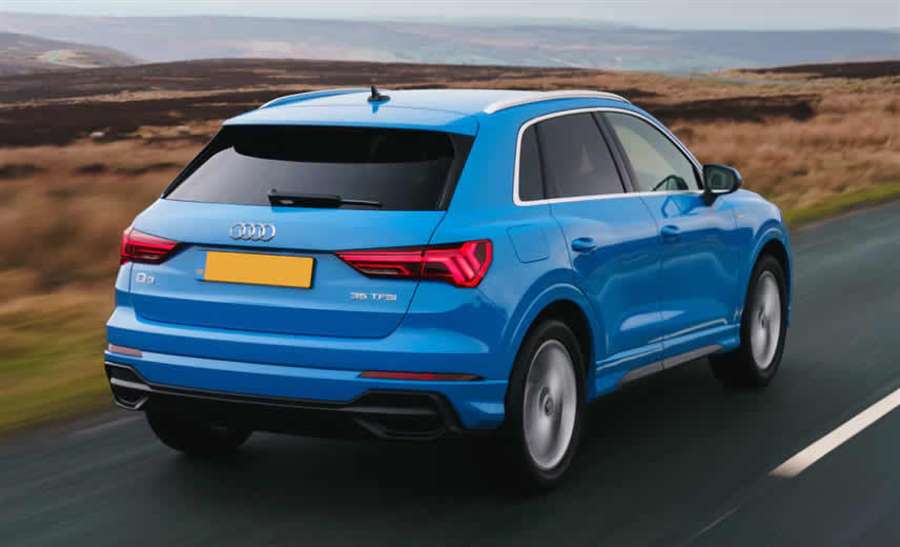 That line-up can be a bit like watching Eastenders and trying to decide which Mitchell brother is on the screen – they do look very similar. That’s good in some cases and bad in others, depending on the price they’re charging. The Q3 is, thankfully, in the sweet spot.

The Audi Q3’s grille looks like a smaller version of the Q8’s, for example, while the exterior design is similar to the Q5’s, but smaller. This kind of Russian-doll styling is common in a lot of car manufacturers, so we can’t hold too much of a grudge.

All Audi Q3s get a set of digital dials with sat-nav functionality and more, which is great to see – and the standard infotainment screen is sharp and easy to use. The Q3 scores highly for tech, as it feels like a more expensive model in that regard.

It’s a similar story when it comes to upholstery and interior materials, as the Q3 is well-built, looks smart and has some customisation options including an Alcantara trim that looks and feels great.

It has a typically high-up SUV driving position with plenty of adjustment, which means you can get comfortable quite easily. Plus there’s lots of room in the front seats and no headroom issues at all.

There’s no doubt the Audi Q3 has been inspired by the vast Q8 SUV – that giant grille, for example, makes it look just like a toddler that’s trying on its Grandparent’s dentures
Mat Watson, carwow expert

Plus, in the rear seats the Q3 has more room than you’ll find in many other cars of this size, and you can slide the rear seats forwards and backwards to prioritise either passenger legroom or boot space. 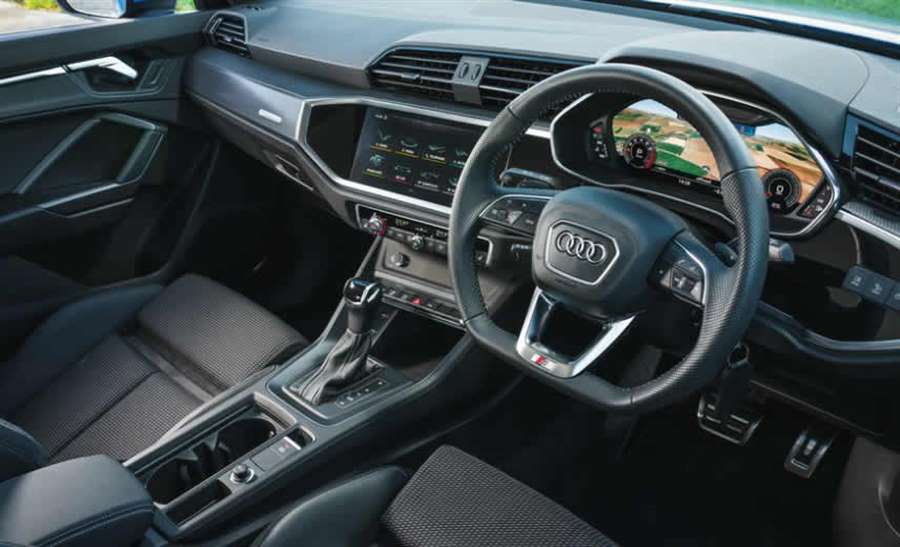 Impressively, even with the back seats in their most rearward position, there’s more space in the boot than you get in a BMW X1. With them set forward, the boot is really big and practical. Fold the back seats down and there’s easily enough room to carry a bicycle.

There are a few engines to choose from, starting with a 150hp petrol engine in the 35 TFSI model going right up to a 233hp petrol in the 45 TFSI, with 150hp and 190hp diesels in the mix as well. The entry point makes the most sense for most people as it’s better value for money.

A seven-speed automatic is available, but as it’s a bit slow to respond when you put your foot down, the manual model is absolutely fine. Some models have four-wheel drive (Audi calls it quattro) for extra grip, but it’s not necessary and adds to the cost.

Though the Audi Q3 is comfortable and composed, it’s more suited to motorways than country roads. It has a slightly stiff edge to the ride in versions with larger wheels and stiffer sports suspension, but at higher speeds, it’s smooth enough.

Light steering means it’s easy to drive, but it’s not particularly fun – a BMW X1 or Mini Countryman is a better choice for those who love driving. You get plenty of active safety kit as standard, but you’ll have to pay extra for adaptive cruise control.

The Audi Q3 is a great all-around family SUV, with strengths in the key areas buyers of these cars want. It’s spacious and has a great interior with loads of tech included, even if it’s on the expensive side. Still, you should be able to find a good deal by heading over to our deals page. 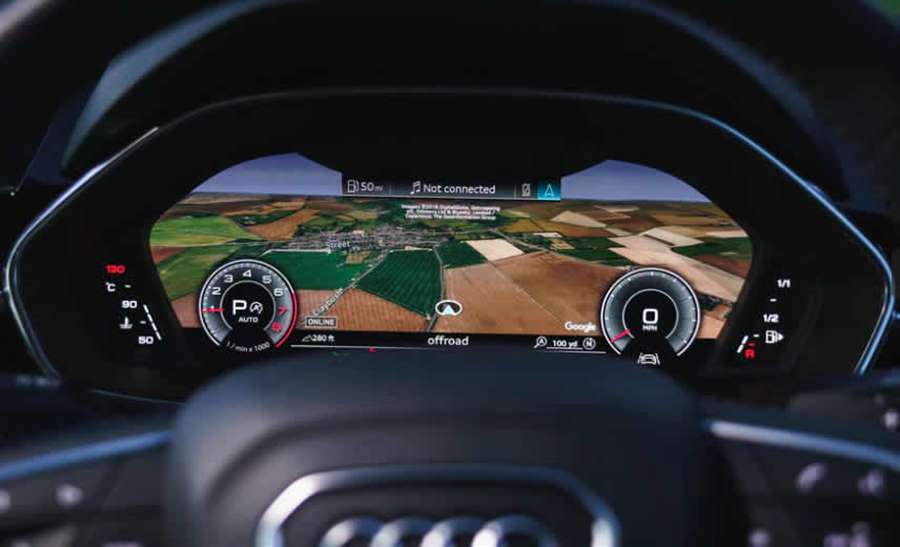 How practical is it?
The Audi Q3 might be a fairly compact SUV, but there’s loads of space inside for tall adults – the only real criticism is that there’s a large lump in the floor that cuts into a middle passenger’s foot space.

The Audi Q3’s interior looks far more futuristic than in most small SUVs. It gets lots of kit as standard, too, but the most eye-catching trims and colours are reserved for top-spec cars.

The Audi Q3’s interior looks very similar to what you find in the range-topping Q8 SUV. There’s a large ring of metal-effect plastic on the dashboard that’s supposed to mimic the shape of the Audi Q3’s grille and a vast slab of glossy black plastic that sits flush with the central touchscreen.

You also get a second digital display in front the steering in place of conventional dials but, unlike in the Q8, the Q3 comes with intuitive physical knobs and dials for the climate control instead of a third (and rather fiddly) touchscreen.

As standard, the Audi Q3 comes with a fairly staid selection of black, grey and silver interior trims – all of which feel suitably soft and sturdy. Under the cool hook-shaped door handles you’ll find a few hard brittle surfaces, but these are tucked down far enough that you won’t notice unless you reach down to adjust your seat. On the subject of seats, pick a sporty S-Line model and you get upgraded front seats with more supportive padding and electric adjustment.

You can spruce up the Audi Q3’s interior with 30-colour mood lighting or upgrade the dashboard trims with some embossed aluminium or unvarnished wood. Go for a top-spec Edition One model and you can also get the dashboard, doors and seat edges trimmed in suede-like Alcantara in a range of colours.

Infotainment
Every Audi Q3 comes with a dual-screen infotainment system consisting of a 10.1-inch central touchscreen and a second 10.25-inch Virtual Cockpit digital instrument display as standard. Through these, you’ll access all of the Audi Q3’s onboard features – besides the climate control which is operated using a simple row of buttons by the gear lever.

The central display – which fits almost seamlessly into the Q3’s glossy black dashboard trim – is bright and easy to read, even in direct sunlight. It responds quickly to your inputs and all the menus are simply and logically laid out. You don’t get a physical scroll wheel like in a BMW X1, however, so flicking through settings while you’re driving isn’t quite so easy.

That being said, you can access plenty of the system’s features through the digital driver’s display instead, using handy buttons on the steering wheel. These let you customise the dial graphics, change the radio station or view upcoming sat-nav directions.

It’s easy to input an address into the Audi Q3’s standard navigation system using the on-screen keyboard and it gives clear and concise directions. The 3D google maps feature is a nice touch, too – allowing you to see whether there’s a particularly nasty hill approaching over the horizon. But, it can be difficult to read place names on particularly dark sections of the map.

It’s even easier to follow directions if you upgrade the standard 10.25-inch digital driver’s display to a 12.3-inch Virtual Cockpit system. This allows you to minimise the digital dials in favour of a huge widescreen map instead.

Unlike in the BMW X1, Apple CarPlay and Android Auto come as standard so you can use your phone’s navigation apps through the Q3’s built-in screens if you aren’t a fan of Audi’s own system. These features also let you play music from your phone through the Audi Q3’s stereo without resorting to using a Bluetooth connection.

You’ll want to upgrade to the optional Bang & Olufsen stereo – even if you’re only a casual listener. This optional 15-speaker unit sounds absolutely fantastic and it’s easily loud enough to drown out any comments your passengers might have about your music tastes.