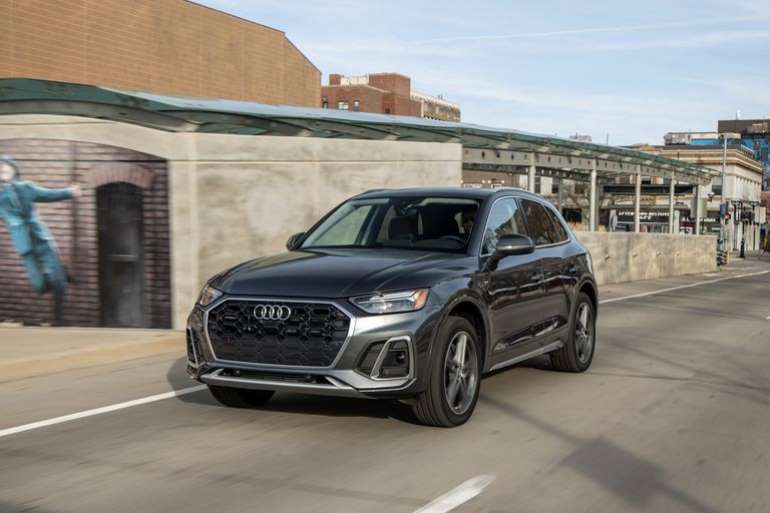 That many of today's plug-in hybrids (PHEVs) are both the most powerful and fuel-efficient examples within their respective model ranges says a lot about the progress of vehicle electrification. For example, Audi's updated 2021 Q5 SUV lineup, where the new PHEV variant, the Q5 55 TFSI e, packs the largest power figure, and its balance of performance, fuel efficiency, and luxury place it in a compelling spot in the lineup. Although the sportiest variant remains the SQ5—but only just. 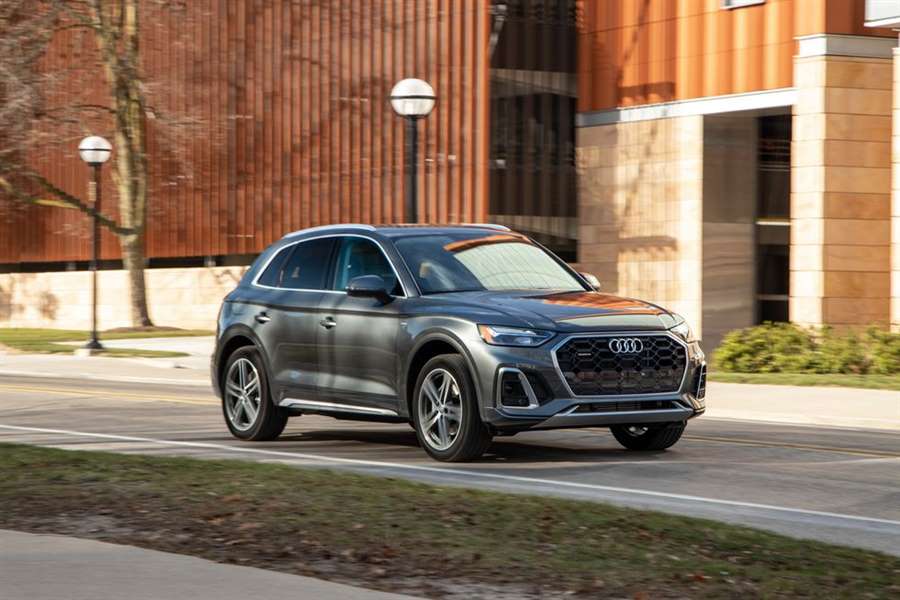 Starting at $52,995, the PHEV version of Audi's compact luxury crossover slots between the regular $44,395 Q5 45 TFSI and the performance-oriented $53,995 SQ5. Regardless of the powertrain, all 2021 Q5s receive more angular styling for their headlights and front and rear bumpers, as well as an updated grille that's more cohesive with the brand's newer models. The net effect ties the Q5's design elements together better than before, lending it a fresh but not overly aggressive aura when parked at the curb.

Audi introduced the plug-in Q5 last year, which combines a 248-hp turbocharged 2.0-liter inline-four with the hybrid's 141-hp electric motor for a peak output of 362 horses and 369 pound-feet of torque. With a standard seven-speed dual-clutch automatic transmission and Quattro all-wheel drive, Audi says the Q5 PHEV should reach 60 mph in a fleet 5.0 seconds—only 0.3 second slower than the SQ5 with its 349-hp turbo 3.0-liter V-6. 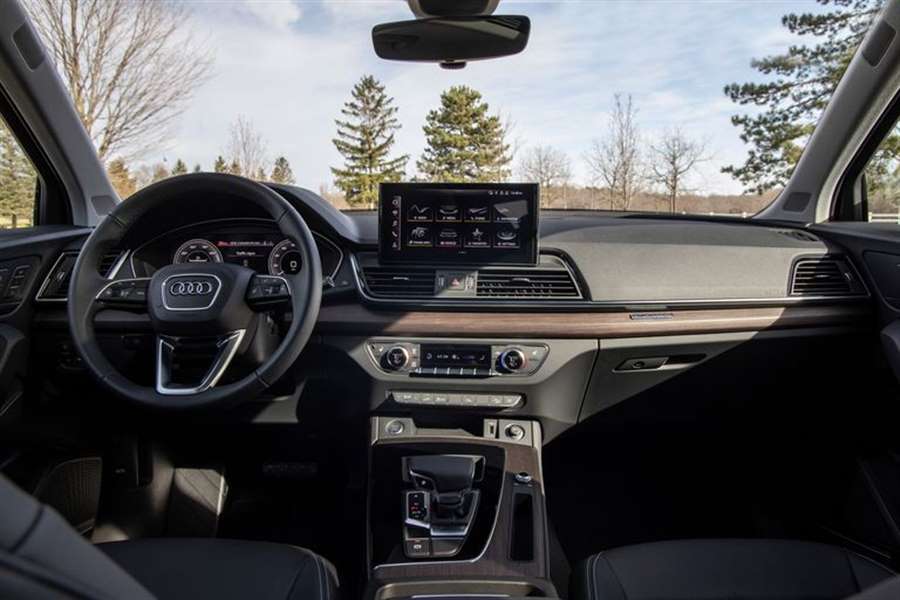 Even with the added 550 pounds of mass of the hybrid's battery and motor, the Q5 55 TFSI e is quick for its segment. It won't rearrange your internal organs when you stomp on the accelerator, but it will remind you that instant electric torque is a wonderful thing when used correctly. The Q5 PHEV feels just as at home on the open road as it does around town. Its ride is steady and polished even when the pavement is anything but, and it corners adroitly for its size. But as with most electrified vehicles, you'll notice its extra weight as the dynamic loads increase. 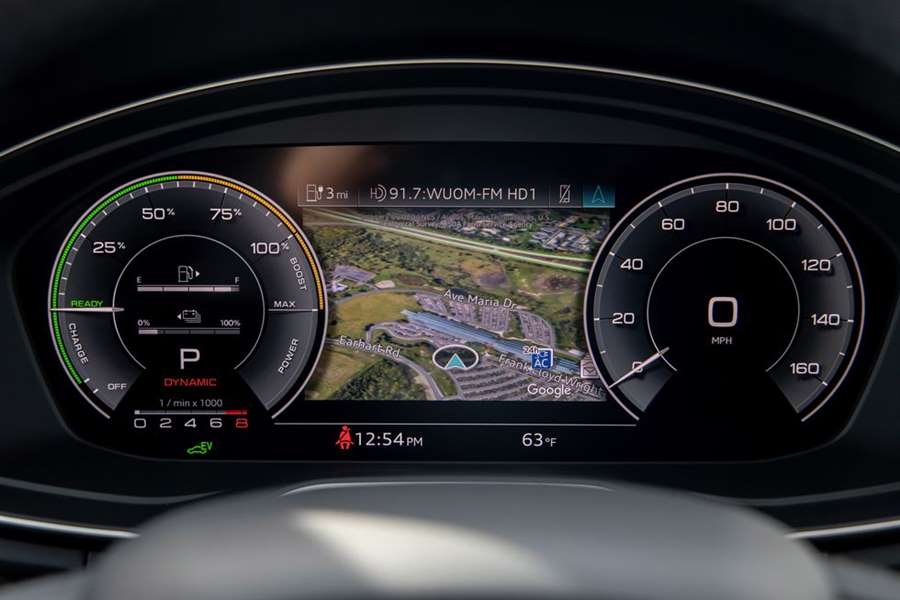 The PHEV's lithium-ion battery with 11.3 kWh of usable energy nets a 19-mile EPA rating for electric driving. If that seems modest, it's even more so than it needed to be, as Audi voluntarily lowered its label value from the 29-mile figure the Q5 earned during EPA testing. While in electric mode, the Q5's already quiet interior becomes noticeably more serene. The battery can be recharged in as little as 2.4 hours via a 240-volt Level 2 charging station, according to Audi, but takes considerably longer if you plug it into a conventional 120-volt wall socket. Compared with the standard Q5's EPA estimate of 25 mpg combined, the PHEV earns a 27-mpg rating after the battery's been depleted and 50 MPGe with it in the mix. 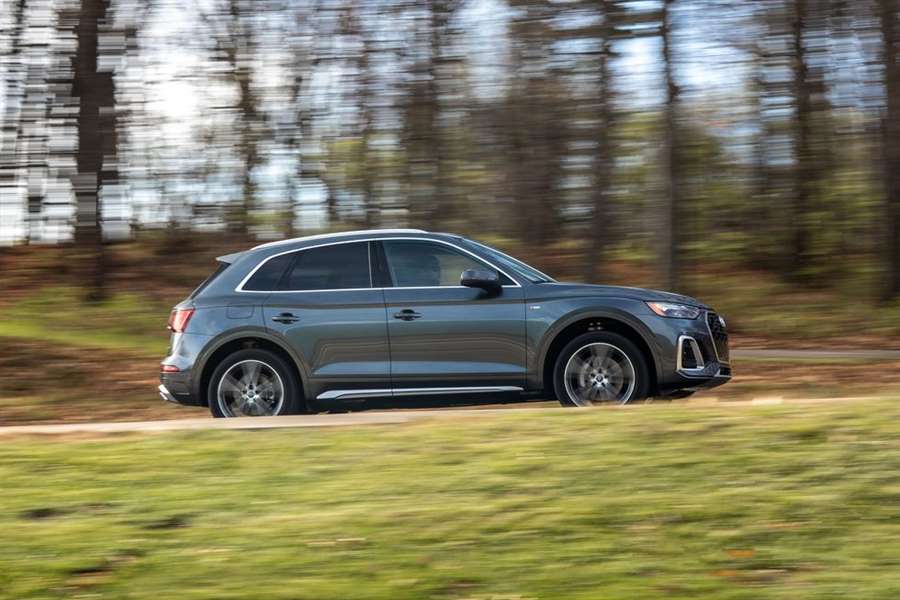 Inside, the Q5's cabin continues to exhibit the exemplary build quality we've come to expect from Audi. The updated MIB 3 infotainment system behind the standard 10.1-inch touchscreen is high tech and nicely integrated. But we did notice some latency in its responses to commands, and we're still acclimating to not having the previous MMI setup's rotary control knob. Wireless Apple CarPlay is now available, but Android Auto connectivity requires the use of a cord. Higher trims add Audi's excellent 12.3-inch Virtual Cockpit digital gauge display and its ability to sharply render full-width map data. Our main disappointment in the example we drove was the standard eight-way power-adjustable front seats, which we struggled to find a comfortable position in during longer stints behind the wheel. 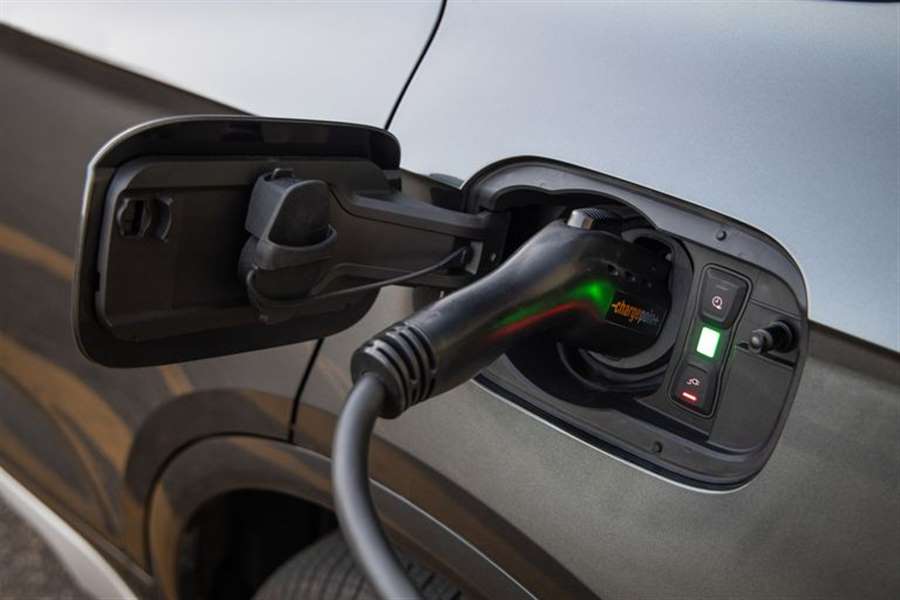 The Q5 55 TFSI e is available with Audi's typical Premium, Premium Plus, and Prestige option packages, with the latter pushing the plug-in's price to $62,795 with heated and ventilated seats, a head-up display with traffic-sign recognition, and a premium Bang & Olufsen stereo. Audi points out that federal and local tax credits have the potential to significantly lower the PHEV's entry point, limiting its upcharge over the standard Q5 and making the SQ5 a considerably more expensive proposition. For Q5 shoppers who can make use of its electric range, the plug-in's solid performance and luxury trappings could strike a just-right balance.