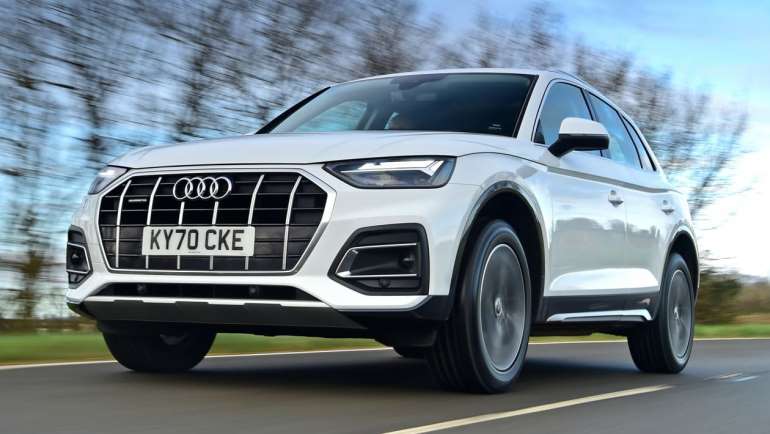 Verdict
The revised Audi Q5 offers useful updates when it comes to efficiency, performance and on-board technology. It still looks stylish inside and out, it’s well built and although it’s a bit dull to drive, it’s comfortable, refined and practical. The real surprise here in the most basic Sport trim is that it delivers impressive value for money, with a generous amount of standard kit.

Think premium SUV, and the chances are that you’ll think of the Audi Q5. From the way it drives to the way it’s built and how it looks, the Q5 has always been a solid choice. But the pace of development in this class is fast, so there’s a new version of the German firm’s mid-size SUV. 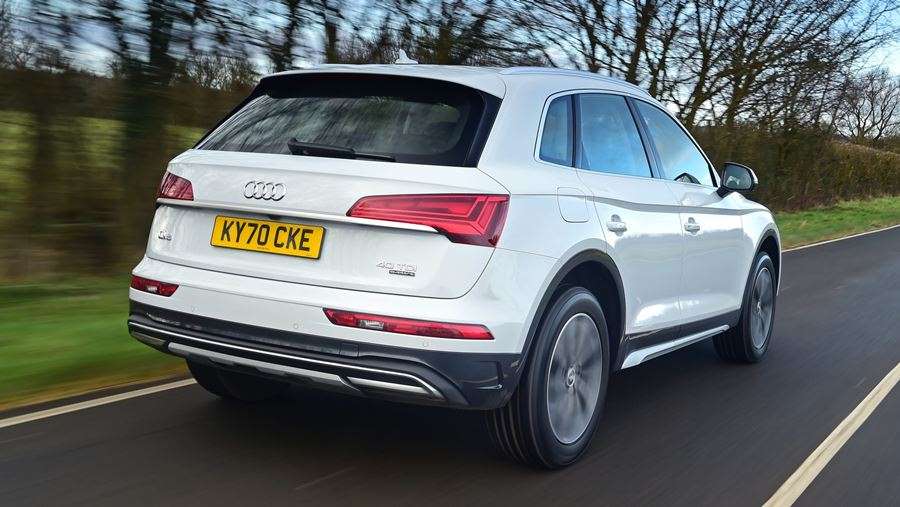 The updates focus heavily on technology to keep pace with newer models in the class, as well as revisions to the 40 TDI diesel model we’re testing here, making it cleaner and more powerful, thanks in part to mild-hybrid electrification.

The level of standard kit has taken a step forward as well, so even this entry-level Sport model could offer everything you’ll realistically need, even if on its standard 18-inch wheels it doesn’t look quite as sharp or as aggressive as the sportier S line trim that sits above it. Sport still receives new LED headlights and the same overall visual updates, with a larger, more pronounced grille that features some silver vertical bars to help it stand out. There’s a different design for the front bumper, too, while at the rear the changes are less significant. It’s a subtle but effective facelift overall. 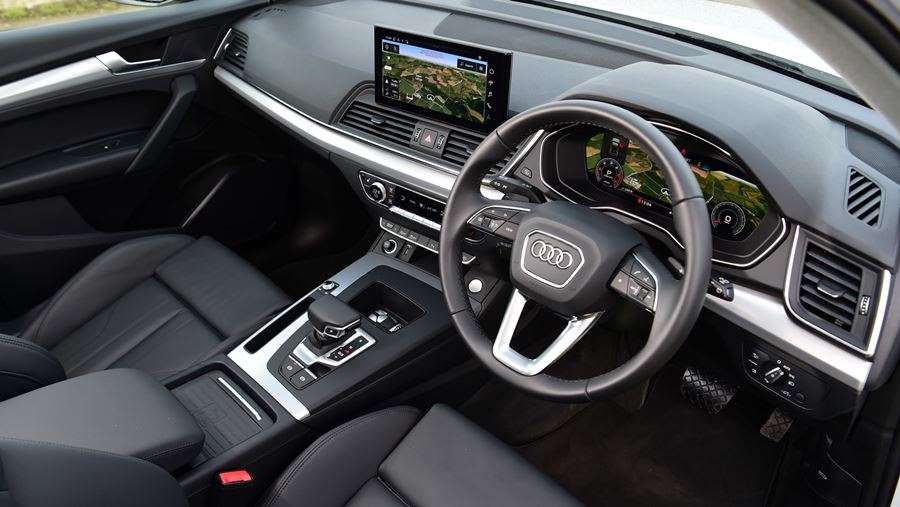 The SUV has also received the same treatment inside as its A4 and A5 siblings, with a new 10.1-inch central touchscreen as part of the MMI Nav Plus system that replaces the older scroll wheel on the transmission tunnel. There’s now a slightly awkward, rather shallow storage tray in its place, but build and material quality is still as good as you’d expect from an Audi, while the updated tech is sound. It works with the level of speed and response to your inputs you’d expect from a premium model, while there are lots of features, too.

There’s no real reason not to get on with the native system because the menus are fairly logical and easy to navigate, plus the graphics are great and the screen is well positioned in your eyeline (if maybe just a tiny bit too far away from the driver). But Apple CarPlay and Android Auto are also fitted as standard, so you can plug in your smartphone instead if you want.

On top of this you also get heated sports seats in Audi’s twin leather upholstery, three-zone climate control, cruise control, front and rear parking sensors with a reversing camera, and autonomous emergency braking with collision warning and pedestrian detection. 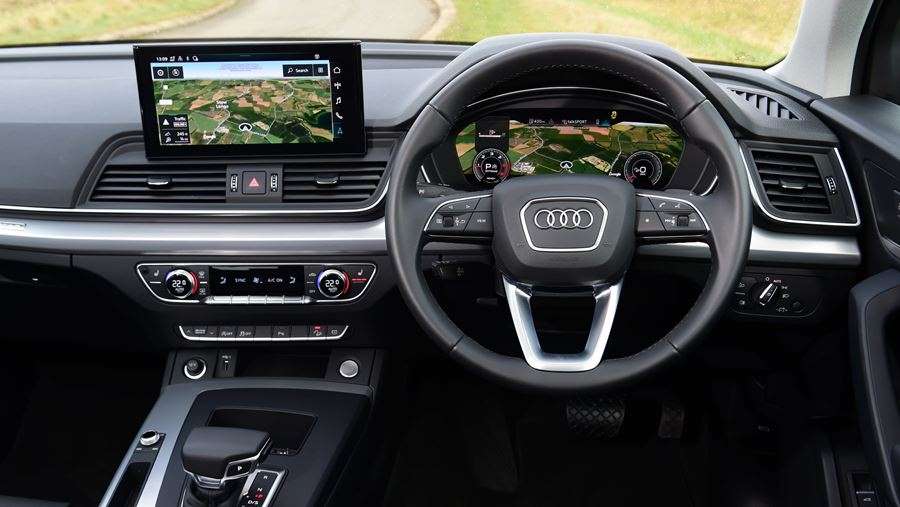 The Q5 inherits its predecessor’s full five-star Euro NCAP crash safety rating, which is an important feature for a family SUV like this.

Practicality is also key, and with a 550-litre boot – expanding to 1,520 litres with the useful 40:20:40 split rear seat bench folded down – there’s plenty of luggage room in the Audi. You even get a powered tailgate as standard to boost the level of flexibility on offer.

It’s not the biggest load bay in its class, but the Q5’s boot is far from cramped, and the same goes for the interior. You sit up high, as you’d expect in an SUV, and that’s possible because the seat base isn’t the longest, which brings your legs closer back towards you with a greater bend in your knees. But the Q5 offers plenty of legroom and doesn’t struggle for headroom either.

Practicality is pretty much unchanged then, and it’s a similar story when it comes to how the Q5 drives. That’s because it’s still based on the VW Group’s MLB Evo platform, with multi-link suspension all round.

Nestled under the bonnet of our test car is Audi’s updated 2.0-litre 40 TDI diesel, which produces 201bhp and a respectable 400Nm of torque. That’s 14bhp up on its predecessor thanks, in part, to the addition of a new 12-volt mild-hybrid system, which sees a belt-driven starter-generator (BSG) deliver a small hit of power and torque to assist when pulling away. 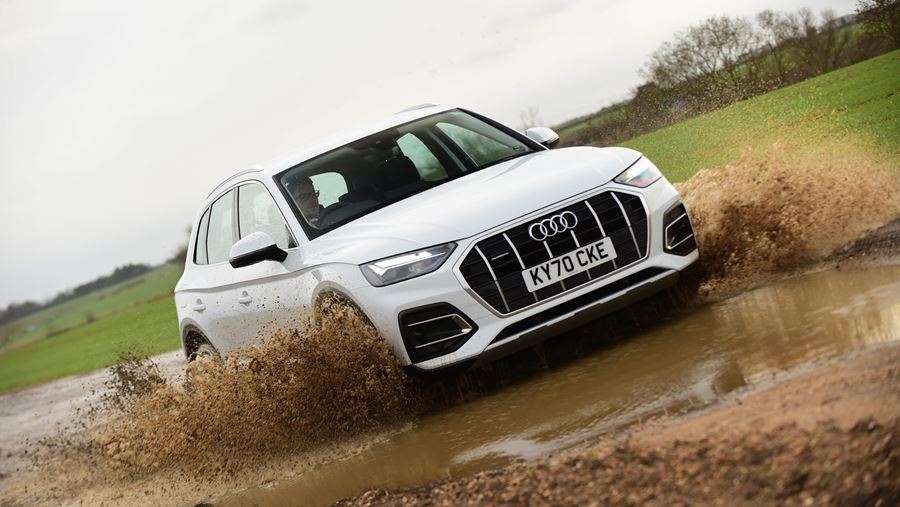 However, the mild-hybrid system has had a bigger impact on efficiency. The BSG charges a small lithium-ion battery when slowing down, which can be used to power ancillaries such as the climate control and electric power steering. In addition, the 2.0 TDI unit can cut out and coast at speeds of up to 99mph when you’re in the right driving mode, while the stop-start system activates below 13mph. It also makes things smoother when the engine does restart.

Claimed economy stands at 44.8mpg with 165g/km CO2 emissions, but while Audi is doing its best to make diesel less of a dirty word, it still feels like that in the current climate, the plug-in hybrid TFSI e will be a better bet for drivers seeking big efficiency and lower running costs.

Performance is strong, though, with some weight saving on engine components and the extra grunt delivering a 7.6-second 0-62mph time. In reality, nobody ever stretches their car’s performance to this degree all that regularly, but in conjunction with the seven-speed dual-clutch S tronic gearbox, the 400Nm of torque means it doesn’t kick down too many gears all that often when you want a more than moderate burst of acceleration.

Even if it does, the changes are pretty smooth – not whip-crack fast but well slurred to keep things relaxed – and the TDI unit’s sound is suppressed well enough that while it’s audible, it’s far from intrusive.

There’s little road noise too, helped by this car’s smaller wheels. They do look a little lost next to the big body, but they also improve the car’s ride quality.

The Q5 isn’t quite the most comfortable car in this class, but it rolls over ripples and imperfections in the road surface without too much fuss or transmitting a great level of shock or body movement, so it’s a smooth cruiser.

It isn’t the most dynamic option, though. The steering isn’t quite as direct as we’d like, even for an SUV (those big tyre sidewalls probably don’t help matters), while there’s some roll. But the Q5 is dynamically tidy enough to suffice; it’s comfort that matters more in a car like this, which it delivers, but the Audi is a bit dull when it comes to any sense of engagement.

Tagged under
More in this category: « Audi A3 Sportback hatchback review Audi A4 saloon review »