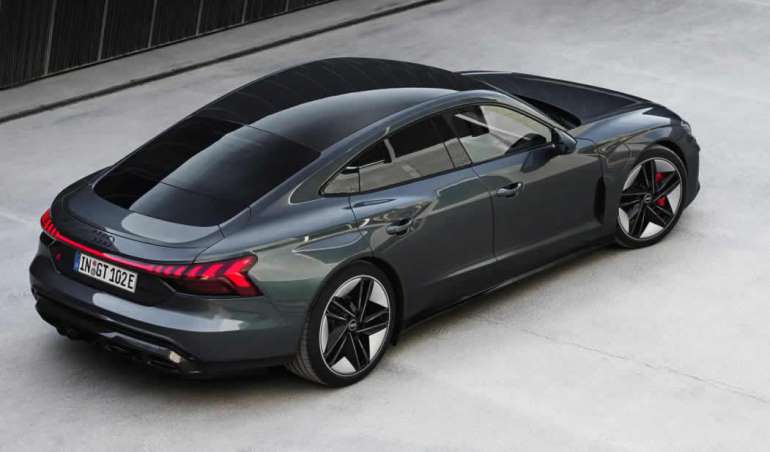 Audi has unveiled off its latest electric car, the new E-Tron GT. It's the second bespoke EV in the Audi range, and is closely based on the highly impressive Porsche Taycan. It's a four-door coupe that's set to go on sale in the UK later in 2021.

As well as sharing its basic proportions with the Porsche Taycan, the E-Tron GT will look familiar to anyone who is familiar with industry news. It is very similar to the concept car of the same name first shown at the Frankfurt motor show back in 2018. It's unusual to see a production car look so like a concept car like that, but this is no bad thing.

When it goes on sale, the cars it needs to beat will be the Porsche it's so closely based on and the evergreen Tesla Model S, which has just received a raft of improvements for the 2021 model year. Audi will have an advantage in terms of build quality and interior finish, but the Tesla gets a massive advantage from its Supercharger network of high-speed public chargers.

From launch, buyers will have a choice of two models: the e-tron GT quattro and RS e-tron GT. Both versions use an electric powertrain featuring a motor mounted on each axle for four-wheel drive.

What's it like inside?
If you've experienced any top-end Audi launched since the current A8, the interior of the E-Tron will will reassuringly familiar. It loses that car's three-screen set-up, but you still get the latest 12.3-inch Virtual Cockpit instrumentation as well as a generously-proportioned 10.1-inch central screen for the infotainment set-up. There are physical buttons for the climate control system. 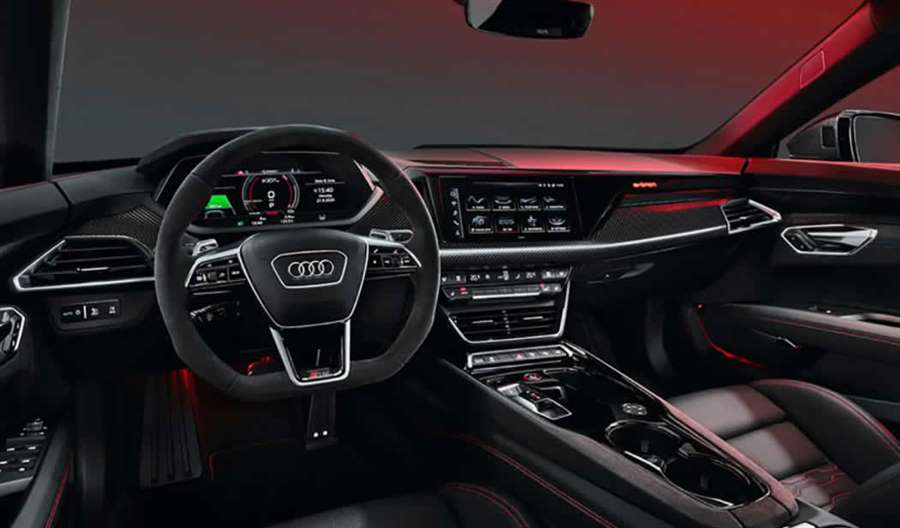 In addition, it's packed with equipment as you'd expect - so there are heated seats, user-configurable interior lighting, and these can be individually set-up for up to six users. There's an optional head-up display, and you can control all of this via the screens, buttons on the wheel and by Audi's latest iteration of its voice recognition system. You can also specify it with an autonomous self-parking system.

There are Vegan trim options including Dinamica and Kaskade, which are supposed to feel like Alcantara and wool. The more-sporting RS E-Tron GT will be available with microfibre trim for the dashboard and contrasting stitching for the steering wheel and centre console. You want open-pore walnut or carbon fibre? They're all there for you.

Practicality should like the Porsche Taycan - so a generous interior for four people, while Audi says the luggage capacity is 405 litres - about the same as a Volkswagen Golf with the rear seats in place.

Audi E-Tron GT charging and range
Audi is going for maximum efficiency here. It's super-sleek for the least air resistance at speed. Audi says that the new E-Tron GT has a drag coefficient of just 0.24Cd, which means it has one of the most aerodynamic bodies on sale today. What that means for you is that there will be low levels of wind noise at speed, and it will go longer without stopping on the motorway.

Both the E-Tron and RS E-Tron GT have the same generously-sized 93kWh battery pack (with a usable capacity of 85kWh). Audi says that will deliver a maximum range of 298 miles, although official figures are yet to be released.

The E-Tron GT will accept the latest rapid chargers, like the Porsche Taycan. What that means is you'll be able to hook it up to a 270kW public charger and give it an 80% charge in just 23 minutes. Or to put it another way, you'll get 62 miles of range for every five minutes of rapid charging. On a standard UK domestic wallbox, to fully recharge from empty will be an overnight operation, while using a three-pin plug should be just for emergencies...

How fast is it?
If you're looking for a surge of electric acceleration, you won't be disappointed. The entry-level E-Tron GT develops 475hp for a claimed 0-62mph time of 4.1 seconds. Maximum speed is 152mph, but as you can imagine, battery range will be severely compromised the closer you get to that speed.

The RS E-Tron GT is considerably quicker and more powerful. Maximum power is 600hp, although the car’s launch control system can temporarily increase power to 655bhp. Acceleration is boosted - 0-62mph time comes in at 3.3 seconds and the maximum speed goes up to 155mph (limited).

RS E-Tron upgrades
The sporting RS models will be available from launch and come with a whole range of upgrades to reflect their status as the ultimate E-Tron GT. It's visually different with a restyled bonnet and a sportier-looking bodykit. The front bumper is also deeper, while at the rear you get a less subtle-looking diffuser. Adaptive dampers lower the car at speed, while laser headlight technology on the RS will make night driving easier.

How much does it cost and when is it on sale?
The E-Tron GT will launch in two versions, the E-Tron GT Quattro and the RS E-Tron GT. Both go on sale in spring 2021 with UK deliveries to follow shortly after. The prices of all the various trims can be found below.