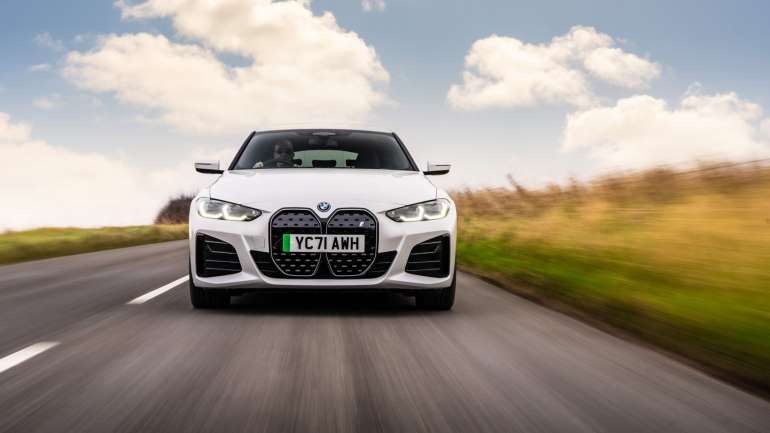 It's been a long time coming, but BMW has now finally begun kicking the combustion engines out of the core of its model range. While this new i4 might not quite be the electric 3-series some of you are probably crying out for, being based on the same body-in-white as the 4-series Gran Coupe means you get a similar degree of passenger practicality alongside a swoopier roofline and a hatchback tailgate.

What's more, BMW has come in swinging with a two-pronged attack. Do you want properly good range or do you want potent performance? The i4, in its two current specifications, can provide either. There's the eDrive40 (pictured in white), with one motor and rear-wheel drive, developing 335bhp and a claimed range of 367 miles. Or there's the mighty M50 (pictured in grey), a 537bhp twin-motor all-wheel drive machine that also happens to be the first ever all-electric M-car. 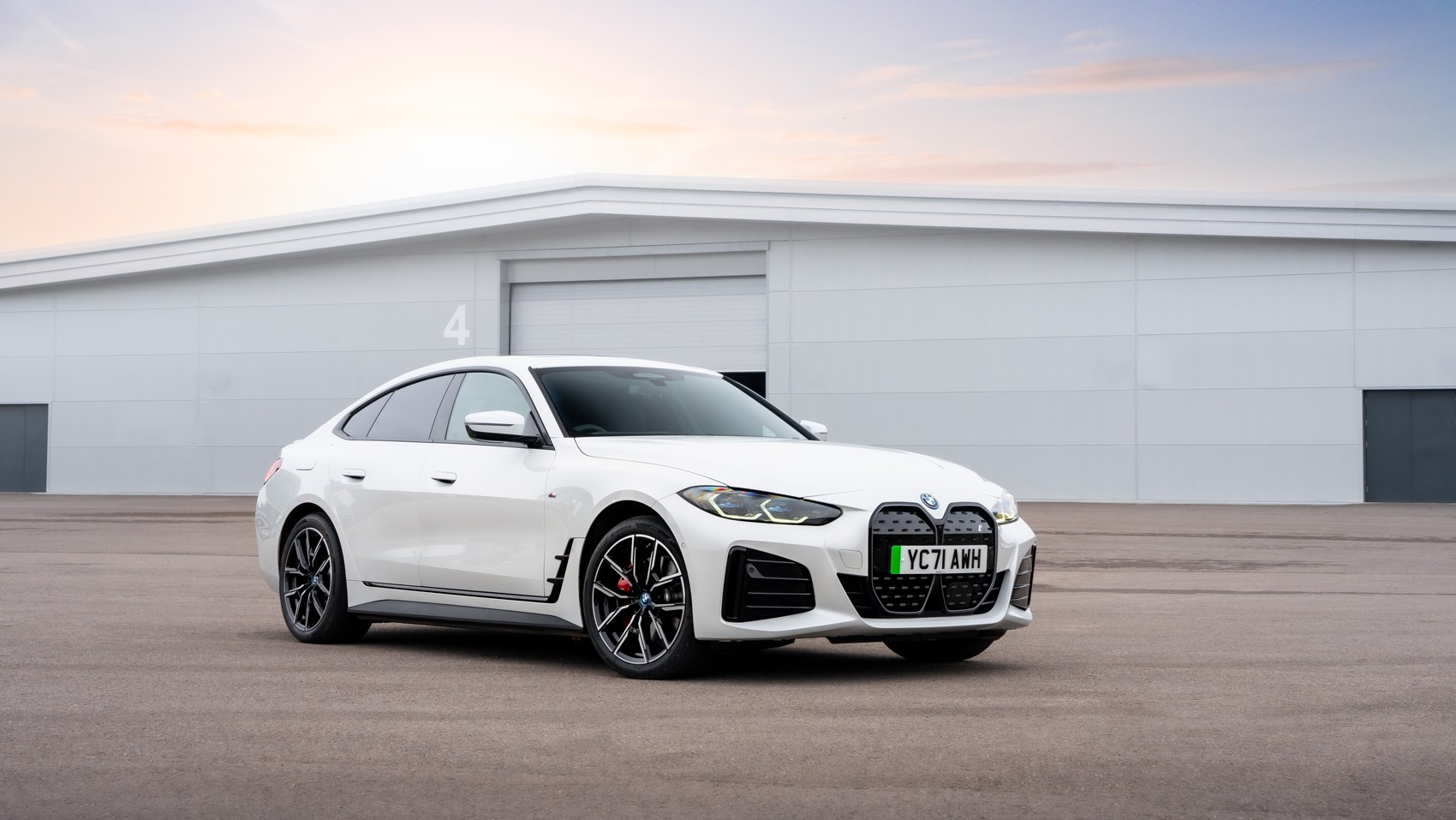 Does the i4 use the same technology as the iX?

The i4 does without the fancy part-carbon construction of the iX, but takes full advantage of all the same Gen5 BMW electric drive tech.

This means clever electromagnet motors and the latest, high-density batteries, working together with highly integrated control systems that cover everything from the way the electric power is deployed across both axles (regarding the all-wheel drive i4 M50) to the manner the car is brought to a stop, using a seamless combination of recuperation and friction braking. 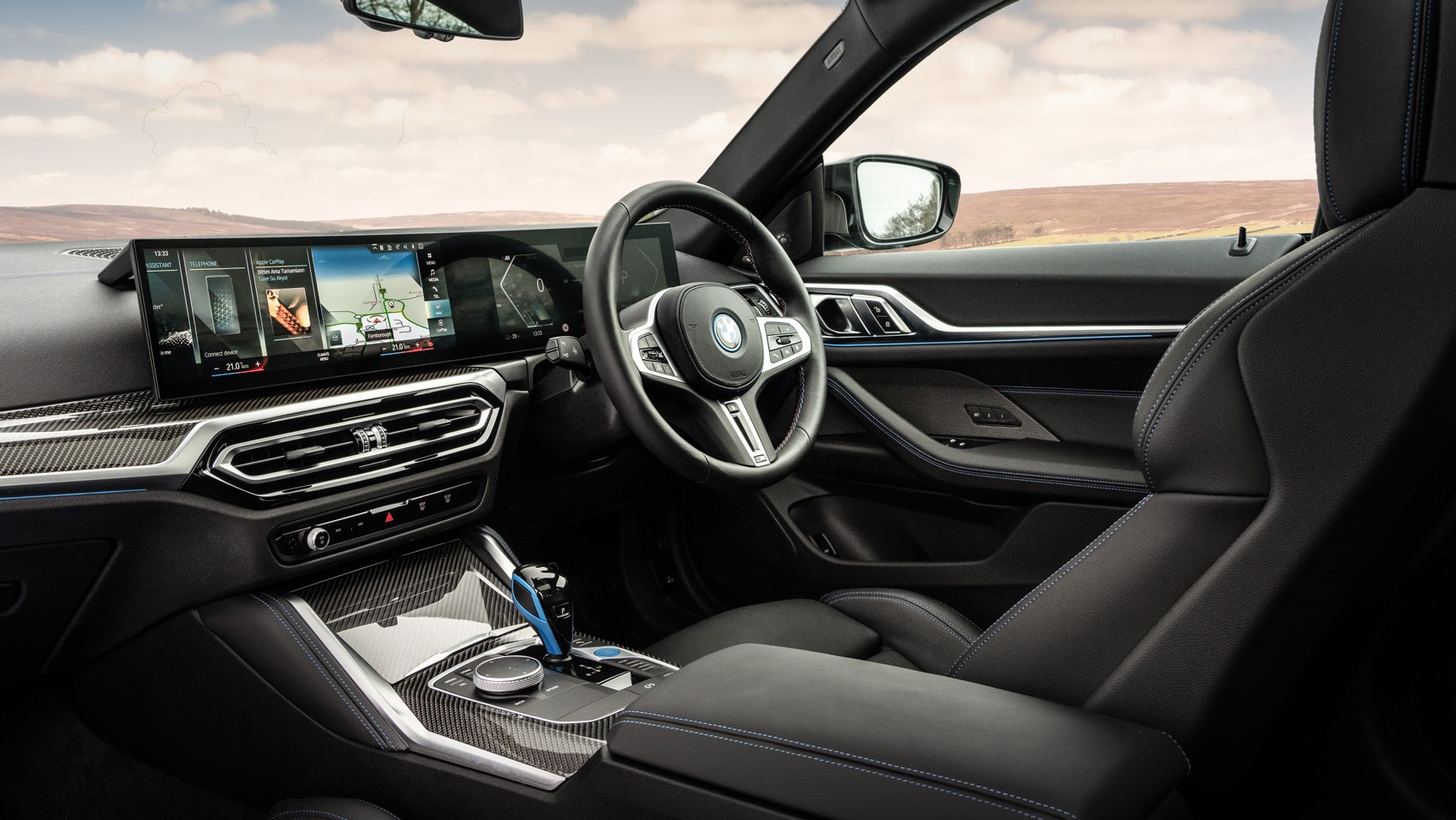 But the i4's also circa-300kg lighter than the iX, can be charged at up to 205kW DC – giving you an 80% boost in as little as 31 minutes (though good luck finding a charger quite that juicy in the UK) – and has slightly more power and torque. You'll also note the same dual-screen BMW Curved Display setup as the iX inside – with the same BMW Operating System 8 iDrive infotainment, augmented nav and situational awareness.

Best of all, the i4 is considerably cheaper than the iX. And though that still means handing over at least £52k for an eDrive40 or £64k for the M50, even that represents at least a significant saving over the iX thus far. Given a lot of the technology is the same, the i4 justifies itself somewhat even before you press the start button.

And when you do press the start button?

Regardless of which i4 you pick, it's a potent machine. Just because the eDrive40 only has one e-motor doesn't mean it plays a poorly second fiddle to the M50 here. While we're wowed by the immense performance on offer of the M-badged version, the eDrive40 is still pretty sprightly – keeping toe-to-toe with a stock Tesla Model 3. 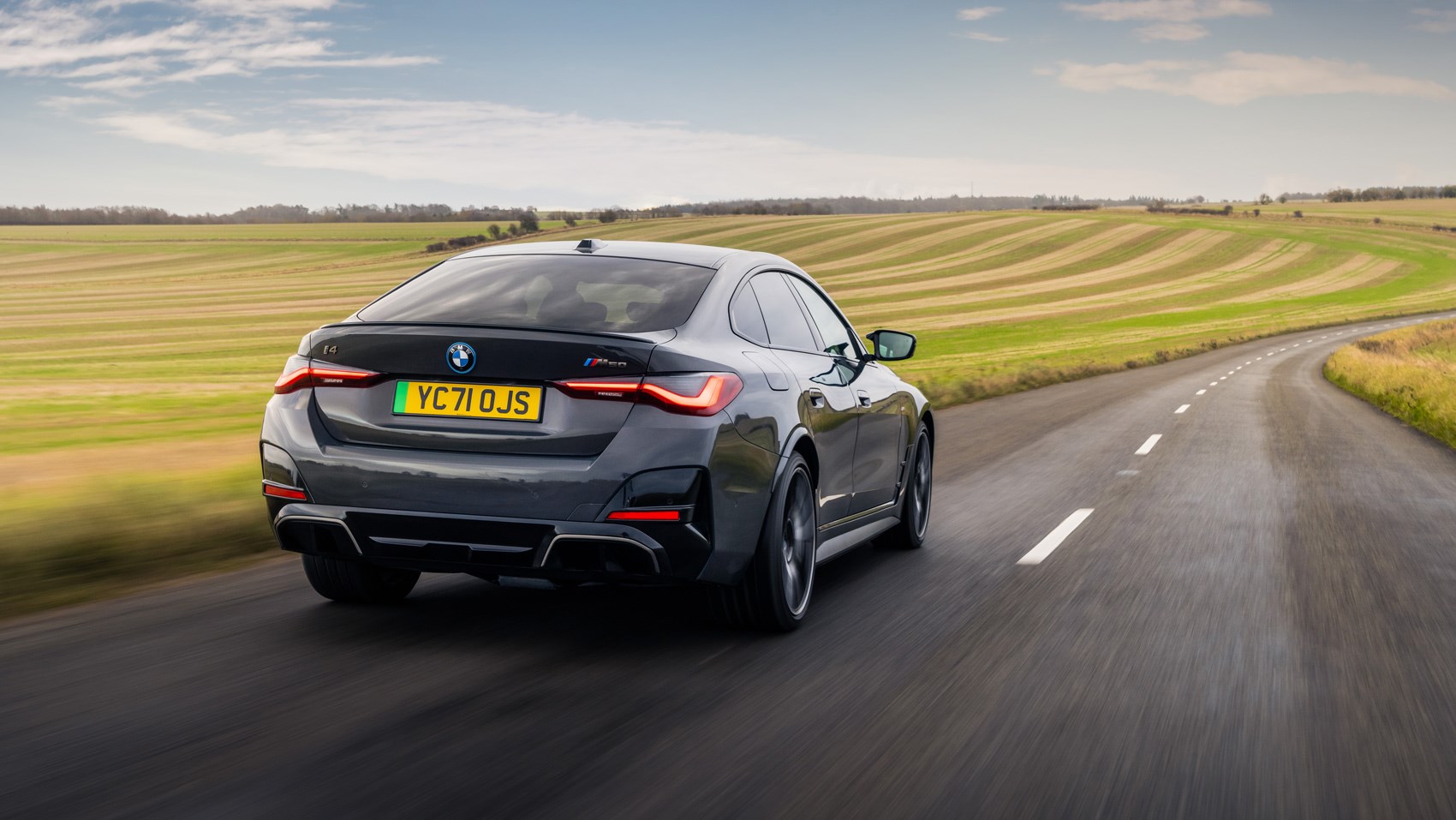 And though the i4 M50 is more powerful than an M4 – and certainly more muscular, with a stonking 586lb ft available instantly – it's also around 300kg heavier than it. So, while it easily matches the (503bhp, 479lb ft) M4 Competition's 3.9sec 0-62mph time, visually and dynamically it's more of an M Performance model than a full-blown M3 replacement.

Generally? It's comprehensively impressive, and quite the all-rounder. Both are potent – regardless of setting, stab the accelerator and the i4 reacts with the kind of instant thrust that makes you think of computer games. There's a Hans Zimmer-developed sountrack to accompany it in Comfort and Sport mode (some of the CAR team like it, other's don't – you can turn it off if you're that way inclined). 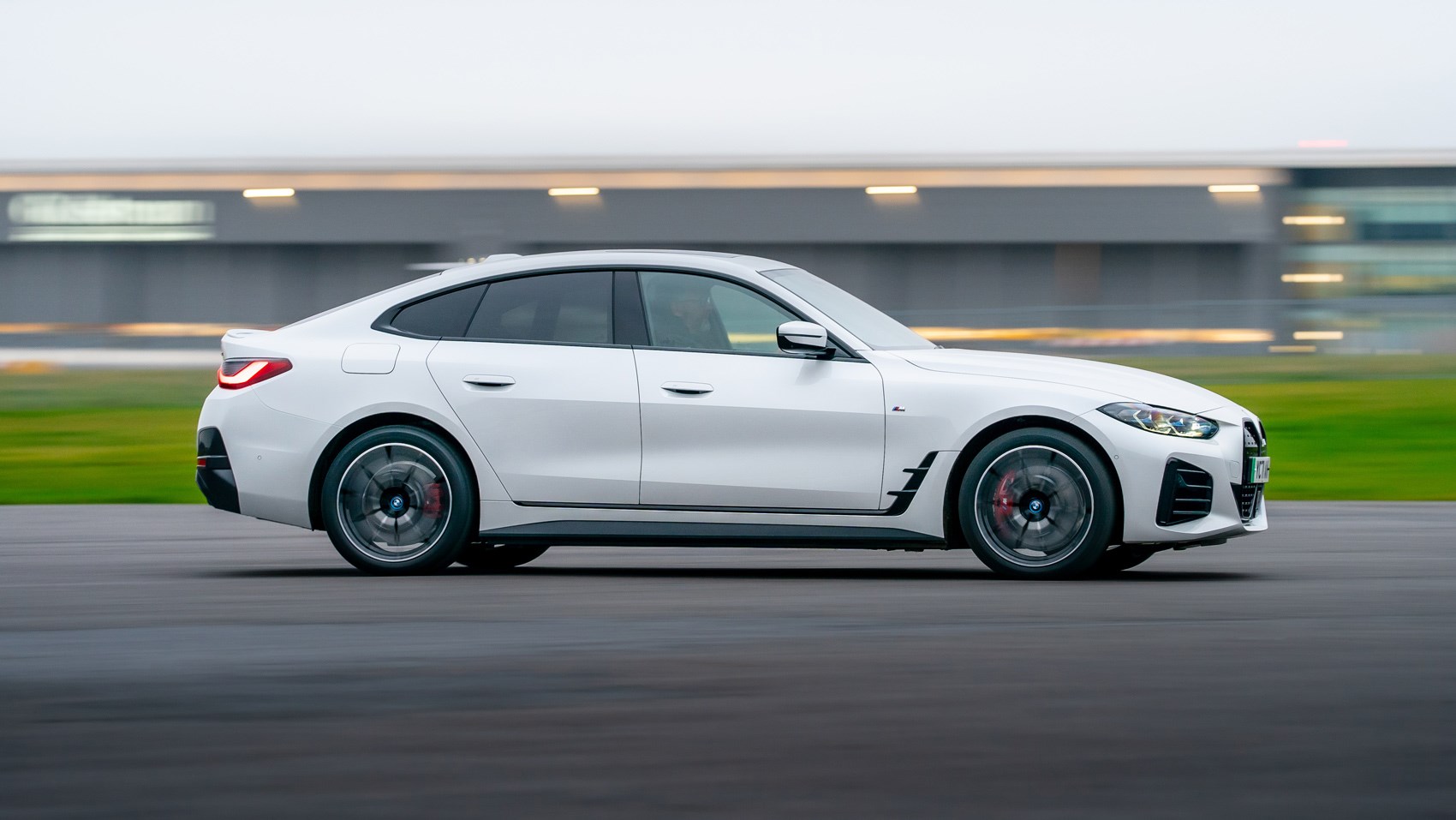 Interestingly, you don't get the full 537bhp and 586lb ft all the time in the M50 version – default output is a mere 476hp and 538lb ft, with the full whack only unlocked using the Sport Boost function that features as an add-on to the regular Sport Mode. When you do stamp on the throttle here, the M50's nose points at the sky. But BMW claims it's simply due to the sheer amount of torque the M50 is deploying with such little fanfare – and equally nothing to do with the back of the car being equipped with air springs instead of the conventional steel coils that are still used at the front.

It's quite unusual to see that combination on a performance car – more typically rear air is use for self-levelling on fancy estates. Together with the VDC, however, it gives the i4 M50 really superb level of comfort, even if you insist on travelling everywhere in Sport. BMW's nailed the ride quality here – treading the fine balance between cossetting comfort and sharp body control.

Push hard in both versions of the i4 and different personality traits shine through. We'd argue the eDrive40 is the more 'fun' car here, despite being less powerful; it's rear-drive only, remember, so it exhibits those most classic of BMW traits – playfulness at the limit and a tail end that can be egged on to pivot just a little beyond your steering angle. It's quite the hoot.

The M50, meanwhile is a little blunter in its delivery. Traction is still otherwise immense, and you can still make it dance as long as you're not being utterly ham-fisted with the steering, but it does err on the side of understeer if you drive hard into corners. And, if you floor it on a corner exit, the traction control is the king of buzzkill, flashing at you from the instruments while what feels like almost all of the power being snatched out of your hands. Or right foot, we suppose.

In most respects, the i4 is just as much of a cutting-edge electric car experience as the iX, wrapped up in much less controversial and conventional packaging.

It's a car that you warm to as time goes on, rather than instantly enjoy. And, if you were expecting a full-fat M car in the M50 version, it just ain't it – too rounded, polite and understeery for that honour. If we had to choose, we'd go for the eDrive40 version – the range is longer, it feels about 80 per cent as quick as the M50, is more playful and is abour £10k cheaper.

But regardless of which one you do end up with, there are still so many trad BMW traits in here: alert steering, impressive ride and handling balance, a clean, well-built and user-friendly interior and plenty of power being just some of them. While a Tesla Model 3 is an on-trend show-stopper, the i4 proves BMW knows what it's doing when it comes to electric cars.