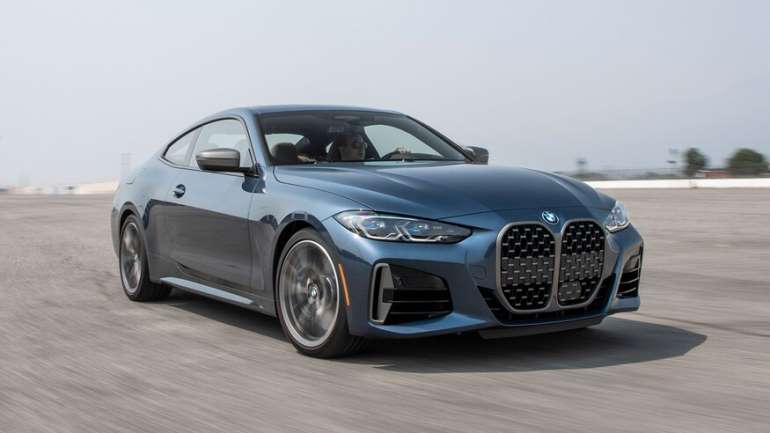 It drives better than it looks but doesn’t justify those M badges. Is that a bad thing?

Mt. Baldy road is hardly more than an hour's drive from downtown Los Angeles, yet it evokes European alpine passes—those that lead from metropolises to epic vistas and crisp mountain air. Breaking off from the freeway, it crosses a quiet suburb before opening into long sweepers weaving up the hillside. In the final climb, it crinkles into tight switchbacks before terminating at a tiny rural ski resort. It's the type of road cars like the BMW M440i xDrive were made for.

No longer is the 4 Series simply a two-door 3 Series. As that iconic sedan preserves its dynamic focus, the 4 Series evolves and now offers a blend of luxury and performance once reserved for BMW's highest-end models. It's a balance that'll leave some drivers in bliss and others wanting more.

Is The M440i Quick? Yes...
Behind those atrocious oversized kidney grilles is a smooth, turbocharged 3.0-liter I-6 making 382 hp and 364 lb-ft of torque, sent through an eight-speed automatic to BMW's xDrive all-wheel drive system. It's a potent setup. Using the sportiest drive modes and a bit of pedal overlap, the M440i leaps to 60 mph in 4.0 seconds flat, and cuts the quarter mile in 12.6 seconds at 110.2 mph.

Acceleration is the most M-ish thing about this car—to 60, it's as quick as an X3 M Competition and not far off the pace of the last-gen M3. Yet the M440i's engine is just as happy to calmly loaf about as it is to rush to redline. All the while it revs with a sweet (but perhaps digitally enhanced) growl.

Swat the paddle shifters and gears change obediently, even if they aren't dual-clutch fast. Grab an upshift under heavy throttle, and the car replies with a nice little kick. Or, just leave it in automatic and cruise, letting its computers softly select the right gear.

M-emblazoned brake calipers clamp ventilated rotors for a 109-foot stop from 60 mph. That deceleration splits other performance-oriented BMWs; the M340i stops in 111 feet and the M2 Competition in 106 feet. The brakes feel reactive and provide a linear buildup of stopping power. But pedal stroke is long, making it hard to gauge how much of a press is needed to get the desired effect. The reactivity makes them a bit grabby at lower speeds, while the long stroke didn't inspire confidence when approaching those mountain hairpins.

With MotorTrend test boss Kim Reynolds at the wheel, the M440i posted a 24.7-second, 0.78g-average lap on the figure-eight course. On the skidpad, it stayed stuck up to 0.93 g. That's impressive when put into context against other sporty all-wheel-drive cars. The Quattro-packing Audi S4 lapped the figure-eight in 25.2 seconds at 0.75 g. The Mercedes C43 with AMG-ified 4Matic did the same in 24.8 seconds at 0.77 g. Both circled the skidpad at 0.91 g. After assessing the 4 Series, Reynolds called it a "very powerful car that's propelled fast to the next corner with modest tail-out drift exiting."

True as that may be on the test track, don't expect the xDrive system to provide tail-happy hijinks without serious provocation. Drivers with sub-Reynolds skill levels will find it feels as all-wheel drive as can be. On Mt. Baldy's switchbacks the M440i was extremely reluctant to rotate, instead rounding the bends with staid neutrality. Going to throttle early just brought understeer with overly cautious stability control intervention. On sweeping curves it provided superb high-speed composure but little excitement. And this was in Sport Plus mode, in a car equipped with the "ZTK" cooling and high-performance tire package.

Further undermining the numerous M badges is the paucity of steering feel. Like in the M8 Competition, the abject lack of sensation coming through the wheel results in a dilution of fun. It feels numb, insulated from whatever's going on under the front tires, not made better by its lightness and somewhat slow ratio. Sure, it's accurate, and the car goes where the driver wills it. But it's not quite agile, while the anesthetized sensations make grip levels vague. That mystical bond between driver and machine that BMWs were once known for simply isn't there.

Also lacking feel is the ride—but that could be a good thing, because here the M440i feels more like a grand tourer than a sport coupe. Whereas 3 Series models with M Sport suspension hammer their occupants over every road imperfection, the M440i rides comfortably, effectively erasing cracks and chatter, only ever slightly rough over large potholes. Although it's compliant and not floaty, more feeling through the suspension would give a better sense of connection to the road during spirited driving. Any other time? It's luxe.

Continent-cruising comfort persists in the cabin. The plush front seats feel like lounge chairs with side bolstering. In a real surprise the back seats are actually somewhat usable. There's a decent amount of space, and dedicated air vents, USB ports, and storage cubbies show that BMW didn't make the 4 Series' second row an afterthought. Faultless driver-assist technologies make highway driving a breeze.

Although the 12.3-inch digital gauge display isn't as customizable as equivalents from German competitors, BMW's latest iDrive revision is more user-friendly, and its 10.3-inch touchscreen is bright and clear. Crisp, thumping sound pours out of the optional 16-speaker Harman Kardon premium audio system. Material quality is high, although the layout is essentially identical to any other current BMW, a mere evolution from the previous 4 Series. A more inspired interior seems warranted for a car that makes such a daring design statement outside. Then again, perhaps the austere cabin offers a refuge from the sight of that egregious grille.

Is The M440i A Proper M Car?
There's no doubt that the M440i drives better than it looks. Understand, though, that it isn't a 3 Series coupe. Like the finest GT cars, the M440i is capable but distances its driver from the machinery underneath. It's powerful, poised, and easy to drive fast. Yet there's incredibly little sensation of speed, and the feelings of connection and involvement that true driver's cars offer are all but absent. Maybe the M4 will fix that.

Instead, the M440i feels more like a miniature 8 Series: a smooth, calm haven to cruise in that'll still indulge in full-throttle blasts. Like a proper grand tourer, it'll waft through town, tear across interstates, and oblige some corner carving—exactly as it did up Mt. Baldy road. Just don't be misled by all those M badges.