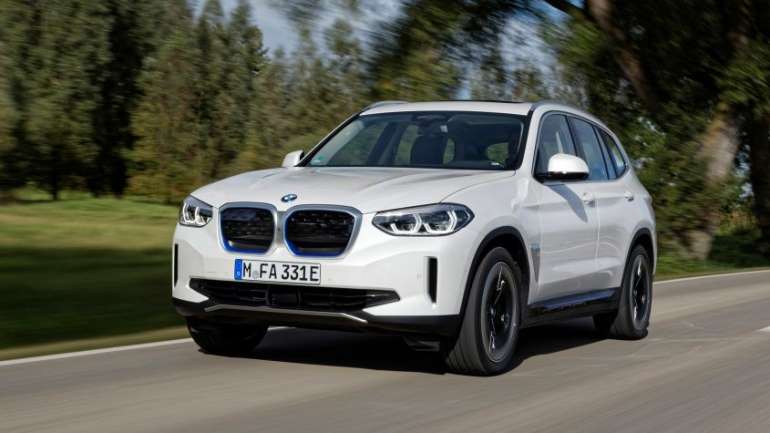 While BMW wowed the world with its i3 electric hatchback and i8 plug-in hybrid coupe, the all-electric BMW iX3 SUV is altogether a more staid proposition. This time round BMW is taking a similar approach to Peugeot and Hyundai by serving up an electric version of a car it already sells, namely the BMW X3.

There's been a deliberate decision not to go radical with the design, with BMW instead opting to add aerodynamic wheels, blue trim accents and a smoothed-off grille. There are also a new set of bumpers and side skirts, all tested to ensure they are slippery enough to help maximise the driving range. This is really just an X3 for buyers who want an electric powertrain.

Under the car's floor is an 80kWh battery that sends its power to a rear-mounted 282bhp electric motor. This is a departure from rivals like the Audi e-tron, Jaguar I-Pace and Mercedes EQC, which all have two motors, four wheel drive and quite a bit more power. While it isn't as fast as them, the iX3's 285-mile range is competitive, beating both its German rivals and just slightly behind the I-Pace. The Jag’ struggles to hit its official figure in real-world driving anyway. 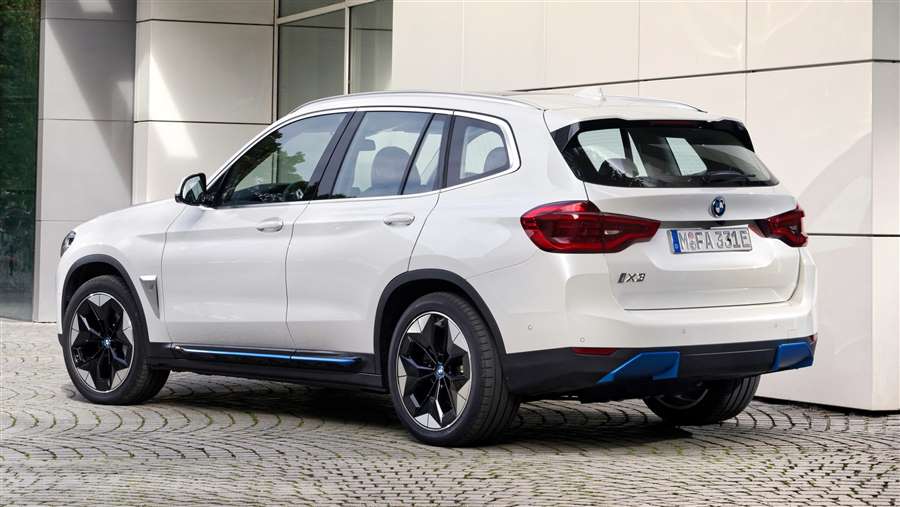 It can also be charged quickly, obtaining speeds of up to 150kW at the latest rapid-charging stations. Of its closest rivals, only the e-tron can match this, with the others topping out at around 100kW, and it means the iX3 battery can be replenished to 80% in a speedy 34 minutes. Thanks to this capability, making one stop on a long journey should be ample to get drivers to their destination with range to spare.

Like the exterior, the inside of the iX3 is very much a mild variation on the X3, with some flashes of blue trim to show this is the electric version. It shares the same 10.25-inch iDrive infotainment display perched above the dashboard and a 12.3-inch digital instrument screen. Premier Edition and Premier Edition Pro trims serve up plenty of equipment, with features like a head-up display, a Harman Kardon stereo and wireless phone charging in the top trim.

The BMW iX3 is spacious, quiet and has a good range, but it's a shame it doesn't feel anywhere near as special as the i3 and i8. Instead, it ushers in an era when electric BMWs will be a more mass-market part of the line-up.

By adding an EV option to its popular X3 range, BMW boasts that customers can now choose between four different powertrains for its mid-size SUV. It adds to the existing petrol, diesel and plug-in hybrid range, giving low to medium-mileage drivers the chance to shun traditional fossil fuels altogether.

The iX3 has an 80kWh battery beneath its floor, allowing it to cover up to 285 miles on a charge. That's competitive with the 298-mile range of the Jaguar I-Pace, and betters the 237 and 256-mile range of the Audi e-tron and Mercedes EQC respectively.

Like the e-tron, the iX3 also supports rapid 150kW charging at compatible public locations, topping the battery up to 80% in just 34 minutes. The Mercedes and Jaguar can be topped up at around 100kW, so take longer to recharge.

As with any electric vehicle, the iX3 has the potential to significantly reduce running costs for the owner, and we particularly enjoyed one new feature for its energy recuperation system. Like most new EVs, the braking effect of the electric motor can be set to low, medium or high, and with practice it's possible to drive the iX3 in traffic with almost no use of the brakes. However, BMW has also added an ‘Adaptive’ setting, which automatically adjusts the recuperation to match the car ahead, a bit like adaptive cruise control for braking alone. It works well, carefully adjusting the regenerative effect to match cars in front, even when they modulate their deceleration.

Thanks to its zero emissions, the iX3 qualifies for free car tax and 0% BiK for company-car drivers in 2020/21.

Insurance groups
The insurance band for the iX3 hasn't been announced yet but it's likely to be fairly high. We say this because its rivals are all costly to insure, with the I-Pace in group 49 out of 50 and the Audi e-tron in the very top group. However, the iX3 is the least powerful of the group, so could be a few groups lower.

Warranty
BMW sells all its cars with a three-year/unlimited mileage warranty, which is on a par with Mercedes and slightly more generous than Audi (with a 60,000-mile cap). Tesla models come with a four-year or 50,000-mile warranty. It's likely the BMW iX3 will have a longer warranty covering its battery (many rivals offer eight years of cover), but details of this have yet to be announced.

Servicing
BMW models are fitted with an array of sensors to determine when servicing is required, so there isn't a strict routine to stick to. Typically, services won't be more than two years or 20,000 miles apart, and isn't the cheapest. BMW does offer servicing packages though, making it possible to spread the cost over monthly payments.

Unlike its rivals, the iX3 gets a single electric motor powering the rear wheels. This means it isn't as quick as the dual-motor Jaguar I-Pace in a straight line, but it still gets a sporty setup in typical BMW fashion.

In fact, it would have been better if BMW had made the suspension softer because in its pursuit of agile, fun handling, ride comfort has been compromised. Even in the softest Comfort mode, the iX3 fidgets and seems to find bumps in the road that look inconsequential from behind the wheel.

This chassis setup and the low-slung battery does at least mean the iX3 corners with little body lean, while the steering is fast to respond, if lacking in feel. Sport mode makes the steering heavier but also renders the suspension too bouncy, so we quickly turned it off.

The iX3 is powered by a single 282bhp electric motor at the rear axle, giving it a 0-62mph acceleration time of 6.8 seconds. This should be plenty quick enough for most SUV (and EV) buyers, but it's some way off rivals. The Audi e-tron, Jaguar I-Pace and Mercedes EQC all feature front and rear motors, providing more power and four-wheel drive.

The iX3 accelerates very quietly, with just a distant whine from its electric motor. If you prefer, you can also choose a louder sound thanks to 'balanced' and 'sporty' settings. The iX3 glides away from a standstill smoothly, with instant pulling power doing a good job of disguising its 2,185kg weight.

Unlike the daring BMW i3 and i8 models that set out BMW's stall as a designer of forward-thinking green models, the iX3 is a much more conventional model that's also available with electric propulsion. This will make sense for many customers, while others may view it as a bit of a disappointment. 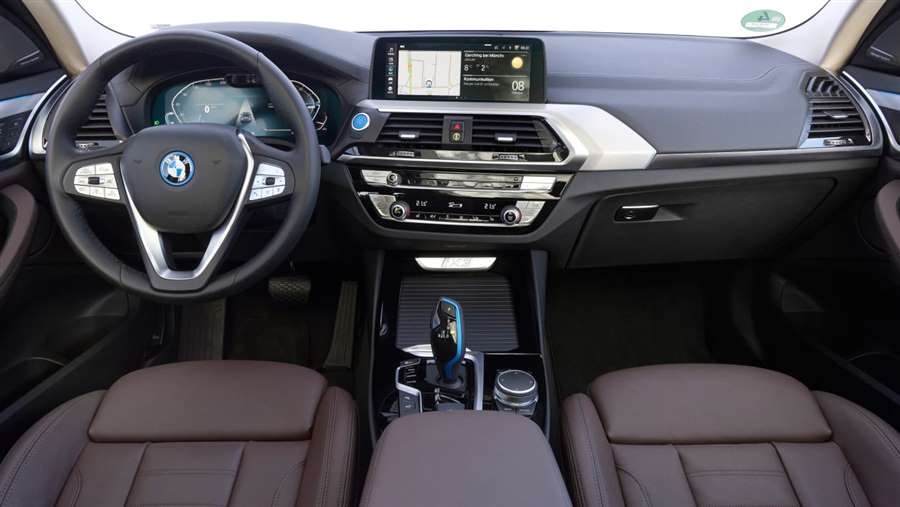 If you've sat in a BMW X3, there's very little change here apart from some blue flashes of colour for the BMW badge and gearlever. The steering wheel with silver buttons is new, while a 10.25-inch infotainment display and 12.3-inch digital instrument cluster is carried over, with Apple CarPlay and Android Auto.

Materials are of a high quality and the infotainment software is amongst the best in the business, but there aren't any novel features like trim made from recycled bottles or cork, as seen in many environmentally conscious models.

Premier Edition Pro is distinguished by large 20-inch aerodynamic alloy wheels, along with a powered tailgate, adaptive suspension and a panoramic sunroof. It also boasts a plethora of tech like a head-up display, Harmon Kardon stereo, gesture recognition and a BMW IconicSounds Electric soundtrack developed with famous composer Hans Zimmer.

If there are concerns the iX3 is compromised compared with the regular model, fear not. It's virtually as usable for a family of five as the petrol or diesel car, and the boot is actually larger than the one in the plug-in hybrid BMW X3.

There's plenty of space for adults in the front and back of the iX3 to stretch out, with the battery placed out of the way beneath the car's floor. In reality, most won't need the extra space found in the larger BMW X5 but there's no option of a third row of seats to make the iX3 into a seven seater.

Boot space
The iX3 has a 510-litre boot, which is 40 litres smaller than the petrol and diesel BMW X3 offer. In reality, most will be hard pressed to tell the difference, and surprisingly this is 60 litres more than the plug-in hybrid version of the X3 offers. The electric motor and transmission featured here is actually more compact than in the PHEV, so takes up less space.