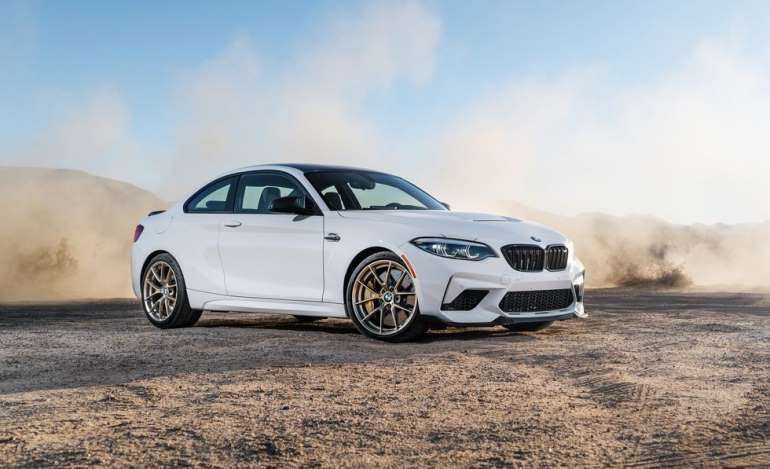 A pricey special-edition M2 with a 444-hp heart reminds us of the BMWs of the past.

Taglines work. Take, for example, the incredible motivational power of a "Hang in There" cat poster or the decades that BMW marketed itself as The Ultimate Driving Machine. In those days, BMW's cars regularly delivered class-leading handling and fun. In 2006, the German brand dropped the tagline and began a slow move away from cars that sing and dance. But the company still has a few, such as the M2 CS, that are hanging in there, clinging to the branches of the old family tree. 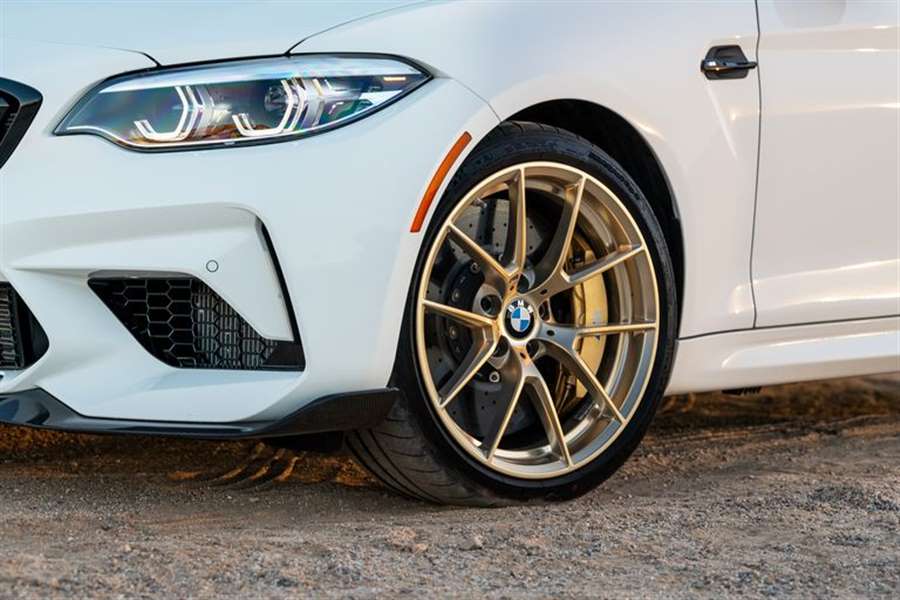 The M2 CS is a limited-edition, high-powered version of the M2, which is itself the hot version of the 2-series coupe. We're talking the rear-wheel-drive 2-series, not the front-drive-based, four-door 2-series Gran Coupe abomination that placed last in a recent comparison test and is best thought of as an ultimate disappointment. Thankfully, the M2 CS has nothing in common with that car. 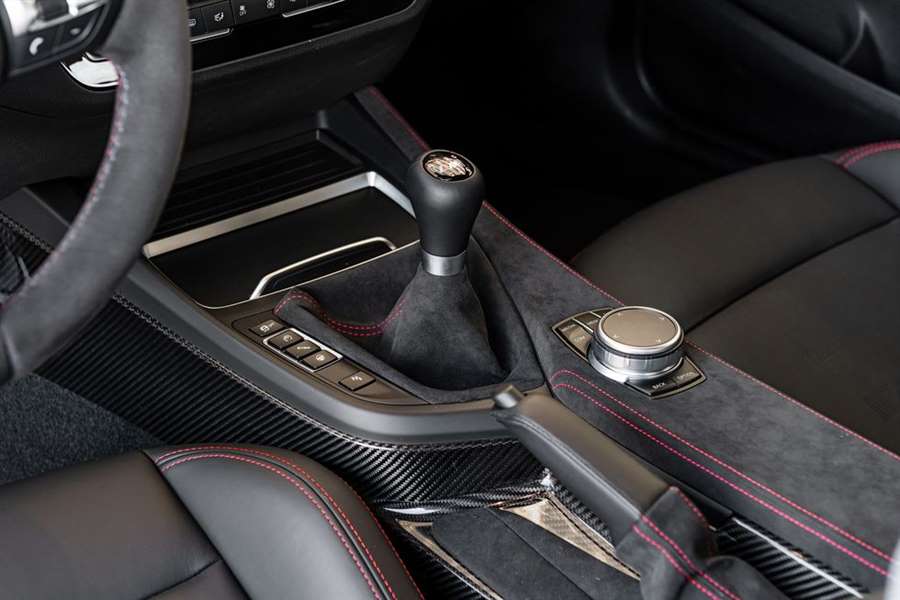 It does, however, share some parts with the outgoing Competition-spec M3 and M4, including the 444-hp version of the M division's twin-turbo 3.0-liter inline-six. Despite being a healthy 39 horses up on the M2 Competition, the CS isn't any quicker than its sibling to relatively low-speed thresholds. Basically, it is limited in the run to 60 mph by the traction of its rear tires. But the CS pushes ahead after hitting 60 mph in 3.9 seconds, and it passes through the quarter in 12.1 seconds at 120 mph, two-tenths of a second quicker and 4 mph faster than the stick-shift M2 Comp. 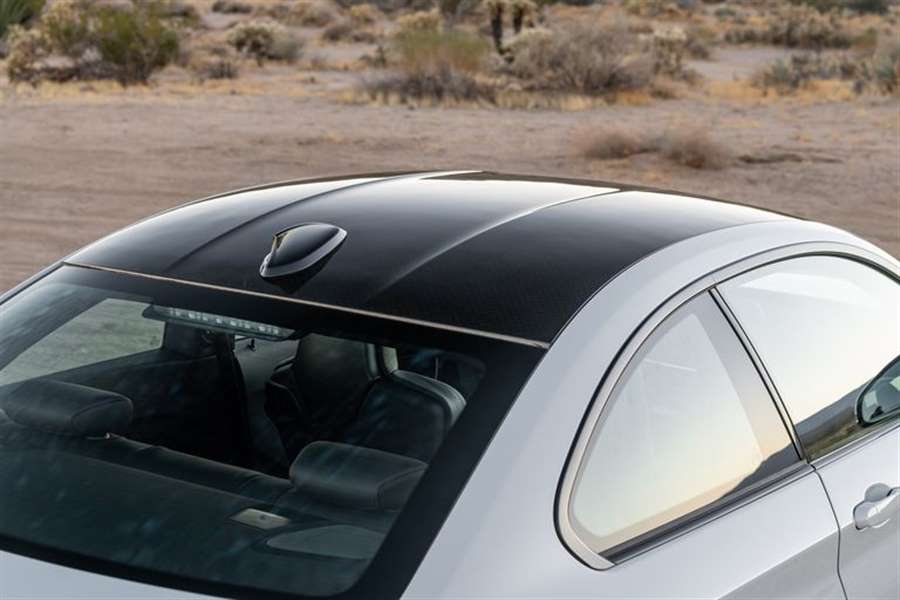 With its six-speed manual transmission, the CS pulls us in close. If you're lazy, it'll rev match on downshifts, and the shifter has the positive, if slightly rubbery, motion of BMWs past. Optional matte-gold wheels shod with Michelin Pilot Sport Cup 2 track rubber are part of the CS makeover. A test-equipment snafu cost us our skidpad measurement, but by the seat-of-pants measurement this car has more grip than the 1.00 g we measured in an M2 Competition riding on Michelin Pilot Super Sports. We promise.

Highs: An angry car designed to make us smile, manual-transmission joy, BMW's best stuff.
Those grippy Cup 2 tires probably deserve some credit for removing a lot of numbness from the M2's steering. While you can't quite read the Braille of the pavement through the Alcantara-wrapped wheel, the steering feedback is livelier than we've seen in recent BMWs. Adaptive dampers, similar to those found on the previous-generation M3 and M4, are available for the first time on the M2 and offer three modes. The Comfort setting works brilliantly on canyon roads (and probably even on racetracks), stiffening the damping as needed. Notching up to the harsher settings fails to improve handling and makes the ride punishingly firm. 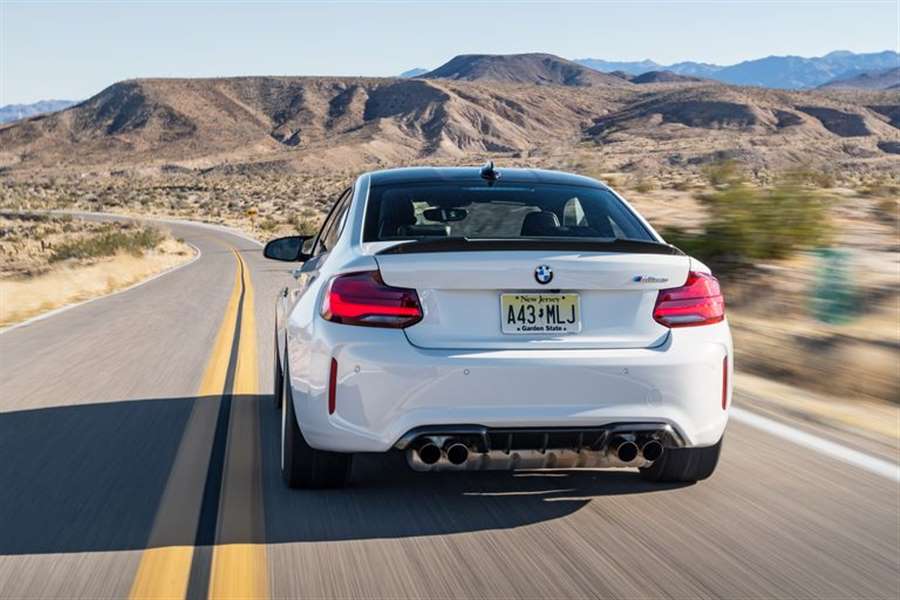 Carbon-ceramic brake rotors are an $8500 option and proved to be up to the abuse leveled at them during testing and on the road. In addition to fade resistance, an added benefit of the ceramic rotors is that they won't leave brake dust on the lovely gold wheels. Fearless prediction: When it comes to wheels, gold is the new black. The brake pedal is a little softer than we like when used casually, but work the brakes hard and there's nothing to complain about. Stopping from 70 mph took a short 145 feet, and hauling down from 100 mph required 301 feet.

An M2 CS on a mountain road is a happy place. There's a slight lag when you hit the accelerator on corner exit, as the turbochargers need a moment to spin up. To ensure sharp engine responses, old M cars were naturally aspirated and fitted with individual throttle bodies, but none of them made torque like modern turbocharged engines do. The CS produces 406 pound-feet of torque at a low 2350 rpm. 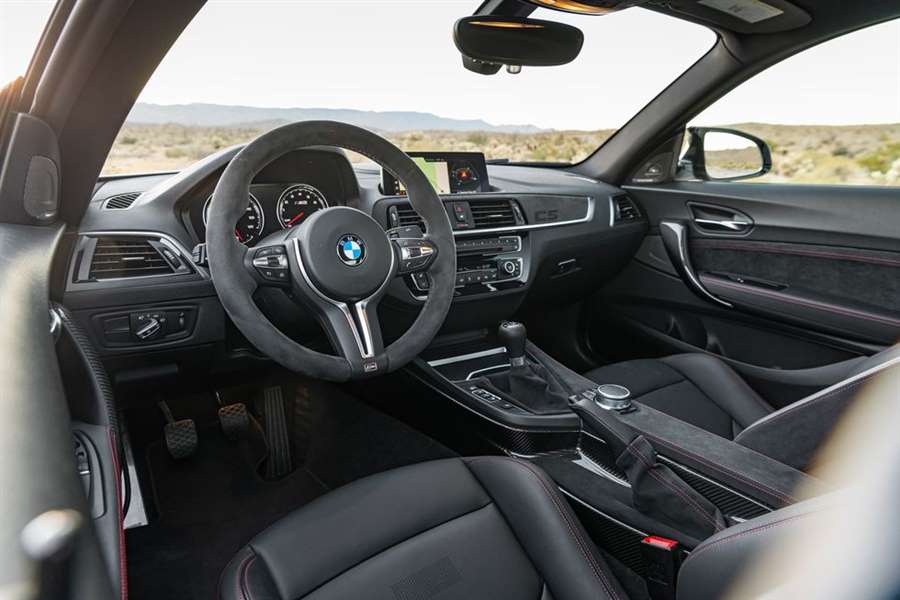 Lows: Some turbo lag, pushing six figures is pushing it.
Other parts shared with the old M3/M4 include the deeply bolstered front seats and the Alcantara-wrapped steering wheel. Rear-seat space is tight, and there are only two seatbelts back there, making this a four-seater. Carbon-fiber and more Alcantara trim dress up this aging interior, and much of the switchgear appears to be from BMWs of the past, but we're totally okay with that. The infotainment system features BMW's latest software, and Apple CarPlay is included.

A carbon-fiber hood and roof help the CS weigh 83 pounds less than the M2 Competition. Pushed to its lofty cornering limits, the CS acts even lighter and smaller than its 3489 pounds. Our main problem with this astonishingly good car is its $84,595 starting price. The letters CS cost more than SS 1LE, ZL1, ZL1 1LE, GT PPL2, and GT500. Those exotic Camaros and Mustangs offer more power and the same connected driving experience, but the M2 is smaller, lighter, and undeniably special in its own right. It's one of the last true BMWs. We just hope the engineers responsible have a particular cat poster in their offices.