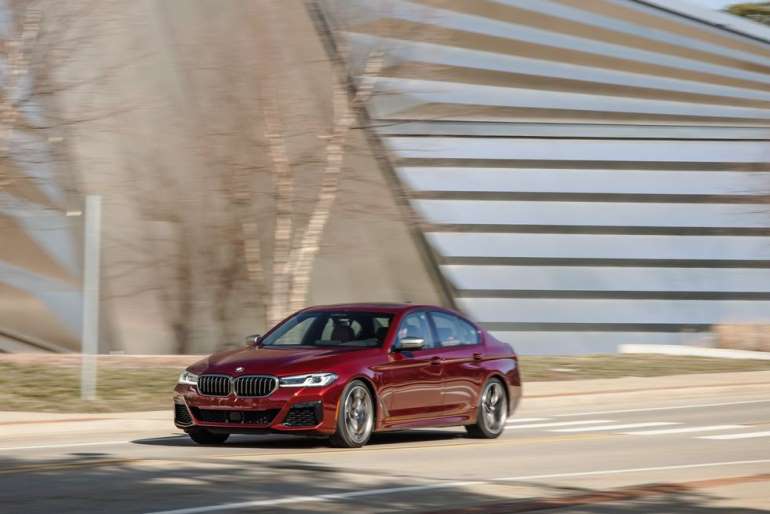 After disappointing acceleration numbers in our first test, we brought the M550i back for a retest to see if things improve.

When we last checked in with the BMW M550i we were a bit puzzled by its slower-than-anticipated acceleration numbers. BMW claims a zero-to-60-mph time of 3.6 seconds yet our test car needed 4.1 seconds to hit that mark. Heavier BMWs with identical 523-hp twin-turbo 4.4-liter V-8s, such as the X5 M50i, have bolted to 60 in 3.9 seconds, and our 5742-pound long-term BMW X7 M50i raced to 60 mph in 4.1 seconds. So, we called BMW's press office and asked to retest the M550i. There are plenty of things that can go wrong during testing. Possibly the V-8 or transmission had an issue or maybe the tank was filled with a bad batch of fuel. Whatever the reason, we got a different but identically spec’d M550i back for a retest. 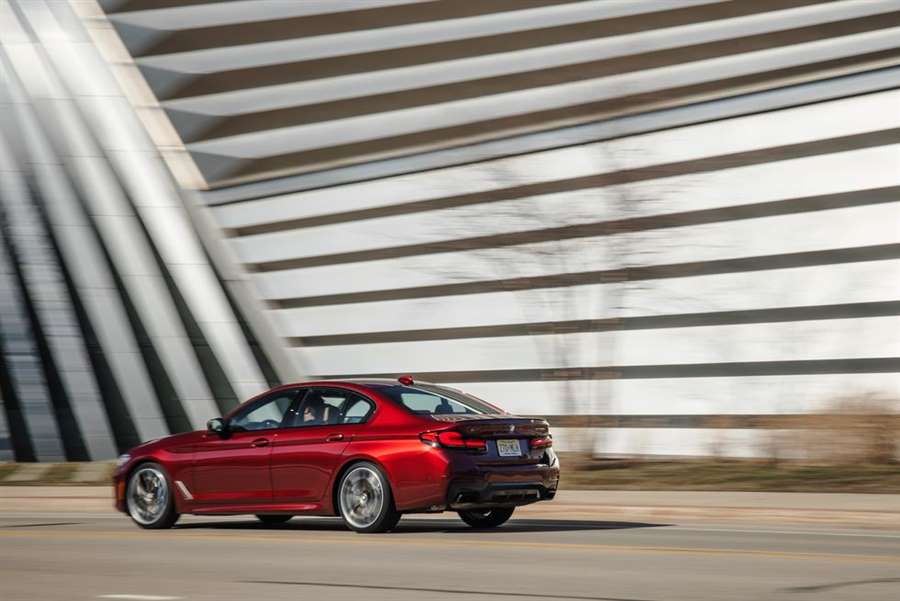 The results of round two were quicker, but still slower than what BMW claims. Test two resulted in a 3.9-second time to 60 mph and a 12.1-second quarter at 120 mph. Those figures are 0.2-second quicker than before. The unchanged quarter-mile trap speed, a reliable indicator of a vehicle's power-to-weight ratio, indicates the engine in round two was making the same amount of power as in round one. 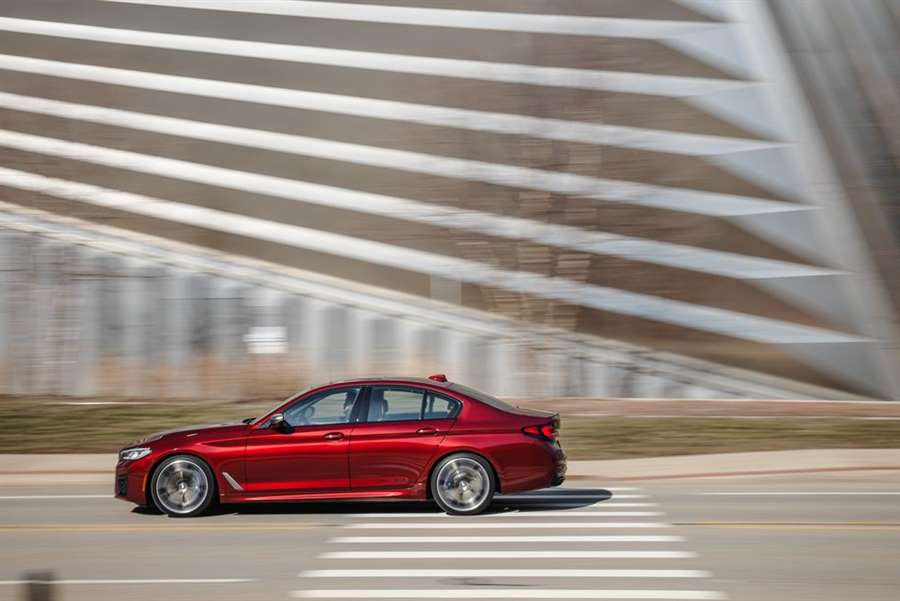 Set a mere rung below the M5, the M550i wears a body kit that makes it look nearly as aggressive as the M5, but crammed into the 5-series's engine bay is the detuned version of the BMW's 4.4-liter V-8. An eight-speed automatic is the only transmission, and it works brilliantly, delivering crisp shifts that largely go unnoticed and responding quickly to accelerator inputs. The engine has big lazy power and 553 pound-feet of torque to push you into the 20-way leather seats.

Under keep-the-gas-pedal-pinned acceleration, the M550i is considerably slower than an M5; we clocked the Competition model at 2.6 seconds to 60 and 10.7 seconds through the quarter-mile. But the M550i also is slightly quieter than an M5. The M550i's version of the engine redlines at 6500 rpm to the M5's 7200 rpm, so at full whack the M5 is a touch louder—81 dBa versus 79 dBa. There's a major difference when idling; an M5 registers 50 dBa to the M550i's 40-dBa whisper. The quieter demeanor matches the deluxe interior accommodations. When dressed with a full-leather dashboard ($700) and Cognac Dakota leather seats with the $3400 Bowers & Wilkins audio system playing Mozart's “The Marriage of Figaro,” the M550i xDrive does a convincing Rolls-Royce impression. 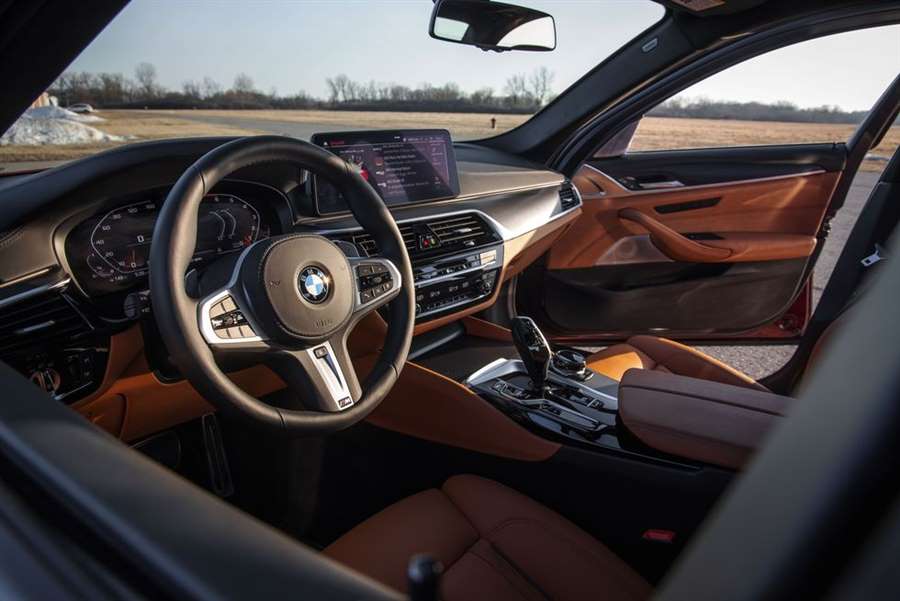 LOWS: Handling quirks, numb steering, not as quick as expected.
On the outside, there's no mistaking the M550i for a Roller. In Aventurin Red Metallic ($1950) and fitted with the M Performance appearance package you're basically looking at an M5 stunt double. Our test car came with optional 20-inch wheels with non-run-flat Bridgestone Potenza S007 summer tires. Those short little sidewalls don't look like they offer any cushioning, but fitted with the optional Adaptive M Suspension Pro you get a supple ride that avoids the crash of more overt performance models and the active anti-roll system keeps the 4480-pound sedan cornering as flat as a flapjack. On the skidpad, the Bridgestones held on with 0.95 g's of grip and stops from 70 mph took an easy and short 149 feet. 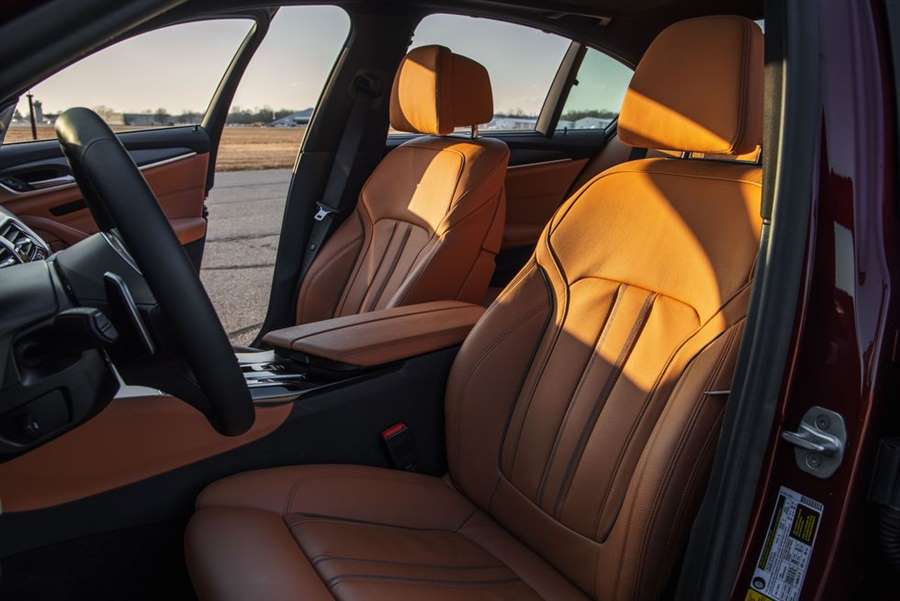 Actually using the chassis's potential in the canyons above Los Angeles left us a bit exhausted. Four-wheel steering is standard, as is Integral Active steering, and on top of that our test car came fitted with the $3600 Dynamic Handling Package that bundles the adaptive dampers and active anti-roll bars. BMW no longer fits a gearbox into the steering system to change ratios. Such as many other automakers, the ratio change—faster or slower—is done by altering the spacing of the teeth on the rack. BMW tunes the rear steer to increase agility or stability depending on the situation, but from behind the wheel the M550i's rear wheels seem to get into the act to disrupt your intended line through the corner. Dancing has a leader and a follower—the driver should lead, and the car should follow. The M550i keeps challenging the driver's prompts with unwanted yips and moves. 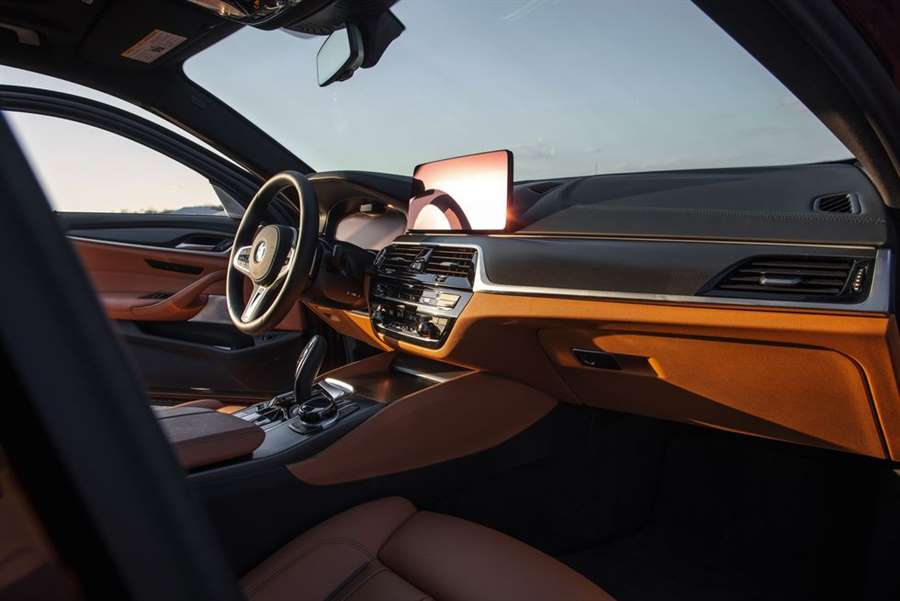 Path accuracy describes how well a car turns in and holds on to driver's intended path. We're guessing that the rear steer is tuned to give a lively feel, but when loaded up into a corner it revectors the car and you find yourself making adjustments to the numb steering to stay on the desired line. That bit of second-guessing that the chassis seems to do and the work you find yourself doing to counteract it is annoying and keeps you from trusting the car enough to push it hard in corners.

BMW doesn't fit the M5 with rear steer and it doesn't suffer from that sort of nervous second-guessing. We've previously experienced this handling quirk in a rear-steer equipped 540i and it remains here in the M550i, so we're guessing it's in how the system is tuned. 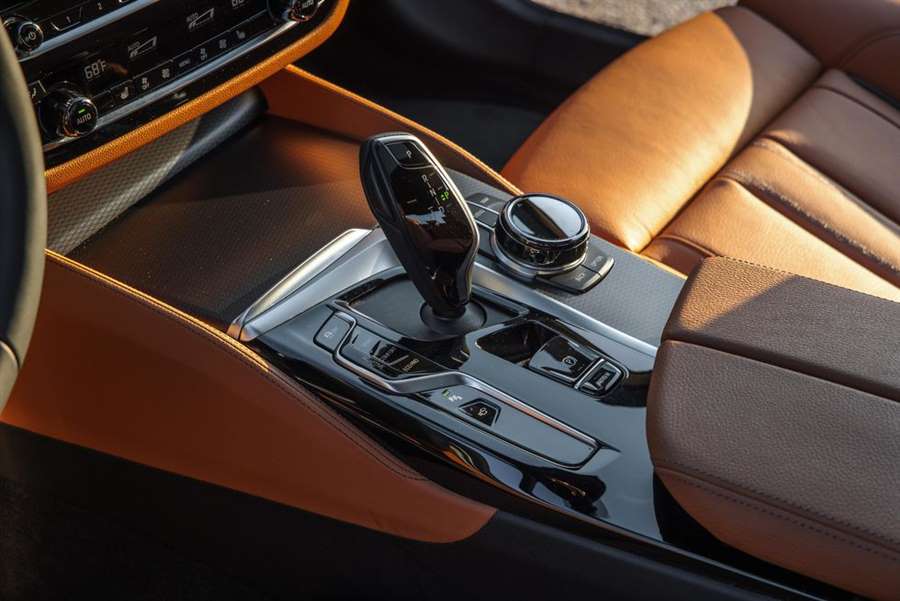 An M5 costs $25,000 more than the M550i's $77,795 base price, and that gap is why the 523-hp sedan exists. Loaded up, our tester came in at $93,735, but even if you try to go a la carte with the extras, all M550i models come with rear-steer and the chef doesn't offer substitutions. If you're thinking sports sedan, the M550i's handling might be a turn-off, but if you want to relax in leather-lined comfort while occasionally dusting off a Porsche driver at a stoplight drag race, you'll find the M550i pretty tasty.

Tagged under
More in this category: « BMW i4 Gran Coupe Preview The BMW X8 is coming: giant flagship SUV aims for sleeker look »