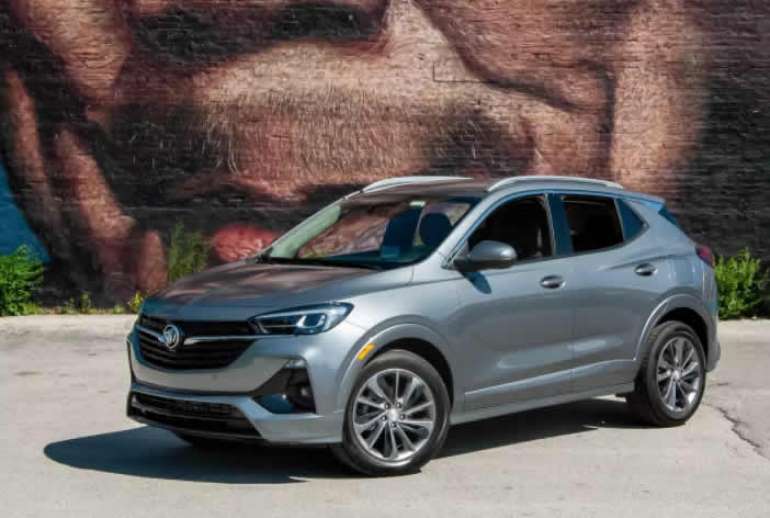 The verdict: The new 2020 Buick Encore GX is a small, premium-priced SUV that feels neither premium nor exciting, with bland materials and a meek powertrain. It gets the job done, though — assuming “the job” is mostly “being a little bigger than an Encore” (which remains in Buick’s lineup).

Versus the competition: Buick’s entry in the seemingly never-ending stream of small SUVs is outshined by others in the class that offer nicer interiors or far better driving experiences — or sometimes both — for thousands of dollars less.

The Encore GX is Buick’s latest and second-smallest SUV, bigger only than the Encore, which was one of the first subcompact SUVs on the market and the brand’s bestseller. The Encore is smaller than both the Envision and Enclave and offers buyers a choice of front- or all-wheel drive and two turbocharged three-cylinder engines. The Encore GX with FWD has a continuously variable automatic transmission, while AWD versions get a more traditional nine-speed automatic. Trim levels, in ascending order, are Preferred, Select and Essence. 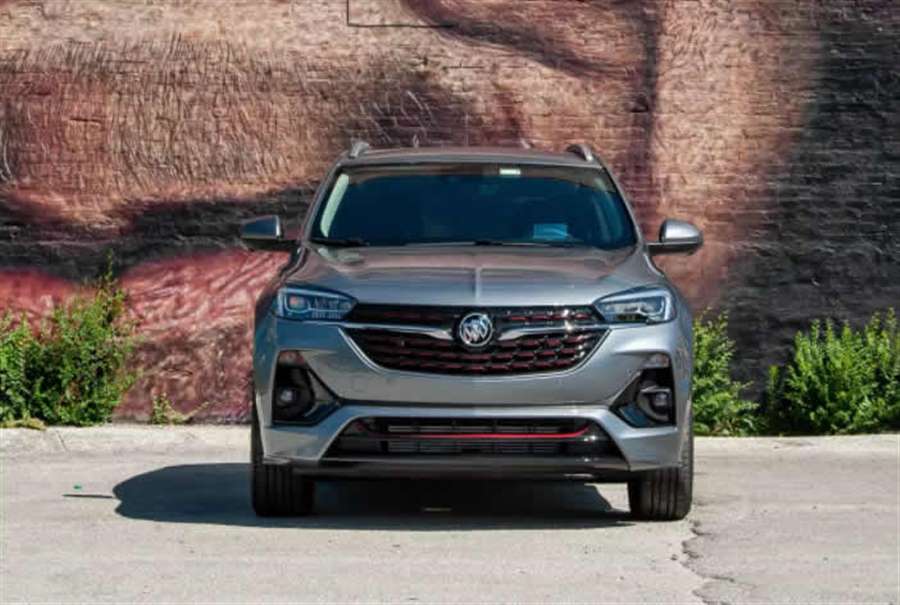 My test vehicle was a FWD Encore GX in the top Essence trim. It had the optional turbo 1.3-liter engine and Buick’s Sport Touring, Convenience and Advanced Technology packages. The Sport Touring package ($650) adds a dash of spice, with body-colored side molding, “sport” front and rear bumpers, a unique grille with red accents and package-specific 18-inch wheels (different from the 18s every Encore GX gets standard). The advanced technology in the Advanced Technology Package ($1,790) includes a 360-degree camera system, a head-up display and built-in navigation. The Convenience Package ($770) adds automatic parking assist, a rearview camera mirror and rain-sensing windshield wipers. Our test vehicle’s total price, including a $995 destination fee, was $34,115.

That’s a fair amount of money for a small SUV that, at its best, evoked feelings of “This car sure is … adequate.” The Encore GX competes against other small SUVs like the Mazda CX-30, our recent SUV-comparison-test-winning Kia Seltos, and a vehicle with which it shares its platform, the Chevrolet Trailblazer. 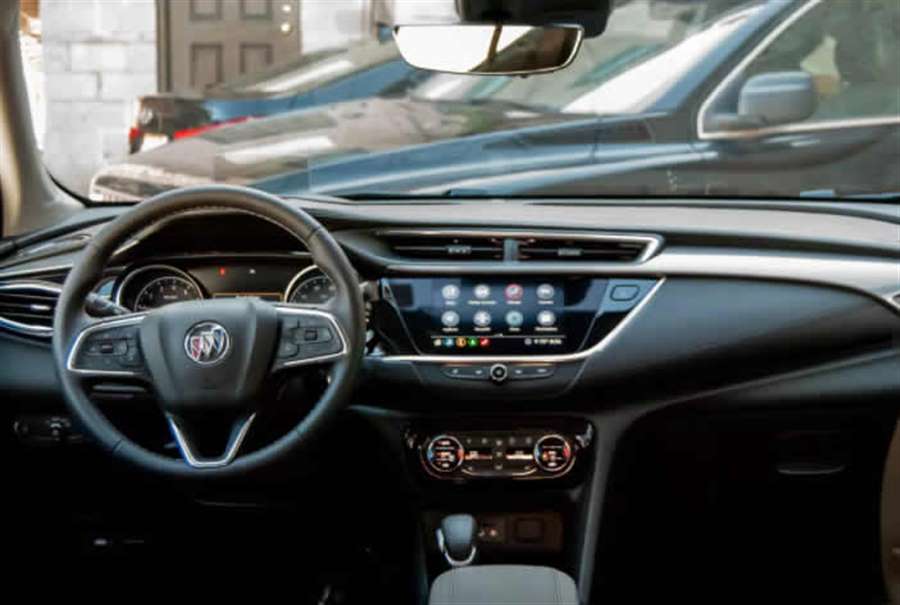 Even with its more powerful optional engine, the Encore GX still has only 155 horsepower, which isn’t many ponies to call upon when the accelerator is pressed. It’s never going to be a quick car, but that’s almost certainly fine for those considering buying one. It’s quiet on the highway and remains fairly composed at higher speeds despite its small size. Passing maneuvers are a bit of a stretch, but once the Encore GX wakes up from its highway hypnosis, it does what you want.

Around town, particularly in the model I drove, with front-wheel drive and a continuously variable transmission, you really need to stand on the gas to keep up with aggressive city traffic. This caused one of my least favorite behaviors in the GX: torque steer. There was so much torque steer — a phenomenon in which engine power applied to the front wheels causes them to pull to one side or the other. The wheel would practically jump out of my hands trying to turn to one side under strong acceleration, which would be more forgivable if the Encore GX were impressively quick or at all fun to drive. As it is, it’s just aggravating; I’d recommend choosing an AWD model for this reason alone. There also aren’t any available driving modes to increase throttle or transmission response or to tighten up the suspension or steering.

Steering itself feels numb and vague; it doesn’t communicate where the nose and wheels are pointed at any given moment. There’s so much play in the steering wheel before it actually turns the wheels, it reminded me of an early-2000s Mercury Grand Marquis — or the time I was 12 and got to steer a DUKW during a Boston Duck Tour in the Charles River. 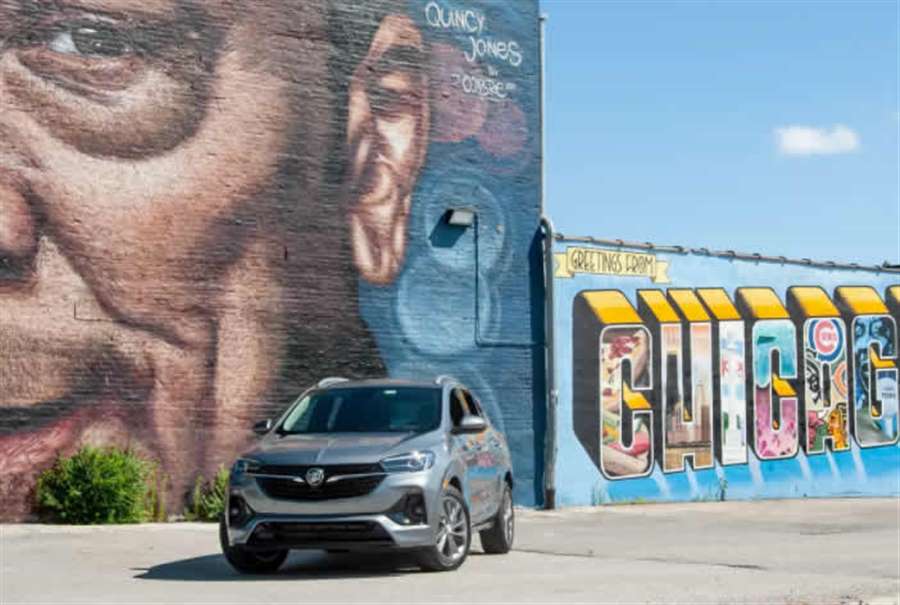 Choppy pavement — of which there’s plenty around Chicago — unsettles the Encore GX more than other small SUVs I’ve driven over the same roads. There was also more body roll in turns than I expected. The SUV feels like a much bigger vehicle when you’re driving it until a modern RAV4 pulls up alongside and dwarfs you, which may appeal to buyers looking for a big car feel without an actual big car.

One much-appreciated feature on the Encore GX was the ability to deactivate the engine’s automatic stop-start feature. GM had not previously allowed owners to turn the feature off, and while reducing engine idling is good for the environment, being stuck in a traffic jam on a sweltering summer day with an engine that refuses to run while stopped — significantly reducing the air conditioning’s effectiveness — has made me yearn for at least the option to deactivate. It seems GM finally trusts its owners in this regard.

Despite the Encore GX’s high price, its interior doesn’t have a premium or even fun feel. The monotone interior you see above has the materials quality you’d expect in an SUV priced a few thousand dollars less. Truly, the only premium or near-premium interior in this class belongs to the Mazda CX-30, but at least other contenders in the segment don’t position themselves as upmarket choices the way Buick does.

That said, the Encore GX’s features do have more of a premium feel. It has an available head-up display, rearview camera mirror, 360-degree camera system and available self-parking feature. But those features aren’t tangible and aren’t always in use, whereas Encore GX drivers are always sitting on low-quality leather (in the Essence) or touching parts of the interior that could use more padding. Even the head-up display is an old-school flip-up version that sounded like a cassette tape being ejected whenever it rose into position or folded down when the car was turned off. The HUD is at least visible when wearing polarized sunglasses, so kudos to Buick for that.

Buick’s standard 8-inch touchscreen infotainment system is adequate, with standard Apple CarPlay and Android Auto (2021 models also get standard wireless compatibility). It has modern enough graphics and a straightforward user interface. For all the ways the CX-30 tops the Buick in premium feel, Buick has Mazda beaten here.

Visibility is fine, with no major blind spots, and the optional 360-degree camera system helps out in tight spots. I was comfortable in the backseat, with decent headroom and legroom. Buick estimates cargo volume at 23.5 cubic feet with the backseat upright and 50.2 cubic feet with it folded down. The smaller Encore has 18.8 and 48.4 cubic feet, respectively. A trip with four adults — or even two parents and two kids — might be pushing it, but two adults plus pets will be fine. Based on manufacturer specifications, the CX-30 has less cargo volume, while the Seltos and Trailblazer have more.

Standard safety features on the Encore GX include forward collision warning with automatic emergency braking and pedestrian detection, lane departure warning, lane keep assist and automatic high beams. That’s a big deal for a GM product; traditionally, some or all of these features have been higher-cost options. Some features are still optional, including adaptive cruise control, blind spot warning with rear cross-traffic alert, a 360-degree camera system, a head-up display, a rearview camera mirror and an automatic parking feature.

The 360-degree camera system was very useful and I’ve already praised the head-up display’s visibility with polarized sunglasses, but the Buick’s other features felt more nice-to-have than necessary. I’ve never been a huge fan of rearview-mirror camera displays, as they always disorient me a little by providing a slightly different view than what my eyes expect. And automatic parking assist would be more useful if the Encore GX weren’t already so small and easy to park. I’ve used similar features on larger vehicles to help determine if an unfamiliar car would fit in a particular spot, but the answer to that question in the Encore GX is almost always “yes.”

The Insurance Institute for Highway Safety hasn’t yet crash-tested the Encore GX. In this regard, it should not be mistaken for the other Encore, which has an entirely different platform and, thus, different crash characteristics. Once the Encore GX is tested, the results will appear here, with other small SUVs. The National Highway Traffic Safety Administration gave the Encore GX a four-star overall safety rating, out of a possible five stars. In our Car Seat Check of the Encore GX, the small SUV earned mixed scores

Is the Encore GX a Smart Buy?
It’s hard to say if the Encore GX is a smart buy. On the one hand, with sticker prices at the top of the line approaching — or even exceeding — $35,000, the model is hard to recommend. But will buyers ever need to pay even close to sticker price?

I prefer the Chevrolet Trailblazer to the Encore GX both in terms of interior quality and driving experience, and the Mazda CX-30 far surpasses the Encore GX in everything but infotainment systems. If, however, you care about buying a car from a domestic brand that’s ostensibly nicer than Chevrolet — even if the car itself is assembled in South Korea — and if you can get a decent deal on an Encore GX, it will likely meet your needs.