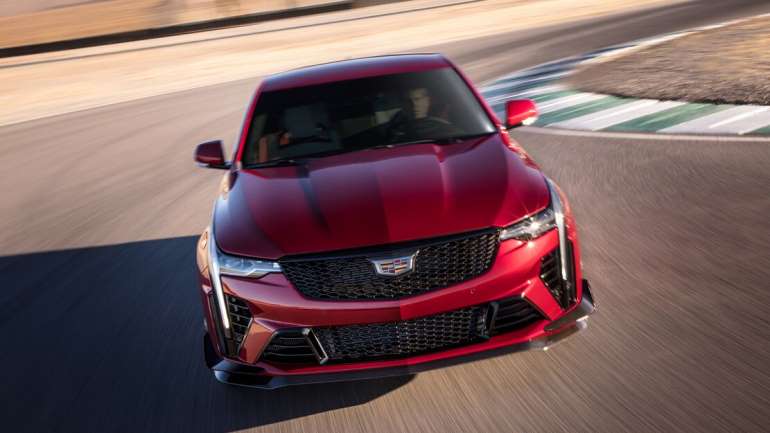 ATS-V who? Cadillac finesses its finesse machine to a transcendental level.

Imagine telling someone when the 2016 Cadillac ATS-V was new what the world would look like in 2021, when the 2022 Cadillac CT4-V Blackwing arrives. Would they believe many major automotive brands plan to sunset their gasoline-powered offerings in about another decade? Or that manual transmissions in performance sedans are nearing total extinction—including in the ultimate version of the BMW M3, the Competition model? How about that BMW has also abandoned its traditionally understated German exteriors for a brash, porcine front clip? And of course, the reality that the CT4-V Blackwing and its CT5-V Blackwing counterpart will be the final gas-powered V-Series cars from Cadillac?

What if you told them, amid all this change, it's Cadillac, of all brands, that takes the bold position of offering a manual gearbox in both models? Inconceivable, they might say. But they would probably believe Cadillac would throw all its considerable performance and chassis know-how at sending the V-Series off with a bang. The CT4-V Blackwing is that explosion.

What Is The Cadillac CT-4 Blackwing?

A gentle evolution (and more thorough restyling) of the ATS-V might not seem like an appropriately dramatic send-off at first. There is a lot of carryover hardware between the two vehicles, from the Alpha 2 chassis architecture to the LF4 twin-turbo V-6. But the transformation carries more subjective weight than the CT4-V Blackwing's spec sheet suggests.

The ATS-V's smooth angularity is replaced by a more modern exterior influenced by Cadillac's Escala concept. The new look is at its best where the designers signal musculature: the way the knife-edged character lines above the door tumble into the vertical elements in the taillights and front DRLs, and in the creases that form a subtle power bulge in the hood. But the 2022 Cadillac CT4-V Blackwing's distended trunk overshadows the neat taillamps, and its shape is mirrored in the decklid spoiler for added emphasis.

The tacked-on front dive planes, part of the optional Carbon Fiber 1 package ($4,350), look like a late addition because they were. The CT4-V Blackwing wouldn't hit its front downforce target without them. At least the aero bits are functional; the CT4-V Blackwing makes 169 pounds of downforce at 180 mph, the most of any V-Series car. Call this car distinctive and purposeful, sure, but its bodywork is too busy to be beautiful.

The hedged appreciation extends to the soundscape. Despite the ATS-V's dynamic excellence, it never had the aural drama to fully sell its sporting persona. You can now consider that issue fixed, at least as much as it can be with a V-6 still under the hood. (Cadillac really couldn't dig deep and send it off with a naturally aspirated V-8? Guess not.) At least Cadillac's engineers reworked the exhaust to hit maximum allowable sound targets in full rip. The resulting noise, while still a bit coarse, makes the Blackwing's engine seem like a living, breathing, even agitated thing rather than a distant clatter and whoosh. Most important, it keys your ears to the engine's state of froth even on a noisy track with open windows. It's absolutely better than the ATS-V.

There's also a negligible increase in power (eight additional ponies thanks to a tune and revisions to the intake) while torque is unchanged, ringing in at 472 horsepower and 445 lb-ft of torque. Cadillac claims its 2022 CT4-V Blackwing can scoot to 60 mph in 3.9 seconds with the optional 10-speed automatic or 4.1 seconds with the manual. We clocked the old ATS-V sedan at 3.7 seconds to 60 mph with an eight-speed automatic. It's possible the newer automatic could shave some time off its predecessor's 60-mph dash in our testing, though Cadillac says the CT4-V Blackwing weighs roughly 112 pounds more than that car. Otherwise, the LF4 engine is unchanged besides some lightly revised oil squirters, and that's all right, because this twin-turbo V-6 is a torque-rich, low-lag means to an end.

The 2022 Cadillac CT4-V Blackwing is fundamentally a finesse machine, pointy and agile without being unforgiving. Credit goes to some choice pieces bolted to its ultra-stiff chassis. For one, the CT4-V Blackwing wears 18-inch wheels all around (even the optional Tech Bronze snowflake upgrade wheels, which look phenomenal), as well as bespoke-compound Michelin Pilot Sport 4S tires. Damping those wheels is the fourth generation of MagneRide shock technology, controlled by a revamped suite of sensors and with increased capability: They react quicker than before, with more precision and less body roll in corner transition.

All this technology yields dividends on the road. Even with the shocks firmed up, harder impacts are muted substantially, letting information about what's underneath the car come through without upsetting the car's composure. But on track, at Virginia International Raceway, the combination of the smart damper tech and the ample sidewalls of the sticky Michelins means thwacking the circuit's aggressive curbing is a non-event.

Brake bite is ferocious, even though these are just iron units upsized slightly from the ATS-V. Front discs are nearly 15 inches gripped by six-piston Brembo calipers, and the rears are 13.4 inches with four-piston units. The brakes feature a new copper-free pad compound that won't harm aquatic life when their dust gets into waterways, which Cadillac engineers say took a lot of work to nail. Nail, they did; this pad compound has great feel—and, Cadillac says, the same longevity as a copper-laden equivalent.

Like any modern GM performance product, there's a lot of computing power on board. A new electronic limited-slip differential, housed in a new aluminum case that saves a significant 22 pounds, is controlled by the excellent and highly incremental Performance Traction Management system. With driver aids either fully on or off, they wouldn't work as well without a nimble car underneath. The 2022 Cadillac CT4-V Blackwing is eager to turn into corners, happy to rotate predictably with the throttle, and enthusiastic about another lap. Cadillac (and GM in general) is absolutely on top of its steering feel game, too, and the CT4-V Blackwing combines fantastic precision, good weighting, and clear and unequivocal feedback in a microsuede-wrapped helm.

The ATS-V's manual transmission was a little too notchy to be truly enjoyable, and it was slower around a track than the automatic. The 2022 Cadillac CT4-V Blackwing's standard manual complicates the picture a bit, because even though it's technically slower, the Tremec-sourced manual is absolutely lovely to use. Short and precise, each shift provides the ideal amount of positive engagement without heavy drag as you slot into the gate. Plus, manual CT4-V Blackwings now feature no-lift shifting, which works as advertised to knock an iota of time off each shift.

There's no knock against the 10-speed automatic, which is competent and economical on the road and whip-crack sharp on the track. It's smart enough to leave alone on the circuit; it will find the right ratio for the job as you focus on getting your lines correct. Cracking off the gear changes manually with the shift paddles is fast but not as satisfying as a true dual-clutch setup. There may be some subjective trade-offs between the two, but even manual transmission snobs should admit you can't go wrong with either gearbox.

The Cost Of Fun

The 2022 Cadillac CT4-V Blackwing is priced competitively. Remember, Cadillac's unusual pricing strategy means this Blackwing is larger and more powerful than other cars in its price bracket. That's great for consumers but maybe less great for Cadillac's perceived prestige. After all, this is a vehicle that out-torques the non-Competition-model BMW M3 by a not-insignificant amount, yet it rings up at $59,990 if you're stingy with the options and pick a boring color. That's for the manual, too, by the way. If you're into downforce and/or carbon fiber, prepare to shell out $4,350 for the Carbon Fiber 1 package with all the downforce goodies, and an additional $2,650 to get the side skirts and rear diffuser insert made from the woven stuff. That all brings the price to $66,990.

Yet even at that number, the interior design and materials are barely on par with expectations. The CT4 comes closer, in general, than before, but it still doesn't feel as special inside as its rivals both above and below its price point. There are elements of greatness, like the optional highly bolstered bucket seats, which hug without hurting and are all-day comfortable. The optional Performance Data Recorder is also a strong value if track use is a possibility, and it works with Cosworth Toolbox, an advanced performance data analysis app. But interior quality isn't why you should buy a CT4-V Blackwing. No, it's how it romps around a track or down a squiggly back road. And how it makes you feel while doing it (hint: great).

The 2022 Cadillac CT4-V Blackwing packs so much entertainment value for the asking price, so much subjective enjoyment from its major controls, so many chassis learnings from Cadillac's nearly 20-year-old V-Series program into one subcompact package that it's hard to argue with the result. As a last hurrah for Cadillac's fossil-fuel-huffing tire-smokers, this one nails the brief.