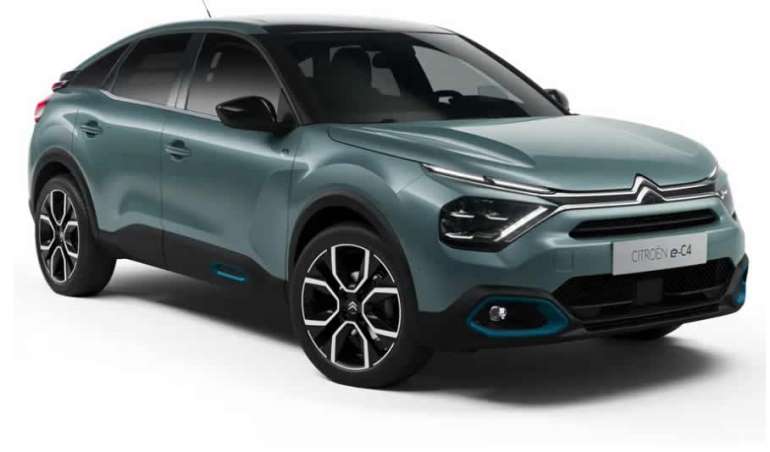 The all-electric Citroen e-C4 is being launched alongside the petrol- and diesel-powered C4 hatchback, and is part of its maker's strategy to launch its new cars simultaneously with internal combustion engines and EV drivetrains. The first thing you'll notice is that aside from a few detail trim differences, the two cars look identical – ideal for those looking to move to electric without shouting about it.

This is a tactic that Citroen's sister companies, Peugeot and Vauxhall, are employing with the e-208, e-2008, Corsa-e and Mokka-e – which is no surprise as these cars extensively share under-the-skin technology. Citroen will be unique for now in offering its mid-sized family hatchback in petrol, diesel and electric forms from launch.

The e-C4 doesn't actually have many direct rivals, with the Nissan Leaf, Volkswagen ID.3 being the only electric family hatchbacks for now. But if you extend your horizons to small SUVs, you could include the Peugeot e-2008 and even the MG ZS EV, which major on style and comfort or value respectively.

The styling of the Citroen e-C4 is definitely a talking point. It's a sleek fastback design with lots of Citroen's current design cues. It gets the interesting split-level lighting arrangement up front first seen on the C3, side cladding and wheelarch extensions that echo the company's SUVs, and a high-level rear spoiler, which gives it a dramatic profile.

Citroen says it's highly aerodynamic, which should mean low wind noise at speed and maximum battery efficiency on the motorway. It will be interesting to see whether buyers see it as a sleek SUV with a sloping roof or a chunky hatchback. Customers have the option of choosing up to 31 combinations of body colours and colour packs.

Inside, it gets a development of C5 Aircross's all-digital dash and infotainment set-up – which means extensive use of the touchscreen for many of the car's functions. The screen is big, and sits proud of the dashboard to become a styling feature in its own right.

There appears to be plenty of space in the centre console, easily-accessible USB sockets and storage bins between the seats, too. Citroen also points out a range of accessories and options that includes a wireless phone charger, head-up display and tablet stands for the front passenger.

Comfort should benefit from the latest version of Citroen's Advanced Comfort seats. They're wide and padded with high-density foam with a thick 15mm layer of textured foam on the surface. If they're similar to those in the C5 Aircross, then the C4 will be very comfortable on a longer run.

It has a 380-litre boot area with the seats up, which rivals that of the latest Volkswagen Golf, with a two-level boot floor. That split boot floor means that with the panel in its uppermost position, there is no lip to get your heavy objects over. 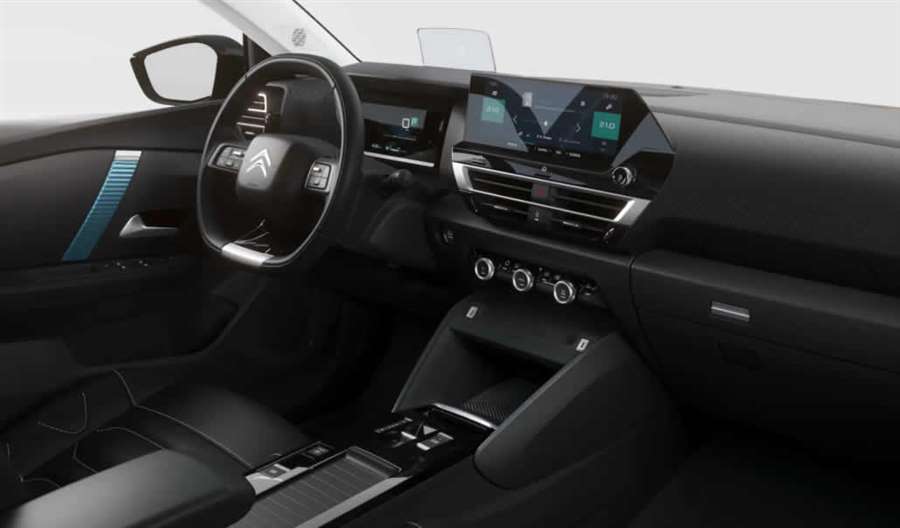 Citroen’s e-C4 features a 136hp electric motor and 50kWh battery. It has an official WLTP range of 217 miles and supports up to 100kW rapid charging, allowing 80% of the battery to be charged in 30 minutes. Citroen says the e-C4 is capable of 0-62mph in 9.7 seconds and has a top speed of 93mph.

For regular home charging a Type 2 charging cable is included as standard, allowing a regular 7.4kW charger to reach a 100% charge in seven hours and 30 minutes. From launch, all customers will be offered a Pod Point Solo Smart Charger for free. When plugged in at home on a wallbox, it will fully charge in around 7.5 hours. The e-C4 joins the C5 Aircross Hybrid, Ami, e-Berlingo and e-SpaceTourer in its electrified line-up.

What versions are available?

The e-C4 comes in three flavours, all powered by the same 136hp electric motor. The entry-level Sense model gets LED headlights, a 10.0-inch touchscreen for the infortainment system with Apple CarPlay and Android Auto as standard. it also comes with a impressive suite of safety it including Automomous Emergency Braking (AEB), Lane Keeping Assist and Driver Attention Alert. You can move up to the Sense Plus, which adds Citroen Connect Nav, a tablet computer holder for front seat passengers, LED interior lighting, and a rear parking camera. 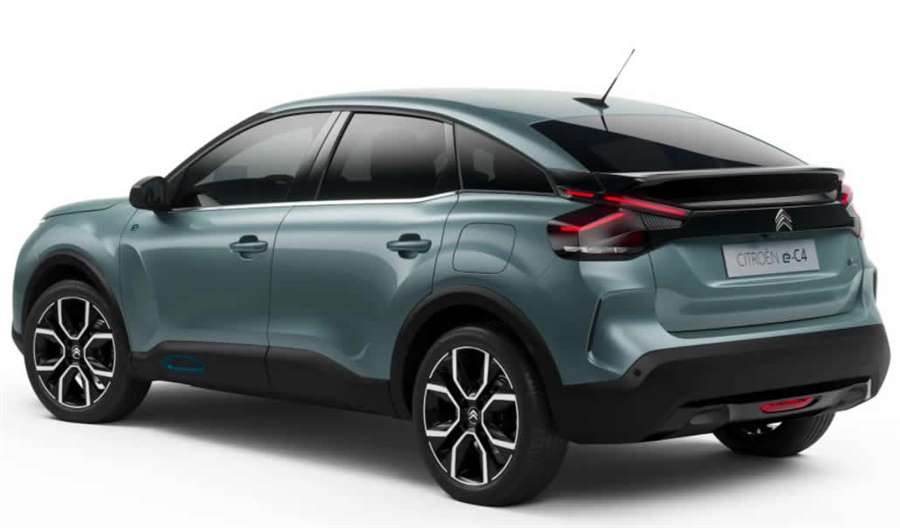 The range-topping Shine model gets dark tinted rear windows, Citroen's Safety Pack Plus (with adaptive cruise control), keyless entry and start, and automatic high beam headlights. A Shine Plus trim adds a premium hi-fi system featuring uprated speakers and the addition of a subwoofer, all as standard.

The e-C4 is available to order now with deliveries to UK customers commencing in February 2021.

Should you buy a Citroen e-C4?

We'll know more once we've driven it, but the early signs are encouraging. Since the Volkswagen e-Golf went off sale, there haven't been any options for those who want a small family car that's powred by electric and doesn't shout about it. Its main rival is the Nissan Leaf, which although ageing in several areas, does still offer a competitive range and efficiency and the excellent Volkswagen ID.3. And both of those are bespoke EVs, designed as such from the ground up.

Citroen hopes that the new e-C4 will appeal to a wider range of buyers as a more-rounded product that majors on comfort and refinement. It looks well priced and comes with an impressive amount of equipment, as well as a free home charger, which should help persuade buyers to take the plunge.

Tagged under
More in this category: Citroen e-C4 electric car (2020) review: is comfort and individuality enough? »