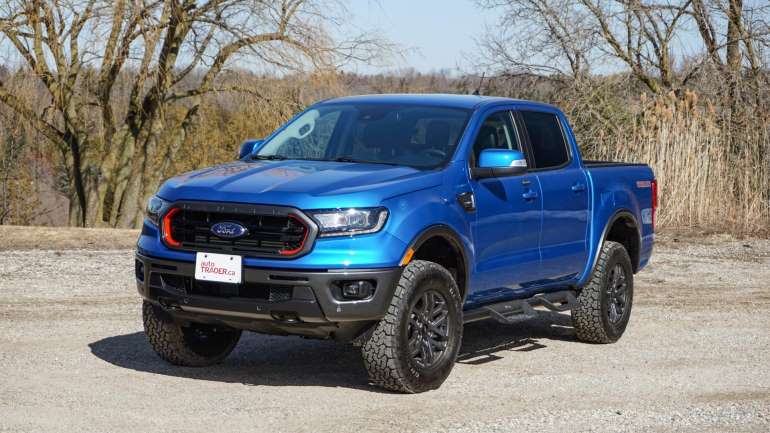 If you've been a Ford Ranger fan as long as us, you probably had the same emotional response we did when hearing that the Tremor model would be making a comeback. For better or worse Ford surprised us all when the 2021 Ranger Tremor arrived as a hardcore off-road package instead of the audiophile-geared truck it was in the early 2000s. With a small lift, impressive Fox 2.0 shocks, and 32-inch General Grabber all-terrain tires, the Ranger Tremor is the real deal when it comes to off-road capability—on paper anyway. This combination elevates Ford's Ranger to compete in the class of premium midsize off-roaders that previously included the Chevy Colorado ZR2 and Toyota Tacoma TRD Pro.

So, is the 2021 Ford Ranger Tremor the ultimate when it comes to factory off-road pickups? Read on to see just how our judges thought it fared during our weeklong torture test.

When Ford brought the Ranger back as a midsize in 2019 it did so following a trend that is becoming more and more common. Ford has offered this generation of Ranger with only a single drivetrain choice. It's really not a bad one, though, as the little truck's 2.3-liter EcoBoost I-4 engine pumps out 270 hp and an impressive 310 lb-ft of torque. Backing the EcoBoost engine is a 10-speed automatic transmission similar to what's found in the larger F-150 pickups.

Testing at the track is really the only place where our diverse group of competitors are compared head-to-head. While we don't expect the smaller midsize trucks to take down the more powerful half-tons, it is interesting to see where everything shakes out. When putting rubber to road, the Ranger Tremor ran from 0 to 60 mph in 7.61 seconds and completed the quarter-mile in 16.08 seconds at 88.0 mph. This was enough to be the quickest and fastest of the trio of midsize contenders, but what we found even more interesting was the fact that the Ranger Tremor was only a fraction of a second off of besting the far more powerful Tundra. Unfortunately, when it came to braking performance the Ranger fell to the back of the pack, reining things in from 60 mph to 0 in 152.22 feet, a full 10 feet further than the next closest competitor.

When it came time for the RTI ramp the Ranger Tremor held its own nicely with a solid mid-pack score. Climbing 51 inches up the ramp the Ranger scored a 440.53, which proved a better score than both the Nissan Frontier and Toyota Tundra but fell far behind the flexy Tacoma.

Ford made a decision, when relaunching the Ranger nameplate in 2019, to utilize the company's existing global platform. While this certainly saved the company development time and money, it's left the three-year-old Ranger feeling somewhat dated already, and this was reflected in our judges' scoring of the truck. There were many comments about the truck's hollow-sounding door closure, the interior's overall simplicity, large amount of hard plastic trim, and generally uninteresting design. Despite this, our judges were largely in agreement that the Ranger's front seats proved quite comfortable, and the B&O audio system sounded fantastic. While there was nothing specifically wrong with the Ranger's interior (although one judge disagreed with the location of the power mirror switch), it didn't win many fans and this was reflected in the scoring.

While the interior didn't garner the highest scores, the Ranger Tremor's exterior made fans out of the bulk of our judging crew. Setting the Tremor apart from other Ranger models is a slight increase in ride height, 32-inch General Grabber tires, metallic painted wheels, unique fender flares, a painted grille, rear recovery hooks, and hoop side steps. This combination gives the Ranger Tremor an aggressive style that our judges enjoyed. Specifically, the Ranger gained high marks for its stance, loads of ground clearance, aggressive all-terrain tires, and its four closed-loop recovery points. The only real complaint heard from the team focused on the Tremor-specific hoop side steps. Our judges found the steps to be largely unusable for entering or exiting the vehicle, several scraped their shins against the large hoops, and we spent the entire week of testing worried that we would damage them off-road since they hang well below the doorsill. We were all in agreement that if Ford were to ditch the large steps in favor of a more low-profile rocker guard the Tremor package would be perfect.

Ford Ranger Tremor On The Highway

When it came to pounding the pavement the Ford Ranger Tremor scored very average marks from our judges. They noted that the Ranger felt small and nimble, which was especially handy when navigating tight parking lots. Many of our judges gave high marks to the Ranger's corner-carving ability and tight overall handling characteristics. The truck was also noted to be very smooth, thanks in part to the Tremor package's Fox 2.0 monotube dampers. The truck's EcoBoost engine and 10-speed transmission were crowd favorites as well. While there was some slight grumbling about perceived turbo lag from the turbocharged 2.3-liter I-4 engine, everyone agreed that once on the boost the small truck would really hustle. The biggest complaint we found among the judges when it came to highway driving centered around cabin noise. With the stereo off many noticed increased levels of wind and road noise, with the aggressive General tires contributing as well. Thankfully, the B&O audio system easily drowned out these noises. Fuel economy calculated from the Ranger Tremor was quite interesting. The truck is rated at 19 mpg across the board by the EPA, but during the course of our testing we saw an average of 16.43 mpg with a worst tank of 14.93 and best of 22.38. What this tells us is the Ranger Tremor gets quite thirsty when driven hard off-road but can be quite miserly while cruising on the highway. We have no doubt that in normal driving this truck can match or beat its EPA ratings, which is really rather rare.

When The Pavement Ends

Ford's Ranger Tremor comes packed with off-road features, and these really appealed to our team of judges. Thanks in part to the truck's increased ride height and 32-inch General Grabber A/TX all-terrain tires, the Ranger Tremor boasts an impressive 9.8 inches of ground clearance along with a 30.9-degree approach, 24.2-degree breakover, and 25.5-degree departure angles. This gave the truck plenty of clearance to maneuver over and around obstacles on our rocky trails. The Tremor's suspension features Fox 2.0 dampers with reservoirs in the rear. Wheel travel has increased to 6.5 inches in the front and 8.5 inches in the rear. When combined with the truck's specially tuned front and rear springs and the Fox shocks the Ranger Tremor gives a fantastic ride over moderate-size bumps and rough terrain even at higher speeds.

The Ranger Tremor also comes fitted with a host of electronic goodies designed to help during off-road adventures. Most important among these is the electronic locking rear differential. Our judges were blown away by the fact that Ford allows Ranger drivers to engage the locking differential in all drive modes, including two-wheel drive. While the locker still disengages at a relatively low speed (about 20-mph), none of the other competitors allow rear locker use in two-wheel drive and most are low-range-only. In addition to the locking differential, the Ranger Tremor also comes with Ford's Terrain Management System, which includes four distinct drive modes. It doesn't stop there; the Ranger also features Ford's innovative Trail Control system which allows the truck to handle steering and braking while on the trail. Finally, Ford recalibrated the Tremor's traction control system for improved acceleration and traction on loose surfaces.

During the course of testing there wasn't a discipline that our judges didn't rate the Ranger Tremor highly on. The truck performed admirably on our rutted hill climbs, tackled bumpy desert roads with ease and comfort, and had no issues in the rocks (aside from the low-hanging side steps, that is.) The real surprise was in the sand where the Ranger Tremor impressed with its tight chassis, great suspension tuning, and fantastic power.

While the 2021 Ford Ranger Tremor might not be the newest kid on the block, it has proven to be a really solid all-around performer. If you can look past the dated interior design, the Ranger Tremor might be the perfect midsize truck for those looking to get deep into the backcountry in comfort and style. The truck's suspension, tires, and wheel package work very well together, while the drivetrain provides plenty of power and efficiency. We'd go as far as to say that the Tremor package might just be the best Ranger available today … just need to ditch those side steps.