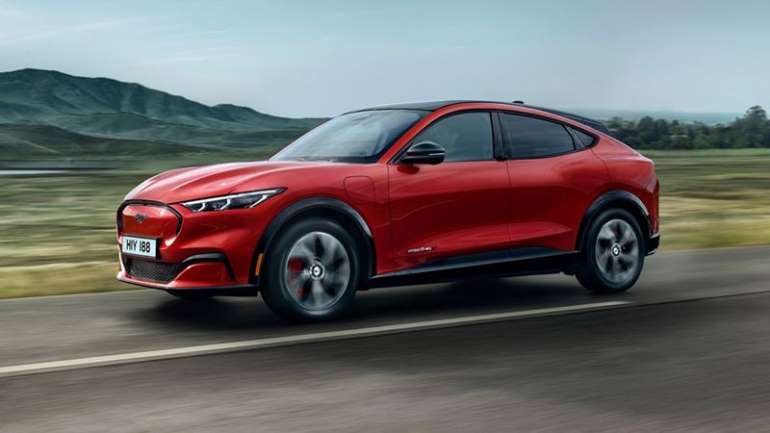 Ford’s latest pony car is a near-silent, totally environment-friendly galloper shaped like a crossbreed cocktail of Aintree winner and steeplechase champion. Badged Mustang like millions of great American sports cars launched since the nameplate first popped up in 1964, the Mach-E is heralded as decidedly dynamic EV which puts street cred above cabin acreage and presence before lollipop aerodynamics.

Similar to the reborn Bronco, the e-CUV is designated to build a bridge between the brand’s glory years and a planet-friendlier tomorrow. Question is, where exactly does the electric Ford rank in the fast growing catch-up queue which includes new arrivals like the VW ID.4 and the Volvo XC40 Recharge? 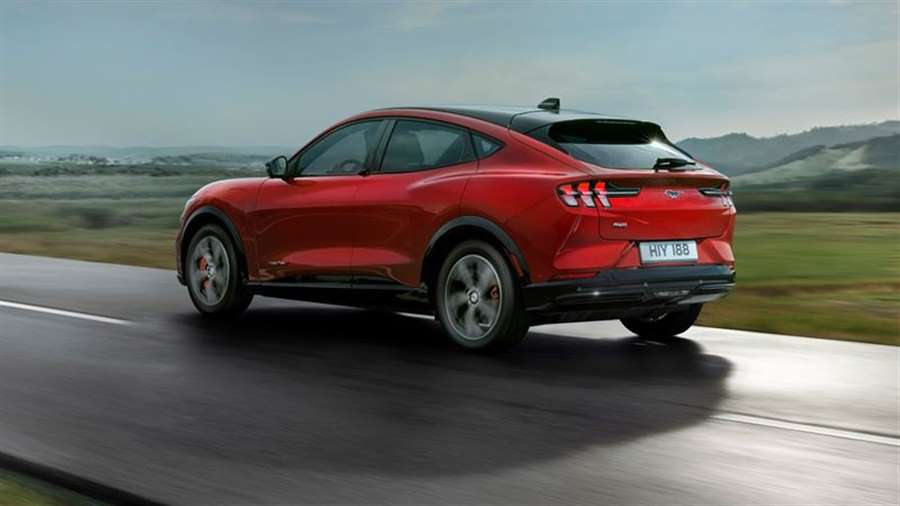 Give me a spec debrief

Designed in Dearborn, the Mach-E is arguably not quite centrefold pretty but well proportioned, functional and unmistakably Ford; like a grown up Kuga with pursed painted lips and a nicely rounded rear end with Mustang-style taillights. 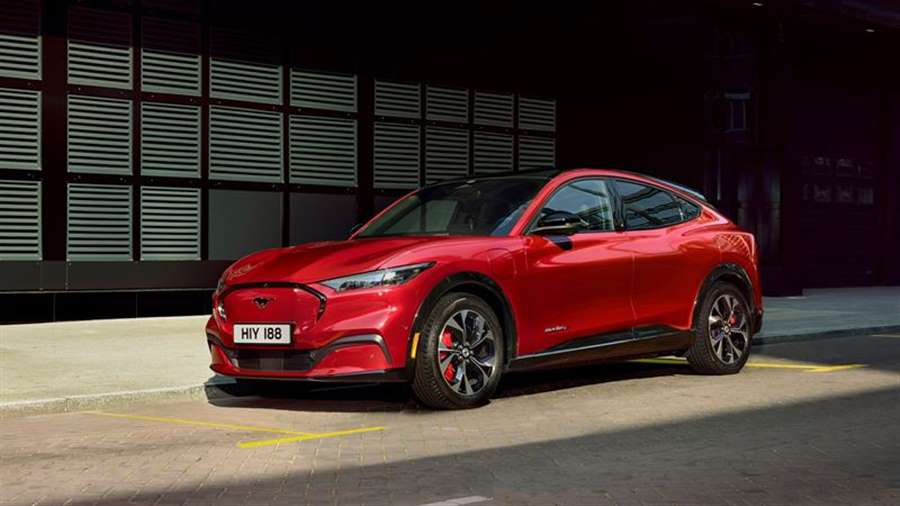 The cosseting cabin of the electric Ford is a notably more up-market suite on wheels than the loveless driver environment of the Tesla clad in plastified hide and jinxed with below-par build quality, the cheapo somewhat off-the-mark interior of the ID.4, or the iPace work station which appears to be different mainly for the sake of nonconformism. There’s a larger-than-life centre touchscreen running Ford’s new Sync 4 infotainment, complemented by a smaller rectangular display in the driver’s direct field of vision. With the exception of the rotary volume control, the buttons on the steering-wheel and the circular gear-selector first copyrighted by Jaguar, access to all MMI areas is by touchscreen and voice control.

Ford’s Sync 4 infotainment: does it work?

All first edition models (like our test car) of the Mach-E are already sold out, so your choice in the UK comprises Standard or Extended Range versions, both available with either rear- or all-wheel drive. Prices start at just over £40k before the plug-in car grant has been applied. 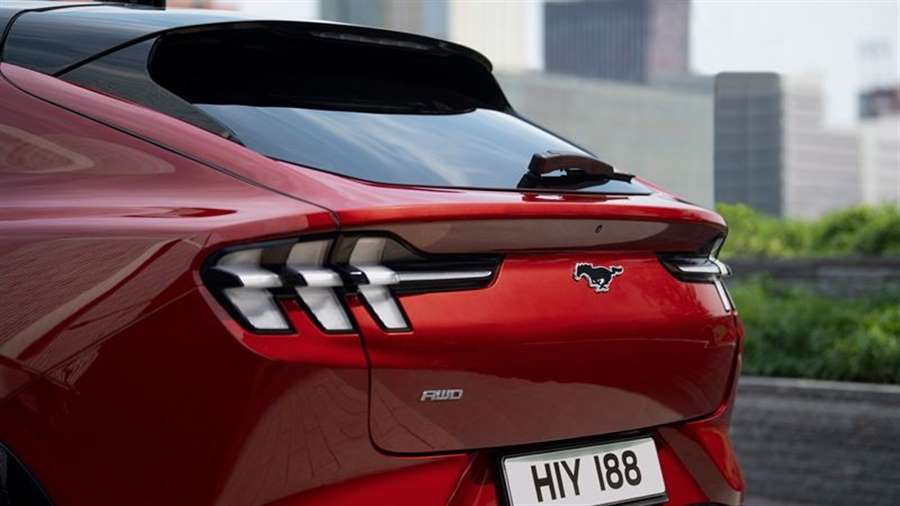 Here are the different versions:

Ford is also planning a Performance Edition, though that’s as-yet unconfirmed for the UK. For comparison, the most potent Mach-E is around four grand more expensive than the 340bhp Model Y AWD, which fields a less potent 72.5kWh battery but will accelerate in 5.1sec from 0-62mph, reach a top speed of 135mph and can charge with up to 250kW. While the blue oval effort is restricted to 111mph, it matches its key rival against the stopwatch, and it boasts 21 miles of extra distance.

Let’s drive!
Oddly, the first few miles disappoint. What’s wrong with this chewing-gum steering which feels as if a rope with a sack of potatoes attached to both ends was straddling the rack? Switching off the lane guidance fixes it: no more woolly self-centering now, no half-hearted auto-corrections, no vague feedback with increasing lock. The insurance companies love these assistance systems, committed drivers hate them. 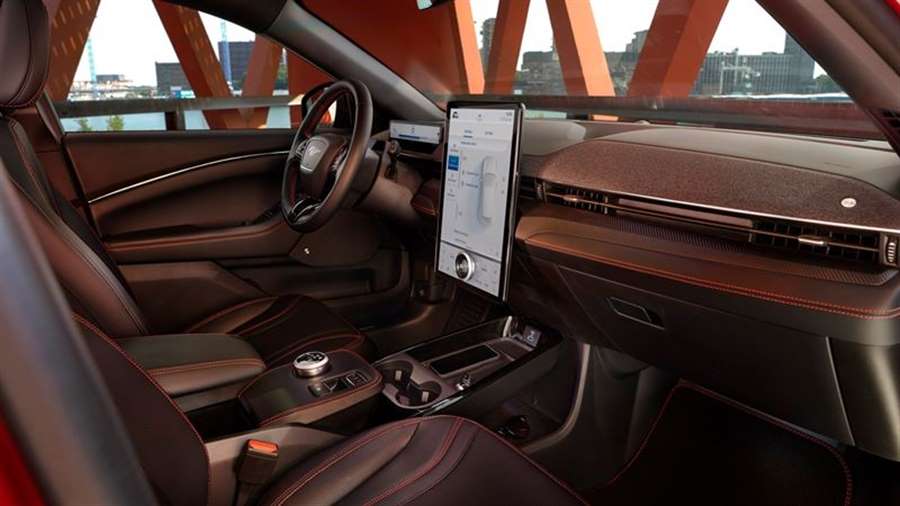 After many hours behind the wheel, the steering no longer feels quite so odd, though that V-shaped self-centering phenomenon and the on-lock lightness have not gone away completely. Instead, assets like the pinpoint accuracy, the relatively tight turning circle of 11.6 metres and the balanced damping have come to the forefront.

The low-speed ride is knobbly, but that weighty skateboard underneath gets into a rhythm above 40mph. Composure remains flat at all times (thanks to the low centre of gravity and a pair of anti-roll bars), and the straight-line stability is as unperturbed as the car’s stance through hurried changes of direction, under hard braking and when staging a borderline overtaking act which is obviously never ever interrupted by a potentially critical upshift action.

How fast is it?
Well, to make the best use of the Mach-E is to play with the new drive modes, poetically named Whisper, Active and Untamed. In Whisper, the steering is too light and there is a Do Not Disturb sign dangling from the accelerator pedal. In contrast, Untamed cannot wait to unlock the high voltage corral and speed up the direction determinator, but the computer-generated driving noise sounds like the tumble dry programme of a distant washing machine, lift-off exaggerates that controversial one-pedal feel, and fake downshifts are the rule under braking. No, thanks. So, Active it is, which strikes a purposeful balance between relaxed and excited, makes coasting a way of life, subtly synchronizes the sensations telegraphed to your palms and feet. Sadly, there are no shift paddles to play with, be it to trigger instant energy regeneration or release momentum for a more emphatic flow.

Still in Active, the brakes are every bit as attentive as the throttle, the stopping power is strong and progressive, and despite repeated attempts we could not detect the exact transition point between electric and hydraulic deceleration. If anything, this time-warp energy-squashing system needs a strong right foot to combat the slowly rising pedal pressure.

Ford Mustang Mach-E: verdict
Ford’s first fully electric planet-saver is fun to drive, commendably efficient as well as cool to look at and to be seen in. The brittle low-speed ride and synthetic steering mark it down, but there’s a little more flair here than a Tesla Model Y.

Tagged under
More in this category: « 2021 Ford Bronco Sport Review: Who Ordered the Budget Land Rover? The Empire Strikes Back - Ford is the new model F-150 Raptor »