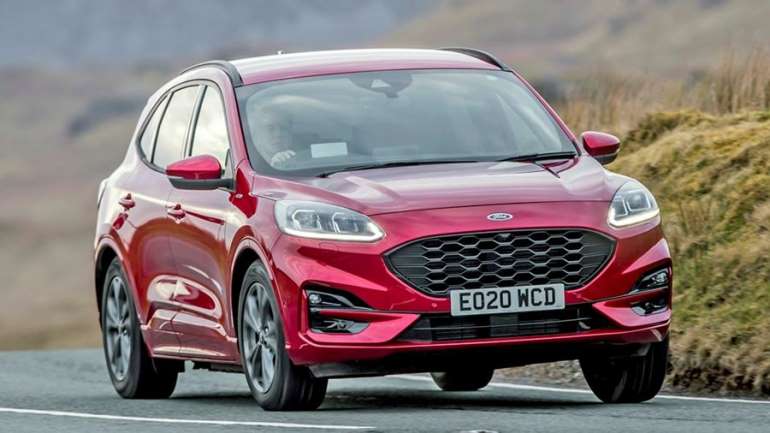 They say to understand where you’re going you need to know where you came from, but so stark is the contrast between this third-generation Ford Kuga and the Blue Oval’s first European mid-sized SUV – the developed-with-Nissan Maverick of 1993 – that the scholastic learning is worthy of a Masters dissertation in crossover evolution.

In fact, it’s quite the leap from its immediate eight-year-old predecessor, having grown (89mm longer, 44mm wider), yet become more lithe (6mm lower, up to 80kg lighter) in the process. 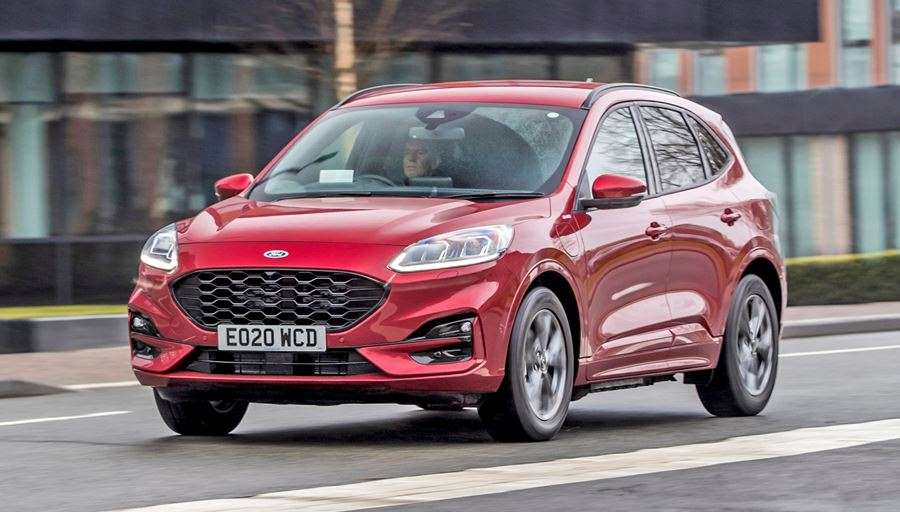 Doesn’t it look, you know, very Focusy?
As with both previous iterations of Kuga, the Mk3 shares its platform componentry with the contemporary Focus, but this time around the styling closely apes its hatchback sibling. Perhaps too much so.

It looks softer, less aggressive, with a lower window and bonnet line than before, giving the impression that it is a Focus that’s been stretched vertically – there’s a fine amount of headroom, incidentally.

Plus, if you opt for an ST-Line or Vignale trim level – this is an ST-Line First Edition in the pictures – there’s so much colour-coding going on that the Kuga loses some of the visual toughness associated with unpainted plastic bumper mouldings and wheelarches. You’ll have to stick to the lower end of the range if you favour those cues. Or buy a Focus Active… 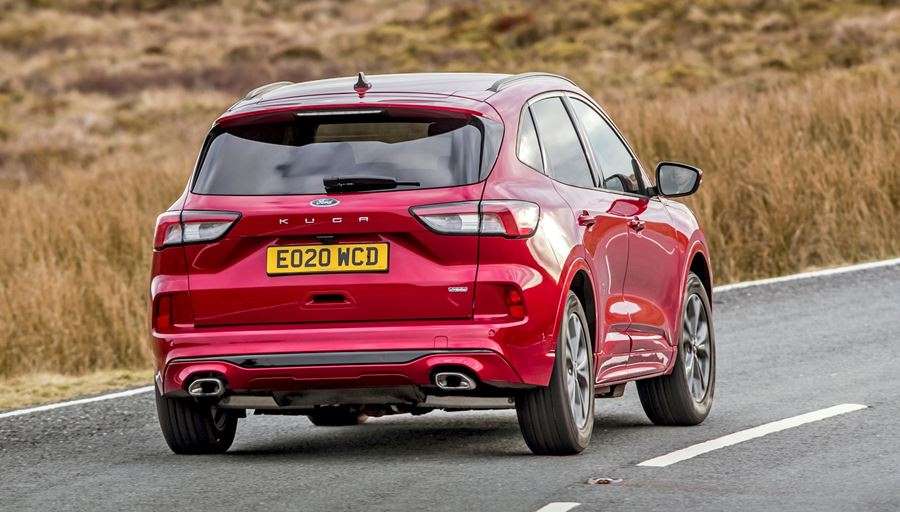 How’re those Focus underpinnings working out?
Very nicely. We’ve previously lauded Kugas for their handling prowess among others in a segment where it’s previously been high on the R&D wish list. Certainly, while the competition’s caught up considerably, the latest Kuga still noses ahead.

It’s not quite the zesty class leader the latest Ford Puma is in the category below, but we’d go as far as to say that the Mk3 Kuga is a better drive than many Focus hatchback derivatives. 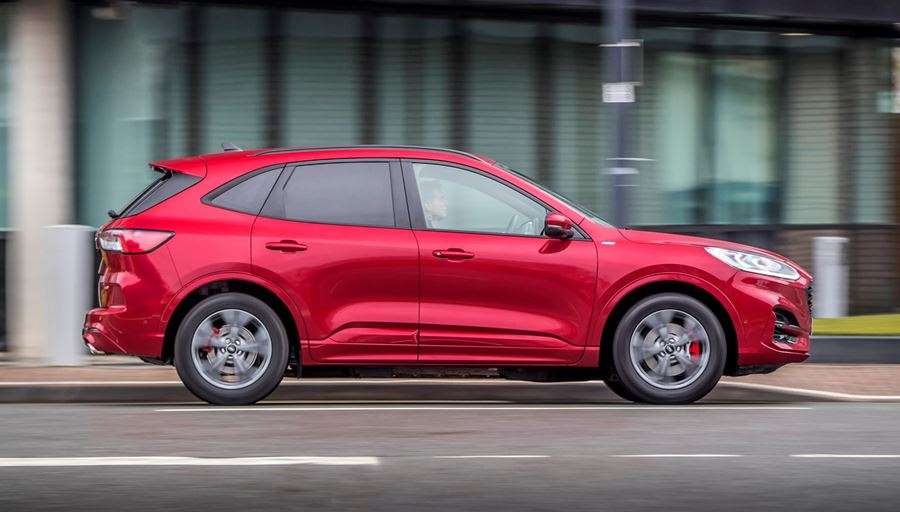 Sorry, I nearly sprayed my tea everywhere – better than a Focus?
Absolutely – don’t forget the majority of the Focus line-up makes do with a less-sophisticated torsion beam arrangement out back, whereas all Kugas benefit from all-round independent suspension.

In short, not only does the Kuga feel superbly composed when tackling a series of sweeping bends – aided and abetted by feelsome, if a tad light, steering – body control is well-contained, too, ensuring it doesn’t list around corners like a vessel on the Solent.

Ride quality is the other beneficiary of the trick suspension, although it’s slightly compromised by the firmer damping arrangement on ST-Line models with their Sports set-ups. Still, the 60-profile rubber further irons-out the sharpness of most road surface imperfections. 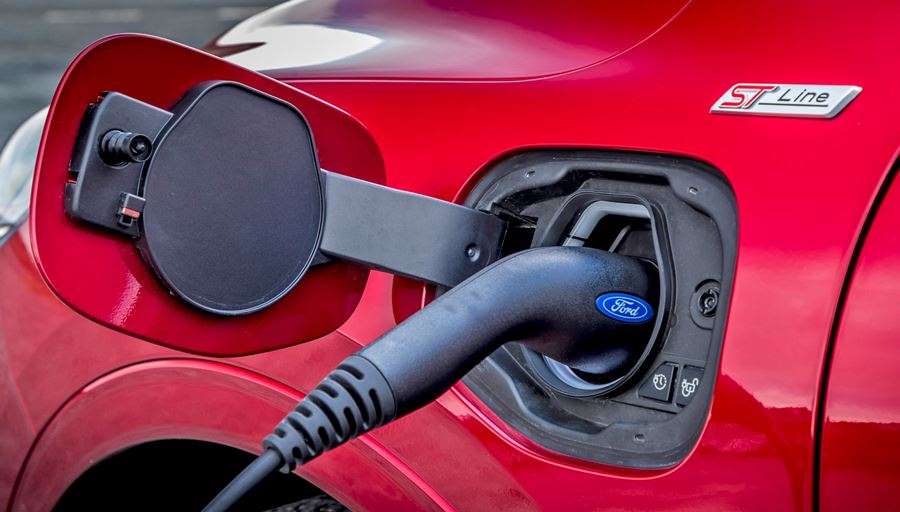 What’s new on the engine front, then?
It’s a blend of EcoBoost petrol and EcoBlue diesel powerplants familiar from across the Ford line-up, with all but the pokiest 188bhp oil burner available solely with front-wheel drive. If you’re considering using a Kuga where the asphalt runs out, you’re off-roading wrong.

More importantly, Ford’s finally getting its act together in terms of electrification: there’s an EcoBlue mild-hybrid with a 48-volt system, plus the plug-in hybrid range-topper tested here. There’s also a non-plug-in version of the same package. 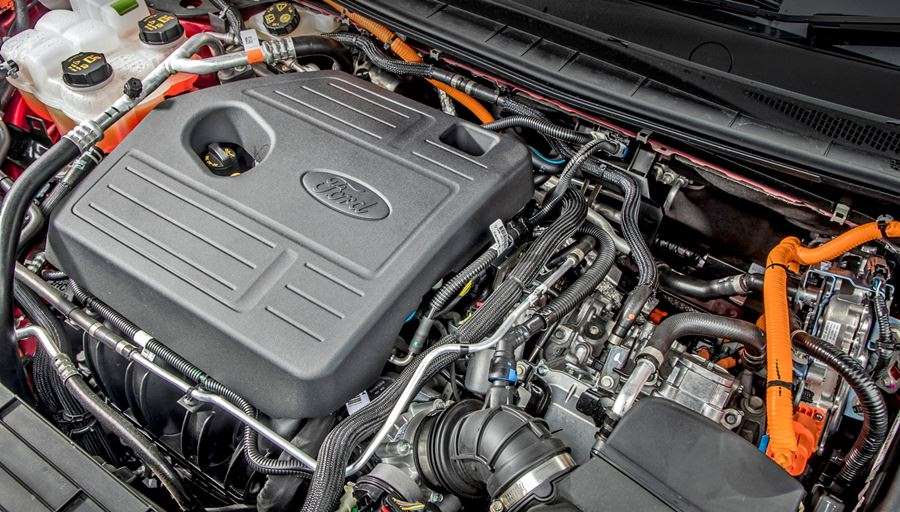 Unlike rivals’ PHEV offerings where a tiny turbo petrol motor’s used, Ford’s plumped for a 2.5-litre four-pot operating on the more efficient Atkinson cycle. Rather than the electrical powertrain components simply being added to the engine as a bolt-on, here the two work as a package: the electrical energy is used to compensate for the lack of a forced induction system at lower revs, with the engine joining in when it can do so efficiently.

Together the power units produce 222bhp, with the electric motor accounting for 108bhp of that, confirming the unstressed nature of the engine. Ford claims over 200mpg under the latest, more rigorous WLTP testing regime, but once you’ve sapped the batteries, a figure closer to 40mpg is more likely in the real world.

Various driving models are on offer, as well as the ability to store electrical energy ready for driving in a ULEZ area. Officially, the 14.4kWh battery pack will serve up to 35 miles of zero-emissions driving and should only take around three hours to charge on a dedicated wallbox.

It’s brisk, rather than quick – the 188bhp diesel Kuga’s faster, stat fans – but at 32g/km of CO2 this one’s going to have user choosers drooling in a way Mitsubishi’s Outlander PHEV simply doesn’t.

Channelling that grunt to the forward axle is a Ford-developed CVT transmission, with artificial ratios within its software to mimic a more conventional automatic. It works to a degree, but it still causes the engine to work harder at lower speeds, which sounds loud and gruff in the process. 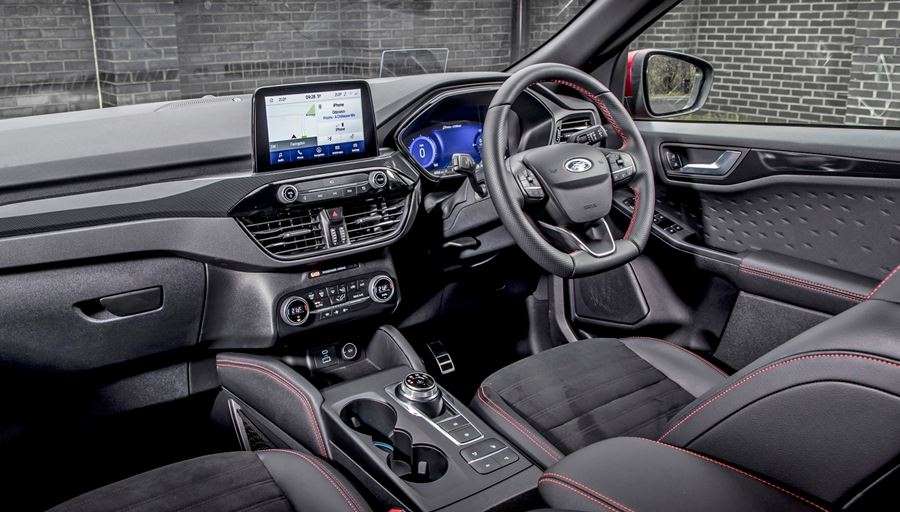 How easy is the Kuga to live with?
In typical Ford fashion: very. That it’s a Focus facsimile inside – albeit roomier – is not a shock, so it’s very easy to use, if not the most exciting dashboard to look at. Acres of black plastic and fabric doesn’t help give it much sparkle, either.

More importantly, it’s riddled with cubbies and sensibly shaped mouldings to keep all manner of cabin detritus located securely. Plus, there’s a smattering of USB points, an optional three-pin domestic plug socket and an available smartphone wireless charging plate with its own rubberised well.

Back seat occupants are especially well catered for in what Ford claims to be the roomiest C-segment SUV for those in the rear. It feels spacious, even on models without a glazed roof, a feat improved further by a sliding 60:40 split rear bench that also reclines.

Boot space is also generous, but the flimsy, fabric loadspace cover – which completely lifts out of the way when the tailgate’s open – smacks of requiring a Heath-Robinson trademark label. 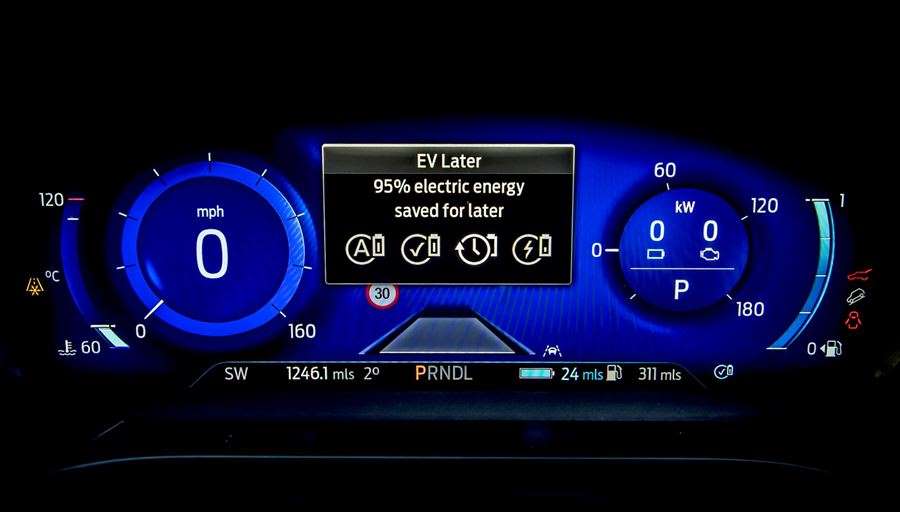 Packed with tech
Whether it’s technology to keep you safer on the roads, such as the various driver-assistance systems that contributed to the Kuga’s five-star EuroNCAP rating, or it’s a slicker, higher resolution edition of the Sync 3 multimedia touchscreen with colours that at last don’t look like they’ve been through a boil wash, most versions are well kitted-out.

ST-Line models and higher also have a very slick 12.3-inch digital instrument cluster that’s configurable and changes colour depending on the driving mode. Most also include an icon of the rear of a Mondeo – well, Fusion, really – but Sport is illustrated by a Mustang GT and Sand/Snow with an F-150 pick-up. Neat touch.

Don't forget the mild hybrid!
As Ford ups its electric game – even unveiling an EV version of its F-150 pick-up in the US – it’s easy to overlook the modest-sounding mild-hybrid version of the Kuga. Especially as it’s a diesel – yes, those old things.

Lurking in the middle of a line-up that also includes petrol, diesel, ‘self-charging’ hybrid and plug-in hybrid, the EcoBlue Hybrid version of the Kuga works extremely well on the road, and for many it could also be the version that consistently delivers true economy and efficiency.

It’s based on Ford’s 148bhp four-cylinder turbodiesel. The alternator is replaced by a multi-tasking belt-driven integrated starter-generator. It captures energy from braking and coasting, storing it in a 48-volt battery. That energy makes the automatic stop-start system more effective; it can be used to support the engine; and it helps run various electrical ancillaries.

The BISG works as a motor, but takes up little space and adds little weight. Similarly, the 48V battery has a modest capacity – it doesn’t allow electric-only driving – but it’s enough to help ease the load on the engine, reducing emissions and improving fuel consumption. And it does that throughout every journey, unlike a PHEV, which only works at its best if charged frequently.

On our brief test drive, we couldn’t match the official 55.4mpg, but we did manage figures in the high 40s, which is impressive considering that we were gettting a move on, and enjoying the EcoBlue unit’s hearty pulling power. On the move it’s smooth and quiet, and married to a six-speed manual gearbox that’s slick enough to encourage frequent shifting, so you keep the engine in its sweet spot.

Ford Kuga: verdict
So, how much is all this going to set you back? The Kuga line-up starts at £26,445, and carries on almost as far as £40k. So it's not the cheapest of relatively compact mainstream crossovers. But why should it be? It drives well, it's well equipped and has an all-round air of quality about it.

It’s going to have user choosers reaching the end of their Outlander PHEV leases clambering for a more satisfying SUV to drive.

In benefit-in-kind terms, a 20% rate taxpayer’s only going to be looking at a £60 monthly bill to run one as a company car. Expect to see a lot of these on the road, and know that the drivers are enjoying more than just good real-world value – it's also good to drive.