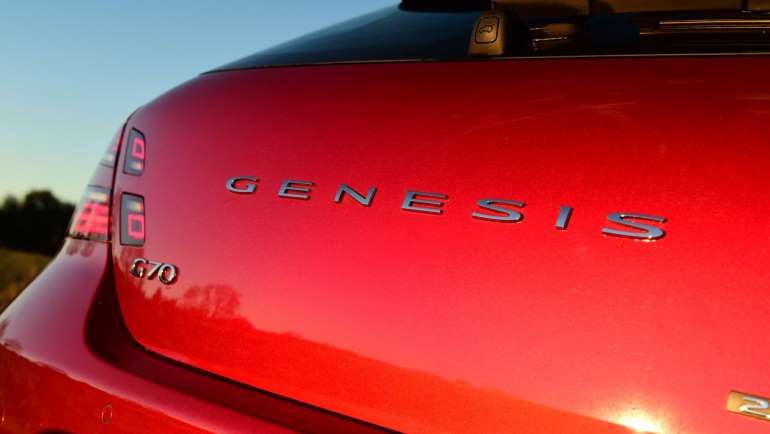 Out of the wide range of models from the fledgling Genesis brand, the G70 is the least convincing. It’s competitively priced, but let down by a very cramped cabin that lacks the sense of occasion as other models in the family. Dynamically it lacks a little sophistication to the best premium rivals, too. But if you’re sold on the looks (and we’re sure many will be) and you can live with the lack of space, then it’s still an intriguing offering.

This is the Genesis G70 Shooting Brake, the latest offering from Hyundai’s premium brand offshoot. Sitting alongside its existing range of smart saloons and imposing SUV’s this striking estate has the BMW 3 Series Touring in its sights.

If it was fighting on looks alone, we wouldn’t bet against it. In a segment where style counts for a lot, the G70’s sleek estate body certainly cuts a handsome figure, but it’s not without its compromises.

But first, the technical stuff. The car is new to us in the UK, but the model you see here is a facelifted version of a car that’s been in production since 2017. That Hyundai connection gives Genesis access to a wealth of tech from various other models in the Korean giant’s range.

Most notable here is the G70’s basic platform. It’s shared with the Kia Stinger, which means rear wheel drive but, sadly, UK buyers don’t get the Stinger’s 3.3-litre twin-turbo V6. Engine choices include a 241bhp 2.0-litre turbocharged petrol, and a 2.2-litre diesel with 197bhp, which we’re driving here. An eight speed automatic gearbox is standard for both.

Each of the previous Genesis models we’ve tried have all impressed with a contemporary, minimalist and high quality cabin. In contrast, the G70 feels like a little bit of a letdown. There are some neat details; the red stitching and contrasting seat belts help to lift the cabin, and the 3D-effect digital dials are brilliant, but the overall design looks like it’s come from a previous generation of Genesis model.

The infotainment system is right on the money compared with those in other premium offerings though. The graphics here look razor-sharp and loading times are quick enough. The dashboard features a row of physical shortcut buttons that give easy access to all of the system’s major functions. Build quality is decent, but not class-leading.

But the slightly underwhelming finish is not the greatest of the G70’s problems, because the back seats are very cramped. Even with a driver of average height, another adult will struggle for knee room behind. Headroom isn’t brilliant and the central tunnel running along the floor is huge, so it feels very cramped. Some superminis are more spacious.

Things don’t improve out back, either. The shallow load floor means the boot is also a small 403 litres, around 100 less than most rivals. Fold the rear seats and it’s a little more promising though; the 1,535-litre total is on par with the competition.

Things improve on the road, though. The G70 slots into a class where there’s a lot of sharp handling options, but it doesn’t humiliate itself – far from it. The rear-driven chassis has a natural balance, which combined with quick steering and plenty of grip, allows you to throw the G70 around with similar enthusiasm to a 3 Series Touring.
However, there is a trade off, and that’s ride comfort. It’s not harsh as such, but the suspension refuses to settle down at any speed. So while it’s fun to drive when you’re in the mood, the G70 can’t stop fidgeting when you’d rather it would just relax a little.
40

And that’s if the diesel hasn’t already soured the mood. Start it from cold and you're subjected to an unpleasant clatter, and though it settles down when it’s warm, refinement still isn’t a strong point. The 7.7-second 0-62mph time seems optimistic, too, so performance is merely okay rather than exhilarating. On longer journeys, we did see the G70 easily top the official WLTP 40.7mpg fuel consumption figure, though.

It’s not only the fuel consumption that’s competitive for the wallet, the financials in general stack up quite well. Pop down a £5,000 deposit on a three-year PCP with a 10,000-mile annual limit, and the G70 Shooting Brake diesel in this top spec Sport Line trim comes to £665 per month. The closest match in the BMW 3 Series range is the 320d M Sport Pro Edition, and the numbers are almost identical – the German comes to roughly £2 more each month.

With the G70’s standard kit list out-punching the 3 Series’, with standard-fit ventilated front seats and blind spot cameras, that makes it worth a punt – but only if you fit in the cramped interior. Anyone who can easily reach high shelves need not apply.

Tagged under
More in this category: « 2022 Genesis GV70 Review: Has Genesis Finally Nailed It? Tested: 2022 Genesis G80 Sport Gets More Spring in Its Step »