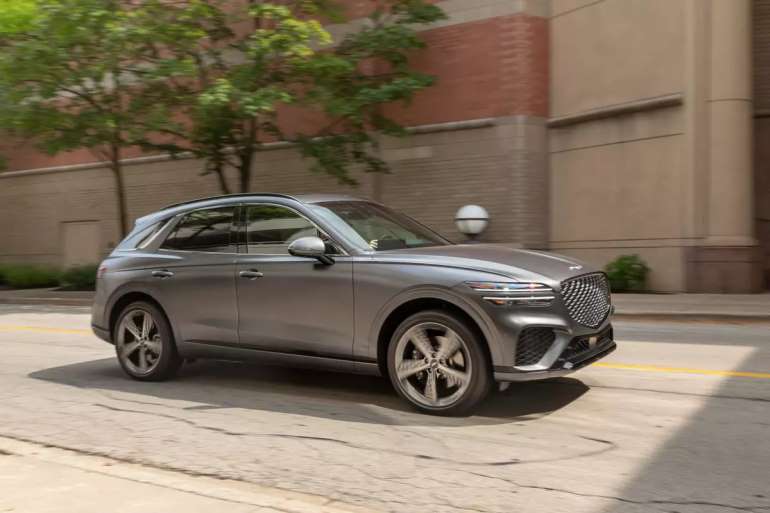 Verdict: The all-new Genesis GV70 is a joy to drive, and it mimics its luxury competitors both in its ability to provide high style and in its occasional highly questionable design choices.

Versus the competition: Still perhaps a notch below its German rivals, the GV70 is Genesis’ best attempt yet to establish the South Korean brand’s credibility as a luxury marque.

As Genesis fills out its lineup, the latest vehicle to join the South Korean brand’s assault on established luxury rivals is the 2022 GV70 compact SUV. Hyundai’s luxury division, Genesis became a separate brand for the 2015 model year, and we’ve long been fans: We named the 2019 G70 sedan our Best of 2019 winner, and the pre-brand-spinoff Hyundai Genesis sedan was our first ever Best Of winner back in 2009.

With the GV70, Genesis has set its sights squarely on the lucrative luxury compact SUV class, including competitors like the Audi Q5, BMW X3 and Mercedes-Benz GLC (plus a whole host of others from brands not based in Deutschland). Can the GV70 compete in such a loaded field?

One of the things we love about the G70 sedan is how much fun it is to drive, and it’s no surprise that the GV70, which shares the same platform, retains some of that fun. Really, “some” is an understatement: The GV70 — at least the twin-turbocharged 3.5-liter V-6 Sport Prestige version we tested — is a blast to drive. It’s not full-on bonkers like a BMW X3 M, Mercedes-AMG GLC63 or Alfa Romeo Stelvio Quadrifoglio, but all three of those SUVs are at their best on a track. The GV70 Sport Prestige strikes a nice middle ground, more like a Mercedes-AMG GLC43, BMW X3 M40i or Audi SQ5.

The GV70’s 3.5-liter makes 375 horsepower and 391 pounds-feet of torque. Also available is a turbocharged 2.5-liter four-cylinder engine making 300 hp and 311 pounds-feet that we haven’t yet driven. Both are paired with an eight-speed automatic transmission, and all-wheel drive is standard on all GV70s.

Press the gas pedal and you’ll notice a bit of lag. Depending on your personal preference, you may find it annoying or you may enjoy the buildup before the GV70 takes off. Putting the driving mode into Sport or Sport Plus (the latter is only available on Sport models) seems to improve response time a bit. Either way, though, once you get going, the GV70’s twin-turbo V-6 pulls hard.

Ride and handling are also impressive. There was some impact harshness over bumps and imperfections, but I chalk that up mostly to the giant 21-inch wheels on our test vehicle. (The wheels can be as small as 18 inches, trim depending.) Otherwise, the adaptive suspension does a great job providing a cushy ride in its more comfortable settings, then firming up in Sport and Sport Plus. I was also impressed by how little body roll I felt during my time behind the wheel, though some of our editors felt more than I did.

GV70 Sport Prestige models add an electronically controlled limited-slip differential that aids in handling, and while it’s not quite up to par with the G70, the GV70 feels nimble, with decently communicative steering. More aggressive driving modes add a bit of extra weight to the steering feel, but they don’t do much to improve feedback or inspire confidence during more spirited driving.

My sole complaint about the driving experience lies with the GV70’s brakes: It takes a lot of effort to move the pedal, and the brakes themselves sometimes felt like they were being overworked trying to haul the GV70 to a stop. Something with more bite and easier, more linear pedal feel would do wonders for the GV70.

You’ll find some good and some bad inside the GV70. Genesis says its design approach was “inspired by the aerodynamic sections of aircraft wings”; as such, you’ll find elliptical shapes everywhere inside. It gives the GV70 a sort of retro-futuristic, Atomic Age vibe that I really enjoy.

Materials quality in the top GV70 trim stands out, with Nappa leather upholstery and suede inserts — and as you can see in the photos, it doesn’t have to be a boring color. I drove an Audi Q5 Sportback shortly after the GV70, and the Q5’s interior felt a bit more solidly put together than the Genesis’, but overall, the GV70’s interior is right up there with its peers.

Interior space, however, can feel a bit lacking. The front seating area is dominated by a large center console and might feel cramped to some, but I thought the snugness enhanced the GV70’s sporty feeling. The backseat offers decent amounts of head- and legroom, but at 6-foot-1, I found it difficult to sit comfortably behind my driver-seat position. Cargo space is also a bit tight. It felt adequate for daily errands, but our testing measured it at 16.15 cubic feet; that’s less than we measured in a Mercedes-Benz GLC coupe, which is the kind of SUV we always knock for sacrificing utility for style.

From a technological standpoint, the GV70’s 14.5-inch touchscreen display has crisp graphics and looks quite sharp. Apple CarPlay and Android Auto are standard, but not wireless. The GV70 also offers driver profiles that are accessible via a variety of methods, including a fingerprint scanner mounted to the right of the steering wheel. It certainly feels futuristic, but you don’t have to use it if you don’t like the idea of your car having access to your fingerprints.

Cars these days can’t seem to be luxury cars without a few questionable design choices, and the GV70 has a few inside. First, that 14.5-inch touchscreen is placed so far away from the driver’s seat that even my arms and their 36-inch sleeve measurement couldn’t easily reach it. There’s a raised dial controller — though not the confusing, flush dial you’ll find in other Genesis models — to help alleviate that issue, but controllers are not the ideal way to navigate touchscreens, particularly when using features like CarPlay.

Speaking of dials, guess what else in the GV70 is a dial? The gear selector. Having two raised dials adjacent to each other in the center console was confusing, and I often found myself grabbing the gear selector instead of the multimedia controller. Fortunately, like coins, the two dials have different textures, but it’s still frustrating. Adding to my personal frustration was that unlike most vehicles with multimedia controllers, the GV70’s is positioned ahead of the gear selector instead of behind it, though buyers not used to that sort of setup probably won’t care.

The 2022 GV70 is an Insurance Institute for Highway Safety Top Safety Pick Plus for 2021 (model years and IIHS award years don’t always line up). The GV70 aced every test, but the front crash prevention vehicle-to-pedestrian test. The National Highway Traffic Safety Administration had not yet tested the GV70 as of this writing, but when it does, you’ll find the results here. In our Car Seat Check, the GV70 received mixed scores.

Is Genesis Finally There?

We said once that the 2021 Genesis G80 sedan was “nipping at the Germans’ heels.” Well, the GV70 isn’t just nipping at the heels of German luxury compact SUVs, it’s taking full chomps.

With a starting price of just over $42,000, the GV70 undercuts the competition, though perhaps not as much as other Genesis models have in the past. Our test vehicle carried a sticker price of $65,045, which is more in line with performance-oriented — but not the highest-performance — versions of its competition. Once you start adding options to the German SUVs, however, the Genesis is likely to seem like an affordable option.

In terms of driving performance, the GV70 is certainly a luxury compact SUV, and the interior mimics the good (quality and style) and bad (questionable design and user interface choices) of many of its rivals. It should absolutely be on every luxury compact SUV shopper’s list, but whether it does enough to convince those who care what name is on their car remains to be seen.