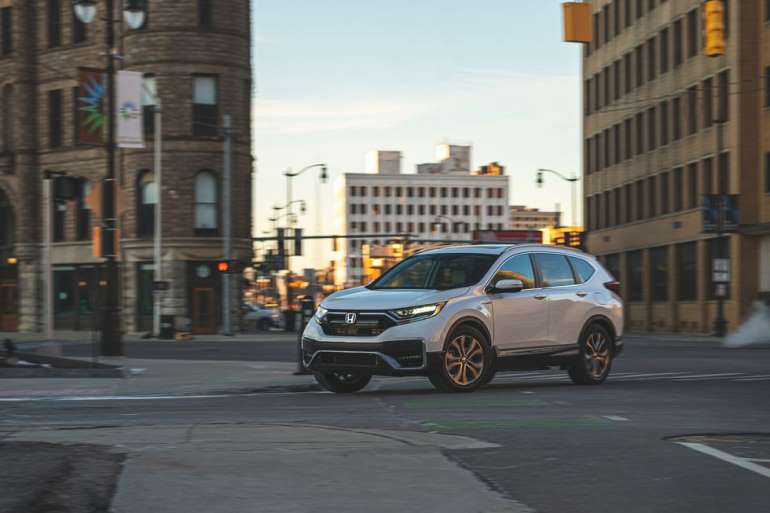 We begin a 40,000-mile shakedown of Honda's first electrified crossover to see if the powertrain scales up into the brand's bestselling vehicle.

We invited a 2021 Honda CR-V to join our long-term fleet so we could spend some quality time (and 40,000 miles) with Honda's bestseller and the fifth-bestselling vehicle in the United States. We chose the hybrid because it's new to the lineup and because we liked the 212-hp fuel-sipping powertrain in the Accord. In the CR-V, the system boosts fuel economy and performance, making it the choice for buyers who want efficiency and power. Those customers will have to shell out for it, though, given the CR-V Hybrid sits at the top of the range. In addition to shaking down the powertrain and seeing if it can deliver the promised fuel economy, we're hoping this compact crossover—the brand's first with hybrid power to make it to the U.S.—will give us a glimpse at the future of Honda, which will soon phase out gas-only powertrains in Europe. 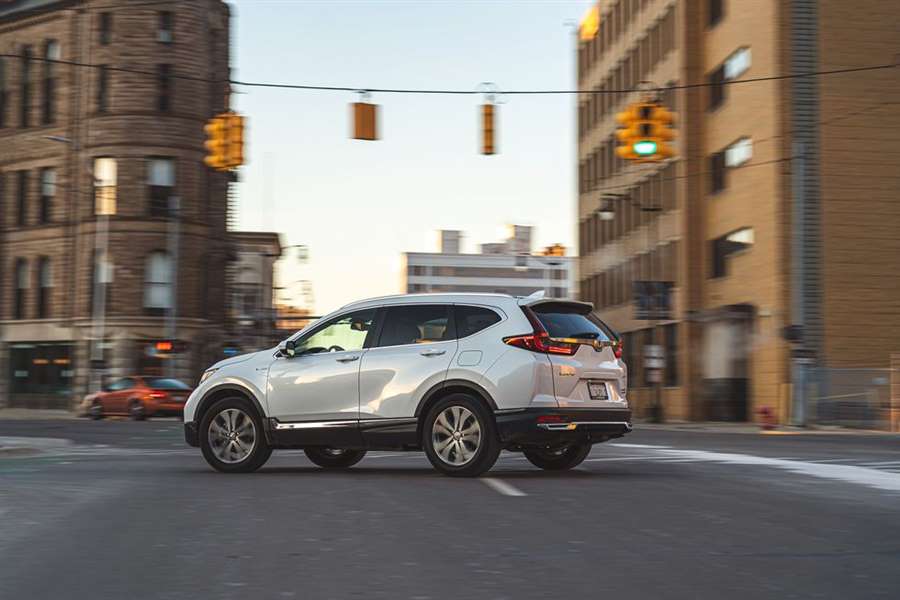 We ordered a top-of-the-line Touring model loaded with just about everything: leather seats (heated up front), navigation, wireless phone charging, Android Auto and Apple CarPlay integration, a nine-speaker audio system, a liftgate that opens when you wave your foot under the bumper, proximity key entry, remote start, the Honda Sensing suite of driver-assistance features, and more. Our $37,920 example has but one option: white paint for $395. Perhaps it's because all of southeast Michigan is currently covered in two feet of snow or because half the vehicles in the grocery-store parking lot are also painted in America's favorite automotive hue (and shaped like tall boxes), but the CR-V blends in a little too well with its surroundings. We wouldn't call the color choice regrettable but maybe a bit forgettable. 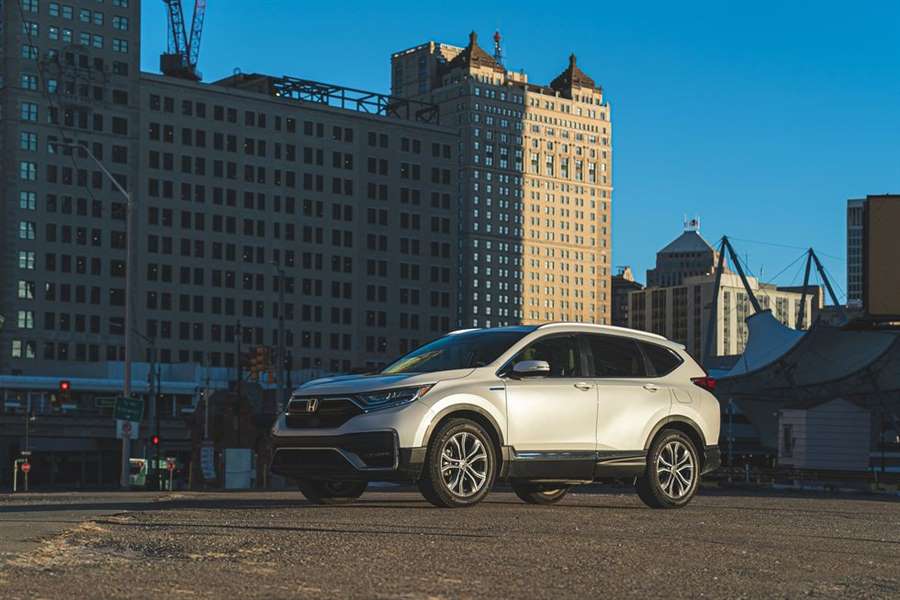 Inside, Honda's inoffensive design, easy-to-use 7.0-inch touchscreen, and highly adjustable center console should satisfy most shoppers in this class if not the nit-pickiest staffers on our masthead. Hybrid versions differ from regular CR-Vs in a few subtle ways. A unitless battery gauge replaces the tachometer in the digital instrument cluster and tells you vaguely how much juice you're using at any given moment. Honda also opted for a push-button transmission instead of the chunky gear lever used in the core model. Staff reaction to push-button shifters is mixed, but the setup at least makes for a tidy, unobtrusive center console. In the same way a light color creates the illusion that a room is larger than it is, the Ivory surfaces in our CR-V make the cabin appear adequately spacious, which, granted, it is, offering 103 cubic feet of passenger volume. Provided that light-beige leather can withstand the dye in our Levis, the simplicity of this interior all but ensures it will age well. 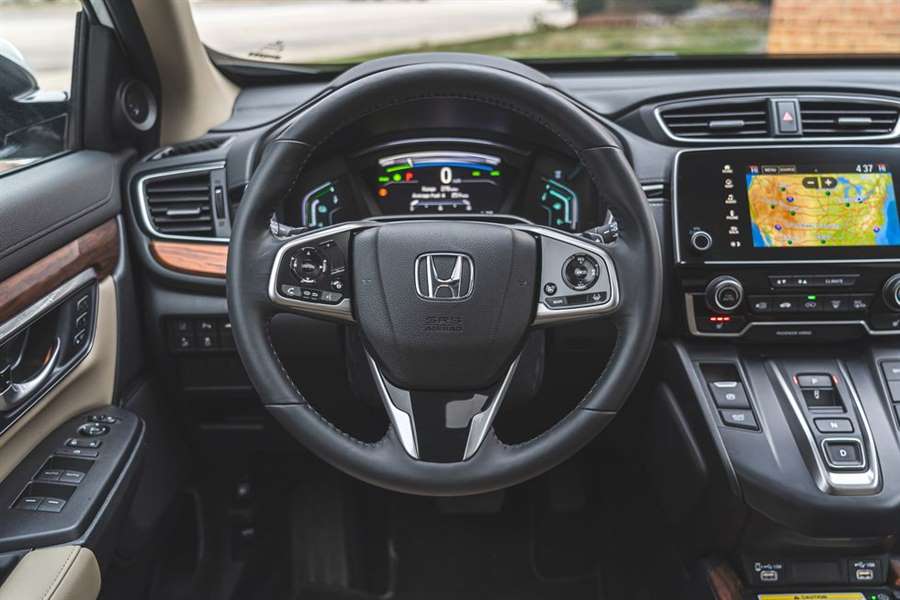 A couple of hybrid caveats to note: Choosing this powertrain nullifies the nonhybrid CR-V's 1500-pound tow rating, so technical editor David Beard will have to look elsewhere when he wants to tow his snowmobile. Which is just as well, considering the cargo hold probably wouldn't fit all of his gear. The gas-electric CR-V sacrifices six cubic feet of cargo space (and its spare tire) to the battery. The upside is that, compared with a regular all-wheel-drive CR-V, you gain 9 mpg in combined driving by the EPA's yardstick. That said, if you drive like we do, you can expect much worse results: We're currently averaging a mere 27 mpg. 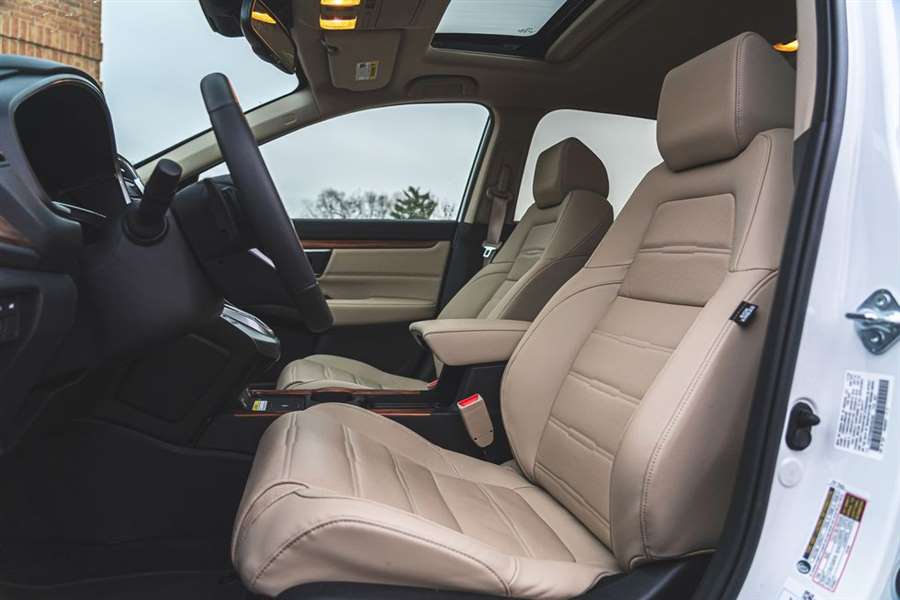 The Honda's road manners are in line with the amiable-but-boring norm of the segment. Its smooth ride and secure handling are immediately apparent, but there's nothing here that'll make an enthusiast grin—unless of course you're reading its VIN, which by dumb luck contains a bit of bathroom humor. Floor the accelerator and the powertrain fills the cabin with 75 decibels of sound. That's quieter than the regular CR-V's 78-decibel moan at full throttle. 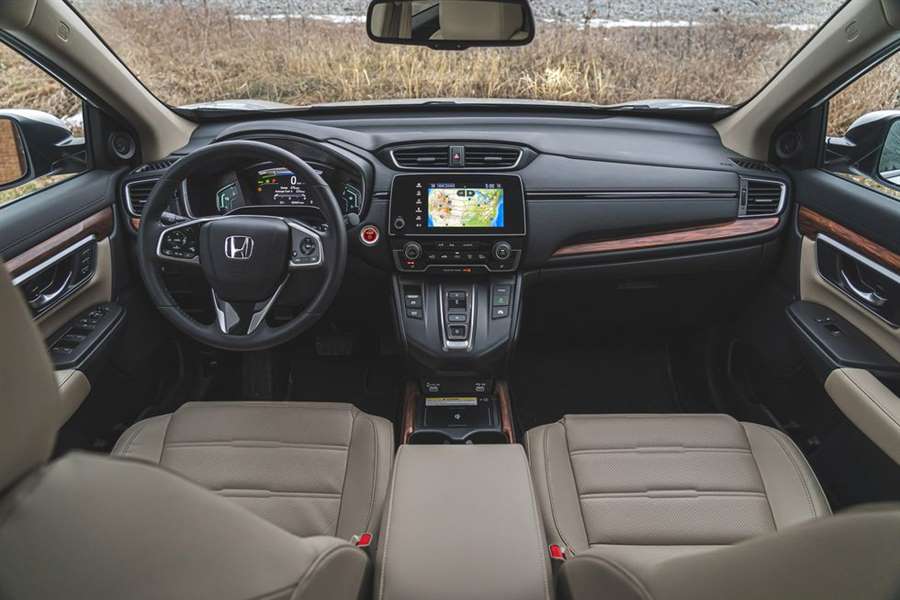 Due to COVID-19 restrictions, we haven't had as many butts in these seats as we'd like, but after soft-shoeing it through the break-in period, we sent the Honda to the test track. The hybrid's drive motor can contribute 232 pound-feet of torque from the get-go, which helps this ute reach 60 mph a tenth of a second quicker than the unelectrified model, but the latter catches up by 70 mph and pips the hybrid at the quarter-mile, 15.9 seconds to 16.1. Our long-termer also lagged behind the regular CR-V in braking (170 feet versus 165) and roadholding (0.80 g versus 0.85). Given both cars wear identical Continental CrossContact LX Sport tires, we suspect the hybrid's extra 190 pounds are primarily to blame. Fortunately, in the real world, this CR-V seems more athletic than the gas-only version, and its quicker 5-to-60-mph time bears that out. As we put more miles on the odometer, we hope to see some of these numbers improve—particularly the observed fuel economy. 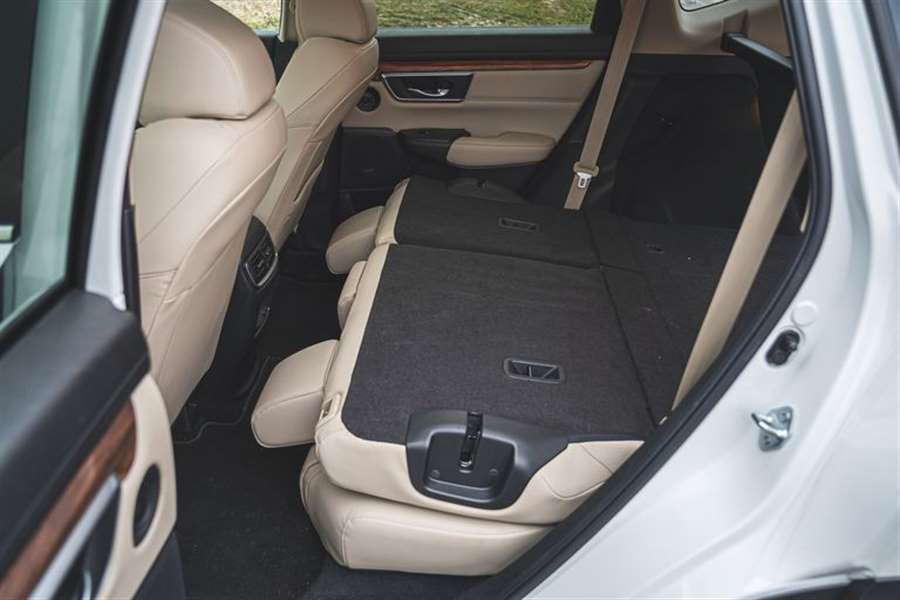