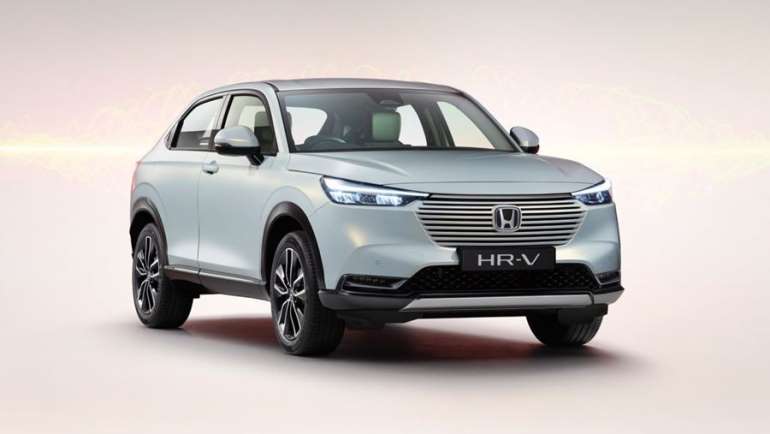 The all-new Honda HR-V was revealed earlier this year and now the firm has confirmed further details of the new car’s 129bhp e:HEV hybrid powertrain.

For the third-generation HR-V, Honda has given it a sleeker exterior design, an all-new interior and updated technology onboard. The new car will only be available as a hybrid and is expected to go on sale later this year with a starting price of around £25,000. 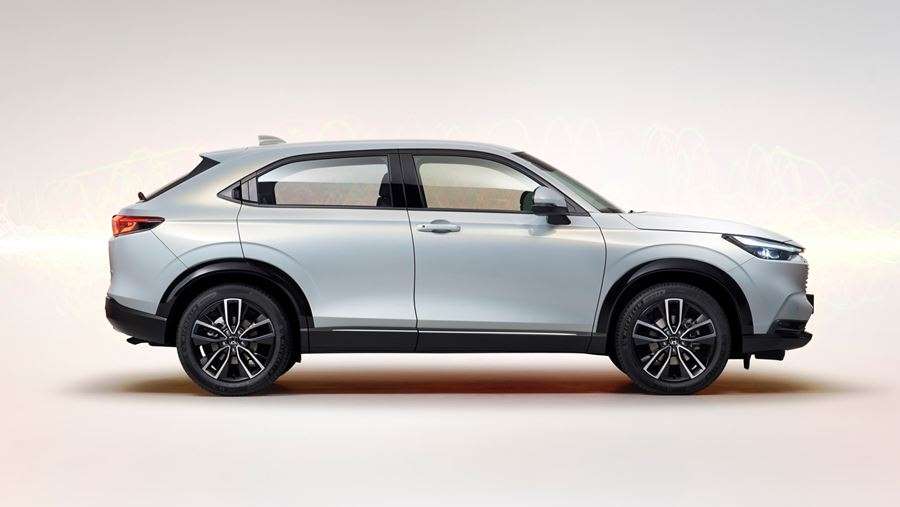 When it arrives, the new HR-V will go head-to-head with small SUV models including the Ford Puma, Renault Captur and Skoda Kamiq.

Honda has announced the latest HR-V will be powered by a 1.5-litre petrol engine mated to two electric motors and a CVT automatic gearbox. This powertrain is similar to the one used in the current Jazz but features a larger battery mounted under the boot floor. It also produces more power, with a total output of 129bhp.

The way the e:HEV hybrid powertrain operates is unique, with one electric motor powering the car along with the petrol engine. The second motor is connected to the engine but is used as a generator to charge the car’s onboard battery.

This powertrain will be capable of pure-electric running but Honda has not specified any range figures saying “In city driving, most of the time you can, as an accumulated time of driving, drive in pure-electric mode. However, we haven’t actually determined and measured, and also focused our development in terms of maximising the pure-electric range in one go.” 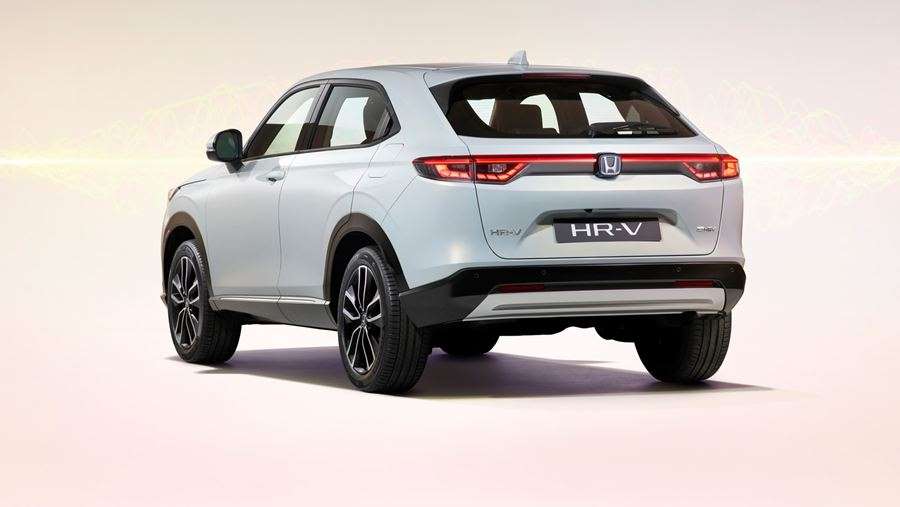 Honda discontinued its 1.6-litre diesel engine in 2020 amid freefalling diesel sales. The new HR-V is part of the brand’s ‘Electric Vision’ strategy, which aims to introduce hybrid or electric power to all of its mainstream models by 2022.

The new HR-V has a rakish design thanks to a coupe-inspired swooping roofline and a longer bonnet. Despite the sporty profile of the roof, which is 20mm lower than the old car, Honda claims the new HR-V can accommodate four adults in comfort thanks to improved packaging of the hybrid powertrain which results in an extra 35mm of rear legroom.

The front features a new integrated grille and slim LED headlights joined together by a narrow piece of chrome trim. The new HR-V also sits 10mm higher than before, with the sides of the car featuring black plastic body cladding around the arches and sills, together with a high indent line along the length of the car and a flush-fitting rear door handle. Large 18-inch five-spoke two-tone alloy wheels also feature.

The rearmost C-pillar is more sharply angled than before, leading to a new tailgate that houses a slim rear tail light cluster that wraps round from the rear quarter panel across the width of the car. 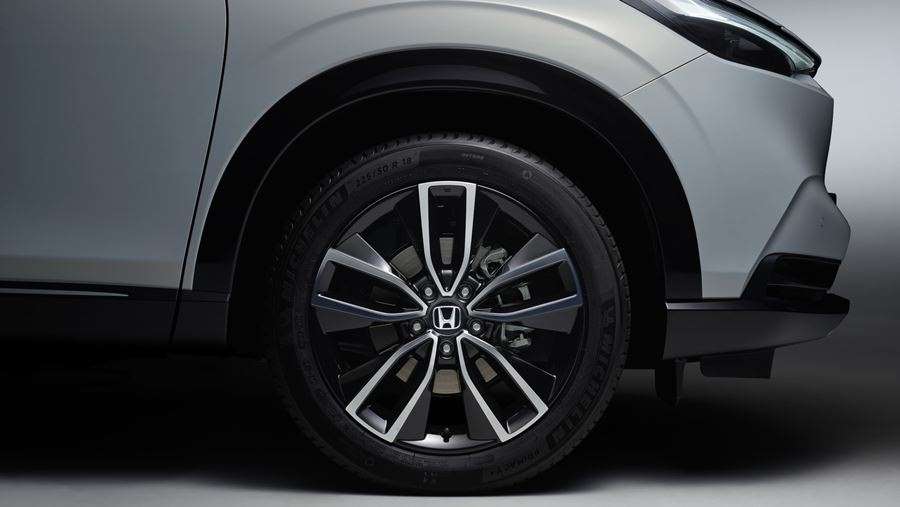 Inside, the dashboard has been redesigned with a new minimalist look. A nine-inch central infotainment touchscreen is mounted to the top of the dashboard, which appears to be running similar software to the system used in the Honda e, which includes sat nav and smartphone connectivity.

Honda has retained physical rotary dials for the climate controls in a wrap-around centre console with a refreshed gear stick design. The clean dashboard design features an ‘Air Diffusion System’ that replaces the traditional air vents in the centre of the dashboard. This comprises two L-shaped vents mounted by the windscreen pillars, which direct air along the inside the windows to adjust the interior temperature - all without blasting hot or cold air directly at the driver or passenger.

The brand’s versatile Magic Seats storage system also features, offering the option to fold the rear seats flat or to flip up the rear seat bases depending on the storage space required.

Full details of the new car’s interior tech and trim levels are expected to be announced later this year. 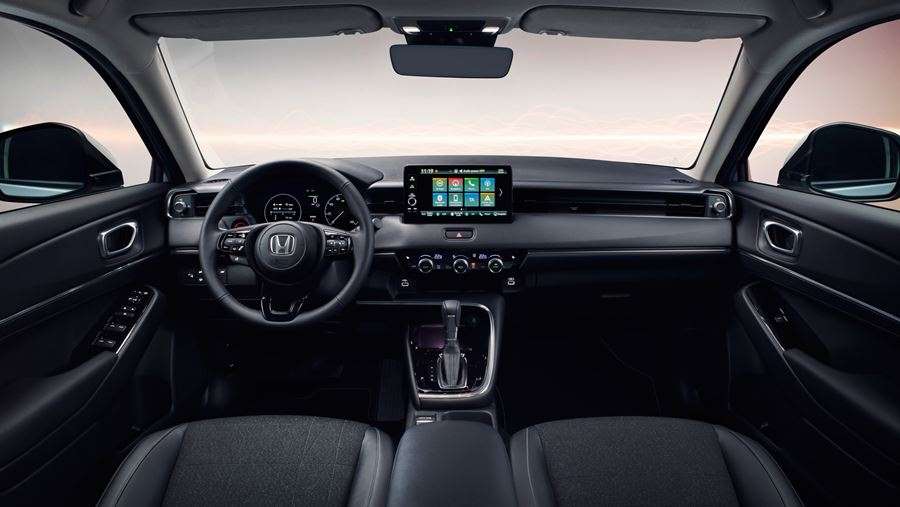 The new third-generation HR-V is fitted with Honda’s ‘Sensing’ safety suite adding an array of driver assistance technology. A new front camera is fitted, which has more processing power than before and improves both the car’s emergency braking and steering systems.

The new camera is able to better detect pedestrians detection, and is capable of recognising oncoming vehicles including cyclists and motorcycles, automatically applying the brakes when a hazard is detected. 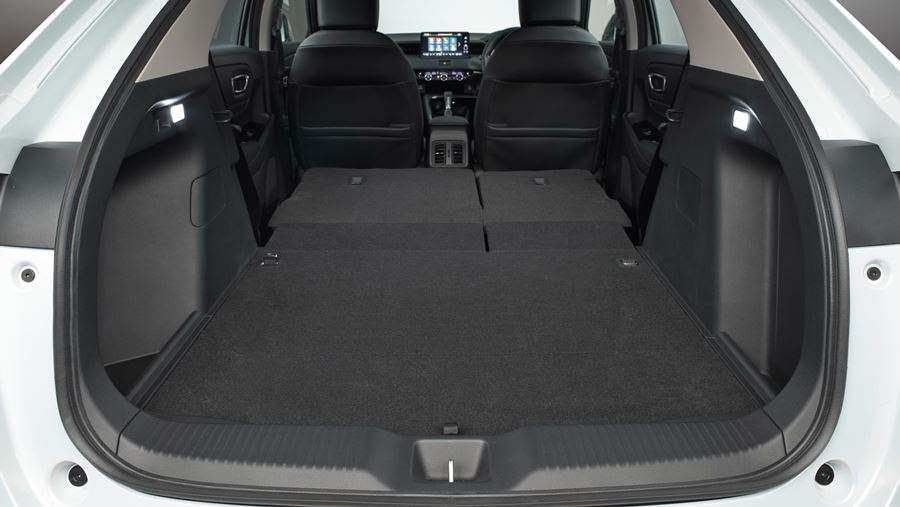 A new adaptive cruise control system is also included, with new advanced software meaning it can perform overtakes when prompted. The system can work out the acceleration and steering angles required to complete a passing maneuver, all with minimal input from the driver.