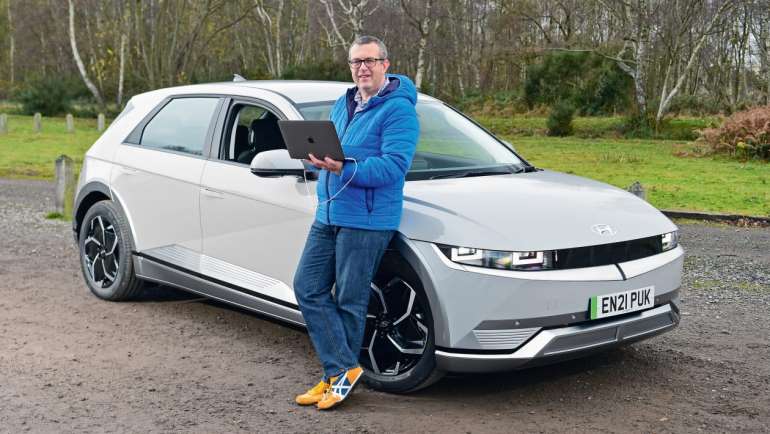 Our Car of the Year has made a solid start. Real-world range in cold weather isn’t quite as high as we’d like, but the spacious cabin, terrific on-board tech and ride comfort are making it a pleasure to use.

It's always an exciting time when a new long-termer arrives on the Auto Express test fleet – and there’s definitely a further frisson of anticipation when the car in question is one of our award winners. So expectations are high for the latest model on my driveway: the Hyundai Ioniq 5, our reigning overall Car of the Year.

This is, it must be said, not the first pure-electric Hyundai that has ended up outside my house for a prolonged period. A few years ago I ran a Kona Electric, and I came away mightily impressed by the amount of real-world range it offered for the cash.

The Ioniq 5 is proof, however, of how far Hyundai has come in a short time. First, the design is far more dramatic than the fairly anonymous Kona’s (and our example was in Kermit green, a far more lurid shade than our Ioniq’s gloss silver). The Ioniq 5 is bigger than it looks in pictures (you have my ample girth in the pic above to give you a sense of scale), but its 8-bit, eighties-influenced styling has really split opinion – a major feat for a firm that used to struggle to get noticed.

Beyond the looks, though, the technology on board the Ioniq 5 is so advanced that it feels like the whole project has jumped about three generations. To recap, the Hyundai sits on E-GMP, Hyundai’s first bespoke electric-vehicle platform. That means the polarising looks wrap around a cabin that offers levels of space usually found in the class above.

You can buy the Ioniq 5 with several different combinations of battery and powertrain, but we’ve steered clear of the most powerful option – the four-wheel-drive, twin-motor version, and the top trim level. This isn’t a bad combo – in fact, it was good enough to earn those New Car Awards gongs last summer – but the range has expanded since then and we feel the sweet spot is mid-spec Premium, with just a single rear motor and the large battery.

So that’s what we’ve gone for: 215bhp, 73kWh, a range that should be north of 300 miles, and a price tag just shy of £42,000. Should you exhaust that battery, the E-GMP platform also incorporates 800V electrics – the kind of technology usually reserved for EVs costing twice as much – so if you find a fast enough charger, the Ioniq 5 is capable of swallowing juice at a rate of more than 200kW. Getting from empty to 80 per cent capacity can take as little as 18 minutes; I’ve discovered I can barely drink a service-station cup of coffee in that time.

Another standout feature that we’re looking forward to trying – beyond proving a point in front of our snapper’s lens in the photos here – is the car’s ability to give out power, as well as taking it.

A three-pin socket mounted on the front of the rear seats allows you to charge or run all manner of devices, including an Auto Express-issue MacBook Pro laptop – but perhaps more significantly, the charging port itself is able to dispense electricity as well as receive it. That means the Ioniq 5 can, in theory, give another EV a potentially vital slug of juice to get it to a proper charging point in an emergency.

Early impressions? The Hyundai is as comfortable around town as we remember it from our awards judging, with a slightly wallowy ride once you get up to speed.

It’s not remotely involving on a twisty road, but I’m happy with that compromise in the name of outright comfort. Sure enough, this rear-wheel-drive version doesn’t feel “EV rapid” but it’s certainly quick enough when pulling away from rest, and perfectly content at a motorway cruise.

Negatives? The foot-operated electric boot mechanism is bit too keen for its own good, so it has a tendency to lift the tailgate when you’re merely approaching the rear of the vehicle. It’s configurable via the car’s on-screen menu, thankfully.

Oh, and the real-world range is some way short of WLTP figures so far – but then, the car turned up perfectly in sync with the UK’s traditional two-week winter cold snap. We’re already enjoying the model’s pre-conditioning function on icy mornings, and remain optimistic it can claw back range as conditions improve.