2022 Hyundai Kona Electric Review: A Likable, Livable EV — if You Can Find It 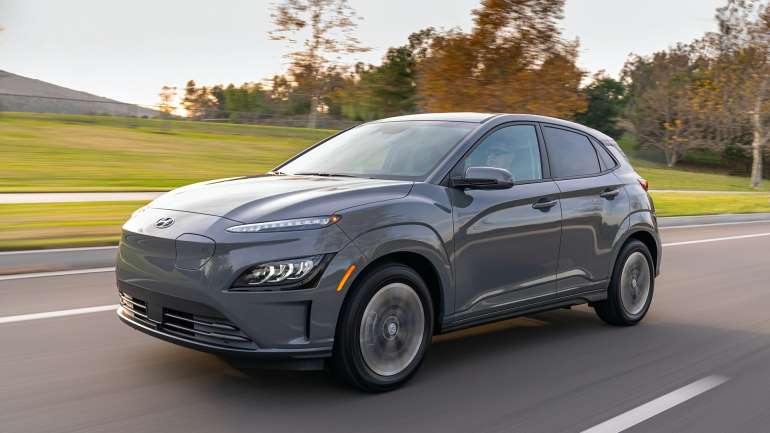 The verdict: Some electric vehicles are just weird: weird range, weird controls — but not the 2022 Hyundai Kona Electric. The electric version of Hyundai’s tiny SUV has a lot in common with the regular model, which is part of why it works so well.

Versus the competition: The Kona Electric delivers good range at a competitive price, along with pleasant road manners and easy controls — unlike some other EVs. Where it falls short is in availability: In addition to supply chain issues affecting the entire market, it’s not even offered nationwide.

The Kona Electric was the automaker’s first all-electric SUV when it launched for model-year 2019; for 2022, it has a lightly freshened face and a larger standard.The Kona goes up against other small electric SUVs, such as the Chevrolet Bolt EUV and Volkswagen ID.4. It’s also likely to be cross-shopped against the Nissan Leaf electric hatchback.

Like the gas-powered Kona, which I cover in a separate review linked above, there’s a lot to like about the electric version of this plucky subcompact SUV, from its zippy driving manners and no-nonsense controls to ample safety features and a focus on value. There are, however, some obvious differences between the gas-powered version and the EV. Here are three big ones.

The biggest difference between the conventional Kona and the EV is obviously under the hood, and a hint about that comes from its face: The EV’s front sports a smoother, more streamlined design than the regular model, and there’s a charge panel that’s oddly off-center above a minimized grille.

The Kona Electric gets power from a 64-kilowatt-hour battery pack and single electric motor making 201 horsepower and 291 pounds-feet of torque. It comes only with front-wheel drive; the VW ID.4 has standard rear-wheel drive and optional all-wheel drive.

Power comes on fast and smooth; near-instant torque makes for great pep off the line and gives the Kona some zip around town. The EV feels much quicker than the regular Kona, which already was decently peppy when equipped with the more powerful of its two available engines, a turbocharged 1.6-liter four-cylinder. For even more zip, pop the Kona Electric into Sport mode, which increases responsiveness for a more aggressive feel. Eco mode plays it safe, which translates to dulled responsiveness, and Normal mode splits the difference.

All three modes have a big impact on how much energy the car uses, which in turn impacts its range. The EPA estimates the Kona Electric is good for 258 miles of range, which is competitive with other small EV estimates, such as the Chevrolet Bolt EUV’s 247 miles of range and the VW ID.4’s 280 miles in the base trim level with rear-wheel drive. The base front-drive-only Nissan Leaf is good for only 149 miles of range, while the Leaf Plus is rated up to 215 miles thanks to a larger battery.

With a 7.2-kilowatt onboard charger, the Kona can achieve a full battery charge from 10% in about nine hours with a Level 2 charger rated 32 amps or higher (the setup I have at home). Hyundai says it can reach an 80% charge from 10% in approximately 47 minutes using a public DC fast charger, which I did not try.

The Kona Electric is an efficient vehicle, which pays off both in cost of operation and charging speed, replenishing miles of range faster than some competitors. It recently earned the No. 4 spot on our list of the top 10 most efficient electric vehicles with a rating of 28 kWh per 100 miles. The Bolt EUV took seventh place with 29 kWh per 100 miles, while the ID.4 and Leaf didn’t crack the top 10.

I tested the Kona in frigid temps and discovered that its range is relative — as is the case with all EVs due in part to extra energy demands from cabin heat and goodies like heated steering wheels and seats; use these less and you’ll get more range. With the Kona Electric’s Sport, Normal and Eco mode settings, you can customize climate control usage for each mode to balance your needs with the car’s range. Because I like all the cozy things, my range was always lower than the 258-mile max that’s available under just-right conditions. The good news is that the car’s range gauge seemed pretty accurate during my trips, and even though I always saw numbers less than the EPA-estimated range, the Kona still had plenty of juice for long trips.

Other cold-weather-related factors play a part in the car’s range, as well. Cold weather limits how much energy is recaptured through the EV’s regenerative braking system, and lower temps impact how long it takes to bring the vehicle’s battery up to a full charge, so plan accordingly. The Kona does have an available battery warmer system to help prevent excessively long battery-charging intervals in cold weather: In a selectable Winter mode, the battery warmer can minimize battery-power loss due to low temperatures, ensuring quicker acceleration and charging by keeping the battery warm. There’s also an available app that helps manage charging and lets you control some vehicle systems remotely.

You’ll also feel the impact of the Kona Electric’s battery in the backseat, where the pack’s placement under the floor eats into backseat space and impacts comfort. The floor is elevated compared with the regular model, requiring a more awkward knees-up seating position. Where the gas-powered Kona has 35.2 inches of legroom, the Kona Electric has only 33.4 inches, and even those numbers don’t adequately reflect just how much usable legroom you forfeit in the EV. At least front legroom and cargo space dimensions are the same.

2. Breaking in the Brakes

The EV’s driving experience is pretty different from the regular Kona’s in a couple of ways — not bad, just different. Where the gas-powered version sounds gruff and loud, the EV is quiet, making subtle whirring noises similar to what you’ll hear in other EVs. The EV also rides a bit firmer; it’s not uncomfortable, but it doesn’t absorb bumps as well as the gas version. This might be related to its low-rolling-resistance tires , which have been known to impact ride (though the technology is improving). For what it’s worth, overly firm or poorly sorted ride quality is a frequent complaint of ours in affordable EVs. 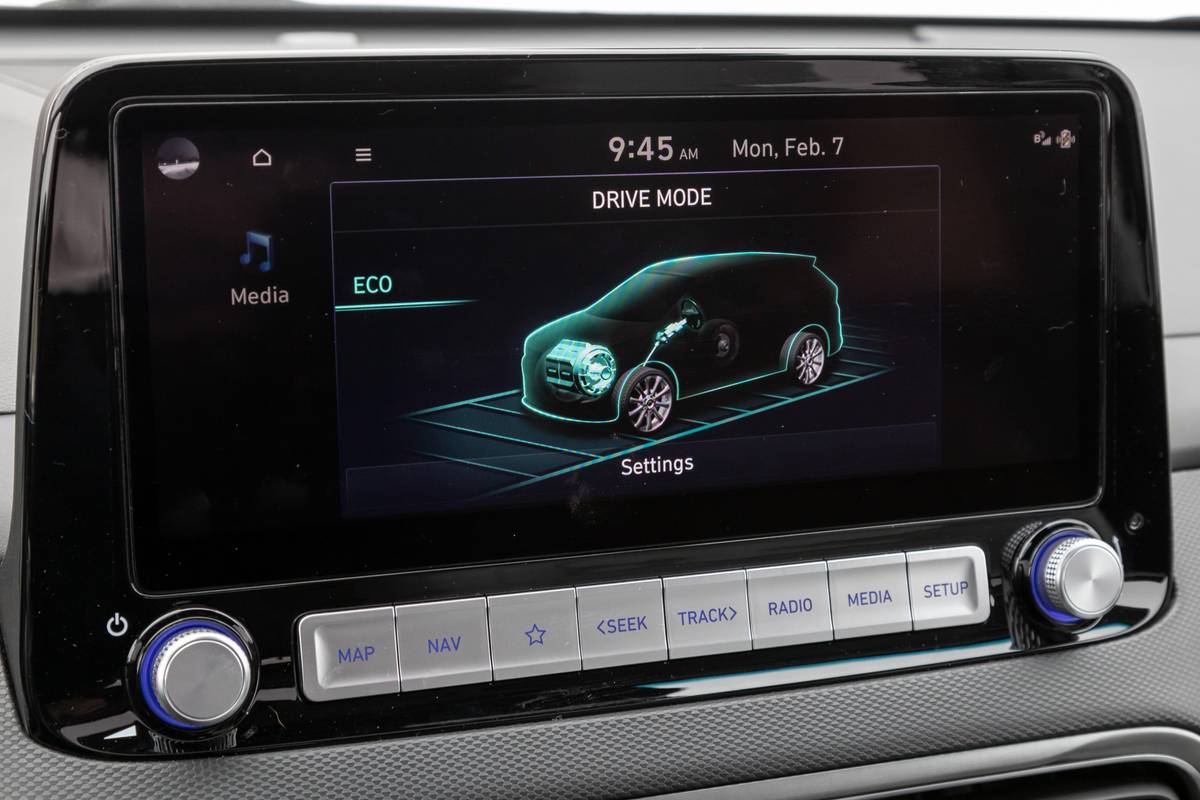 The electric Kona also has a very different brake feel that’s mostly typical of hybrid and electric cars, but with a twist: The Hyundai’s regenerative braking works to capture lost energy and return it to the battery to boost efficiency via an adjustable, customizable system.

In each of the car’s Sport, Eco and Normal modes, you can dial up the strength of the regen system — aka the degree to which the Kona decelerates when you lift off the accelerator pedal. For example, in Sport mode, I set it to Level 1, so the system reacted like relatively normal brakes, with a firm, responsive pedal.

I set it to Level 3 in Eco mode, which is the highest setting, and thus the most unnatural-feeling one — but also the one that saves the most energy. At this level, you feel the car start to slow down dramatically when you remove your foot from the accelerator pedal, which led to a lot of lurching until I got the hang of it. Even in Level 3, however, it doesn’t quite slow down to a stop as can happen in one-pedal driving modes in some other EVs; the Nissan Leaf’s one-pedal system, for example, is easy to get used to and can be helpful in traffic. In the Kona, if you want the car to brake all the way to a stop, you can enable a one-pedal mode by holding down a steering-wheel paddle until the car stops, but it felt more like a gimmick than a useful way to drive.

I ended up splitting the difference and got comfortable in Level 2, which still saves braking energy but doesn’t feel as weird as Level 3. One other minor annoyance: Changing the brake settings seemed to require digging through a few screens and menus. Access to these settings should be more straightforward, and while I eventually learned you can move between the levels via that steering-wheel paddle, it wasn’t clear until I dug into the owner’s manual.

3. What It Costs and Where You Can Get It

The last big difference between the conventional Kona and the electric one is cost and availability. The 2022 Hyundai Kona Electric is available in only two trims, SEL and Limited, starting around $35,000 (all prices include destination) — over $10,000 more than a gas-powered Kona SEL. That’s steep, but the Kona Electric is still eligible for a full $7,500 federal tax credit, which helps remove some of the sting.

There’s one more caveat, and it’s a big one — especially given the inventory shortages shoppers already face nationwide: The Kona Electric is currently sold only in states that require increasing sales of zero-emissions vehicles. As of this writing, those states include California, Colorado, Connecticut, Maine, Maryland, Massachusetts, New Jersey, New York, Oregon, Rhode Island, Vermont and Washington.

With real-world-livable range, likable road manners and a competitive price, the Kona Electric is a compelling option, and one of the least weird EVs out there — if you can find one.