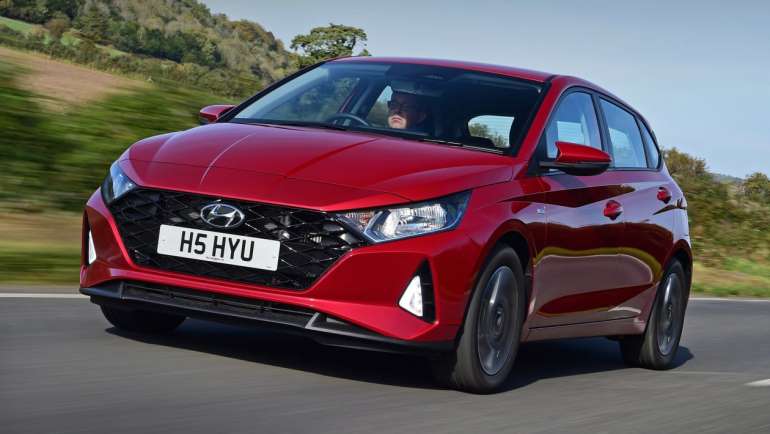 The supermini class is one of the most hotly contested in Europe but that's not stopped the Hyundai i20 winning praise in the past. The previous model was always a sensible choice, thanks to its reliability, practicality and low running costs. The new version continues this theme but is more fun to drive too.

That's important in a class that contains not only the Ford Fiesta but the latest Renault Clio, which is also better to drive than before. The latest i20 has been developed with a hot ‘N’ version in mind, and feels firmer as a result.

Just one engine is available at launch, so it's a good job it’s likely to be the pick of the range when others arrive anyway. The 1.0-litre three-cylinder turbo has 99bhp, which is peppy enough and feels smooth and refined. It's also fitted with mild-hybrid tech that recoups energy as the car slows down, boosting efficiency by powering the car's systems and bolstering acceleration.

The result is a competitive 54.3mpg fuel consumption figure with 118g/km of CO2, which is also helped by an innovative system that can decouple drive from the gearbox when you come off the throttle, allowing the car to 'coast' with the engine temporarily switched off. If that sounds jarring, know that the i20 has one of the smoothest mild-hybrid setups we've tried so far.

The i20's interior is a bit of a mixed bag but there’s more good than bad. On the positive side, there's lots of tech and space. Hyundai has fitted a new eight-inch touchscreen to the left of the instrument binnacle, with clear graphics, and there's a 10.25-inch digital instrument panel. Features like air-conditioning, Android Auto and Apple CarPlay also come as standard in the entry-level SE Connect trim. There are almost no options available but Premium trim adds LED lights, folding mirrors, auto wipers, heated front seats and even a heated steering wheel, along with 17-inch alloy wheels. Ultimate gets big-car features like keyless entry, a Bose sound system and contrasting roof colour.

What's slightly disappointing is some of the interior materials, because while the swooshes across the dashboard look quite good, there's a lot of hard and scratchy plastic lower down in the car. There's more chrome or gloss-black trim in the Fiesta and Clio, and even cheaper plastics tend to be patterned to make them look more attractive.

There are no worries about space, with enough room in the back for two six-foot adults, which is about as much as you can ask for in a supermini. Its 352-litre boot is also plenty big enough for a car in this class, easily beating the 311 litres of the Fiesta. Hyundai has also fitted the i20 with plenty of safety kit, clearly wanting to better the four-star result of the outgoing i20. Its 'SafetySense' suite of technology includes active safety kit like autonomous emergency braking to help mitigate collisions.

There's just one engine available in the Hyundai i20 initially, so you won't have to worry about scouring the brochure - or this review for that matter - to decide which to pick. Instead, it's a question of whether the Hyundai stands up to its rivals, of which there are many.

The 1.0-litre turbocharged petrol engine benefits from a 48-volt mild-hybrid setup, which works silently in the background harvesting energy and storing it in a small battery pack. This can be used to power the car's systems, improve the stop-and-start system and give acceleration a helping hand, taking some strain off the engine and boosting fuel-efficiency.

Clever fuel-saving tech doesn't end there because the gearbox can also decouple from the engine when your foot is off the accelerator, increasing fuel-efficiency by 3-4% by itself. Hyundai has also gone to significant efforts to make the i20 lighter, and together, all these measures give it an official figure of up to 55.4mpg - an increase from 48mpg in the old model.

CO2 emissions of 118g/km ensure it won't break the bank for company-car drivers paying Benefit-in-Kind tax, and it costs £150 a year in VED.

Insurance groups
Insurance rankings for the latest Hyundai i20 haven't been confirmed yet but its affordability, reliability and small petrol engine should ensure it's affordable to cover for most drivers. The outgoing model spanned groups six to 15 out of 50.

Warranty
Hyundai scores here because while its five-year/unlimited-mileage warranty isn't quite class-leading (some rivals offer seven years of cover), we think it will satisfy most buyers while exceeding the length of most lease deals. It also makes the three years of cover offered by the likes of Ford and Volkswagen look rather short.

Servicing
Hyundai offers fixed-price servicing plans that are well worth considering as part of the deal. Costing around £500 for three years and £1,000 for five years, they cover all routine maintenance and can be paid monthly, making the cost of ownership more predictable.

Anyone expecting the i20 to serve up a soft, disconnected driving experience clearly hasn't been behind the wheel of a recent Hyundai. The Korean cars are now some of the best to drive in their respective classes, and the i20 has impressive body control.

This does mean the suspension is reasonably firm but the chassis works well enough to smooth out most road imperfections without losing its cool. In versions with 16-inch alloy wheels, speed bumps are also dealt with in a nicely cushioned manner, but higher trims with 17-inch wheels may be a little less comfortable.

The 1.0-litre, three-cylinder turbo petrol engine is a real highlight, spinning smoothly up to 3,500rpm, at which point it's best to change into the next gear thanks to its handy supply of pulling power. Thanks in part to the mild-hybrid assistance, it feels willing from barely above tickover, making it easy and relaxing to drive.

Unlike some three-cylinder engines, there's no shaking or vibration, even when the engine cuts out and starts back up as you're driving along to help save fuel. It's one of the smoothest mild-hybrid systems we've tried so far.

The interior design has been completely overhauled, with a look inspired by executive models that includes a large screen perched above the dashboard, adjacent to the instrument binnacle. There's a serious amount of kit, and everything feels well screwed together, but perceived material quality appears lacking compared with the Ford Fiesta and especially the Renault Clio - our current class favourite.

Get behind the wheel, and the i20 feels modern and functional, with two 10.25-inch screens on higher trims - one above the dashboard and one inside the instrument cluster. Both are mounted near the base of the windscreen, making them easy to check at a glance. The main screen comes with Apple CarPlay and Android Auto, while the instruments change colour if you change the car's driving mode.

There are rotary dials for the climate control, which are easy and fast to use, and the dashboard has accents that span outwards from the air vents. The only disappointment is the look and feel of some materials; the dashboard and lower sections of the interior are swathed in a selection of black and grey plastics that aren’t very tactile. In the Fiesta and Clio, there are grains and patterns, and some chrome and gloss-black finishes.

Even the entry-level SE Connect trim boasts a reasonable level of equipment but costing from around £18,500 it's no bargain basement supermini - a Renault Clio in Iconic trim costs under £17,000. An eight-inch touchscreen and 10.25-inch digital instrument panel is standard, however (the Iconic model of the Clio has analogue gauges), and there’s cruise control, air-conditioning, Apple CarPlay and Android Auto.

The range-topping Ultimate trim (for around £1,500 more) looks more stylish thanks to a contrasting roof, while added tech includes keyless entry and wireless smartphone charging.

Hyundai tends to shy away from offering lots of options, instead nudging customers towards the trim level with all the equipment they'll need. One of the few things you can splash out on is a metallic or pearlescent paint finish, costing £550. This is a similar price to most rivals, but the SEAT Ibiza does come with free metallic paint.

Equipment and practicality have been two feathers in the i20's cap throughout its history, and that remains the case here. It has a big boot and the interior is large enough for couples, or families with a child at a push.

Most vehicles have grown in recent years, and when you consider that four six-foot tall adults can sit fairly comfortably in the i20, you could argue superminis can't really get much bigger without treading on the toes of family cars.

The impressive rear legroom will also come in very handy for parents with a bulky child seat, making it possible to fit it into the ISOFIX mounting points without having to slide the front seats all the way forwards.

Sitting vacant behind the back seats, there's 352 litres of luggage space waiting to be filled up. That's very close to what you get in a Ford Focus (375 litres) or Volkswagen Golf (380 litres), while also very competitive in the supermini crowd. The Ford Fiesta is smaller with 311 litres, the Volkswagen Polo has 351 litres and the Renault Clio is bigger, with up to 391 litres in the petrol version.

Hyundai has a good reputation for building trustworthy cars

This is another area where the Hyundai scores strongly, thanks to a good reputation for reliability and safety, so we're hoping the i20 can top the four-star safety rating of its predecessor.

The outgoing Hyundai i20 came 68th out of the top 75 cars in our 2020 Driver Power survey, which isn't a bad result for a car just about to go out of production. Most impressively, just 4.2% of owners reported a fault in the first year - a lower proportion than the 17.3% of Ford Fiesta owners.

Hyundai isn't happy to settle for a sub-standard Euro NCAP safety rating again, giving the i20 one of the longest lists of active and passive safety equipment in the industry. Called Hyundai 'SmartSense', it includes intelligent speed-limit assistance, lane-keeping assist, autonomous emergency braking and automatic high-beam activation for the headlights. Lane-follow assist is added if you step up to Premium trim, while the Ultimate version adds blind-spot monitoring and cyclist detection.