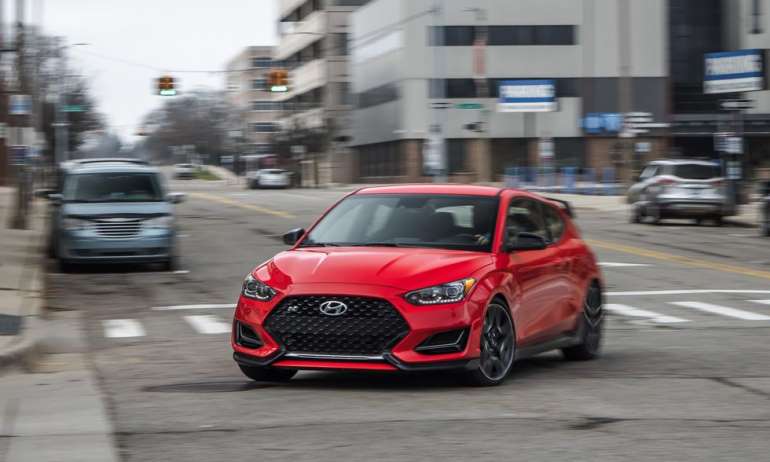 Hyundai nailed the hot-hatchback formula when it released the Veloster N for the 2019 model year. As a rambunctious salute to bargain performance, it initially offered as much as 275 horsepower and a six-speed manual transmission for less than $30,000. Its rowdy active exhaust emits all the right snorts and pops. And its planted, highly adjustable chassis makes for great fun on pretty much any road or racetrack. With our long-term test car continuing to entertain us even as it approaches 40,000 miles, the news that Hyundai would be upping the fiery Veloster's base price and adding a few refinements for its third year in production was cause for some initial concern. Fortunately, those updates resulted in an even more desirable sport compact. 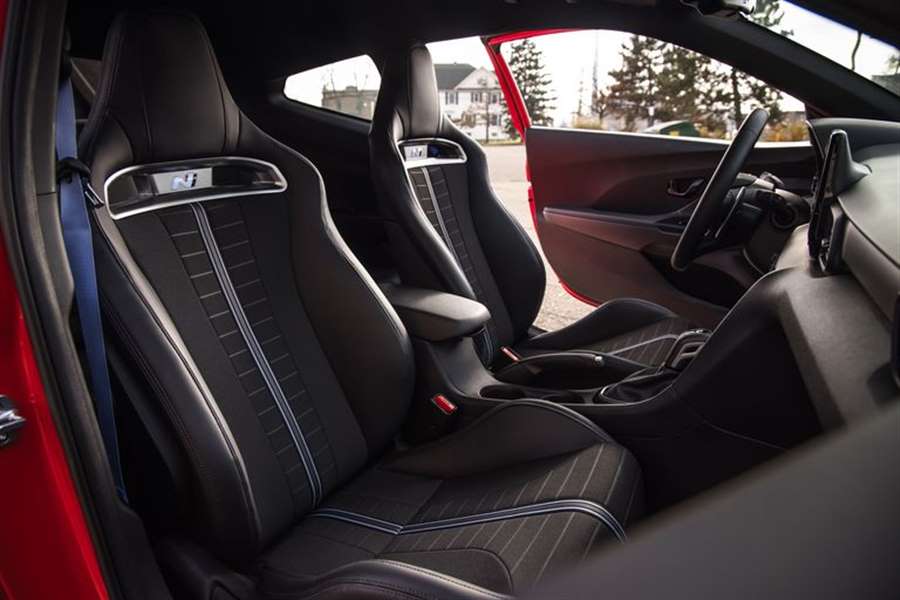 First, that change to the 2021 Veloster N's base price: It's now $33,245, which is $4650 more than it was last year. However, that sum does include more standard equipment, notably the previously optional $2100 Performance package that should have been standard from day one. The highlight of that upgrade is a 25-hp boost for the turbocharged 2.0-liter inline-four (for a total of 275), but it also adds an electronically controlled limited-slip differential, larger brake rotors, an active exhaust system, and 19-inch wheels with Pirelli P Zero PZ4 summer tires, which replace the standard 18-inch Michelin Pilot Super Sports. 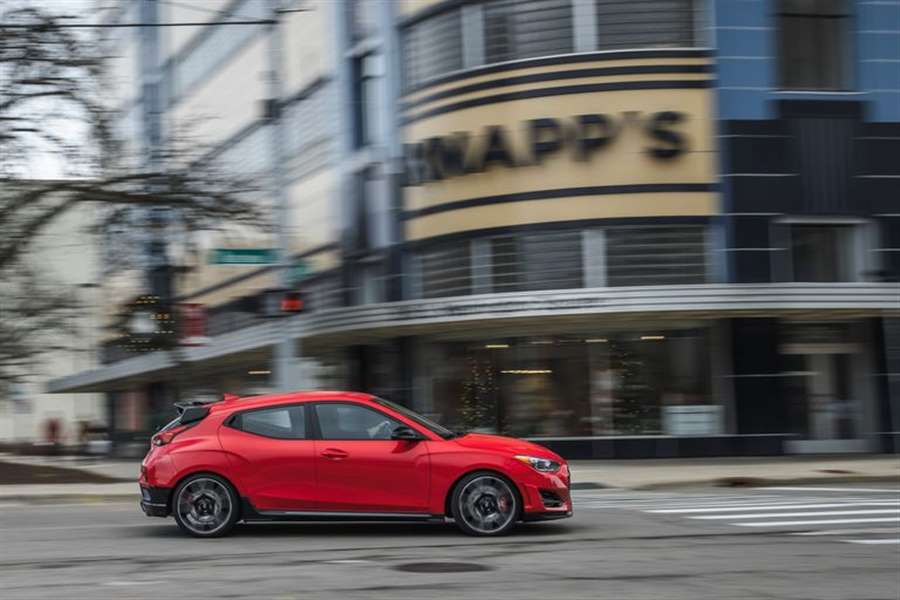 The second major update is the addition of an optional ($1500) eight-speed dual-clutch automatic transmission (DCT). While we'll argue that a stick shift and three pedals are still best for maximizing the Veloster N's playfulness, there's no denying the DCT's quickness. Our test car shot to 60 mph in 4.8 seconds and covered the quarter-mile in 13.4 seconds at 105 mph—handy improvements over the best 5.2- and 13.8-second runs we've recorded for a manual Veloster N. More important, both of the DCT's times are a tenth of a second quicker than the best efforts we've clocked for its chief rival, the manual-only Honda Civic Type R, although the 306-hp Honda does post a 3-mph faster trap speed at the end of the quarter. In two-pedal form, the Veloster N is now the quickest front-driver we've ever tested and one of the cheapest ways to gain access to the sub-five-second-to-60-mph club. 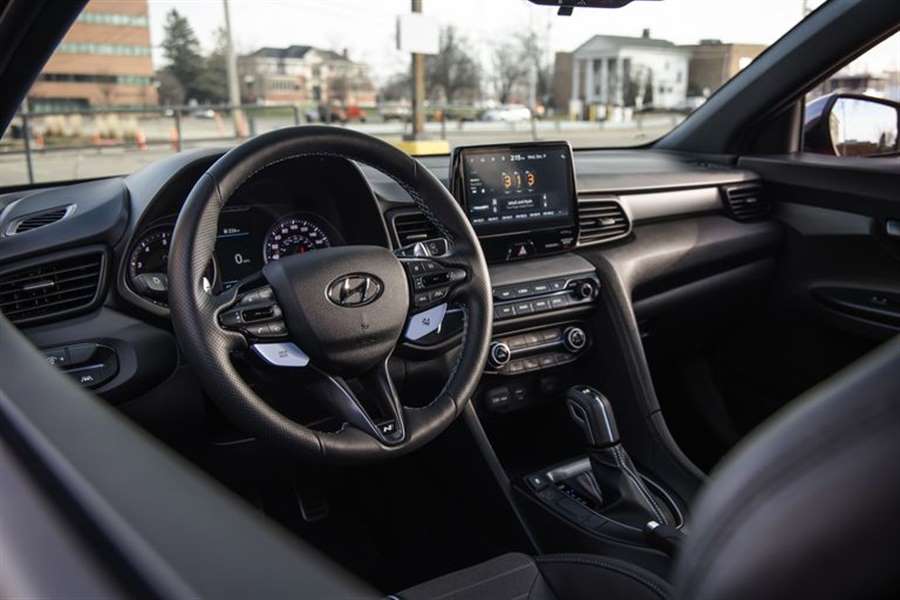 To summon the high-rpm clutch drop required for that Civic-beating takeoff, you'll need to familiarize yourself with the Custom drive mode display on the Veloster's 8.0-inch central touchscreen. Given the Veloster N's many chassis, engine, exhaust, and drivetrain settings, there's no ideal way to present all the choices. The previous tile layout required two pages, which Hyundai condensed to a single page by moving to a spider graph. The new readout looks sharp, but manipulating the intricate toggles while driving takes a steady hand. There are also preset combinations—Eco, Normal, Sport, and N Mode—if you don't require, say, loud exhaust paired with relaxed suspension. 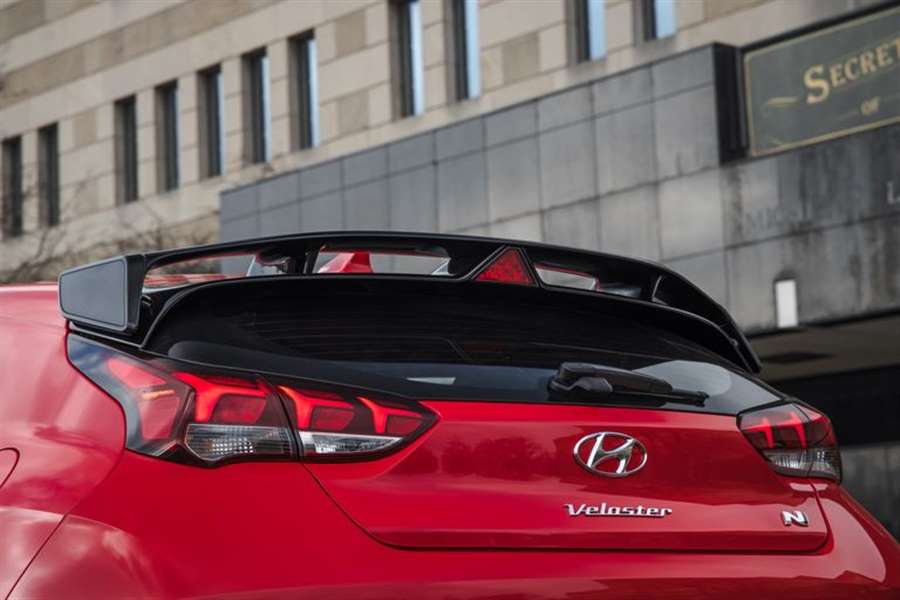 The launch-control tab is integrated into the spider graph's adjacent N Performance display. Once activated, you're given five minutes to set the launch rpm (in 100-rpm increments up to 3500 rpm), floor both pedals, and then release the brake. As the computers work the clutches, the Veloster N lunges forward on the edge of traction and fires off rapid-fire upshifts as long as you keep the accelerator pinned to the carpet. We'd prefer it if we could initiate the procedure by simply mashing both pedals in the sportier drive modes, and we found that the system needed a brief cooldown between repeated runs. But it is effective.

Designed in-house, the Veloster N's eight-speed DCT is a marked improvement over the Hyundai Group's previous dual-clutch boxes. Its gear changes aren't as quick as a Porsche PDK's, but it is snappy and smartly programmed. (And hey, we're talking about a car that costs the same as a few option packages on a 911 Turbo S.) Low-speed drivability is impressively smooth, lacking the jerky stumbles that on-off throttle applications can provoke in this type of transmission. Downshifts are quick and well timed. As a bonus, the automatic Veloster N gains an overboost feature called N Grin Shift, which engages the car's raciest drivetrain setting and increases the engine's torque output from 260 to 278 pound-feet for 20 seconds. But we often forgot about it because it's activated by a small, unassuming NGS button on the steering wheel that blends in with the rest of the controls.

In manual mode, the Veloster N's transmission will hold gears up to the engine's 6750-rpm fuel cutoff. Shifts can be cued up via paddles on the steering wheel or a console shift lever with a proper pull-to-upshift, push-to-downshift action. We found that this manual control came into play more often than usual when driving on the highway, as the Veloster N's eight-speed won't engage top gear in any drive mode more aggressive than Normal. At an 80-mph cruise, eighth gear equates to a relatively subdued 2000 rpm. Left to its computer brain, the transmission only goes to seventh gear in Sport (2500 rpm at 80 mph) and sixth in Sport+ (3100 rpm). For comparison, the manual Veloster N registers 2900 revs at 80 when in top gear.

At a steady 75 mph, the Veloster N DCT returned the same 30-mpg figure as the manual car on our 200-mile highway fuel-economy test. This is unimpressive given its extra ratios, yet better than what the EPA reckons: The automatic's federal estimates of 22 mpg combined, 20 city, and 27 highway all trail the manual's 25/22/28 ratings. Our test car averaged 18 mpg during its two weeks with us.

That reduced efficiency partially stems from the weight penalty incurred by the dual-clutch transmission. At 3186 pounds, our DCT test car weighed 96 pounds more than our manual long-termer, with the amount of mass over the front wheels increasing from 63.7 to 65.2 percent. Hyundai compensates for the altered front-to-rear balance by retuning the DCT model's springs and adaptive dampers. This maintains the car's excellent poise and body control but changes the ride quality. In Normal mode, the DCT car rides slightly firmer than the manual model, but in Sport+ mode it's more forgiving. Driven back to back, we still prefer the lighter six-speed car's softest setting for most situations, as it brings the best balance of ride comfort and chassis control. On Hyundai-spec 235/35R-19 Pirelli P Zero PZ4 summer tires, our DCT test car exhibited slightly more skidpad grip than the stick shift (0.99 g to 0.97) and took negligibly longer to stop from 70 mph (157 feet versus a best of 154).

Thankfully, transmission choice has no impact on the Veloster N's new standard performance seats. Highly supportive for hard driving yet surprisingly comfortable, these cloth and leatherette thrones are a huge improvement over the comparatively flat and plain-looking fabric chairs in our long-term car. Hyundai says each one is also four pounds lighter, but we're more impressed with how their sculpted design and the illuminated N logos on their backrests dress up the car's otherwise drab cabin.

That the new seats aren't heated is our only big gripe about the latest Veloster N. While that might sound like a trivial complaint, we drove the car in Michigan's frosty late fall. We thought far less about the car's new standard active-safety tech—lane-following and forward-collision assists, blind-spot and rear cross-traffic alerts, and driver attention monitor—than we did about the seat heaters and heated steering wheel that Hyundai makes available in other markets. The company says this split was to limit the cost and build complexity of models sold in the United States. But we imagine that discerning buyers of a more sophisticated and expensive Veloster N would like a say in their car's amenities. Count us among that group, even if we'd still chose the manual car and its inherently greater involvement over the quick new DCT.