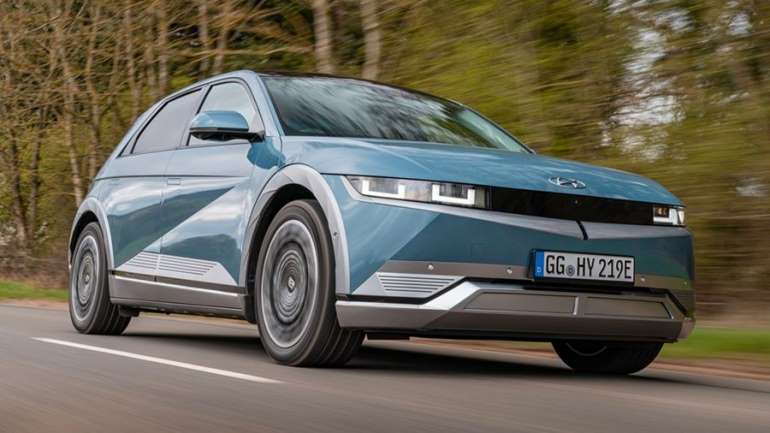 It's clear that Hyundai's mantra must be 'speak softly and carry a big stick.' It just must be. Being among quiet pioneers of family-friendly electric cars already with the original Ioniq and Kona, the brand is about to smack us across the chops with a whole new range of EVs under the Ioniq sub-brand, starting with this: the Ioniq 5.

We've driven a near-finished prototype of for our first whack. Has Hyundai beaten VW at its new game?

What a looker!
Hyundai says the look has been inspired by the Pony Coupe of the 70s but, unlike so many car brands looking to its past to guide its future, design-wise, this is no slavish pastiche. It's an eye-popping piece of design, shaped as a family hatch, with pixelated lighting front and rear and super-crisp lines. 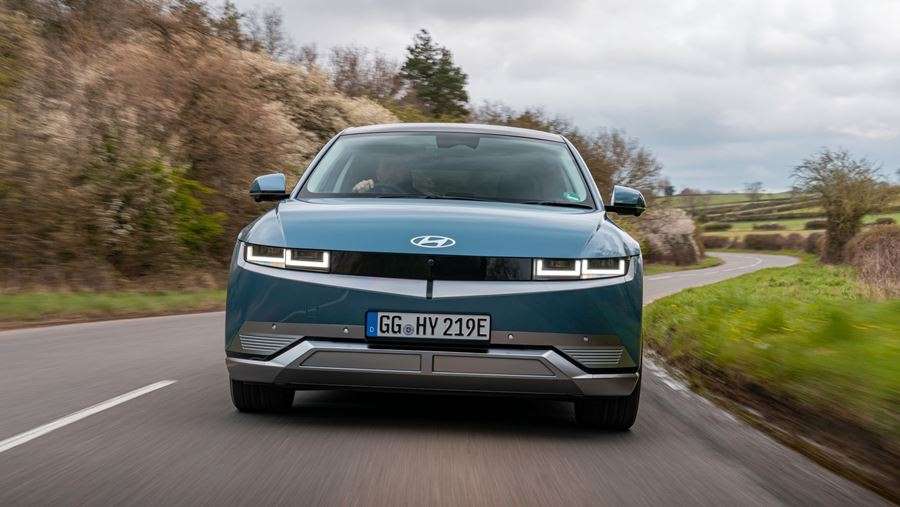 Interestingly, though, the Ioniq 5's dimensions are much larger than you think. This design masterstroke actually hides the car's size: it's actually longer than a VW ID.4 both physically and in terms of its wheelbase and about 40mm taller than a Jaguar i-Pace.

Speaking of the i-Pace and ID range, we conveniently managed to park next to Jag's EV and an ID.3 – both look instantly dated compared to this.

Inside, the cockpit takes full advantage of the e-GMP platform that lies underneath. A flat floor means no fixed centre tunnel, with a movable centre console that provides cupholders, cubbies and a wireless phone charger. You're also greeted by thick padded seats, two massive screens and a kitsch two-spoke wheel like a Honda E. 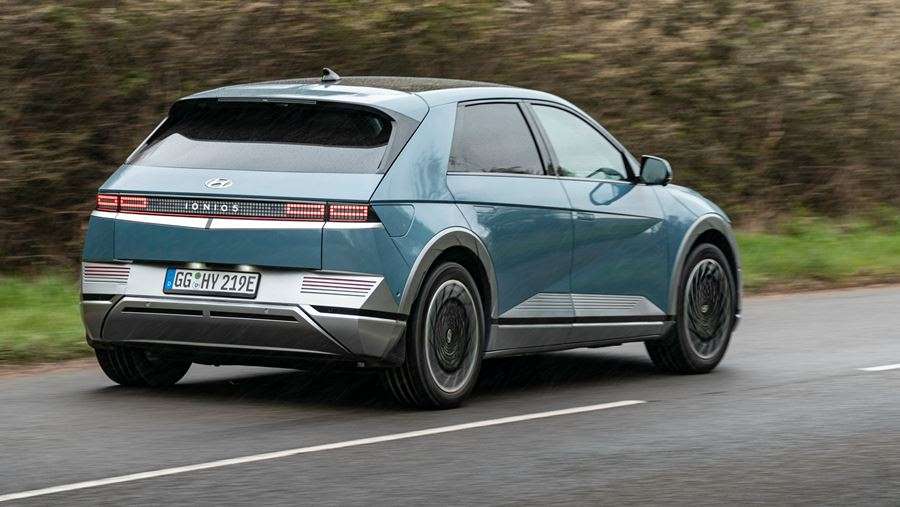 But Hyundai hasn't gone tech overload in here like Mercedes, or ultra-minimalist like a Tesla Model 3 – there's a balance between large, useful screens, touch panels and physical switchgear and solid materials on all your regular touch points. The shift stalk, for example, is on the steering column, with a chunky twist action and the door inlays – complete with eco-friendly paper inserts – all feel solid with a tactile thunk when you pull the door handles.

Space is impressive, too. The cabin itself feels huge once you're inside, with loads of room for rear passengers, too. The rear bench can slide forward and back and, even with a 6ft 2in driver like myself at the wheel, there's tonnes of legroom. The boot, however, is rather shallow, but has depth end to end, and properly usable width. You don't even need to store your cables here – there's a handy storage box under the bonnet for that. 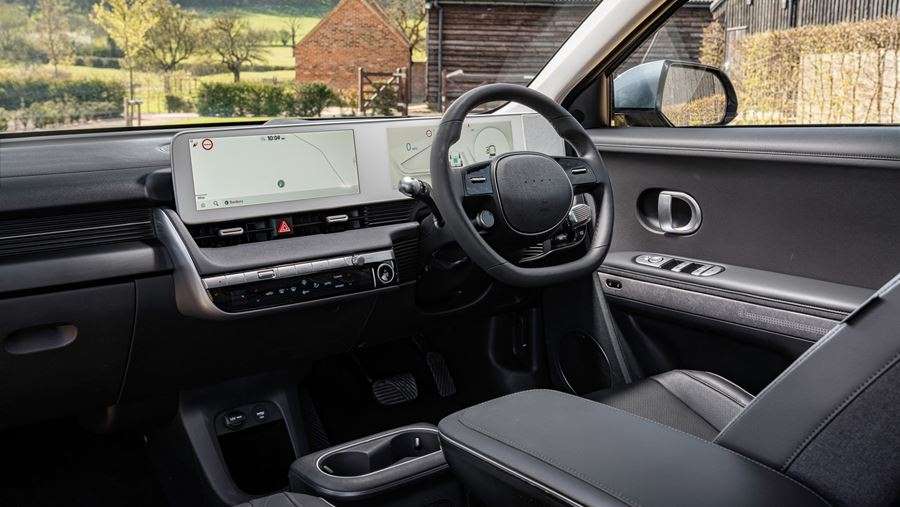 Any clever technology on the Ioniq 5?
The platform, for a start. The new e-GMP platform will underpin every new Ioniq sub-brand model from Hyundai along with Kia's new EV range starting with the EV6. Rear- and all-wheel drive powertrains are offered, with the Ioniq 5 giving you a choice of a standard range 58kWh or long-range 72.6kWh battery packs. And, along with a three-pin plug socket in the car, there's 'vehicle to load' – the ability to use the car as a rolling power bank, allowing you to plug in (via an adaptor on the charging port plug) almost anything externally, like a lawn mower, e-scooter or even another EV.

It's also as clever as a Taycan, allowing for both 400 or 800-volt charging, meaning (on the fastest available 350kW chargers, of course) the ability to zap from 10 to 80 per cent charge in just 18 minutes. Hyundai claims 296 miles in the Ioniq's thriftiest setting (larger battery, rear-wheel drive), but you can expect an ID.3 rivalling 260-plus from the all-wheel drive variant. 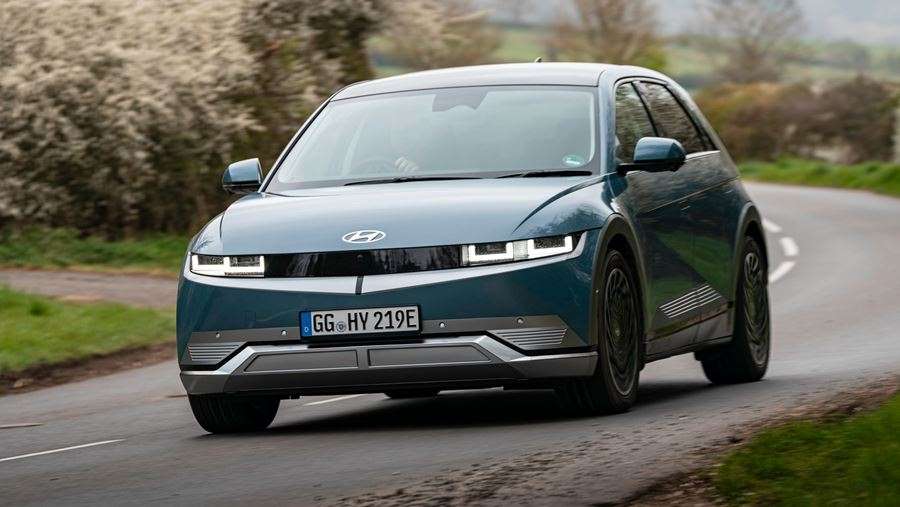 Live in a sunny area? Of course you don't, not in the UK at least, but you can spec a solar cell roof (after the Ioniq's initial launch) that aids the batteries: 'The solar roof has a charging capacity of 205W, and in an environment that is sunny we did some experiments and found that it could add 1200 miles of range per year, or about three miles per day,' Ioniq 5 project manager, Askin Kahraman, told us, 'The roof will also help the 12V battery so the car doesn't discharge completely.'

Then there's all the available tech on board. Along with Level 2.5 semi-autonomous driving tech, you can have Hyundai's Blind Spot View Monitor (that shows you the view of the door mirror camera when you flick the indicator), an augmented-reality head-up display and front seats that recline with leg supports like a living room La-Z-Boy. 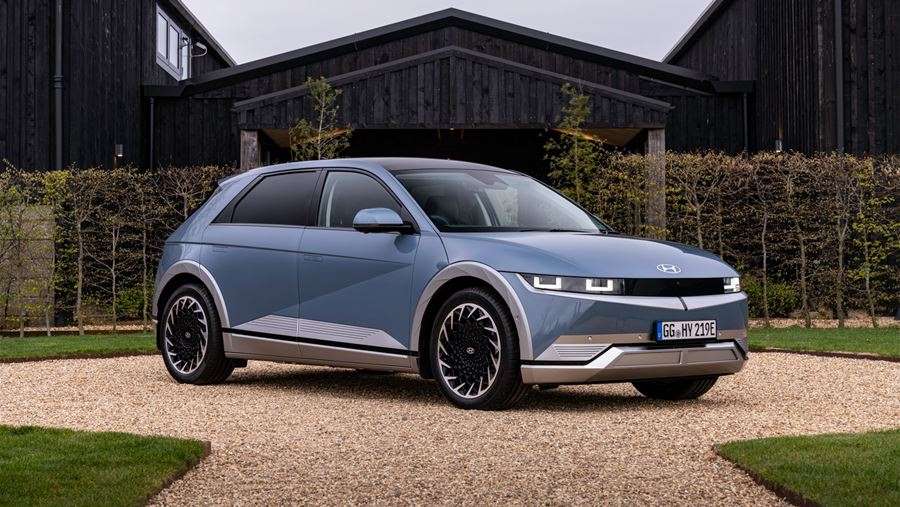 Our car was fully trimmed with every frippery you could ask for, implying that it was one of the limited-run 'Project 45' versions, at £48k. On top of all the tech that gives you, it also means your Ioniq 5 comes with the bigger 72.6kWh battery and all-wheel drive. As for lower trims, we expect it to follow the same trim structure as Hyundai's other models: SE Connect, Premium and Ultimate, with the cheapest models circling the £39,000 mark.

Let's drive it!
Walk on up to it and flush doorhandles pop out, ready for the drive ahead. Given the front seat's reclining nature, the whole seat angles backward if you want thigh support – rather than just the front end of the base – and the wheel adjusts for plentiful reach and rake.

Once you're rolling, the 5's interesting details don't instantly reveal themselves – it feels entirely standard fare for a family EV – quiet, inoffensive and smooth when you're nipping around town. And properly quick, just like an EV with so much torque should be; Eco mode dulls the throttle while, at the other end of the drive mode scale, the dials glare red in Sport and the throttle response is incredible. And this simply won't be the most powerful version of the E-GMP platform, either. Kia, for example, has already shown off a supercar-baiting EV6 GT, so it's not beyond the realms of possibility that Hyundai could make an Ioniq N. 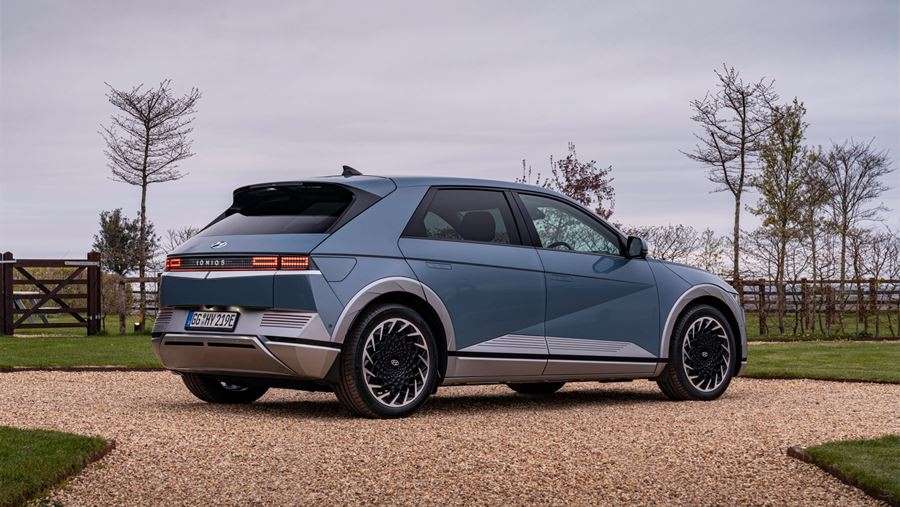 Then you start to notice the finer points after the miles roll on.

The steering, for example, is live-wire alert and well-weighted – no dead-spots off-centre and tremendously fluid when you wind the lock off after a turn. The turning circle is tight, too; not London Taxi or Honda E tight, but not far off. Then there's the brakes. It's almost an expectation for an electric car to have a soggy brake pedal and inconsistent feel when you apply some pressure due to regenerative braking (of which Hyundai has four steps, plus a one-pedal mode), but not here. Plenty of solid, accurate feel regardless of regeneration level.

You can really have fun with this car on a back road – something not often said this side of a Taycan. Adding up the whumping torque, sharp steering and feelsome brakes is already plenty good enough, but there's real balance to the chassis, too. This doesn't feel leaden or recalcitrant when you want some zippy thrills going the fun way home. Yes, there's a touch of body roll, but the way the suspension handles the Ioniq's weight is really something to be commended – it's a hoot.

We even got some time on the motorway. Hyundai told us that not all of the production-spec soundproofing is on this prototype but, if that's the case, I've driven plenty of family in-production family cars (including those of premium manufacturers like Audi) that riding on 20-inch wheels that have worse NVH refinement. Tyre noise is well within an acceptable level and wind noise is minor. Couple this with balanced ride quality – not too jittery, but not water bed wallowy either – and it's a very promising position to be in.

First impressions: Hyundai Ioniq 5
What an impressive machine. We can't wait to try a production-spec one but, even in this prototype, the Ioniq 5 brings such a breadth of abilities that other EVs can only dream of. Show-stopping looks, a thoroughly usable and appealing interior, and sharp dynamics that are rare to find in a heavy family EV.

Convinced by VW's ID.3? Try one of these first.