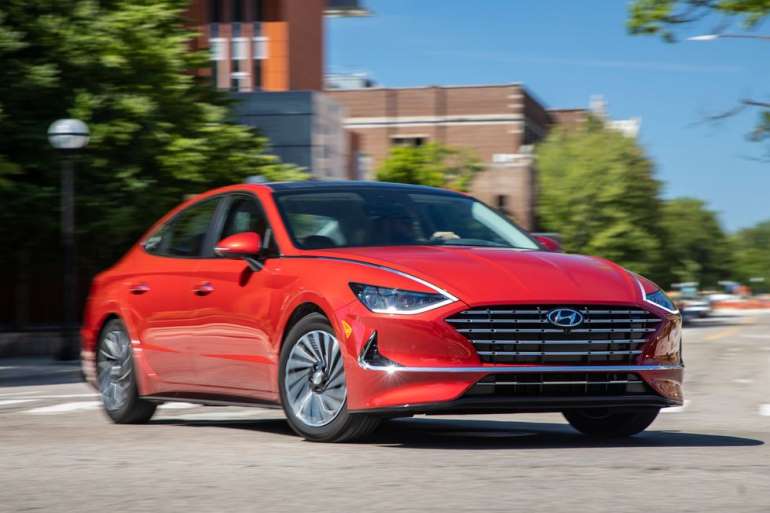 It doesn't offer the same driving dynamics as the Honda Accord, but the Sonata's hybrid model has the best fuel economy of the mid-size family sedans we've tested.

Hyundai redesigned its Sonata sedan in 2020, hoping that its new styling and updated tech would help it compete with other popular mid-sizers such as the Toyota Camry and our longtime favorite in the segment, the Honda Accord. But while Hyundai sold 76,997 Sonatas last year, Honda moved nearly 270,000 Accords, and nearly 300,000 Camrys found new homes, proving that the winnowing of the sedan category—no more Ford, no more General Motors—has left only the most ruthless competition. And to compete with the Camry and Accord, it's a given that you need to offer a fuel-sipping hybrid model. Hyundai actually offers two distinct electrified Sonatas, the Sonata Hybrid and Sonata Hybrid Blue, with the latter scoring an EPA combined 52 mpg. Unlike the Accord, however, fun behind the wheel doesn't seem like it was part of the Sonata's design brief. 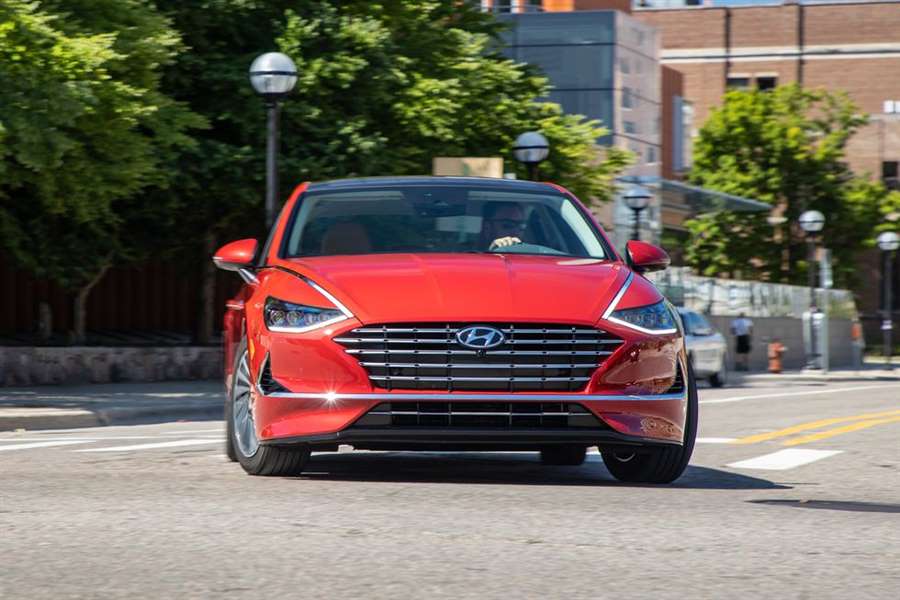 Sonata Hybrids are powered by a 150-hp 2.0-liter four-cylinder paired with an electric motor and battery pack, generating a combined 192 horsepower. The updated model has new shift programming for the six-speed automatic transmission, which Hyundai claims makes the shifts smoother. Nonetheless, the transition between the electric motor and gas engine is convulsive, and there's occasional lag when shifting. The Sonata's conventional automatic transmission makes it an outlier in the mid-size hybrid crowd, with the Accord using a one-speed direct-drive transmission and the Camry employing a continuously variable automatic (CVT). The Accord isn't much more powerful than the Sonata—it's rated at 212 horsepower—but it's a full second quicker to 60 mph, taking 7.1 seconds to reach 60 mph compared to the Sonata's 8.1-second plod.

Hyundai's new look for the Sonata is generally attractive, even if it looks a bit awkward from a few angles, and our test car's 17-inch wheels, standard on the SEL and Limited models, don't help its looks, either. But small wheels do help with its fuel economy, as indicated by the Blue's EPA numbers—it uses 16-inch wheels. Honda's top Touring trim for the Accord Hybrid can be equipped with a set of 19-inch wheels, which likely hurt its fuel economy in our most recent test. 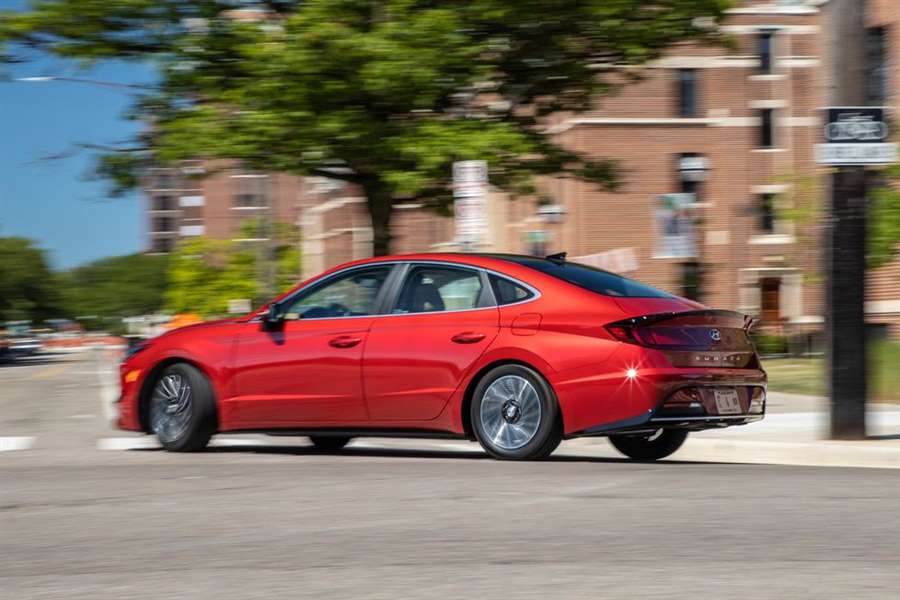 When we tested a 2020 Hyundai Sonata Hybrid, we achieved 51 mpg during our 75-mph highway fuel-economy test. And we barely noticed the fuel gauge ticking down during our time with this 2021 example. The 2021 Sonata Hybrid is EPA rated at 47 mpg combined, while the Blue model earns a 52 mpg rating thanks to a 16-inch wheel-and-tire package and the removal of the spare tire. A Honda Accord hybrid only managed 35 mpg in our highway fuel-economy test, a deficit that can't be ascribed to any one factor. But on the highway, the Sonata's conventional automatic transmission and smaller wheels and tires definitely gave it an advantage. The Toyota Camry scores up to 52 mpg in the EPA's ratings, but the CVT-equipped Camry is also less than enthralling to drive.

Exclusive to the Limited model, the Sonata offers a feature unique in the segment: solar panels on the roof. Hyundai says that the solar roof can add up to two miles of driving range per day, and it charges both the standard 12-volt battery and the hybrid powertrain's 1.6-kWh lithium-ion battery pack. Should the 12-volt battery go dead, the Sonata is the rare hybrid that can jump-start itself. Push the 12V Batt Reset button on the dash and the Hyundai will use its high-voltage battery as an onboard jump pack. Very clever. 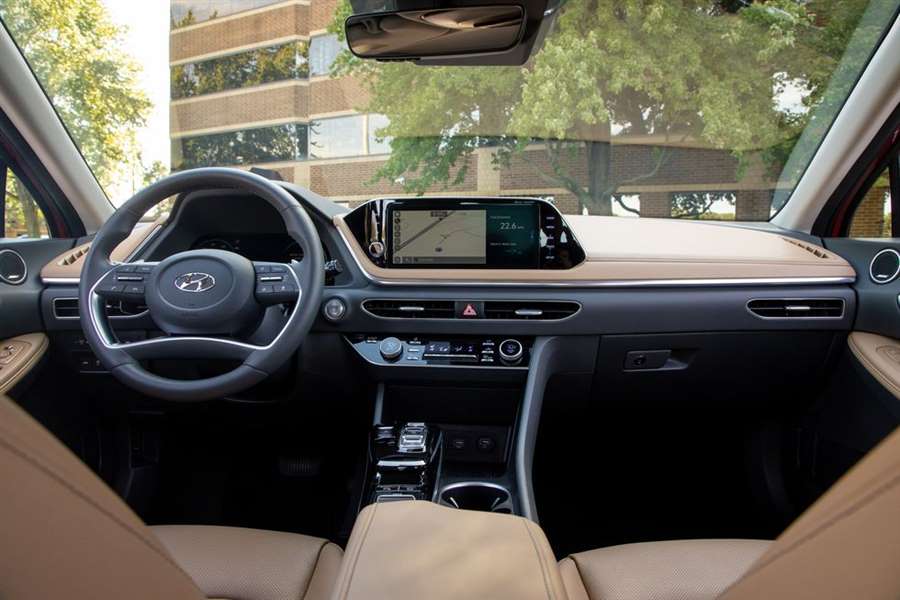 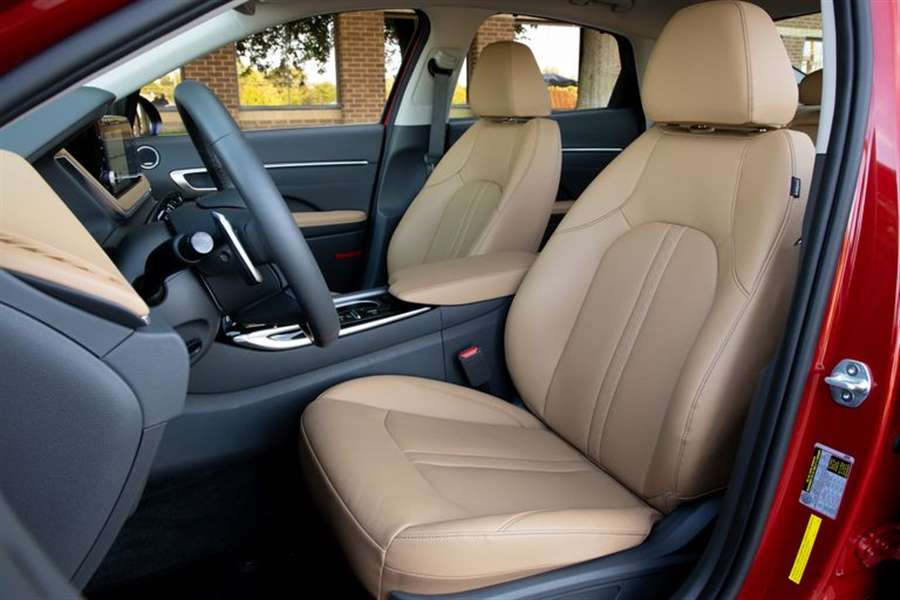 As soon as you open the solid-feeling door, it's evident that this is a relative of Genesis, Hyundai's luxury wing. The driver's seat seems unusually high, perhaps a subtle bid to keep potential crossover buyers in the sedan camp. Upon start, the gauge cluster comes to life with crisp, animated graphics that look like something from a German brand. However, the 12.3-inch screen behind the wheel is only available on the top-of-the-line Limited model. Touches of Genesis carry over into the climate controls, too, where textured silver rings surround the knobs. The Limited gets a 10.3-inch dash infotainment screen, with other models getting an 8.0-inch screen. There, as in other Hyundai and Kia products, drivers can select an array of calming sounds, like a crackling fireplace. 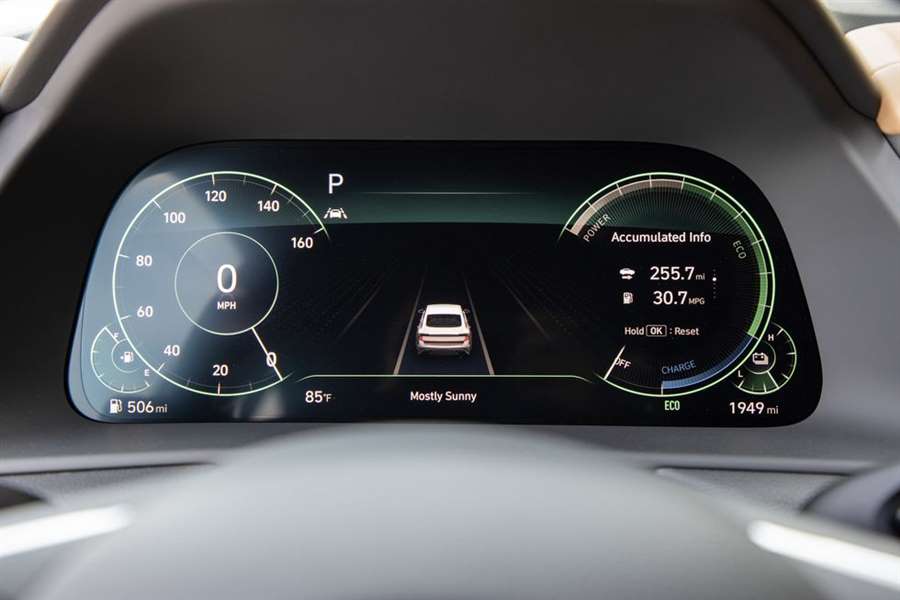 The Sonata Hybrid slots between the Accord and Camry in price, starting at $28,755 for the base Blue model. Our Limited test car, which included full LED headlamps, the solar roof, and a leather interior, stickered for $36,474, which still puts it well below the average new-car price. The Sonata might not be the performance champ of the mid-size-hybrid segment, but it does have its particular merits, stellar highway fuel economy and styling that dares to have a point of view among them. But you get both of those things on the least expensive model, the Blue, along with an extra five miles per gallon. So, while we enjoy luxury frills as much as anyone, it seems that the most compelling Sonata Hybrid is also the most affordable one.