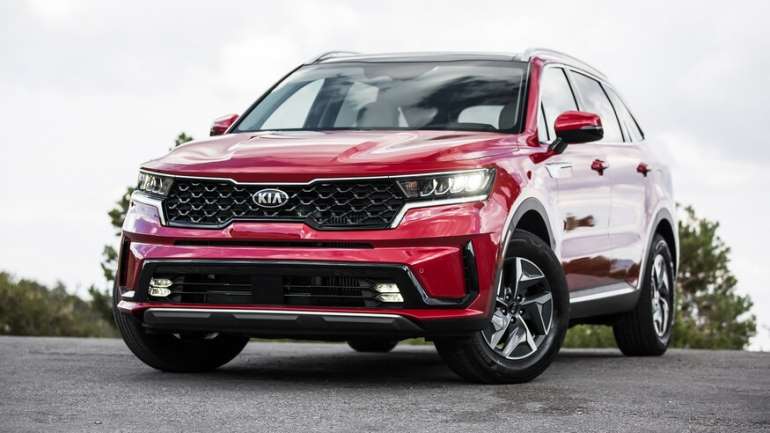 The Kia Sorento is one of the better midsize SUVs you can buy, but it just missed a podium placement in our midsize SUV rankings. So what gives? Well, despite its confident handling, eager responses, and tech-forward interior, the mainstream turbocharged gas powertrain isn't as refined as it should be. We recently tested the Sorento Hybrid, and it has an entirely different personality. Is this the pick of the litter?

While the non-hybrid Sorento offers a broad range of models, Kia streamlined the hybrid lineup into two moderately contented trims. Our test example was the higher EX version, which is far from Spartan but not as plush as the tippy-top conventional Sorentos, and it's worth noting the hybrid only offers a six-seat configuration where the regular version also has an available seven-seat layout. Fuel economy is the main draw here, with hybrids achieving 39/35 mpg city/highway. In comparison, the gas-only 2022 Sorento tops out at 24/29 mpg with the base engine and 22/29 mpg with the turbo four-cylinder—all with front-wheel drive.

To achieve these strong results, the 2022 Kia Sorento Hybrid teams a 1.6-liter turbocharged four-cylinder, electric motor, and lithium-ion battery pack to deliver a healthy 227 horsepower and 258 lb-ft of torque to the front wheels. (AWD adds $1,800-$2,300, depending on trim level.) The hybrid trades the regular Sorento's clunky eight-speed dual-clutch transmission for an unobtrusive six-speed planetary automatic.

In our tests, the Sorento Hybrid ran from 0-60 mph in 8.4 seconds. That matches exactly the time we achieved in a Toyota Highlander Hybrid AWD, which is larger than the tweener Kia. Unsurprisingly, the Sorento Hybrid is quite a bit slower than the 281-hp turbocharged Sorento, which hit the mark in 6.3 seconds. More troubling than the mediocre acceleration time is exactly how the Sorento accelerates and its lack of power, especially at speeds above 50 mph. There's a bit of a sugaring feel from the hybrid's turbocharged engine, too, which is a disappointment.

Our feelings were mixed on the Sorento Hybrid's ride, with some noting it could use refinement. Handling is a tough call, too. On our figure-eight course, the Kia turned in a time of 27.7 seconds at an average 0.62 g, a better performance than we achieved in the Highlander Hybrid (28.4 seconds at 0.58 g). The non-hybrid Sorento beats them both with a time of 26.5 seconds at 0.67 g. Our test team praised the Sorento Hybrid's natural steering feel and neutral chassis, but its performance wasn't consistent. "Acceleration was brisk while I had an almost full battery but clearly waned when I got down to one last bar," road test editor Chris Walton said. We also noted considerable body lean.

Because hybrids often suffer from mushy or non-linear brakes, we were curious to see how the SUV would perform in our 60-0-mph test. The Sorento Hybrid stopped in 121 feet, on par with the Highlander Hybrid but a slightly longer distance than the non-hybrid Sorento. Nevertheless, our test team praised the Sorento Hybrid's brake feel and overall body control.

As a whole, the Sorento Hybrid's driving experience failed to impress. The turbo gas-only Sorento is the more tempting option, even if its engine and transmission combination rarely serve up a smooth off-the-line start.

How It Is To Live With

At least the hybrid doesn't sacrifice much interior space for better fuel economy. It offers slightly less legroom in the second row than the non-hybrid model, but it has the same amount of legroom in other rows and the same amount of cargo space. Headroom is tight in the third row, although legroom there is reasonable enough—if still tight—for a three-row SUV of this size. The raised floor causes your knees to sit up higher than you might imagine. Bottom line: The back row is best for occasional use.

The interior departs from Kia's usual designs. Along with vertical-oriented air vents, the cabin features a space-saving rotary gear shifter. For the 2022 model year, all Sorento Hybrids feature a sleek 10.3-inch touchscreen. (Our 2021 model photo vehicle was stuck with an 8.0-inch screen).

Our Sorento Hybrid EX came with a slew of standard safety features, including rear blind-spot collision avoidance assist, rear cross-traffic collision avoidance assist, stop-and-go adaptive cruise control, and a helpful lane keep assist feature. Heated front seats, an expansive panoramic sunroof, and USB chargers for all three rows sweeten the deal. Kia is known for its strong feature-per-dollar value, and although this isn't a shining example, our Sorento Hybrid test vehicle offers a solid amount of equipment for just under $38,000. Looking at value in terms of five-year cost of ownership, the Sorento Hybrid is just adequate. Considering costs such as depreciation, insurance, fuel, and maintenance over a five-year period, our partners at IntelliChoice gave the 2022 Sorento Hybrid an Average value rating.

Kia has a unique product on its hands: a stylish, three-row SUV that's not too big and that provides excellent hybrid fuel economy. But be prepared to sacrifice performance for efficiency. The Sorento Hybrid lacks the wow factor of Kia's other three-row SUV, the Telluride. At the end of the day, the Sorento Hybrid is a solid vehicle, and it would have been hugely impressive just a few years ago, but we now know how much better Kia can do.