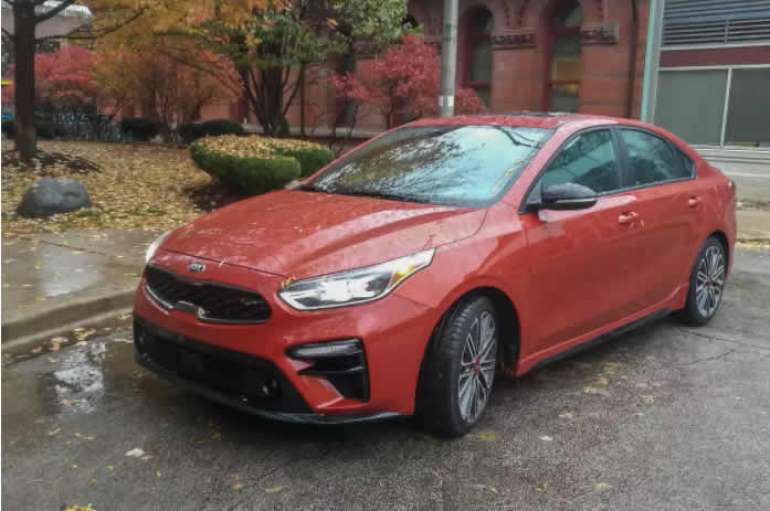 The verdict: Compact cars are often purchased as basic transit, and the 2020 Kia Forte answers that call, but if you splurge for a GT trim you’ll get a bit of inexpensive fun without sacrificing everyday drivability.

Versus the competition: Some compact sedans offer versions with sporty appearance packages that fail to deliver on the fun mechanics, but the Forte GT is not guilty of that. Its performance and cabin upgrades deliver enough action to help the car stand out yet keep costs reasonable.

The Forte competes in the compact sedan class against the likes of the Honda Civic, Hyundai Elantra and Toyota Corolla; see them compared. Each of those cars offers an enthusiast version: the Civic Si, Elantra N Line and Corolla Apex.

Kia’s compact sedan was redesigned for 2019 and has seen few changes since. The biggest was 2020’s addition of a sport-oriented GT trim level with a new turbocharged engine and sport suspension. 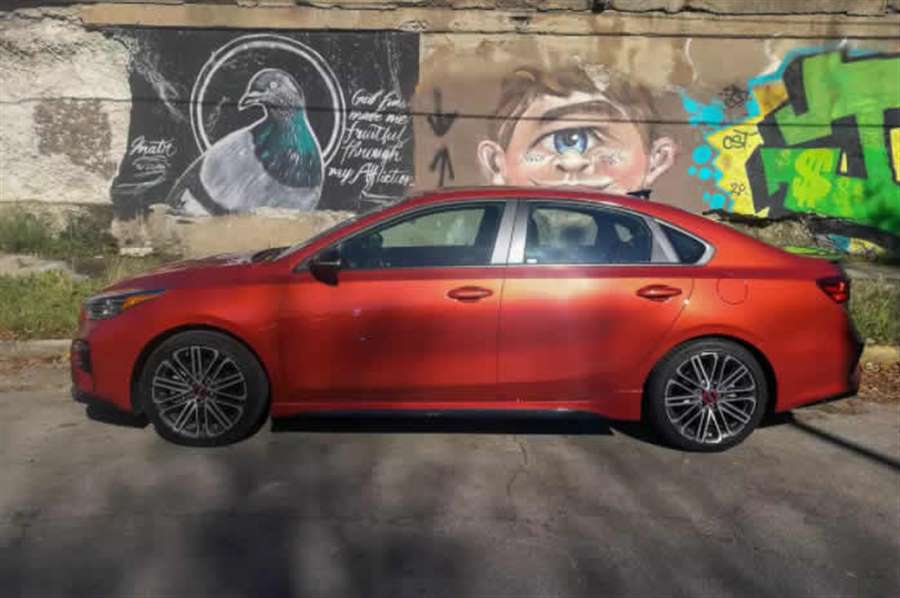 The Forte GT is pleasantly peppy. Its upgraded engine — a 201-horsepower, turbocharged 1.6-liter four-cylinder — hustles fairly quickly off the line, and you’ll hear it; the throaty exhaust note comes on strong and is a nice complement to the engine’s added oomph. The four-cylinder is paired with a seven-speed dual-clutch automatic transmission that behaves nicely, with well-timed, smooth shifts; a six-speed manual is also available. Other Forte trim levels make do with the standard 147-hp, 2.0-liter four-cylinder and continuously variable automatic transmission.

Regardless of whether you choose the manual or automatic transmission, the GT’s added fun will cost you 3 mpg combined versus the standard engine: The regular Forte 2.0-liter is EPA-rated 31 or 33 mpg combined with the manual and CVT, respectively, while the GT is rated 28 or 30 mpg, respectively. The Forte GT and Elantra N Line are a bit thirstier with a manual than is the Civic Si, which is rated 30 mpg combined, but they offer more efficient automatics, which the Honda lacks. The Corolla Apex tops them all at 32 mpg with a stick shift and 34 mpg with an automatic, but it comes with trade-offs I’ll address below.

The Forte’s selectable driving modes alter its character quite a bit — for better and for worse. For extra responsiveness, pop it into Sport mode for more aggressive acceleration response and shift timing. Smart mode is designed to save gas, and it dulls acceleration and overall responsiveness.

Besides its unique drivetrain, the GT also gets a sport-tuned suspension. It handles nicely; the firm suspension deftly navigates curves with little lean, and there’s adequate shock absorption over bumps. Its steering has a quickness that further helps deliver a playful, connected-to-the-road feel.

The Forte GT is fairly well matched in terms of power against the Honda Civic Si and Hyundai Elantra N Line, which shares its engine with the Forte GT. (This comparison is most relevant because their weights are relatively similar.) Toyota’s sport-oriented version of the Corolla disappoints; like the others, the Corolla Apex has the added visual flair of a sport model and some suspension upgrades, but not enough performance goodies to make it much more entertaining to drive than a regular Corolla — which is to say, about as fun as attending a condo board meeting. 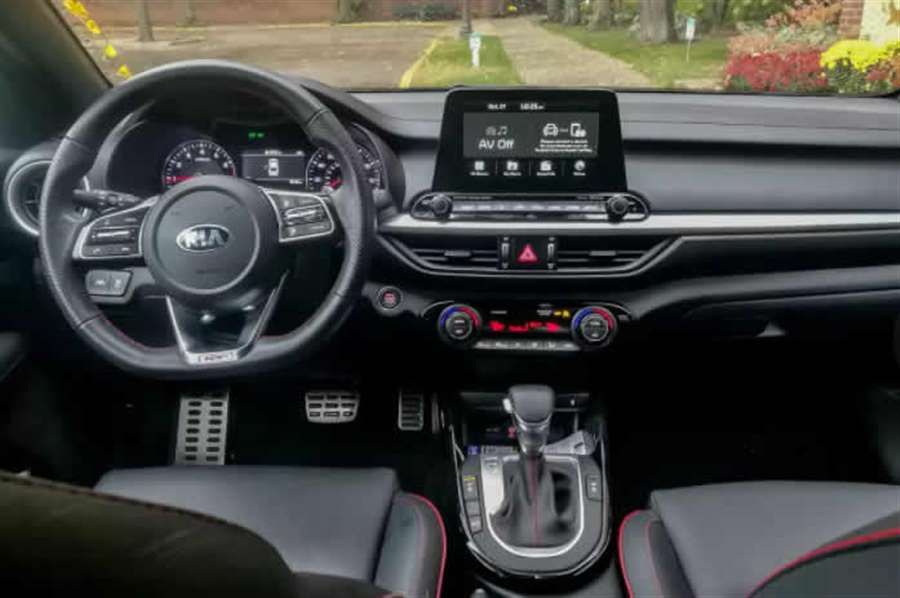 The Forte’s clean, horizontal dashboard design appeals for its simplicity; elsewhere, the cabin strikes a jazzy tone with sport seats with red contrast stitching, a flat-bottom steering wheel, and pops of glossy black trim on the dash and doors. There’s some hard plastic on the door panels and at knee level, but most surfaces feel decently padded.

Under the screen are several physical climate controls, which are also located within easy reach. Android Auto and Apple CarPlay smartphone integration are standard, and a wireless charging tray for compatible phones is optional. Other available features include heated and ventilated front seats and a 320-watt Harman Kardon premium audio system.

The Forte is mid-pack in both backseat headroom and legroom, but it loses points for child-safety seat accommodations. Front legroom is tight when rear-facing car seats are in place, and installation isn’t easy; the lower Latch anchors are buried in stiff upholstery and require some muscle to access. Other compact sedans have similar legroom issues but easier-to-access Latch anchors.

According to manufacturer specifications, the Forte’s trunk space is slightly larger than its competitors’ at 15.3 cubic feet. In practice, though, it’s disappointing. The trunk is deep, but the opening isn’t very tall, so fitting anything other than small items inside is tough. Its hinges also intrude into the space, potentially crushing cargo. Its cargo net, however, is a nice way to keep smaller items from rolling around (and getting crushed).

The 2020 Kia Forte is well-equipped with a lot of standard safety features. All models get a forward collision warning system with automatic emergency braking, lane departure warning, lane keep assist and a driver attention warning system.

Upper trim levels get even more standard safety equipment: a blind spot warning system with lane change assist and rear cross-traffic alert is standard on EX, GT-Line and GT trims. On the GT, adaptive cruise control and a reverse parking distance warning system are optional; they’re unavailable on other trims.

Competitors offer similar levels of standard and available safety features, but the Forte GT costs a lot less. With the automatic, it starts at $23,655 — lower than automatic versions of the Elantra N Line ($26,195) and Corolla Apex ($26,065). The Civic Si — which comes only with a manual transmission — starts at $26,155 in sedan trim. All prices include destination charges.

Budget is usually top-of-mind for compact sedan shoppers, but those willing to spend a little extra for fun will get just that with the Kia Forte GT.

Tagged under
More in this category: « 2021 Kia K5 Pros and Cons Review: Better Than Accord? 2021 Kia Sorento Is Compelling in Hybrid Form »