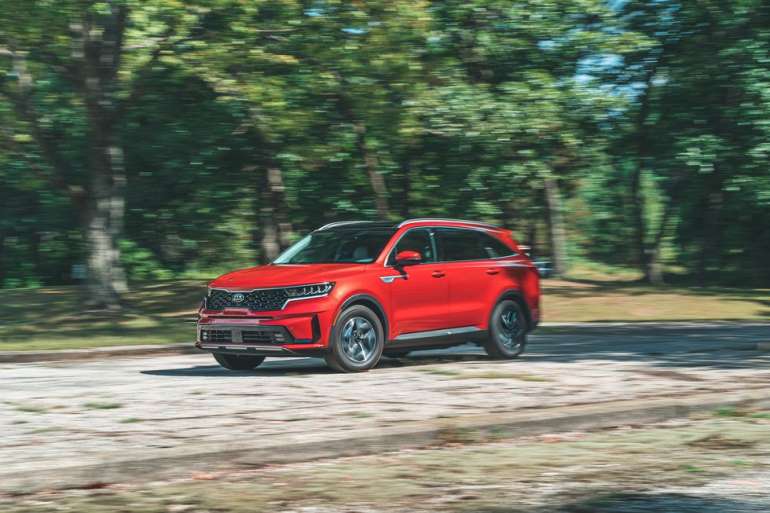 The new 2021 Kia Sorento hybrid doesn't make a big deal of itself, despite being the first electrically assisted version of Kia's mid-size crossover. It's got a 1.6-liter turbocharged four-cylinder mated to a six-speed automatic transmission, and it drives like you'd expect—except that the little four feels like it has about 25 percent more displacement than it actually does. In fact, the Sorento hybrid's combined output—227 horsepower and 258 pound-feet of torque—nearly matches that of the 2020 Volkswagen GTI. Like a GTI, the front-wheel-drive Sorento torments its front tires with torque. Unlike the compact GTI, though, it has three rows of seats and an EPA combined estimate of 37 mpg. Thus concludes our references to the Volkswagen GTI, but we hope the comparisons helped you subliminally internalize the idea that the Sorento hybrid is actually kind of fun.

To get the Sorento hybrid's 227 horses out of a 1.6-liter turbo four, you'd generally have to boost the bejesus out of it. Kia didn't do that. But it did pair the engine with a sizable electric motor and a 1.5-kWh lithium battery that enables some neat tricks. Such as producing an abundance of torque off the line and sailing along at highway speeds with the engine off. And, yes, achieving solid fuel-economy ratings of 39 mpg in the city and 35 on the highway. Our 75-mph highway fuel economy test returned 42 mpg, 13 percent better than the EPA’s estimate, and unleashes the potential for a whopping 740 miles of range from its 17.7-gallon fuel tank.

Kia's highly specific spec sheet lists the 1.6-liter as making 177.2 horsepower and 195.4 pound-feet of torque from 1500 to 4500 rpm. The electric motor generates a claimed 60.1 horses and 194.7 pound-feet from zero up to 1600 revs. Notice that those two torque figures are almost the same and happen at low revs, which helps explain why the hybrid's low-end grunt feels diesel-like in strength. It's simply a smooth, prodigious shove that's out of proportion to the gas engine's displacement. The duo combines to send the Sorento to 60 mph in 7.2 seconds and through the quarter-mile in 15.6 seconds at 92 mph. The powertrain's responsiveness is reflected in the Sorento's 5-to-60-mph time of 7.9 seconds—the power is there, real-world ready when you need it.

The 1.6 does sometimes lug at low rpm, particularly when climbing grades, as the transmission holds a tall gear and leans on the electric motor for help. But that's a common hybrid trait. As dealership sales reps like to say: They all do that. And as we often say: At least it's not a CVT (continuously variable automatic transmission). Should you desire a lower gear from the Sorento hybrid's conventional automatic, there are paddle shifters on the back of the steering wheel. We doubt too many Sorento hybrid drivers will be grabbing downshifts on their way into a max-attack run at their favorite off-ramp, but in that unlikely scenario, the Sorento hybrid can generate a respectable 0.81 g of lateral acceleration.

Priced at $34,765 to start for the base S trim, the hybrid costs $1700 more than a nonhybrid Sorento S, which employs a 191-hp naturally aspirated 2.5-liter four-cylinder and an eight-speed automatic. That model is only rated at 26 mpg combined, and the EPA figures that over five years, the hybrid will save you $2500 in fuel compared to the average new vehicle. Your mileage may vary, of course, but you'll notice that those estimated savings neatly erase the hybrid's price premium. It looks as if a half-decade is your financial break-even point, if that's a motivating factor. But the hybrid also is the significantly more powerful option, and that's a worthy upgrade on its own. It won't outpace a Sorento with the optional 281-hp 2.5-liter turbo four that we've already tested, but giving up 0.9 second to 60 mph seems like a pretty fair trade to earn an additional 11 mpg on the EPA combined cycle. The hybrid S also costs $1400 less than the least expensive 2.5-liter turbo model, the front-wheel-drive EX.

For 2022. the Sorento hybrid will also be offered with all-wheel drive starting at $36,965. Or consider the $46,165 Sorento plug-in hybrid's EPA-rated 32-mile range of electric driving with a combined 261 horses. The hybrid shouldn't be your pick if you expect to tow much with it, as its 2000-pound tow rating lags behind the nonhybrid models' 3500-pound max. But if hauling a load isn't an issue, you may as well spring for the hybrid over the standard Sorento. Think of it as a five-year investment in free horsepower.