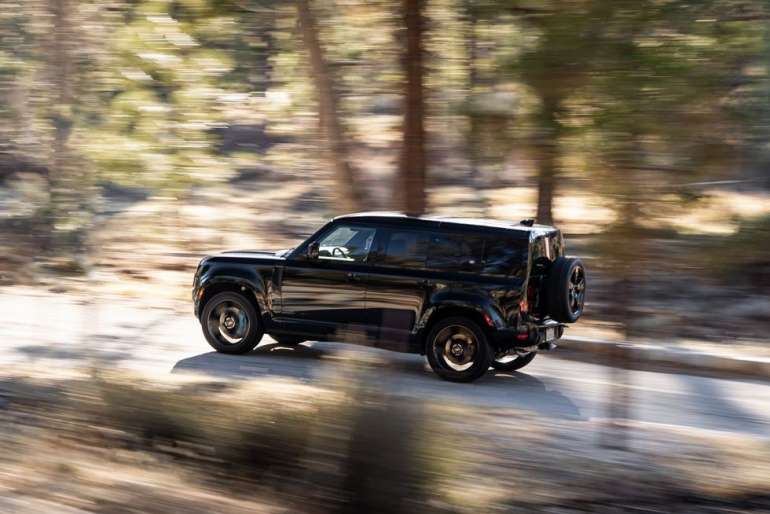 While performance SUVs may be a dime a dozen these days, it's taken some time for automakers to apply their fire-breathing formulas to more utilitarian offerings. Land Rover, for example, is just now bringing a rumble to the jungle with its V-8-powered Defender. But as block-shaped missiles with six-figure price tags go, it was worth the wait. Safaris will never be the same.

If the Defender V8's recipe seems familiar, it's because Mercedes-AMG used a similar playbook when transforming Benz's rugged G-class into the swaggering expression of superiority that is the G63. For the Defender V8, credit largely goes to the supercharged 5.0-liter V-8 beneath its hood. Cranking out 518 horsepower and 461 pound-feet of torque, it delivers the necessary aural cues to assert a menacing attitude. Even the quad exhaust tips out back seem cut from the same metallic cloth, though the soundtrack blasted through the pipes is more mellifluous in tone than the G63's machine-gun rat-a-tat-tat.

The Defender's roughly three-ton curb weight is responsible for taming its beastly engine, resulting in acceleration that's more authoritative than urgent. Think 60-mph times in the low-five-second range—roughly a second or so quicker than the inline-six-powered 110 model that we last tested, but the V8 also carries around a few hundred more pounds. Still, it's clear from the behind the wheel that the blown V-8 has fun countering this Rover's prodigious mass, roaring gleefully all the way to its 6750-rpm redline. The Defender's standard ZF eight-speed automatic transmission is a willing cohort, responding instantly to a click of the paddle shifters on the back of the steering wheel that only the V8 model gets. Once a gear is selected, the transmission will dutifully hold on to it until directed otherwise. Fortunately, the V8 model's big brakes—14.9-inch front rotors, 14.3-inchers in back—are strong and inspire confidence, offering a reassuringly firm and progressive pedal feel, even after heavy use.

Further leaning into its inevitable role as a pavement-dwelling brute, the Defender V8's Terrain Response system gains a new Dynamic mode, which sharpens the engine throttle response and stiffens up the adaptive dampers. Larger anti-roll bars and an electronically activated rear differential also conspire to give this portly top-heavy beast a commendable interpretation of agility. Hustling along the winding canyon roads through the Angeles National Forest, the Defender V8's tenacity in corners surprised several drivers. Push it too hard, however, and the stability control will intervene with all the subtlety of a bear trap.

Of course, the Defender's roots ostensibly remain planted off-road, despite its newfound pavement prowess. With the air springs cranked up to their maximum height—providing 11.5 inches of ground clearance—and the low-range transfer case engaged, there are few trails this Defender won't be able to navigate. Climbing steep inclines is child's play for the V8 model, which burbles contentedly just above idle, free of stress and full of torque. And while these back-road journeys are technically possible with the standard 22-inch wheels and all-season tires, we don't recommend it. The slim sidewalls betray the suspension's composure by transmitting every impact, however minor, straight into the cabin. If you're determined to use the Defender V8 to its fullest potential, we heartily suggest opting for the no-cost 20-inch wheels and $350 all-terrain tires.

Those wanting even more options will be disappointed, as the Defender V8 comes fairly loaded in its base form. Color choices are limited to an uninspiring three shades—black, white, and gray—and the vehicle we drove looked as if it had been dipped in a black hole. As if that weren't enough to absorb all the available light, the Extended Black Exterior package ($1180) slathered dark finishes on the remaining contrasting bits. Inside, the Pivi Pro infotainment system sports a larger 11.4-inch touchscreen—a $140 option on our example, look for it to be standard on 2023 models. We still find this system to be sluggish at times, though we appreciate the highly configurable options and well-organized Terrain Response menus, which include detailed descriptions for each mode. However, we wish that we could read up on a given mode without first having to engage it. And since the Defender V8 can tow up to 8201 pounds, we'd like the ability to more closely monitor the engine's vitals beyond a lone water-temperature gauge.

But while these details might matter to us and a handful of others, we suspect the majority of Land Rover Defender V8s will be spotted with a trailer about as often as they will be found off-road—in other words, rarely. That's partially attributable to the 2022 110 model's starting price of $109,560. Unlike the Mercedes G-class, however, the Defender comes in plenty of milder flavors aimed at satisfying a more practically minded contingent—freeing the V8 models to revel in their supercharged excess.