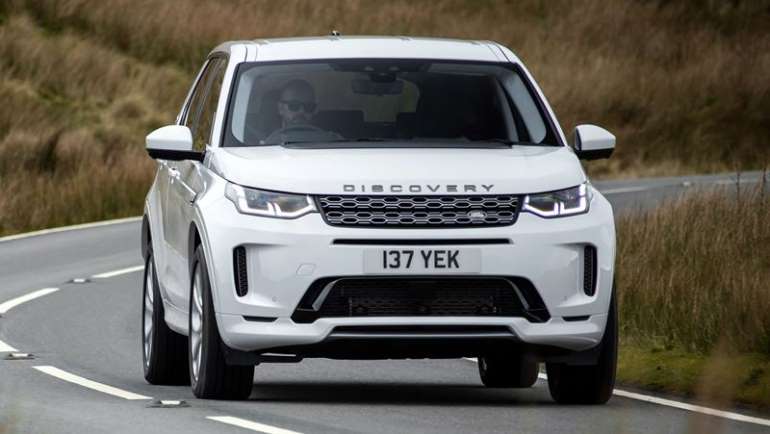 The Land Rover Discovery Sport P300e plug-in hybrid promises 135mpg and an all-electric range of 38 miles, but does it deliver?

The switch to plug-in electrification does bring a compromise or two to Land Rover’s most affordable family SUV. You’ll need to accept it as a five-seater only, and it comes with a pretty hefty price that may put off private buyers. But for company car choosers, the considerable BiK savings are impossible to ignore; this is a very practical vehicle that is still good to drive, and suddenly more affordable.

The Land Rover Discovery Sport really upped its game when it switched platforms as part of a mid-life update last year. Mild-hybrid power helped the family SUV to deliver much-needed efficiency gains - but now there’s the option of a plug-in hybrid version that could be ideally suited to daily commutes and school runs.

The Discovery Sport P300e shares its basic powertrain with the newly launched Evoque P300e. That means a 1.5-litre three-cylinder petrol engine driving the front wheels, and 107bhp electric motor on the rear axle, delivering four-wheel drive when required. There’s 15kWh battery, too - enough, Land Rover claims, for the car to travel up to 38 miles on electric power alone. With a Benefit-in-Kind tax rating of 10 per cent, that should make this Disco Sport a hefty chunk cheaper for company car choosers than any of its siblings.

The adoption of the part-electric powertrain doesn’t affect the Disco Sport’s four-wheel drive credentials; the electric motor on the back axle is always on standby for slippery conditions and off-roading, even if the official battery capacity is at zero. It does remove the possibility of the Disco Sport’s occasional third-row seats, sadly - but the boot capacity beyond the second row is still cavernous, at 963 litres.

If you’re wondering if a three-cylinder engine-based powertrain can have enough shove to cope with such a practicality-focused model, you needn’t worry. The instant torque from the electric motor allows the Disco Sport to glide around town without much effort at all. It would feel quite at home completing a week’s worth of short school runs on EV power alone, frankly - and the ability to go from zero to 80 per cent of battery capacity in less than 90 minutes on even a 7kW home wallbox would make overnight recharges very easy indeed.

The car’s behaviour on the open road is a slightly different matter. We’ve been impressed with the P300e powertrain’s smooth transitions in the Evoque and that trait is present and correct here too, we’re glad to report. Keep the Disco Sport in Hybrid mode and should you extend the system to the point where the engine kicks in, you’ll barely notice the start-up. In this area at least, Land Rover’s is among the best set-ups that we’ve experienced.

The engine itself, though, is definitely more vocal in the Disco Sport than it is in the Evoque. It doesn’t appear to be revs-related either, but there are harmonies and chirps allowed through to the cabin in the Disco that simply aren’t present in its smaller, style-focused stablemate. We’re bemused by this - the installation ought to be damn-near identical - but perhaps there’s a layer of soundproofing that gets applied to Range Rovers but not to Land Rovers.

Either way, just accept that you will get some three-cylinder grumble here - but in the grand scheme of things it’s probably no worse than what you’d experience with a modern diesel. And as with the Evoque, you can use a natty gauge in the instrument panel to temper your attitude on the right-hand pedal and, battery level permitting, prevent the engine from being called upon at all, particularly around town.

The drive itself is every bit as accomplished in P300e form as it is in regular Disco Sports. The transmission in the PHEV is an eight-speed auto (compared with nine-speeds elsewhere in the range) but it’s a solid performer, smart enough to work with the driver and delivering smooth shifts when required.

There’s no getting around the fact that this is a tallish SUV, so there’s a bit of body roll in corners, but in general it’s well controlled and there’s bags of grip to give you confidence, even in slippery conditions. The steering remains slower than in the Landie’s German rivals, but it’s precise enough and makes it easy to place the car in corners. Front visibility is still a strong point, too, and the ClearSight digital rear-view mirror helps to eliminate blind spots behind you.

The 2021-model-year Discovery Sport gets Land Rover’s latest Pivi Pro infotainment system, which is a huge leap over what was previously offered. It delivers proper smartphone integration and the system has quick to respond to inputs.

Curiously, the P300e is being restricted to R-Dynamic editions of the Discovery Sport - although you at least have the option of S, SE and HSE once you’ve ticked that initial box. That means you get plenty of kit, even at the entry point that we’ve driven here, but it does bump the price up to the point where private buyers would need to think hard about the potential savings on running costs.