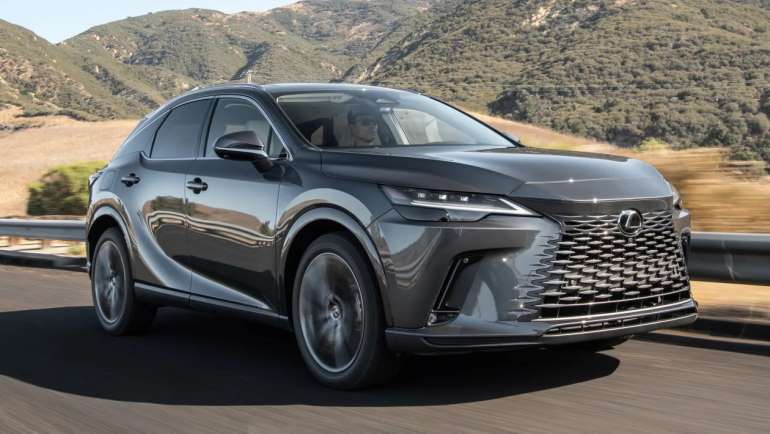 The new Lexus RX takes known tech from the smaller NX and extrapolates this into a bigger package. There's much to like here. The new infotainment and the efficiency potential from the 450h+ powertrain are huge steps forward, while the Lexus rides and handles fairly well. However, it doesn't fulfil its brief quite as well as its smaller sibling. In this large premium SUV class the Lexus is facing some very luxurious competition, such as the BMW X5 xDrive45e, and we'd like a little more refinement as a result. Pricing will also be key to the success of the package.

For years Lexus has tried and not necessarily always succeeded in taking on established premium players – mostly from Germany – but more recently it's hit a rich vein of form. 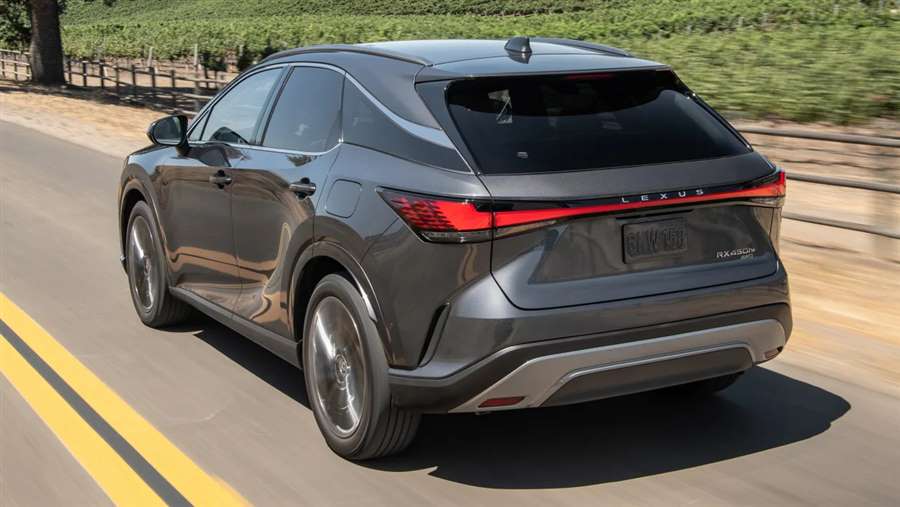 Thanks to an all-new platform and, in something of a first from Lexus, a plug-in hybrid powertrain, the brand's latest NX mid-size premium SUV boasts a brilliant all-round blend of qualities in this most competitive of classes. And now Lexus is aiming to scale up that formula for its all-new RX.

Whereas the NX rivals cars such as the BMW X3 and Mercedes GLC, the RX is a BMW X5 and Mercedes GLE competitor. But like its smaller sibling, this fifth-generation RX is also based on the brand new GA-K platform and features Lexus's 450h+ powertrain, making it the first-ever plug-in hybrid RX. In fact, Lexus claims “it's a complete reinvention of the large luxury SUV”.

That's quite a statement - as is the new car's styling, which is the first thing you might notice. Along with the NX and forthcoming RZ all-electric SUV, this RX will define the Japanese brand's next chapter in terms of design.

We've seen the firm's 'spindle grille' front-end before, but the RX evolves that into what Lexus is calling 'spindle body'. The grille is bigger with the overall shape now integrated into the whole front end of the car's body.

There are slim headlights, sharp creases down the sides and a rakish 'floating' roof thanks to blacked-out C-pillars, plus a full-width light bar across the raked tailgate. It's clearly an evolution in design terms, but still recognisably a Lexus. 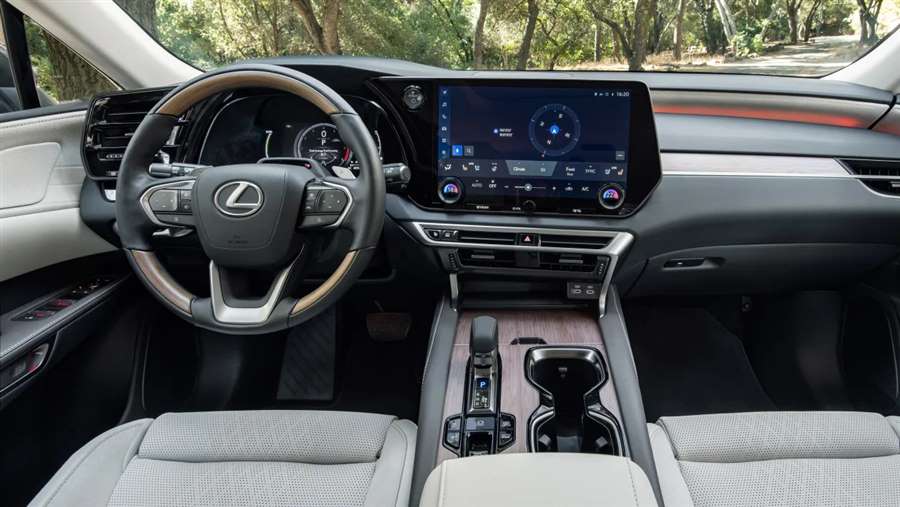 The same is true inside. The brand is making a much bigger feature of its Japanese heritage these days, and we're all for it. The cabin takes a 'less is more' approach, with the 14-inch central touchscreen dominating the layout.

Lexus's latest infotainment system is a massive improvement on the old track pad-based setup in the previous RX, too. It works snappily, offers plenty of features and now integrates Apple CarPlay and Android Auto, both wirelessly.

In typical Lexus fashion, the cabin feels beautifully built and material quality is good, but there's not much in the way of flair to the design, which could be an issue at this level of the market. On that point, prices will be announced later this year, but expect the base RX 350h self-charging hybrid to start from around £60,000 when it goes on sale later in 2023.

It's the new 450h+ plug-in hybrid we're focusing on here, however. It uses a 2.5-litre four-cylinder petrol engine working in conjunction with an 18.1kWh battery that feeds an electric motor driving the front wheels and another unit located on the car's rear axle to deliver e-four-wheel drive. The total output stands at 304bhp with the 0-62mph sprint dispatched in 6.5 seconds.

Performance is absolutely fine. It doesn't ever feel rapid, but in electric mode there's enough grunt. Lexus claims a zero-emissions range of more than 40 miles, which seemed accurate and achievable to us on the launch.

When the 18.1kWh battery is depleted (the 6.6kW on-board charger means a full charge takes around two hours and 45 minutes), the RX uses its second battery and becomes a self-charging hybrid, like the 350h powertrain; it's a technological first as far as we're aware and means that even when you've used the bigger battery's energy, there's still strong efficiency potential. Official economy claims stand at up to 256.8mpg with CO2 emissions and a Benefit-in-Kind taxation banding as low as 24g/km and eight per cent respectively. 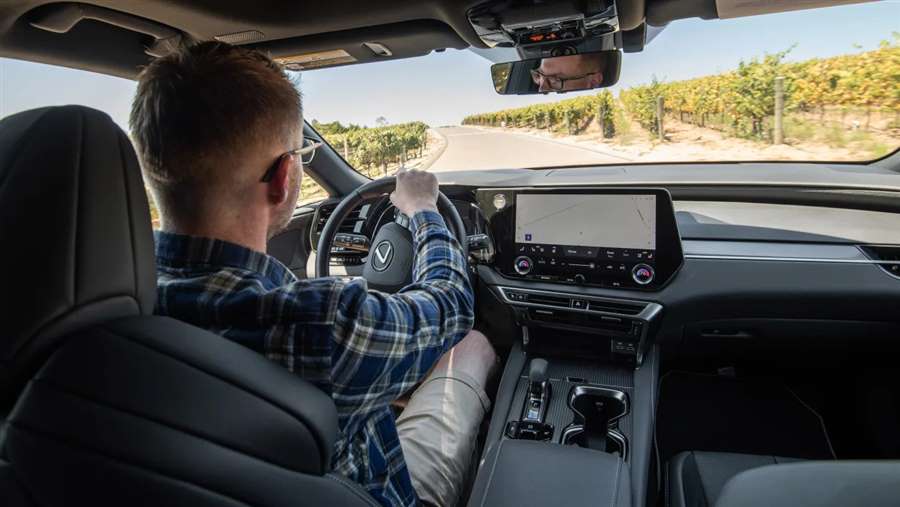 Once energy is depleted, or the petrol engine kicks in, refinement takes a hit as even with the improvements Lexus has made when it comes to the operation of its e-CVT automatic gearbox, the petrol motor still drones – especially if you ask for hard acceleration.

The trick is to drive to the powertrain's strengths and lean on the electricity. Then the engine isn't as noticeable and the RX delivers a relaxed drive.

Like with the NX, there's more linearity to the way the powertrain responds and the petrol engine revs up. This gives a better connection between car and driver, and while it's still not perfect, in a big SUV like this it prioritises comfort and easy-going dynamics over sportiness.

The new platform means the RX still acquits itself relatively well, however. Our test route in the US didn't provide much in the way of challenging corners or surfaces, but the RX rides relatively nicely, with the damping control and comfort only breaking down over the worst transverse bumps and ridges in the road, where the extra battery mass becomes apparent. Otherwise, the suspension works smoothly to filter out imperfections and control the body.

The steering is light, but this helps manoeuvrability, as does the rear-axle steering, which offers up to four degrees of lock on the back wheels. However, the RX doesn't feel like a big car. It doesn't feel like a particularly dynamic one either, but there's enough agility here by the same stroke.

In short, it delivers a decent balance between comfort and engagement, with the focus placed on the former, meaning the RX is a solid SUV from a driving perspective, given how it will be used most of the time.

The 461-litre boot is some way off the biggest cars in this class, however – and this is despite the lithium-ion battery being mounted under the car's floor to help packaging. While there's enough space for most duties, a family holiday could test the RX's load-lugging capability more than a BMW X5 xDrive45e, for example.

However, space in the rear is better with enough head and legroom (even if rivals still feel roomier), while electrically adjustable heated seats in the back are standard on top-spec Takumi models, which is a nice touch.

Tagged under
More in this category: « 2022 Lexus LX 600 Review: A Flagship Needs to Be Better