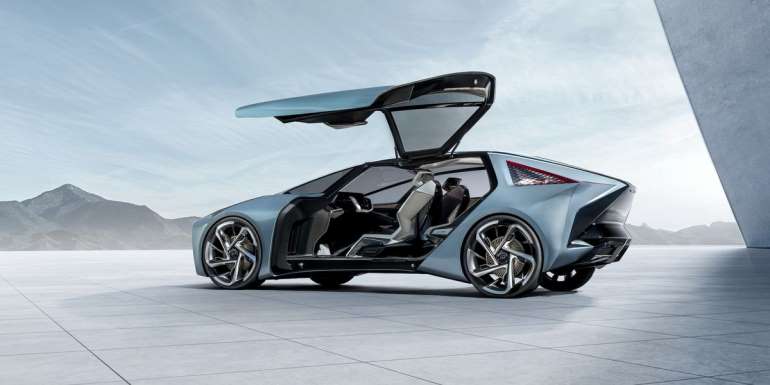 Lexus put a big effort to deliver innovative and amazing experiences. The “Lexus Electrified" vision for an upcoming generation of electrified vehicles was unveiled. Headlining this moment was the debut of the Lexus LF-30 Electrified Concept, which made its world premiere at the 46th Tokyo Motor Show.

The new 2025 Lexus LF-30 is meant to serve as a vanguard vehicle for where Lexus is planning to go in the electrified powertrain, exterior-style, advanced-technology, and cabin-enhancement departments.

Toyota and Lexus have been pioneers in parallel hybrid powertrain development, and they will use that expertise to offer even more traditional hybrid offerings, as well as plug-in hybrids and fully electric vehicles. To that end, Toyota has committed to building a dedicated battery-electric-vehicle platform.

The 2025 Lexus LF-30 Electrified concept is envisioned to be underpinned by this new architecture, as will be a production version of the LF-30 or similar whenever it arrives. Although the new platform will be used Toyota-wide, it will be optimized for Lexus applications.

The new LF-30 will have four in-wheel electric motors, which should allow for advanced torque vectoring. The LF-30 Electrified also features the latest in Toyota steer by-wire technology and what is being called Lexus Advanced Posture Control, a setup that analyzes inputs from the suspension, steering, and e-motors to keep the car in an optimum position relative to driving style and road conditions.

The baseline metrics of the LF-30 Electrified's powertrain are impressive. Its 110-kWh battery pack, which is said to be a solid-state design, can be quick charged with a 150-kW capable port. Range for the 5,291-pound vehicle is said to be around 260 miles to a full charge, give or take. Performance metrics are estimated at around 3.6 seconds to 60 mph, total system torque is 516 lb-ft, and it tops out at 124 mph. The LF-30 also comes with wireless charging capability and has an artificial intelligence controller to balance the amount of electricity it uses for the car or push power back to the home charging network when appropriate.

Although its specs are about what we've come to expect from today's cutting-edge EVs, the LF-30's exterior looks are another matter. The new change in design for LF-30 is a full blown spindle effect from front to back. Using the space afforded by not having an engine up front enabled designers to style a rising, wedge-like profile with angular, edgy fenders and a blocky rear with an even shorter overhang than the front. Several ducts were also added to cool the battery pack and the e-motors. Its expansive glass canopy can be lightened or darkened on the fly, it sports wild gullwing doors, and its lighting can be adjusted to signal to other drivers and pedestrians if it is in an autonomous mode.

Lexus will do a lot of innovation in design regarding interior and even more on the exterior. The innovation is extreme in the cabin of the LF-30 Electrified, where a new concept Lexus calls "Tazuna" has been applied. The basic premise of Tazuna is of a rider and horse, an approach that aims to simplify the driving experience by stripping down the buttons and distractions and putting vehicle operations squarely in the driver's line of sight. A U-shaped steering wheel incorporates several key features and its instrument panel is heavily augmented by an advanced head-up display. In addition, the passenger gets their own instrument panel, features of which can be accessed using gesture control. Augmented reality is also used to further enhance the in-cabin experience. For example, rear-seat passengers have the ability to adjust the roof to display video or other media via voice or gesture controls; Lexus calls this feature "Sky Gate." As befitting a future-leaning vehicle, Lexus also says the LF-30 has autonomous chauffeur and vehicle-hailing abilities, and the steering wheel can be moved out of the way when its fully autonomous mode is enabled.

Interesting option will be a drone on board. Called the Lexus Airporter, the drone is envisioned as a butler of sorts that could theoretically perform functions such as transport luggage from the car to your doorstep. We'll believe that when we see it, but it's an interesting concept.

Release date for new 2025 Lexus LF-30 should be at the end of 2024. Considering situation with Coronavirus, probably release date will be postponed.