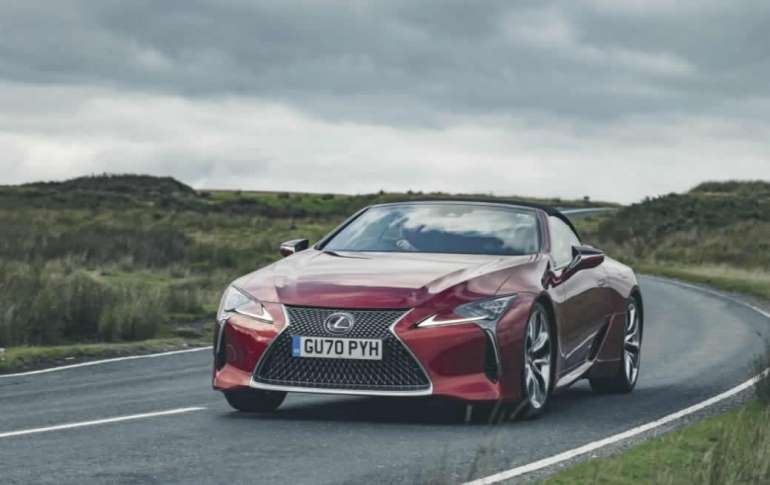 Luxury convertibles will never be big sellers, but Lexus intends the LC Convertible to be even more exclusive than most. Only planning to sell a few hundred a year should mean this car remains seriously desirable – that’s if its eye-catching looks and the allure of a powerful and characterful V8 engine aren’t enough to do that.

But being a Lexus, the LC Convertible has to be many things other than desirable. Traditional Lexus owners won’t accept anything half-baked; this is a car that has to be screwed together with more care than your average IKEA bookshelf, and one that has to be totally, completely painless to own.

As for rivals, this car can count everything from the Porsche 911 Cabriolet to the Mercedes S-Class Convertible – though at this end of the market, people are much more likely to be buying with their hearts than their heads, and while boot space or miles per gallon do matter, it’s character, presence and enjoyment that will convince these buyers.

It would seem folding hard-tops have almost had their day, and most premium convertibles – the LC Convertible included – now opt for a fabric hood instead. This has several benefits and in this case it’s speed of operation, weight distribution and looks that all benefit.

With switches hidden away carefully under the interior palm rest, raising or lowering the roof is done at the touch of a button. It takes just 15 seconds to raise or lower, and can be done at speeds of up to 31mph – so you can raise or lower to your hearts content while driving around town, in accordance with any sudden rain storms that might pass your way.

The lightweight roof mechanism means more of the LC’s weight is lower down, lowering the centre of gravity which improves cornering and comfort. Better yet, Lexus has worked hard on making sure that the roof is attractive even when it’s raised – not always a given with some cars, which can look rather tent-like. 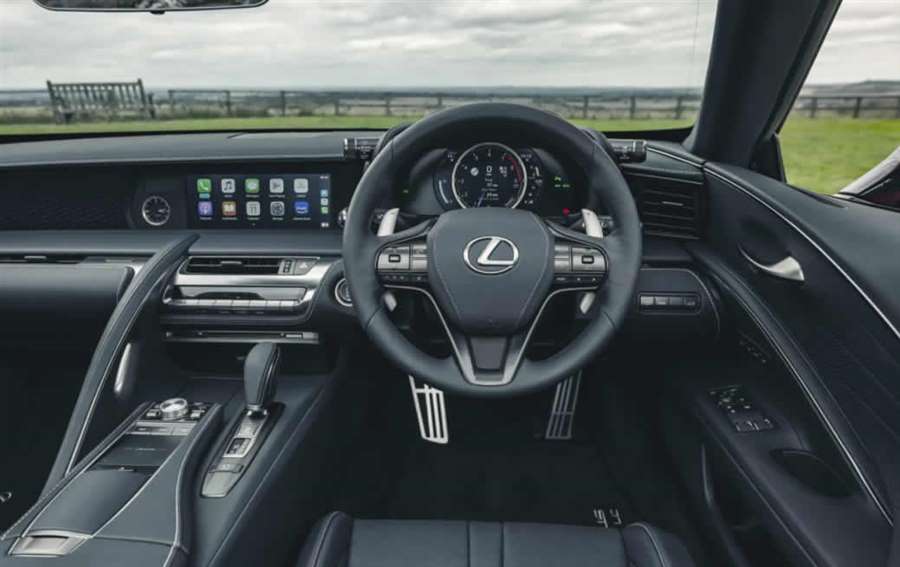 Only one engine option – but it’s a great one

While the standard LC Coupe is offered with a petrol/electric hybrid option (badged LC 500h) the Convertible doesn’t get this – the weight distribution would be thrown off too much by the heavy battery pack. Instead, Lexus only offers it in what it calls LC 500 form – that means a whacking great 5.0-litre V8 petrol with no hybrid assistance whatsoever.

It’s as old-school a combination as you can find these days. The engine puts its power to the rear wheels, and is unencumbered by turbocharger or supercharger. This means it feels purer – the response is beautifully crisp, and it only gets better as the revs climb. In fact, the engine’s full power isn’t accessed until you hit 7,100rpm.

The engine’s paired up to a ten-speed automatic transmission and rear-wheel drive, which provide effortless cruising when needed for long motorway slogs and a great deal of fun for the twisty bits in between.

Impressive interior – but not exactly spacious

You sit very low in the LC, in large, comfortable sports seats with loads of adjustment. And once inside, you’re surrounded by an interior only Lexus could have designed – with Japanese influence in its surfacing, and thought paid to its construction.

Though the LC Convertible does have rear seats, they’re not really intended to be used for passengers. Most owners will opt to see them as additional luggage space – useful, especially as the LC Convertible’s boot is smaller than most city cars.

Naturally there is plenty of luxury equipment, and the LC Convertible has been launched alongside a minor model change for the LC line as a whole – which means that both Coupe and Convertible now come with Apple CarPlay and Android Auto connectivity, a real boon for those who find Lexus’ aging and labyrinthine infotainment system worth avoiding.

The Lexus LC Convertible is a four-seater in theory, but it’s at its best when used as a two-seat roadster. The two front seats are excellent – they’re set incredibly low to the ground, making for a really comfortable yet focussed driving position with plenty of adjustability.

Lexus seats are typically a strong point and though the larger motorist might feel as though their bottom is a little pinched by the side bolsters, for most it’s effortlessly comfortable.

The driver certainly feels ensconced, surrounded by high sills to the windows – which doesn’t do much for visibility but certainly makes it feel more like the cockpit of a fighter jet.

The two rear seats… well, they exist, but ask a six-foot adult to sit back there and they’ll laugh. However, there are two Isofix child seat mounting points back there, making it possible that you could bring children along with you. You’ll need to be very mobile to belt them in, however, and we can’t imagine big, bulky baby seats will fit very easily either.

The rear seats are better treated as an extension of the boot space, though there’s no way to fold them down to allow for longer loads. At 149 litres in capacity, the LC Convertible’s boot is similar in size to the front trunk of a Porsche 911 Cabriolet. It’s rather wider and shallower, though – useful for fitting in a couple of carryon suitcases or several soft bags.

Neither the LC Convertible nor its coupe sibling have been tested by Euro NCAP for crash safety, but Lexus’ reputation for solidity and assurance extends to its safety record. Every Lexus model ever tested by Euro NCAP has received a full five-star rating, with the most recent ES saloon and UX SUV posting really impressive scores.

In terms of safety equipment, the LC Convertible is fully loaded regardless of which grade you choose. All models come with what Lexus terms the ‘Safety System +’ – a package of aids that includes adaptive cruise control, autonomous emergency braking, traffic sign recognition, lane-keep assist and automatic high beam headlights.

There are also eight airbags and blind-spot monitoring, plus pop-up bars that shield the occupants heads should the worst happen and the car rolls onto its roof (or lack thereof).

As befits a Lexus, the LC Convertible has an interior that’s distinctive in style. The overarching factor is how beautifully it seems to have been built – another Lexus hallmark. There are no rattles or creaks in here, no matter where you search for them, and material quality is high even in places you’re not likely to touch. Almost every surface is either leather or dense, expensive-feeling plastic. 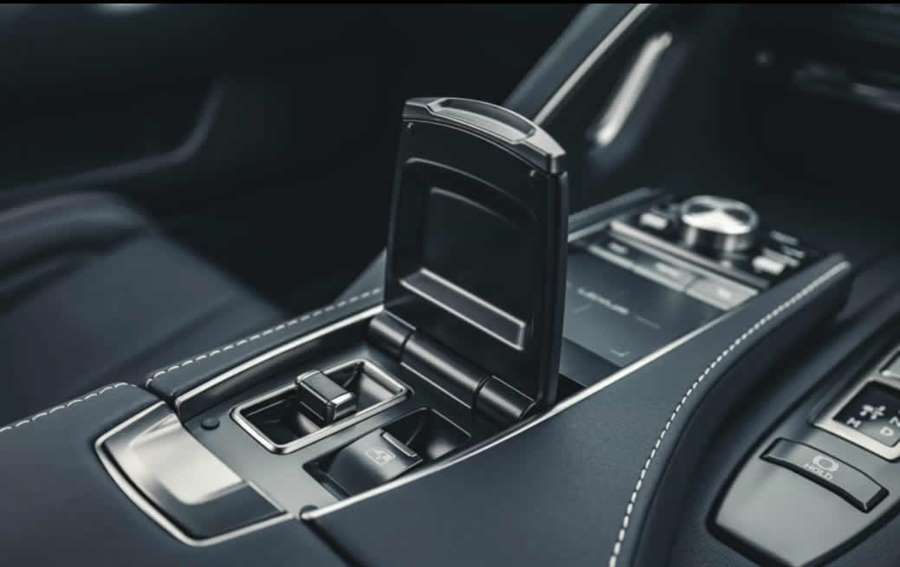 There’s a high-set centre console containing a tiered central stack – this holds climate controls and a large single air vent for the driver, while lower down there are nicely weighted controls for the stereo and a touchpad for the infotainment system.

Further up there’s a vertically-orientated panel that features a textured finish to keep things interesting, as well as a digital gauge cluster. Like all high-end Lexuses, this actually features a moving, physical bezel – depending on what you’re doing, it’ll slide over to make more room for sub-menus and controls. It’s daft, but high-end features intended to delight often are. The cluster itself is easy to read, though looking a little low-res next to the ultra-sharp panels fitted to cars such as the Audi R8.

There are no such complaints for the central infotainment screen, which is ten inches across and looks bright, colourful and sharp. Lexus’ own interface offers everything from sat-nav to trip data, but it’s confusing and difficult to navigate the menus – especially since it’s not a touchscreen.

Instead, Lexus demands you use the touch-sensitive pad by the gearlever to move a virtual pointer, like you would on a computer. It’s slicker than past efforts, but still torturous to use when inputting an address, for example.

Luckily, Lexus has finally bowed to public pressure and installed Apple CarPlay and Android Auto in the LC Convertible. These allow you to replace Lexus’ interface with one pulled directly from your smartphone. We found Android Auto worked well, and while you still needed to navigate with the pointer it was much easier simply to use Google’s voice control to accomplish most tasks.

There are two USB ports for charging and connecting phones, and they’re situated underneath the central armrest. Pull this armrest back a little and you’ll be able to flip up the palmrest ahead of it – underneath, cleverly concealed, you’ll find the controls for the roof.

Other storage space is somewhat limited, with a shallow central bin and thin glovebox. The door bins are adequately sized, though, and there’s a big cupholder conveniently situated ahead of the gearlever. Passengers also get a grab handle on the centre console, to keep them steady when the driver’s having a little fun.

Low-speed ride a little choppy
Irons out every bump when moving faster, though
Seats are excellent

With large wheels and the stiff suspension of the Sport+ model we tested, the Lexus LC Convertible can be a little unforgiving when driving around town. It’s far from unbearable, but those hoping for a cushioned ride around the city should probably look towards something like a Mercedes-Benz E-Class Convertible.

2020 Lexus LC Convertible - front trackingEnlarge0videoEnlarge14photo
When moving faster, that becomes much less of an issue – at the national speed limit, the LC floats over bumps almost as if they weren’t there. Absorption of road imperfections is aided by the excellent and supportive seats.