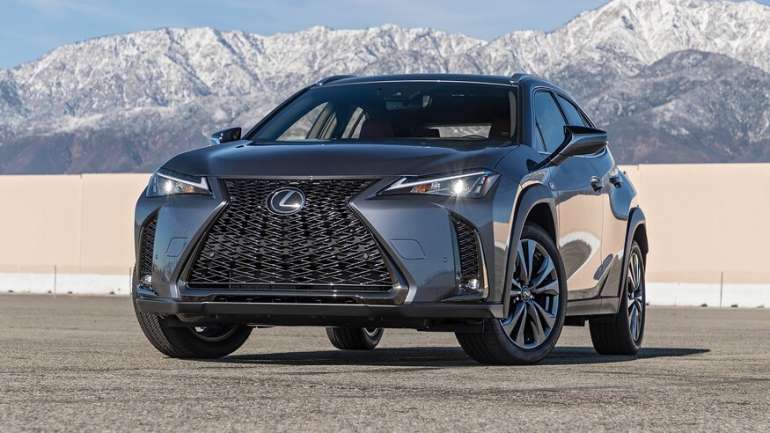 This compact luxury crossover isn’t the user experience we were hoping for.

Your phone, laptop, smartwatch, heck, even your smart speakers are all a massive pain in the neck. Not for you, but for the people who made them. User experience and interface designers agonize over products for months or even years to deliver an intuitive user experience, and you always notice when they haven't. It's the same story for cars like the 2021 Lexus UX200 F Sport.

Engineers spend countless hours working through endless permutations of designs so they can get the little things like the detent on that volume knob just right. It's all part of an endless quest to satisfy the user. So when we see the letters "U" and "X" arrive emblazoned on the rump of a small subcompact luxury Lexus SUV, the expectation is a satisfying user experience. The only problem is that isn't quite what the Lexus UX200 delivers. 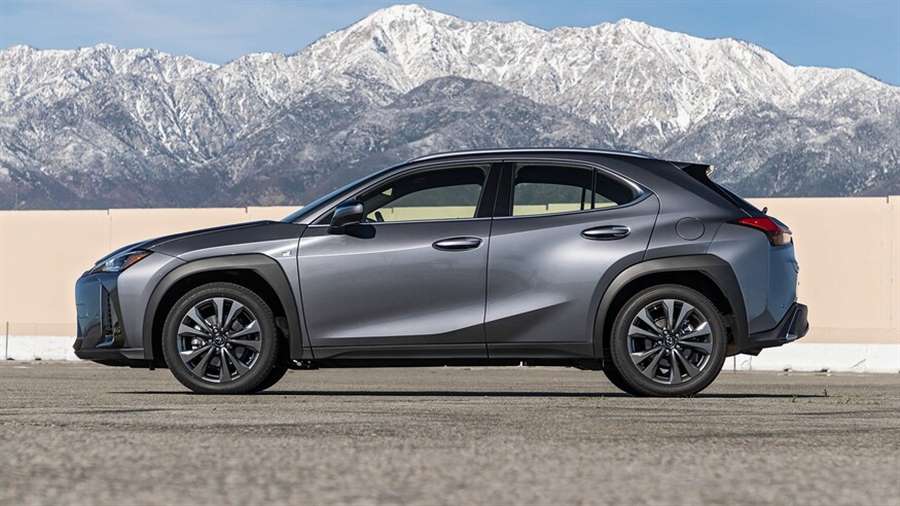 This miniaturized SUV belies both the quality and the satisfaction a Lexus badge normally promises, and the problems start with the UX's pee-wee powertrain. Its 2.0-liter I-4 makes 169 hp and 151 lb-ft of torque, which makes the Lexus one of the slowest vehicles we tested in 2020. At 8.9 seconds to 60 mph, it's slower than much less expensive compact SUVs such as the Mazda CX-30, the base Kia Seltos, and even the Hyundai Venue SEL (which makes 48 hp less).

Sometimes a car feels quicker in the real world than its test numbers would leave you to believe. Sadly, that's not the case here. The UX feels just as breathless on the road as it is on the dragstrip. Merging onto freeways or passing on open roads demands you bury your right foot into the carpet. At that point, the little four-banger shoots to its 6,600-rpm redline and stays there in a perpetual shriek that's about as enjoyable as using a sandpaper Q-tip. 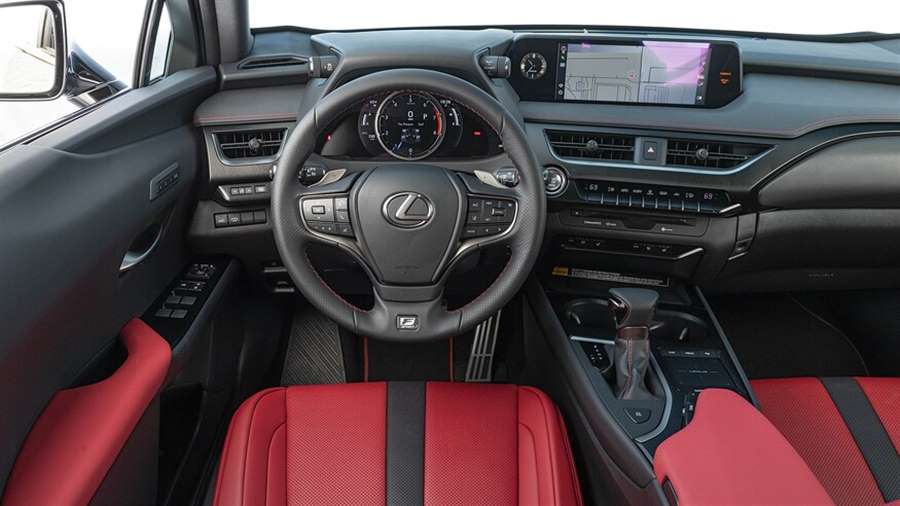 There are no two ways about it: This is a slow car, and despite the F Sport badge, there's little redemption when the going gets twisty. The UX's all-season tires give up grip quickly, and its 27.9-second figure-eight time at a 0.60 g average rank it near the bottom of all the vehicles we tested last year. The Mazda CX-9, a proper three-row SUV that weighs three-quarters of a ton more than the UX, logged a faster lap and a higher average g than the Lexus managed.

As for the UX, road test editor Chris Walton found the steering reasonably precise at the limit but bemoaned the UX's "10-speed" CVT, saying it was "slow to respond and kick down to a proper ratio." The transmission doesn't have "gears," as such, but it emulates a number of simulated ratios, and for most of my driving the CVT was in too low of a "gear," even in Normal mode. I resorted to putting the car in Eco mode for the majority of my driving just to keep the revs down and the engine-sound out of the cabin. 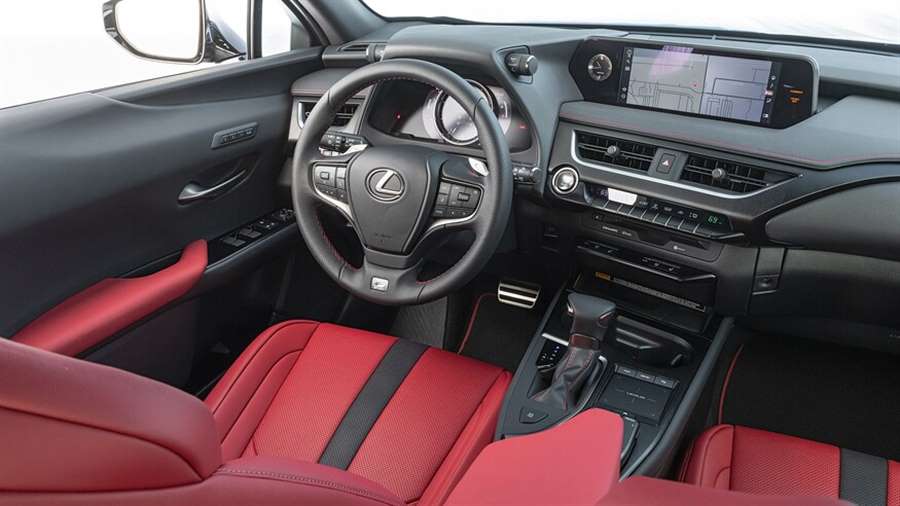 We noted issues with the throttle map on the previous UX we tested, but some software changes to the 2021 model have, thankfully, made the throttle response more linear and easier to modulate. Dynamically, though, that's the solitary bright spot for the UX, and it's not a particularly praiseworthy one.

Thankfully, the ride provides some relief from the lackluster powertrain of the Lexus. Over small lumps and fissures in the road, the UX can be crashy, but all in all, it rides well over most any surface and is more comfortable than rivals such as the Mercedes GLB and Jaguar E-Pace. A big part of that comfort is down to the excellent F Sport seats. They're supportive, heated, cooled, and trimmed in a luscious leather that makes spending time in them the best part of the whole car. 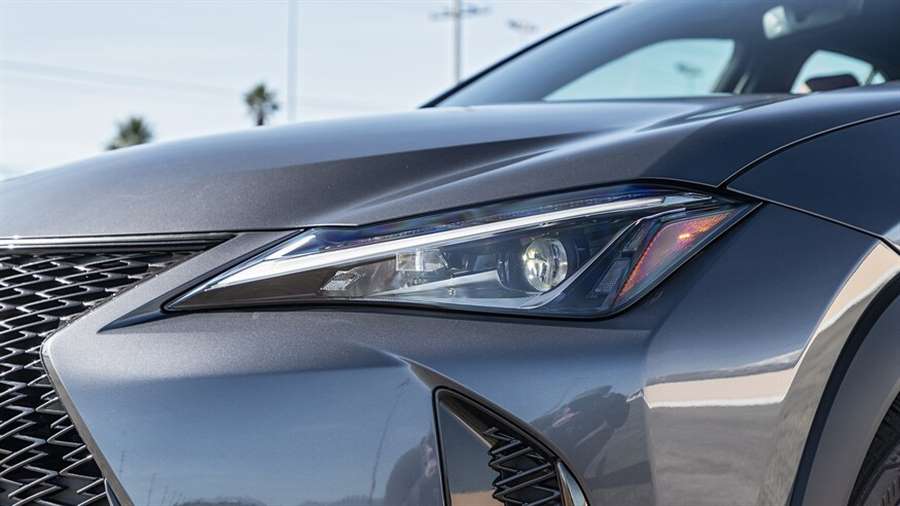 The rest of the interior, on the other hand, is largely where the user experience falls flat. One example: Just beneath the crisp, bright infotainment display is a well-organized row of HVAC buttons, but the option to turn the A/C on and off is buried under three menus. Plus, Lexus' finicky touchpad makes getting there difficult. Even after Lexus spent years refining and iterating on the system, it still isn't as intuitive or as accurate as the control knob offered by much of the German competition.

The volume knob is located on a funky, flat spar that juts out from the center console. It's supposed to be easy to use if your hand is resting on the lid of the console itself, and it's not necessarily a problem on its own. But once you have a passenger and their elbow takes up the exact position your arm needs to be in to use the volume knob properly, the illusion that this is somehow more intuitive or more interesting than a typical volume knob falls apart. That and the rest of the physical controls located on that spar become unusable.

The steering wheel is much too large for a car of this size, and even though the column is electrically powered, it doesn't telescope out far enough. The bit of plastic at the top of the instrument cluster creaked incessantly in our test car, and the screen resolution in the cluster itself doesn't hold a candle to the likes of Mercedes' MBUX and Audi's Virtual Cockpit. And then there's the excessive wind buffeting—even with both driver-side windows down, there's a literal tornado whipping around in the back of the cabin. You can mitigate it by lowering the rear passenger's side window, but at that point, you might as well be driving a convertible.

The rear cargo area only has 17 cubic feet of free space available (that's less than a Hyundai Veloster), and there's a middling amount of legroom and headroom available to second-row passengers. Now, I know what you're thinking. Here comes Johnny Auto Journalist, picking apart yet another SUV because we are taught to hate them. But you'd be wrong. There are plenty of SUVs, compact or otherwise, that we genuinely love.

On its face, the UX200 should be an appliance, a generalist automobile that takes you from A to B without hassle. Like your smartphone, it should be pleasant to use when you need it to be and out of your way when you don't. Lexus' quest to make it an "experience" with its, erm, eye-catching exterior looks and fussy interior design has only packed it full of compromise.

The user experience that I talked about earlier, the one that designers and engineers fret over, the one that separates good products from bad ones, simply doesn't excel here. The UX is inconvenient at its best and downright irritating at its worst, and for $41,655 there is no way to justify it.