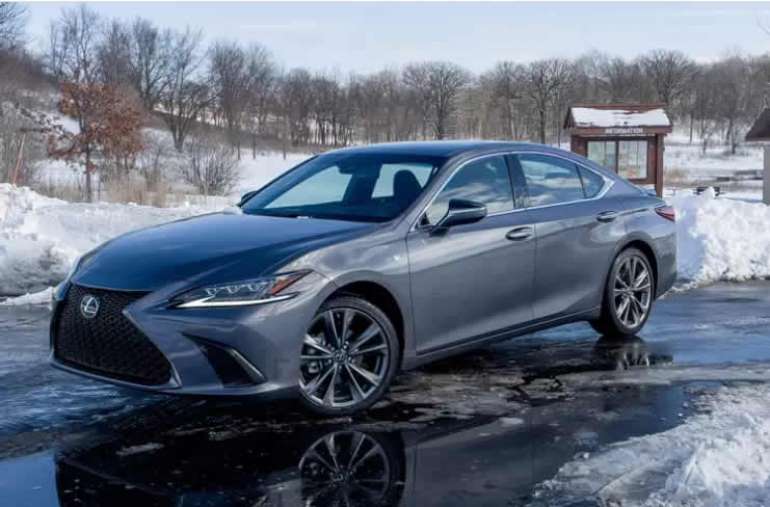 The verdict: The 2021 Lexus ES gets all-wheel drive for the first time, though it might not be what you’d expect: Four-wheel traction is paired only with a noisy, modestly powered four-cylinder engine.

Versus the competition: With disappearing competition, the ES remains one of the last large, affordable luxury cars on the market that isn’t hellbent on being sporty.

The 2019 redesign of the Lexus ES made it a more accomplished luxury car with a higher-quality interior and improved isolation from road and wind noise, but that wasn’t the end of the updates for the ES: For 2021, Lexus has added a gas-only four-cylinder model, called the ES 250, that brings all-wheel drive to the party for the first time. Strangely, it’s not really appropriate to call the four-cylinder a “base” engine, because the ES 250 with AWD has a starting price identical to the front-wheel-drive-only V-6 ES 350, at $41,025 (all prices include destination charges). 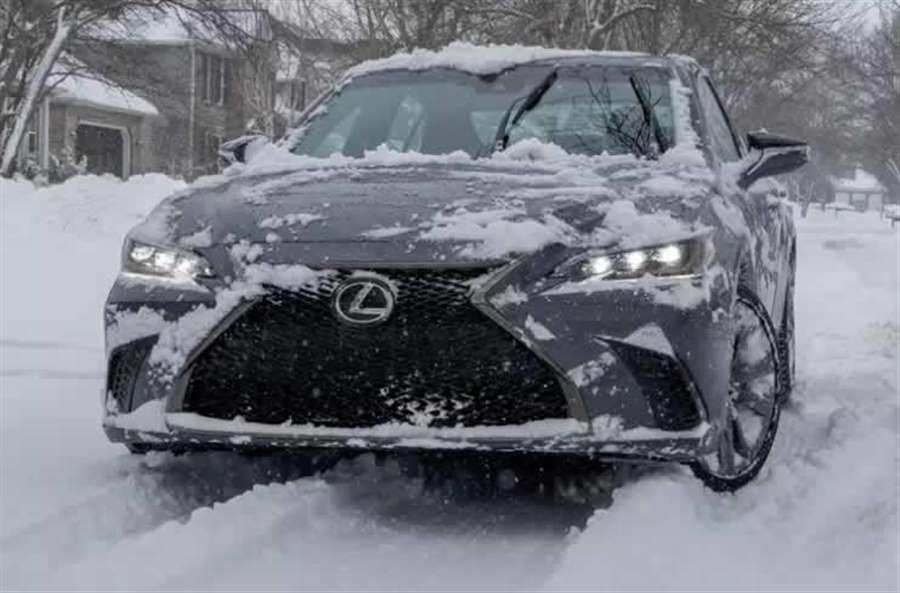 The ES faithful will find this newest AWD, four-cylinder variant very different from what they’re used to, but the ES faithful may not be the market for the new version. Mid-size luxury sedans aren’t exactly a hot ticket right now, as luxury and non-luxury automakers alike have increasingly turned their focus to SUVs. The ES 250 may instead serve multiple consumers: buyers looking for SUV-like all-season capability in a familiar sedan package, and those looking for an alternative to the discontinued Lexus GS, which was previously Lexus’ sportier mid-size sedan. (The ES F Sport variant will be the best bet for these shoppers.)

All-wheel drive is new for 2021, but it’s only available with the also-new 2.5-liter four-cylinder engine that makes 203 horsepower and 184 pounds-feet of torque. Strangely, the ES 350’s accomplished and refined 3.5-liter V-6, which often overpowers the front tires on that car, can only have front-wheel drive. The ES 250’s power is a bit underwhelming for a 3,780-pound sedan — a Toyota RAV4’s power-to-weight ratio is more favorable. In my experience, though, the Lexus’ eight-speed automatic transmission reacts more quickly while passing than in similar front-wheel-drive Toyota/Lexus applications, so the four-cylinder doesn’t feel underpowered. It’s not as rewarding an experience as you get from the base turbocharged four-cylinders in the BMW 3 Series or Audi A4, and the ES 250’s grainy-sounding four-cylinder is unbecoming of the otherwise buttoned-up sedan. 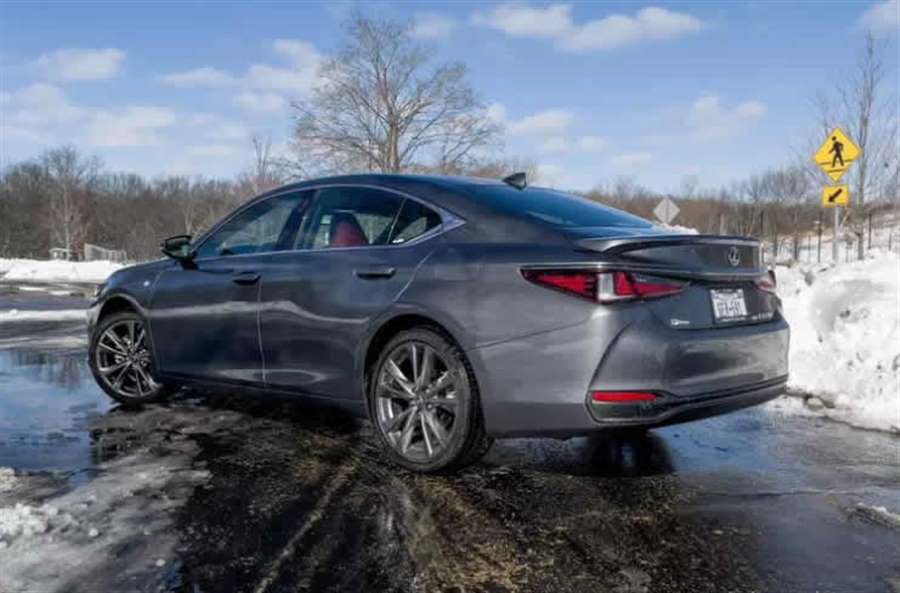 In other cars, Toyota’s 2.5-liter is a commendable engine with surprising torque and linear power delivery, but it seems mismatched in the ES thanks to its rough soundtrack. Both during moderate acceleration and near redline, the engine wheezes through its powerband. That’s less of an issue in the non-luxury setting of parent-company Toyota’s cars and SUVs, where this engine more frequently appears, but it stands out in the Lexus. Competitors’ turbocharged four-cylinders don’t have to rev as high or as frequently, and turbos — driven by exhaust gases — act as an additional muffler to help hide ugly engine sounds. The Lexus is not turbocharged. 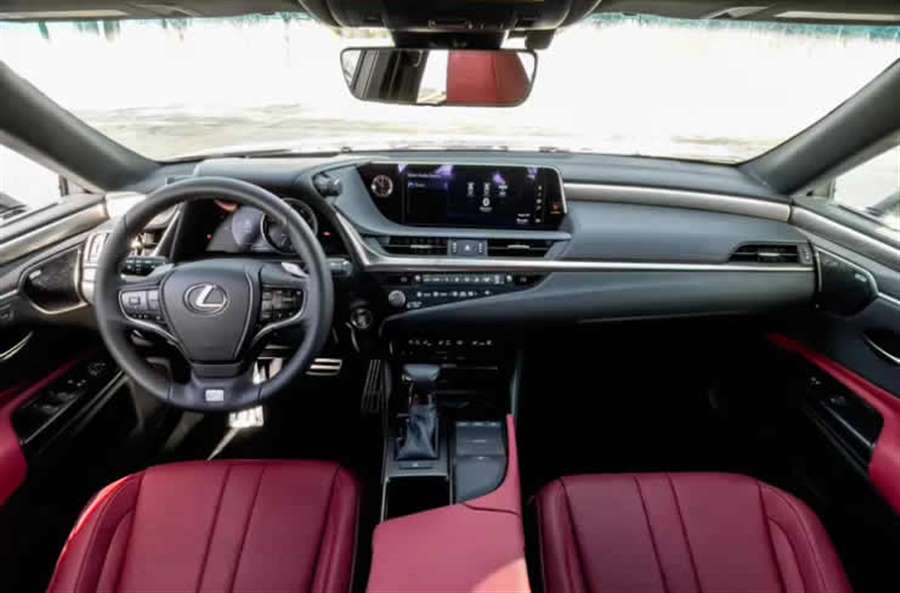 The second attribute making the ES 250 unique is its new all-wheel-drive system, which can direct as much as 50 percent of the engine’s torque to the rear wheels for traction. I put the ES 250’s AWD to the test during a snowstorm that dumped 8 inches of snow overnight, burying the Lexus to its rocker panels in wet, heavy snow. The ES did its job clawing out of my uncleared driveway and unplowed neighborhood streets, all the way to a major street that had been plowed — and that’s really all this kind of system needs to do.

It wasn’t flawless, though. The snow scraped the car’s underbelly thanks to its sedan ground clearance, and it hesitated briefly when accelerating from a stop as the all-season tires spun for grip. It was slowed by its traction control system, but the ES eventually gained steam without having to change drive modes or disable traction control for more wheel speed.

The ES 250’s all-wheel-drive system is a now-common type with front-to-rear torque transfer and the ability to decouple for increased fuel economy. It’s the same type you’ll find on the related Toyota Avalon and smaller Toyota Camry, but it’s really more similar to the AWD systems you’d find on small SUVs — not so much a performance-minded luxury sedan. The Acura TLX, for example, has a mechanical torque-vectoring rear axle for on-road dynamics, and the discontinued Buick LaCrosse was an odd host for impressive dynamics with its twin-clutch torque vectoring rear axle (RIP). The ES 250’s system does little, if anything, for on-road performance driving — but it isn’t much needed, considering that on dry roads the less-powerful four-cylinder mitigates the ES 350 V-6’s power-on-traction disadvantage anyway. 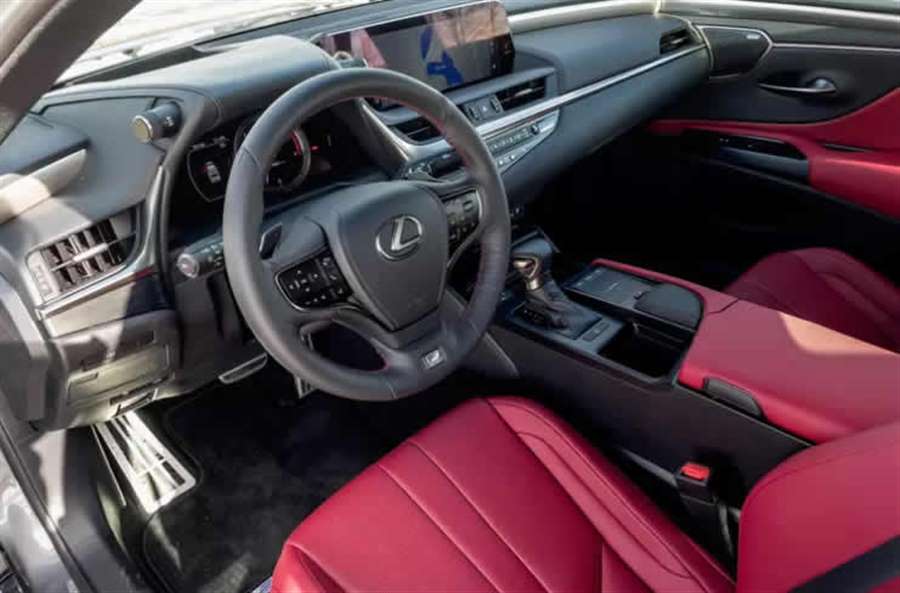 Other than driveline, much of the ES 250 AWD is unchanged from the ES 350. The same is true of the 250 F Sport I drove, which uses the same wheels, tires and suspension tuning as the 350 F Sport, though the ES 350 F Sport is also available with an optional adjustable firmness suspension. The ES F Sport has a taut ride with more road feel than previous generations, but it’s not offensive or uncontrolled. It’s firm enough, however, that you’d best pass up the F Sport if you’re looking for the classic ES ride quality. The ES F Sport is essentially a proficient handling package, but it’s still not as eager to drive spiritedly as the outgoing rear-wheel-drive Lexus GS F Sport. That said, it also doesn’t crash over rough roads like other F Sport treatments (on the Lexus RC, for example), where large impacts shudder through the whole chassis. As a whole, the ES F Sport is quite livable.

What hasn’t changed with the new engine and all-wheel-drive system is the ES’ generous occupant and cargo dimensions for the price, though it doesn’t have a folding backseat like the related Toyota Avalon. The ES is considerably larger and more comfortable than a BMW 3 Series, Audi A4 or Lexus IS. In fact, few remaining competitors match the ES’ price-to-size ratio. The Buick LaCrosse used to, but it’s gone now. The previous-generation Genesis G80 was close, until its pricing ballooned with its 2021 redesign.

What’s left? The Cadillac CT5 (formerly the CTS) is a compelling alternative that has some of the comfort vibe of the ES, but with more balanced ride and handling and without having to splurge for an additional performance suspension option. The last CT5 I tested had the optional 335-hp, twin-turbocharged 3.0-liter V-6 with all-wheel drive, which Cadillac says goes from 0-60 mph in 4.9 seconds; as-tested, it stickered at $52,155. The ES 250 F Sport with AWD that I tested for this review cost $53,400, but it had a lot more advanced driver-assist tech than the CT5. The ES comes standard with full-speed adaptive cruise control and lane centering, and all trims except the base model have blind spot monitoring with rear cross-traffic alert.

Little else on the ES has changed since 2019, which means it has a commendably rich interior for its price; it showed off well in our test car’s red interior. I can’t say the same about the CT5. The ES, however, remains saddled with a touchpad-based multimedia and control system — no touchscreen. The available 12.3-inch screen is at least high resolution, and it includes Apple CarPlay and Android Auto. It’s easy to view while driving, if hard to control. Lexus may be at a turning point, however, as the RX SUV received a well-done touchscreen for 2020 without a major redesign to the whole car, which means there’s hope yet that this major sticking point will be resolved with an update in the (near?) future.

If you have good snow removal — or little snow — and flat ground, a FWD ES 350 with good tires (all-seasons rated well in snow or dedicated winter tires) will most often be fine. All-wheel drive is most useful in deep snow or on roads/driveways with inclines. If you don’t need AWD, there’s little reason to consider the four-cylinder ES, given it’s not less expensive, it’s considerably pokier and louder, and its AWD doesn’t make the ES a more engaging sports sedan on dry roads. What it does do, however, is make the ES more appealing to a crowd that would otherwise be looking at an SUV. There’s comfort knowing you’ll be ready for just about any weather condition, and the ES 250 starts a full $5,000 less than a comparably sized mid-size Lexus RX SUV.

As for its qualifications as a GS 350 replacement, the AWD ES 250 is pretty far off. There’s no hope on the horizon for GS loyalists, either, as a Lexus spokesperson says there are no plans to add AWD to the ES 350 in the near future.