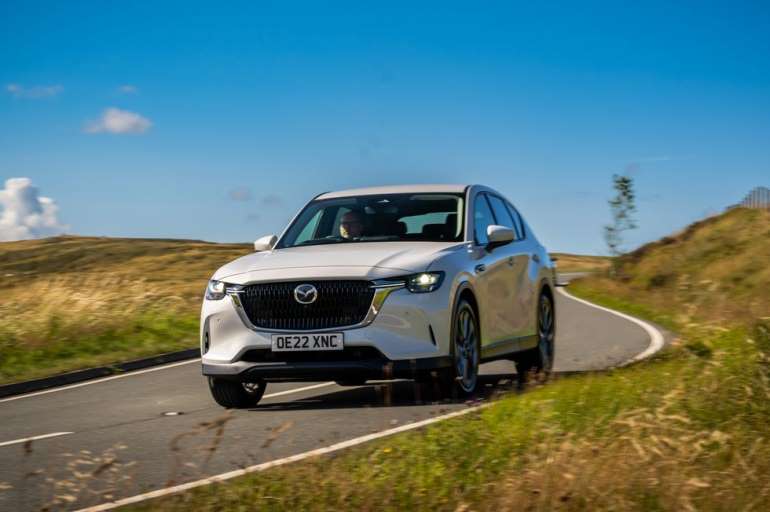 Sitting on Mazda's new Skyactiv scalable architecture, the CX-60 is the first in a series of longitudinally engined SUVs intended to move the brand positioning closer to premium rivals. The CX-70 will be wider and, we're told, styled with American tastes is mind—meaning it should possess more visual presence than the somewhat timid-looking CX-60, which is roughly the size of a BMW X3.

However, we have nothing but praise for the quality and style of the CX-60's cabin, which Mazda says contemporary Japanese design has inspired. Our sample car, in the plushest Takumi specification, featured wood door trim, a dashboard faced with woven fabric, and shiny metal accents that seemed inspired by the fenders of a '50s Cadillac. Digital instruments and a 12.3-inch central display screen are standard, but the CX-60 keeps conventional HVAC controls, and the CX-70 likely will too. Strangely, although the large display supports touch input when running Apple CarPlay or Android Auto, it doesn't for Mazda's native navigation system, which still needs to be commanded through the click-wheel controller.

Being a Mazda, there is plenty of powertrain innovation. The base powerplant, which has yet to arrive in Europe but should be in the U.S. CX-70 at launch, will be a naturally aspirated 3.0-liter inline-six that uses variable compression and foregoes the turbocharging that has become all but standard in this part of the market. In Europe, the CX-60 will also be offered with a new 3.3-liter e-Skyactiv D diesel-six—for which Mazda is targeting an impressive thermal efficiency of more than 40 percent—but this is highly unlikely to make it to the States. Power and torque ratings have not been revealed.

The car we drove was fitted with the least exciting new powerplant, although the most innovative one. This is a plug-in hybrid, Mazda's first, and we anticipate it will be offered in the CX-70 as well. It uses the 188-hp 2.5-liter four-cylinder from the CX-5 in conjunction with a 173-hp electric motor that sits between the engine and a new eight-speed gearbox.

The transmission uses an electronically controlled clutch pack rather than a torque converter to aid low-speed efficiency, and the same gearbox is set to be offered with the six-cylinder engines. Total system output for the PHEV is 323 horsepower, with a 17.8-kWh battery pack able to deliver up to 39 miles of EV range under Europe's generally optimistic WLTP testing protocol. While an impressive figure, that's still short of the Euro-cycle EV range results for the Toyota RAV4 PHEV or the Volvo XC60 Recharge T8 Extended Range PHEV. The Mazda's battery can be fully recharged from 240-volt Level 2 equipment in a claimed two hours, 20 minutes or, alternatively, topped off courtesy of the engine burning extra gasoline.

Under electric power, the CX-60 PHEV is smooth and refined. The motor drives through the gearbox, so there is the unusual (for an EV) sensation of gears shifting, and there is enough urge to keep ahead of urban traffic. But the transition to combustion power is less elegant, even using the blended Hybrid mode, with a noticeable pause as the four-cylinder fires up. As in the CX-5, the 2.5-liter is not a charismatic companion, growing loud and sounding increasingly coarse when worked hard. Although the redline is 6500 rpm, the engine already feels tight and reluctant at 5500 rpm. Once everything is pulling, acceleration is strong—an estimated low- to mid-five-second 60-mph time should make this the brand's quickest car since the RX-7. But it seems likely the six-cylinder gasoline engine will be much more of an experiential highlight.

Fortunately, the chassis is more satisfying than the engine, combining compliance and athleticism in the finest Mazda tradition. The CX-60 resists understeer well for a vehicle of its size and shape, although there is little sense of the rear torque bias Mazda claims for the PHEV's all-wheel-drive system. Ride quality is on the firm side but stayed acceptable even when riding on the (largest available) 20-inch wheels, with body control staying tight during hard cornering.

While the CX-70 will be a different car—as will the related CX-90—our first impression of Mazda's new architecture is positive. And although the company's first plug-in-hybrid system is less impressive, we are still very much looking forward to experiencing the new straight-six engine.

Tagged under
More in this category: « 2023 Mazda CX-50 Review: Looks Aren't Everything