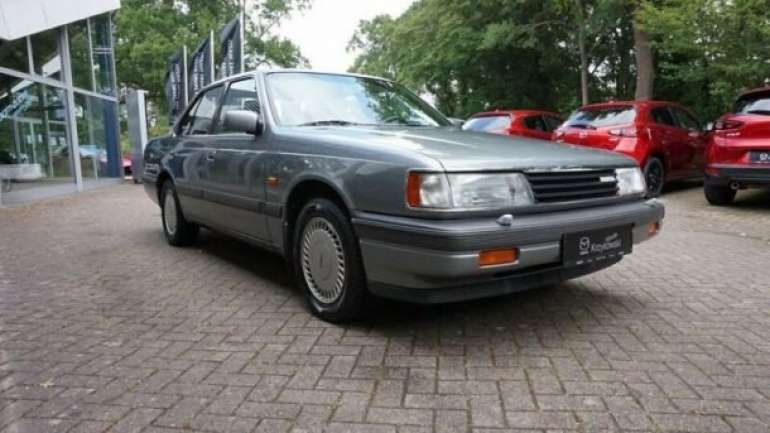 Today marks the second time a Mazda 929 will grace us here at Rare Rides. Late last year we featured the successor to today’s car, a pristine 929 from 1992. That smooth sedan had frameless windows, rounded shapes everywhere, and was designed specifically with the North American market and Lexus customers in mind.

Let’s take a look a the much more conservative luxury sedan Mazda designed before Lexus existed.

The car North America called 929 was known in its home market as Luce. Dating back to its debut in 1967, the Luce was Mazda’s flagship. A smaller manufacturer, Mazda did not field a full-size sedan for some time. Available in coupe, sedan, and wagon formats, the Luce remained mid-size through the ’77 model year. For ’78 the LA4 series Luce grew into a larger executive car, leaving the midsize segment to the Capella (626). In its new larger form the Luce coupe went away, and the model’s three-body lineup was maintained via a standard sedan, hardtop sedan, and a wagon. The market segment of the departed Luce coupe was filled from that point onward by the Cosmo.

The LA4 generation didn’t last for long and was replaced by the HB for 1982. Once more the Luce grew in size. Reflecting future trends early, there was no more wagon in the HB generation, only a sedan and hardtop. The hardtop HB had a very interesting front end treatment, by the way. HB had a good run and remained in production through 1986. The Cosmo continued on the HB platform through the rest of the Eighties, and HB was the last time the two cars shared underpinnings.

For model year ’87, HB became HC, and the Luce experienced another growth spurt. Again available in sedan and hardtop guises, the Luce/929 was sold in two sizes. Hardtop versions were longer and wider, at 194 inches and 67.9 inches, respectively. Standard sedans were 184 inches long, and 66.7 inches wide. Though traditional in its form, Mazda saw fit to offer a zesty Wankel engine in addition to standard I4 and V6 power. Inline-fours were of 2.0- or 2.2-liter guises. There was also a tiny 2.0-liter V6, and (in North American examples) a 3.0-liter V6. Notably, the J-series engine was the first V6 Mazda produced. The rotary option was a 13B, a twin-rotor 1.3-liter mill which was not offered in North America. Some Luce trims were in fact more luxurious than the 929 offered in America, as Mazda reserved its rotary power, adjustable suspension, and console refrigerator for the home market.

Mazda saw fit to import only the sedan to North America, feeling no need to come with hardtop length. Canadians had more options than Americans eh, as they received a standard Winter Package on their 929s. That meant a tougher alternator, winter tires, wipers that didn’t hide themselves under the hood, and heated seats. The vast majority of North American 929s were automatic, but a five-speed manual was theoretically available.

The most notable change in the 929’s timeline on these shores was the addition of the S trim for 1990. The 18-valve SOHC engine was upgraded to DOHC, and 24 valves. Performance and fuel economy both increased with this upgrade; horsepower jumped from 158 to 190. S also added two-tone paint and excellent lace alloys.

The 929 was too dated, too traditional, and a slow seller. Mazda got the most mileage out of its new V6 in North America via the very interesting rear-drive MPV. The 929 was replaced with the previously featured generation in 1992. Worth noting, Koreans absolutely loved the HC 929. Once Mazda stopped building it, they sold the design to Kia. Kia did a light front and rear rework and sold it as the Potentia from 1992 until 2001. The 929-cum-Potentia’s base 2.0-liter engine also saw use in the first generation Kia Sportage for many years.

Today’s Rare Ride is located in Germany because Americans can’t take good pictures when they have a 929 for sale. This V6 asks $10,500.