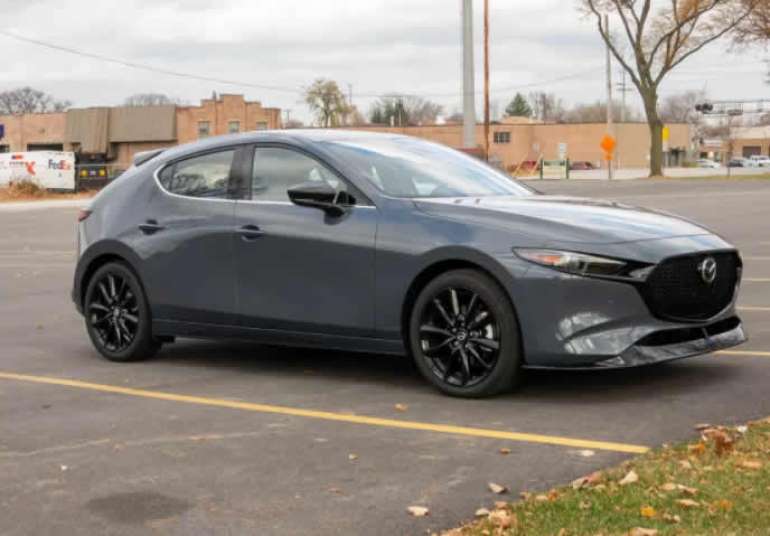 Endowed with the model’s first turbocharged gas engine since the Mazdaspeed3 left showrooms early last decade, the 2021 Mazda3 can muscle past slower traffic with little effort — a commanding, if reserved, degree of performance that should raise the car’s appeal among Mazda fans. Still, broader obstacles remain for mass-market audiences.

The Mazda3 is among the most fun-to-drive cars in its class, and a new engine only furthers that strength. But for daily driving, many competitors are easier to live with.

As before, the 2021 Mazda3 is available as a sedan or hatchback, with standard front-wheel drive or optional all-wheel drive. Last year’s four-cylinder engine carries over for most models, but Mazda bookends it with two new ones: a smaller four-cylinder in base trim sedans, and the turbocharged four-cylinder in high-end sedans and hatchbacks. 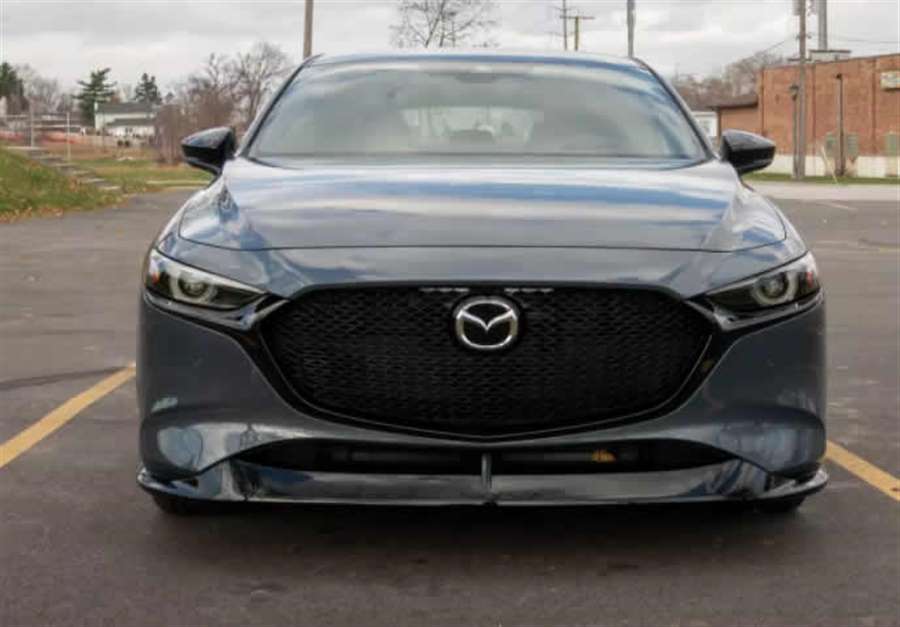 Seven trim levels (base, S, Select, Preferred, Premium, Turbo and Turbo Premium Plus) run the gamut from the low-$20,000s to the mid-$30,000s with factory options; automatic transmissions come on all except the Premium hatchback, which is available with a manual. Stack the gang up here, or compare the 2020 and 2021 Mazda3 here.

We drove a Mazda3 Turbo Premium Plus hatchback, though we’ve also evaluated the current generation, both in sedan and hatchback form, with the mid-level engine.

Powered Up
Although we haven’t tested the base engine, its limited availability means just a sliver of shoppers will buy it. Most Mazda3 examples are likely to have the 2.5-liter four-cylinder, which was the only engine available in the 2019-20 Mazda3. It’s a capable, smooth-revving engine, though tall gearing from Mazda’s six-speed automatic transmission limits some of its potential. Accelerate from a stop up to highway speeds, and it’s a long climb through 2nd and 3rd gear — but if you hit the gas while already in motion to tack on more speed, the same automatic readily downshifts without undue delay. You hate it, you love it.

I’ll get to the turbo four-cylinder in a moment, but first some context on how it stacks up: 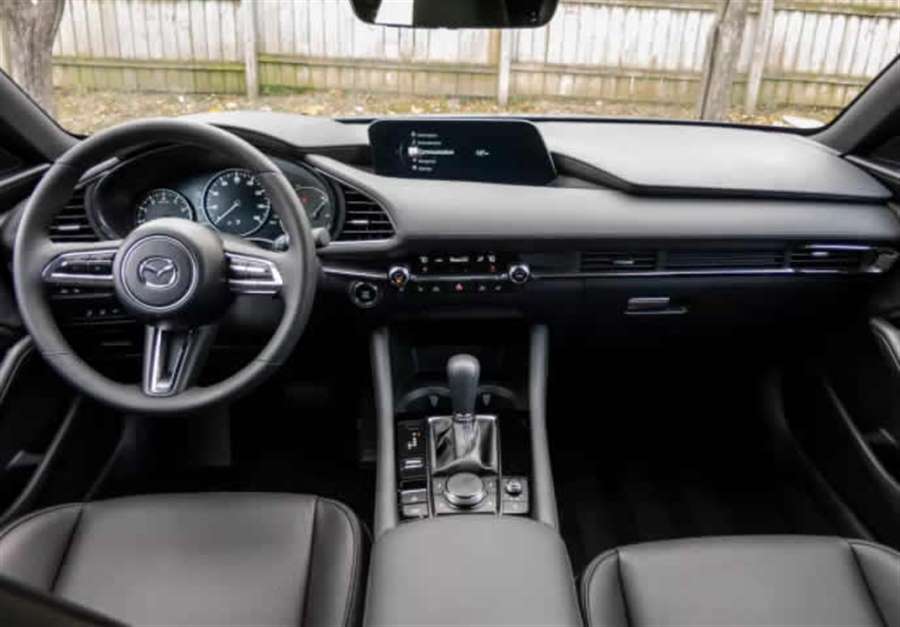 Our test car came filled with 93-octane premium fuel, according to the fleet company that dropped it off. In any case, the drivetrain behaves in some respects like a diesel engine, with torque aplenty for vigorous starts but modest power progression once you get past 4,000 rpm or so. It’s not quite a plateau — some additional power still comes if you rev it out — but the drivetrain feels best suited to muscle past slower traffic as you apply steady gas, as opposed to flying around near redline with your foot to the firewall. Accelerate while already in motion and the transmission resists downshifts notably more than with the non-turbo 2.5-liter, but the Mazda3 Turbo’s vast torque and responsive accelerator absolves it.

Ride and Handling
Our impressions from when we first drove the current-generation Mazda3 still stand, which is to say ride quality is polished but firm. Although the suspension employs a cheaper torsion beam setup in back — as opposed to the independent rear suspension offered on previous generations of the Mazda3 — the chassis maintains good body control and clean, reverb-free shock absorption. But tuning is decidedly firm and probably more than what most compact-car shoppers will tolerate. Mazda cites a retuned front suspension with stiffer springs for the Turbo, and it does little to change the car’s character; softer-riding rivals like the Nissan Sentra, Toyota Corolla and Volkswagen Jetta seem better suited for the daily grind. The Mazda3 improves on the Honda Civic’s perpetual bounciness, but that isn’t saying much. Mazda shouldn’t wait for a full redesign to revisit suspension tuning.

Like the Civic, the Mazda3 redeems itself on the handling front, perhaps even more so in the Turbo. Mazda claims the AWD system on Turbo models can distribute more torque to the rear wheels, and the car indeed feels more neutral around sweeping corners than its non-turbo sibling. You can slide the tail a touch with aggressive mid-corner gas, something the non-turbo Mazda3’s AWD all but prohibited, and understeer remains well contained throughout.

Mazda claims retuned steering hardware for sharper response on all Mazda3 variants for 2021. The ratio still isn’t as quick as some rivals’, but feedback remains very good. Flinging the Mazda3 around cloverleaf sweepers is a lively, communicative experience — an increasingly rare quality these days, even among sporty cars.

Interior and Tech
Cabin materials in the well-equipped Mazda3 we evaluated were exemplary for this class. Mazda’s optional leather upholstery would feel at home in any entry-level luxury car — cloth and leatherette (imitation leather) are also available — and generous padding covers the armrests and areas your knees touch. Controls feel meticulous all around, and most surfaces — save a low-budget headliner — appear universally rich. Impressively, the backseat sees little drop-off in materials quality, a widespread practice among Mazda’s rivals.

In contrast to all that, the Mazda3’s multimedia system remains a weakness. It constitutes a high-mounted dashboard screen measuring a healthy 8.8 inches diagonally, but the ultra-wide aspect ratio limits overall display size with just 3 inches of screen height. Apple CarPlay and Android Auto come on all but the base sedan, and CarPlay leverages the screen’s full width, but the backup camera does not. What’s more, the screen isn’t a touchscreen — not that such functionality would help much, as it’s mounted too far forward to easily reach — and requires a knob-based controller behind the gear selector. For straightforward user-friendliness, that’s a step backward; the related Mazda CX-30 SUV has the same system, and it ranked last for usability of controls in a recent four-car comparison we conducted.

Seating and Cargo Space
Craftsmanship notwithstanding, the Mazda3 isn’t particularly roomy or easy to see out of. The driver’s seat sits relatively low to the ground, and larger drivers will no doubt find the space narrow between the center console and doors. The hatchback blocks over-the-shoulder views with giant roof pillars and a tiny rear window; the sedan has mercifully thinner pillars, though rear glass is still undersized. 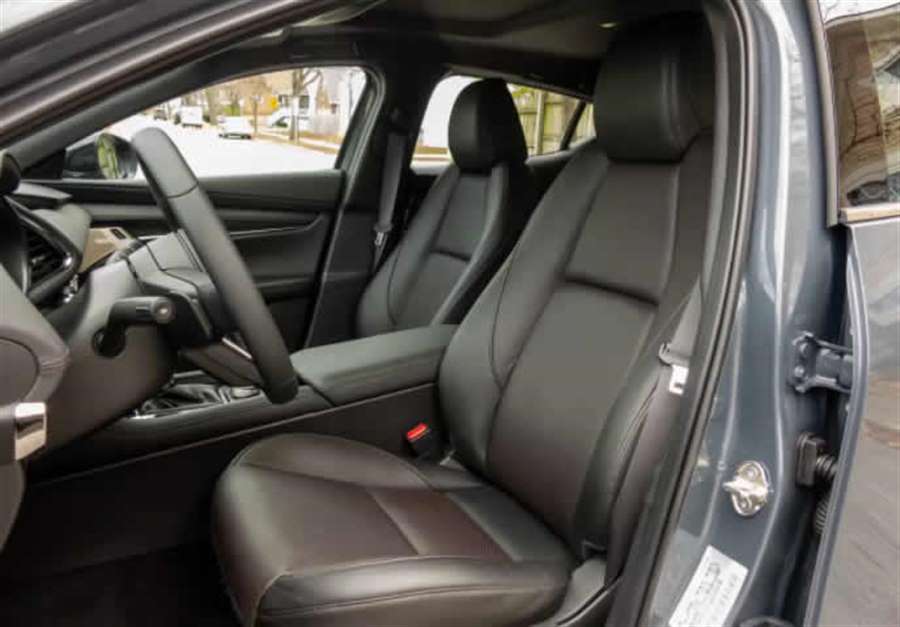 Backseat knee clearance is tight, and we measured a modest 13.1 cubic feet of cargo volume behind it. That’s through Cars.com’s independent cargo measurements, not manufacturer-advertised specs, which we’ve found unreliable. Versus the Mazda3 sedan, the hatchback carries inherent advantages to maximizing cargo space when you fold the backseat down, but for those who need to carry passengers and cargo, the sedan may have considerably more room. Although we didn’t have access to a 2021 model-year sedan to measure cargo space with our latest methodology, we found the current-generation sedan’s trunk roughly a third deeper than the hatchback’s cargo area — with similar width and height to the tops of the seatbacks — when we tested both body styles two model years ago. (There is more space above the backrests in a hatchback, but loading above this height compromises cargo containment and rearward visibility, both safety hazards.)

That’s not surprising. Indulge me a minute on this: Manufacturer-stated cargo specs usually employ separate methodology between hatchbacks and sedans, rendering spec comparisons tenuous at best. The Mazda3 hatchback isn’t necessarily an outlier, with as-tested cargo volume similar to that of most entry-level SUVs in our recent comparison. But you’ll find more cargo volume in many sedans, and less in many hatchbacks and SUVs, when measured the same way — which is to say, up to the tops of the seatbacks. With apples-to-apples methodology, the current Civic, Sentra and Corolla sedans have some 40-50% more usable cargo volume than a Mazda3 hatchback.

Should You Buy a Mazda3?
With the base 2.0-liter four-cylinder, the Mazda3 starts at $21,445 with destination, which is competitive for the class. Standard features include the automatic transmission, 16-inch alloy wheels, one-touch power windows all around and the 8.8-inch multimedia system, albeit without CarPlay or Android Auto. Also standard are stop-and-go adaptive cruise control, lane departure warning with steering assist, and forward collision warning with automatic emergency braking. The well-rated AEB helped the 2020 sedan and hatchback both earn top ratings from the Insurance Institute for Highway Safety, but IIHS has yet to publish ratings for the 2021 model as of this writing. When available, the 2021 report and its changes, if any, can be found by searching for “Mazda 3” here.

Those who want the Mazda3 Turbo will shell out at least $30,845 for the sedan, with the hatchback running another $1,000. Turbo models with the Premium Plus addition (leather, Traffic Jam Assist and the safety extras, in-dash navigation and more) edge close to $35,000, with prices spiraling past that once you add premium paint and various cosmetic enhancements. That kind of money falls somewhere between performance mass-market compacts and entry-level luxury sedans.

As such, there’s a Mazda3 for many performance thresholds. A few years into its fourth generation, Mazda’s least expensive car remains a fun-to-drive choice among compact sedans and hatchbacks. The turbo engine extends the spectrum, though it doesn’t change the nameplate’s limited appeal for left-brained shoppers. As I said when the current generation arrived on scene for the 2019 model year, the Mazda3 seemed destined for niche appeal. The Turbo does much to add appeal — less so to expand the niche.