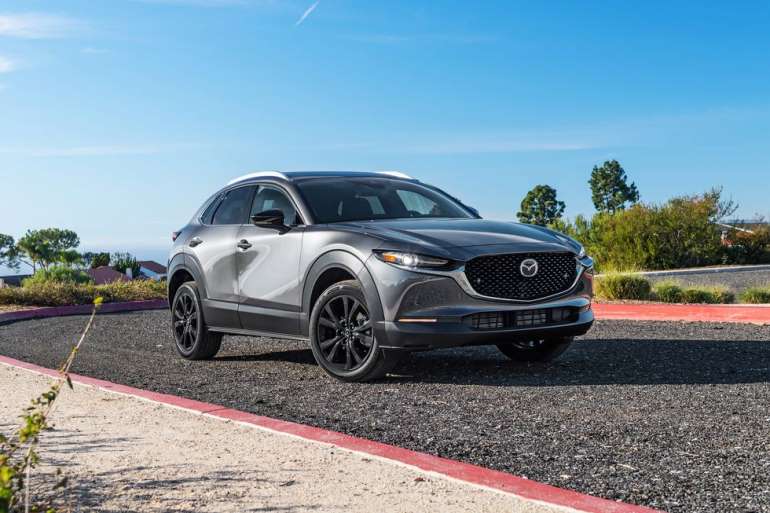 Think of the Mazda CX-30 as a Mazda 3 hatchback on stilts. If you're picturing an upscale subcompact crossover, you're on the right track. Both vehicles are built on the same platform, have common design elements inside and out, and share their polished road manners. Drivers of the CX-30 sacrifice some handling responsiveness for its (slightly) taller seating position, but the connected feel from behind the CX-30's steering is class leading. Until now our only complaint centered around a lack of power since the CX-30 came with a merely adequate naturally aspirated 2.5-liter inline-four with 186 horsepower. Mazda is fixing that with a more powerful turbocharged engine in the new-for-2021 2.5 Turbo trim level. 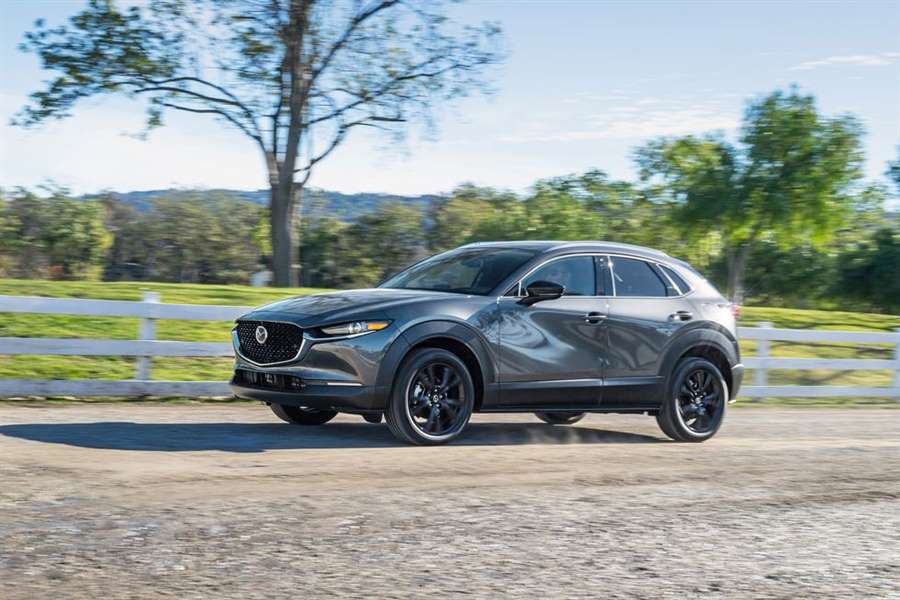 The CX-30's turbocharged 2.5-liter inline-four is already in every other new Mazda model save for the Miata and the tiny CX-3 crossover. On premium fuel, output is a stout 250 horsepower and 320 pound-feet of torque. Feed this turbo-four regular and its figures drop to 227 horses and 310 pound-feet, but those are still vast improvements over the standard 2.5-liter four in our long-term CX-30. The new engine and its associated hardware add about 120 pounds to the SUV's curb weight and contribute to a mere 1-mpg drop in its EPA combined fuel economy, 25 mpg versus 26 for a comparable model with the 2.5.

In our testing of the latest all-wheel-drive Mazda 3 sedan, the switch from the base engine to the turbo version dropped its zero-to-60-mph run from 7.3 to 5.6 seconds. We haven't tested the CX-30 Turbo yet, but we expect a similar improvement over the regular all-wheel-drive model's 7.6-second 60-mph time, so a time around six seconds. That acceleration would make it among the quickest, non-performance-oriented subcompact SUV available. BMW, Jaguar, Mercedes-AMG, and Mini all sell small, sporty crossovers with around 300 horsepower but charge a five-figure upcharge over the CX-30 Turbo's $31,225 starting price. 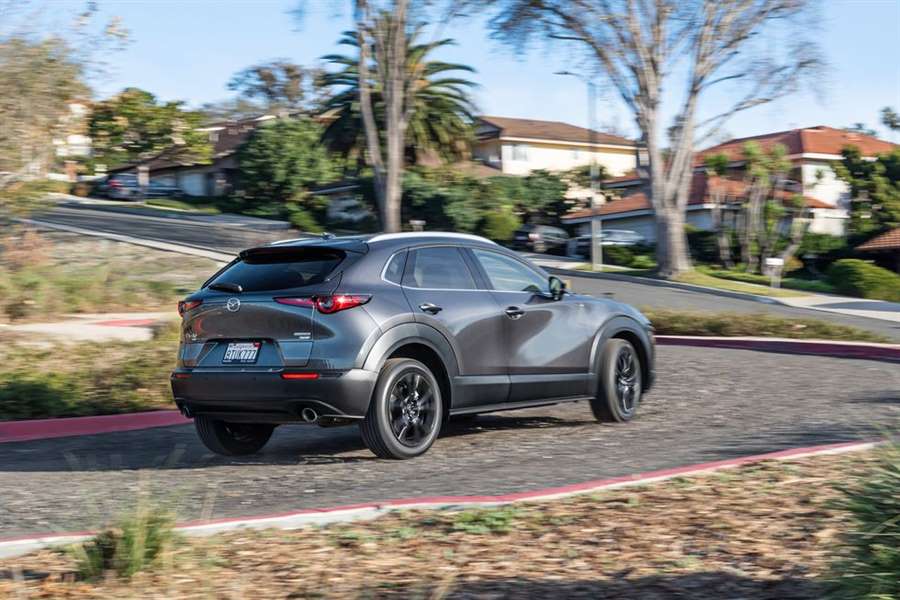 As in this turbo engine's other applications, it's backed by a smooth-shifting six-speed automatic transmission and Mazda's i-Activ all-wheel-drive system. Compared to the 3, the main difference here (and in other CX crossovers) is the addition of an off-road mode for stability-control and all-wheel-drive programming, which better distributes the engine's torque among the four wheels when traveling over slippery terrain. This doesn't make the CX-30 fit for serious trail work—Turbo models have only 8.0 inches of ground clearance and roll on 18-inch street-oriented all-season tires—but the off-pavement tuning should help it reach any secluded campsite that a Subaru Crosstrek can. 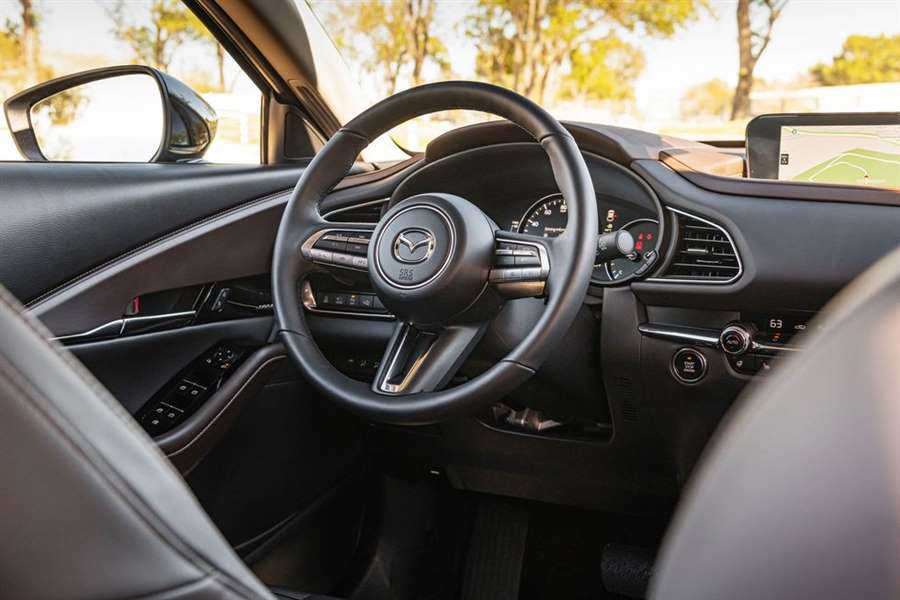 It's best to not think of the blown CX-30 as a hot rod. Mazda's turbo-four is all about the easy rush of torque and is happiest quietly grumbling along at low revs. All 310 pound-feet arrive at a mere 2500 rpm, and the big four tends to run out of steam by 5000 rpm. The six-speed transmission feels similarly sedate in its shifts unless you toggle its sport mode, which is smartly tuned to downshift and hold lower gears when cornering. Turning the CX-30's wheel off center reveals pleasantly linear responses and confidence-inspiring body control. This Mazda's sure-footedness at speed allows it to play along when spurred down a twisty road, but it's more comfortable to just cruise in its borderline luxury ambiance. If only a little less road noise seeped into its cabin at highway speeds. Ride comfort is generally compliant, although we did experience some unbecoming high-frequency jolts over some of Michigan's many potholes. 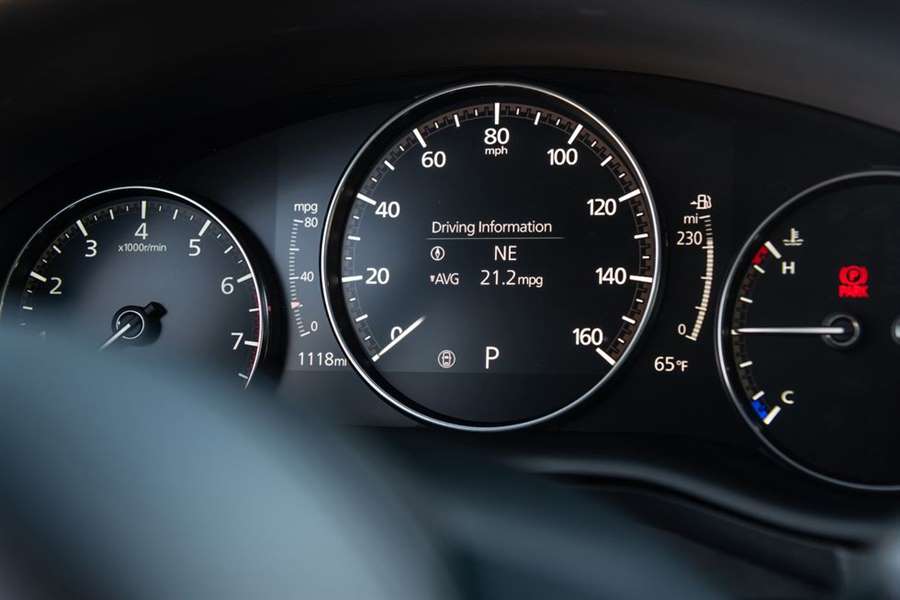 You can spot the CX-30 Turbo model by its black wheels and exterior mirrors, larger tailpipes, brushed-aluminum roof rails, and the discreet Turbo badge on its liftgate. Given this is only the CX-30's sophomore model year, not much has changed inside its finely tailored cabin. Supple leatherette upholstery is standard, as are a driver-focused control arrangement, a heated steering wheel and front seats, and Mazda's latest 8.8-inch infotainment system with a control knob on the center console. Although the CX-30's rear-seat passengers benefit from a touch more headroom than they would in the 3 hatchback, space in back is still tight for adults and the 20 cubic feet of cargo space is the same as a Mazda 3 hatch. 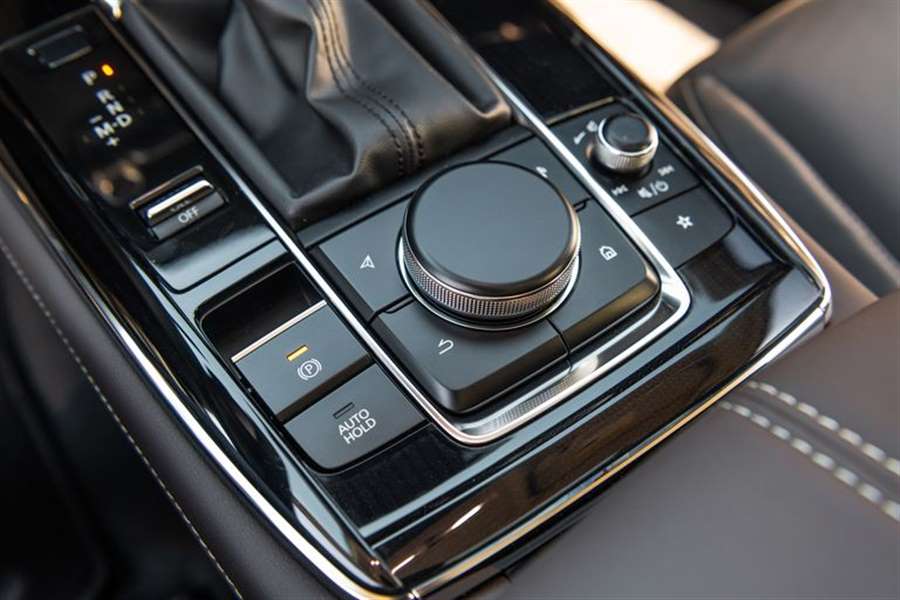 The fully loaded (and clumsily named) Turbo Premium Plus Package AWD version comes with features such as rear parking sensors, a higher-resolution 360-degree camera system, automatic reverse emergency braking with rear cross-traffic alert, and low-speed steering assistance for the adaptive cruise control. Along with a few accessory extras, these models flirt with $36,000. While the CX-30 Turbo's starting point equates to a small price advantage over a comparable Mazda 3 hatchback, the engine upgrade pushes the asking price precariously close to that of the 10Best-winning Mazda CX-5, which opens at $31,935 with the boosted 2.5-liter and is more accommodating of people and their stuff.

The addition of the turbo-four in the CX-30 rounds out what is a compelling overall package for a small, almost-luxury SUV, which should strengthen its position as one of Mazda's top sellers. Everything being equal—which they pretty much are between the CX-30 and Mazda 3 hatchback—we still prefer the latter for its better driving dynamics and sleeker shape. But for those looking for a subcompact SUV, the turbocharged CX-30 should be at the top of your list.