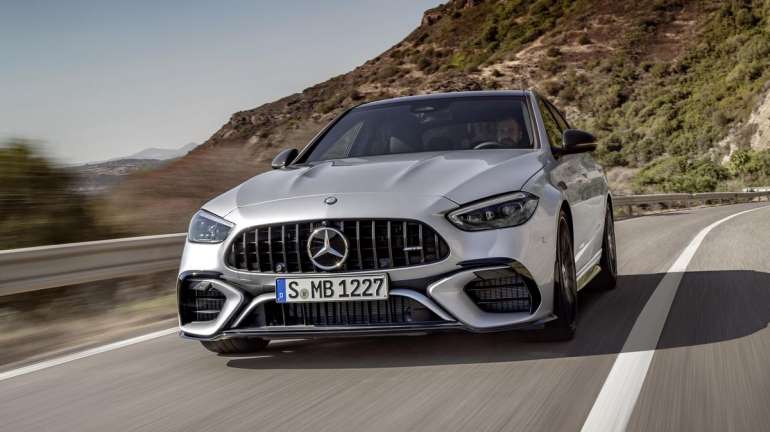 The high-performance variant of Mercedes’s entry-luxury C-class sedan will return as the 2024 C63 S, but this time it will get a radically different engine. The previous generation was powered by a twin-turbo 4.0-liter V-8 with either 469 or 503 horsepower, but this new-generation C63 will be motivated by a gasoline engine half that size: a 2.0-liter turbocharged four-cylinder that combines with an electric motor to making a whopping 671 horsepower in total. The new hybrid setup promises to improve upon the previous C63’s great performance, though the engine’s character will no doubt change radically. To help mitigate turbo lag, the downsized engine uses an electrically powered turbocharger system related to the one found in Mercedes-AMG’s Formula 1 race car. The rest of the package will be heavily based on the new C-class that debuted for the 2022 model year but with racier styling and a spruced-up interior. Mercedes-AMG has also confirmed that the junior C43 model will also return to the lineup, but we review that model separately.

Mercedes-AMG hasn’t released pricing yet but we expect the C63 to follow the new trim levels that launched with the 2022 C-class, starting with the Premium base trim at around $85,000 and going up from there. 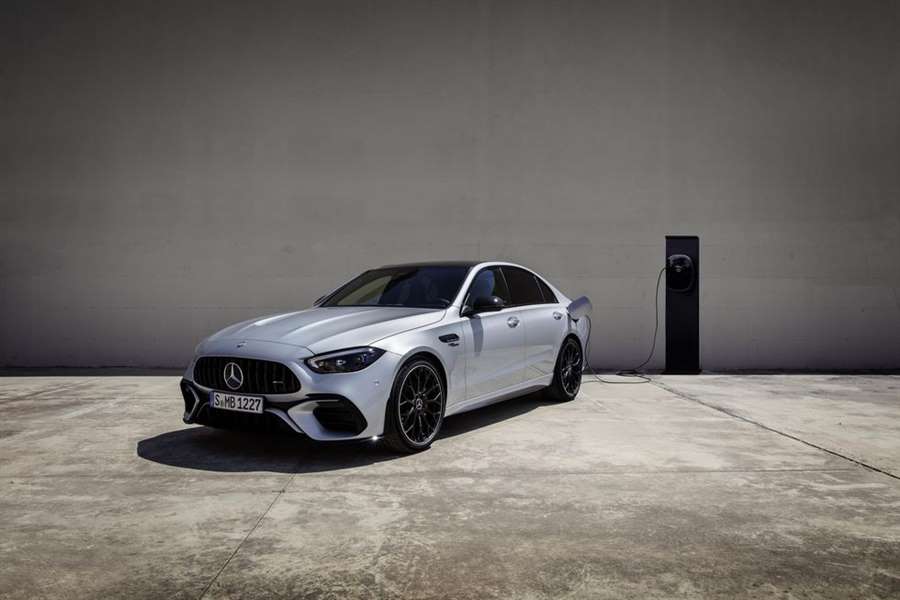 Gone is the old twin-turbo V-8 engine from the last-generation C63 and in its place is a turbocharged 2.0-liter four-cylinder. But before you get disappointed at an engine half the size of the old one, you should know that this inline-four will be augmented by a 201-hp electric motor and uses an electric turbocharger to reduce turbo lag. The new high-performance hybrid propulsion system will pump out a massive 671 horsepower, giving it an edge over rival to performance sedans such as the BMW M3 and the Cadillac CT4-V Blackwing, at least on paper. This setup allows for some limited all-electric driving, but only about 8 miles or so; its purpose instead is to provide similar performance to the outgoing car with better overall fuel economy. When we get a chance to test drive the new C63—which we are eager to do—we’ll update this story with driving impressions and test results.

The EPA hasn't released fuel economy figures for the 2024 C63 sedan yet. But due to the introduction of the downsized engine, we're expecting to see some fuel efficiency improvements over the outgoing model which was rated at 17 mpg city and 26 mpg highway. When we get a chance, we'll take the new C63 sedan on our 75-mph highway fuel-economy test route and update this story with its results. For more information about the C63’s fuel economy, visit the EPA's website. 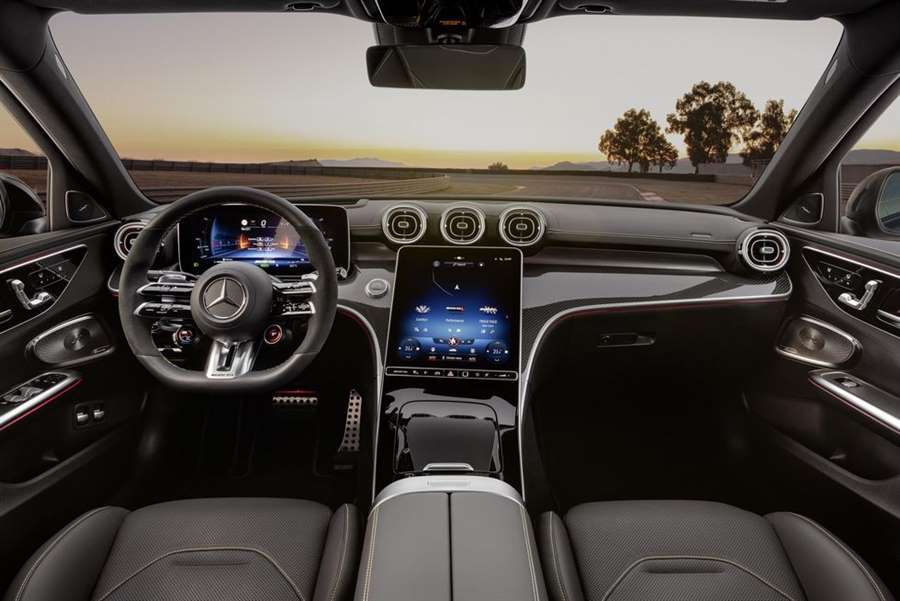 The C63’s cabin looks much like the standard C-class and junior AMG C43 model, but it sports unique upholstery and stitching patterns as well as AMG-branded sport seats with openings cut out to help save weight. Mercedes hasn’t detailed every feature and option, but we expect to see plenty of luxury and convenience items available, including a panoramic sunroof, heated and cooled seats, four-zone automatic climate control, and more.

All models will likely come with the same large 11.9-inch infotainment touchscreen that is integrated into the center console and canted slightly toward the driver in the C43 model. A 12.3-inch digital gauge display will also likely be standard. Apple CarPlay and Android Auto should both be standard for wireless connectivity, and a high-end Burmester stereo system is expected to be available too. 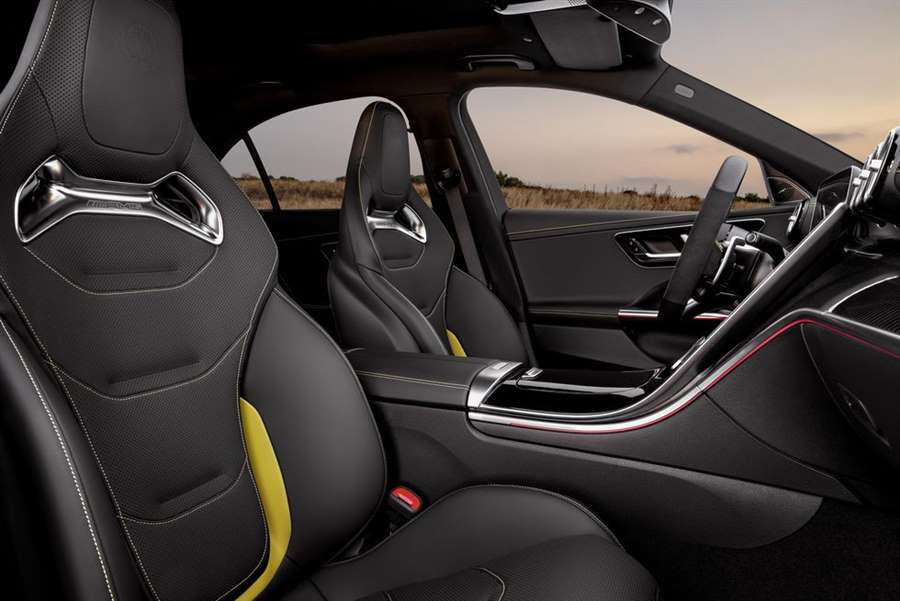 Like the C43, the C63 will likely offer a host of standard driver-assistance features but unfortunately, the car's coolest tech, which includes an adaptive cruise-control system that utilizes navigation data to adjust the vehicle's speed for upcoming curves and roundabouts, will probably remain an optional upgrade. For more information about the C43's crash-test results, visit the National Highway Traffic Safety Administration (NHTSA) and Insurance Institute for Highway Safety (IIHS) websites. Key safety features are likely to include:

Although rivals such as BMW, Genesis, and Volvo offer three years of complimentary maintenance, Mercedes-AMG omits that benefit from its standard warranty offerings. Otherwise, all new AMGs come with an industry-standard plan that covers most things for up to four years or 50,000 miles.

Tagged under
More in this category: « 2023 Mercedes-Benz E-Class Based On New Leaks And Spies World premiere: Electric Mercedes EQE SUV »